The winning images reveal the abundance, beauty, resilience and vulnerability of life on Earth. 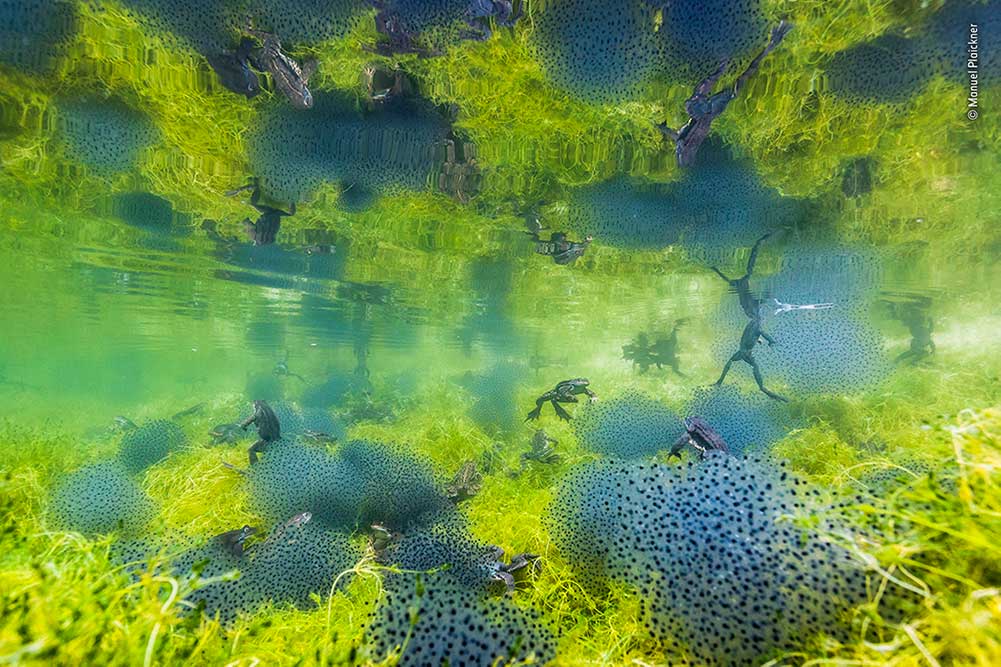 Every spring for more than a decade, Manuel followed the mass migration of common frogs. He took this image by immersing himself and his camera in a large pond where hundreds of frogs had gathered. There he waited until the moment arrived for the picture he had in mind – lingering frogs, harmonious colours, soft, natural light and dreamy reflections.

Rising spring temperatures bring common frogs out of their winter shelters. They head straight to water to breed, often returning to where they were spawned. Though widespread across Europe, their numbers are thought to be declining due to habitat degradation from pollution and drainage of breeding sites. 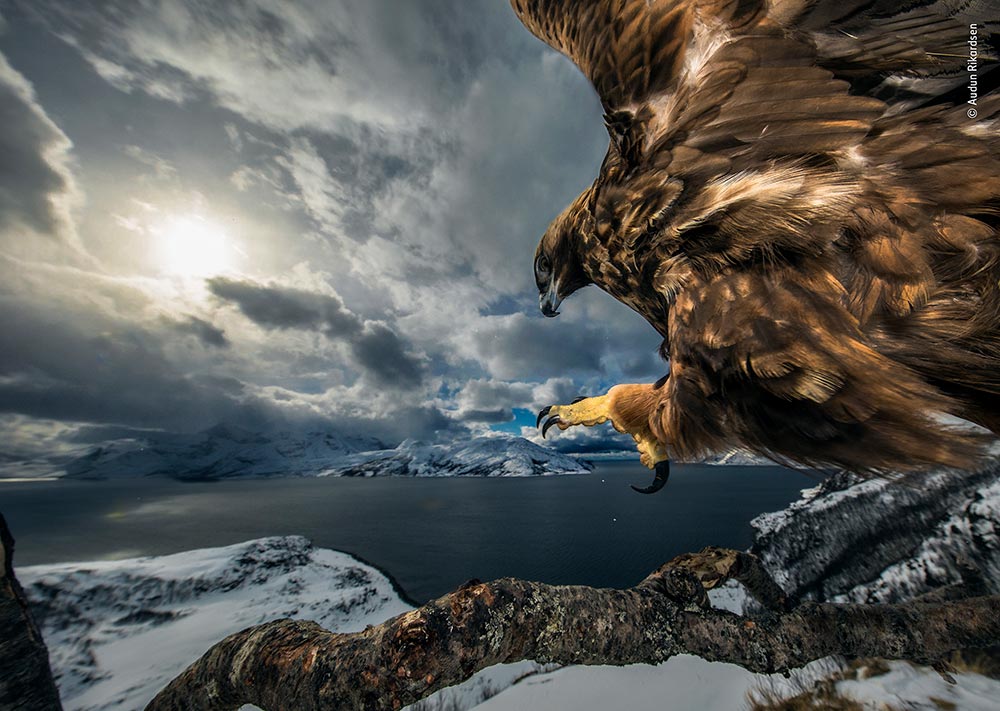 Audun carefully positioned this tree branch, hoping it would make a perfect lookout for a golden eagle. He set up a camera trap and occasionally left road-kill carrion nearby. Very gradually, over the next three years, this eagle started to use the branch to survey its coastal realm. Audun captured its power as it came in to land, talons outstretched.

Golden eagles typically fly at around 50 kilometres per hour but can reach speeds of up to 320 kilometres per hour when diving for prey. This, along with their sharp talons, makes them formidable hunters. Normally they kill small mammals, birds, reptiles or fish, but they also eat carrion and have been known to target larger animals too. 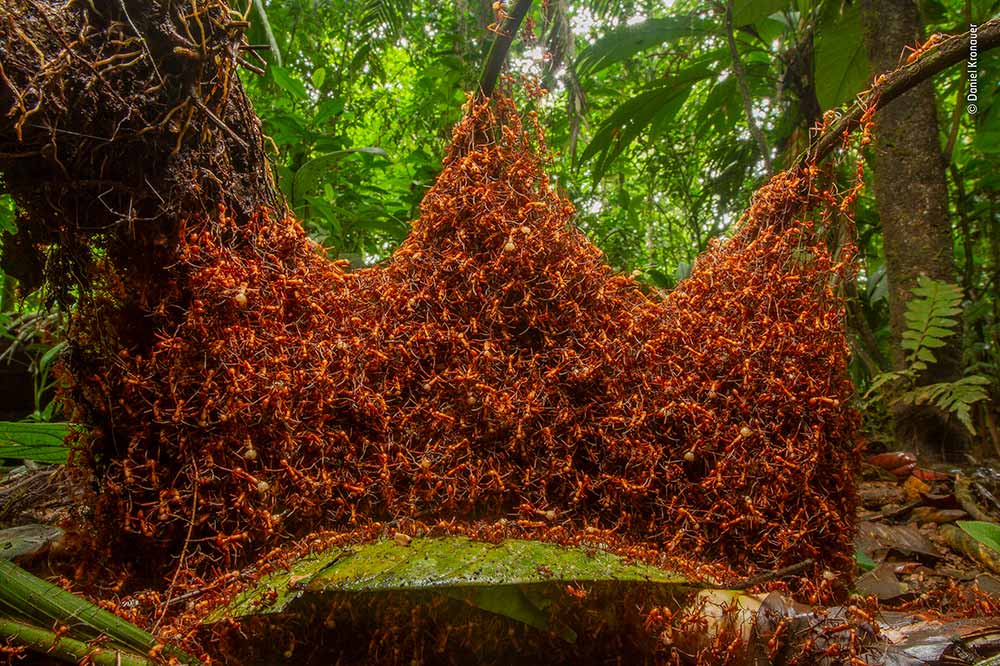 By day this colony of army ants raided their surrounds, mostly hunting other ant species. At dusk they moved on, travelling up to 400 metres before building a nest for the night. Positioning his camera on the forest floor, Daniel was wary of upsetting thousands of venomous army ants. ‘You mustn’t breathe in their direction,’ he says.

Army ants alternate between nomadic and stationary phases. These ants are in a nomadic phase, building a new nest each night using their own bodies. The soldier ants interlock their claws to form a scaffold while the queen stays inside in a network of chambers and tunnels. During the stationary phase they will stay in the same nest while the queen lays new eggs.

For more than 50 years, Wildlife Photographer of the Year has championed ethical wildlife photography while pushing the boundaries of artistic freedom, narrative excellence and technical skill. 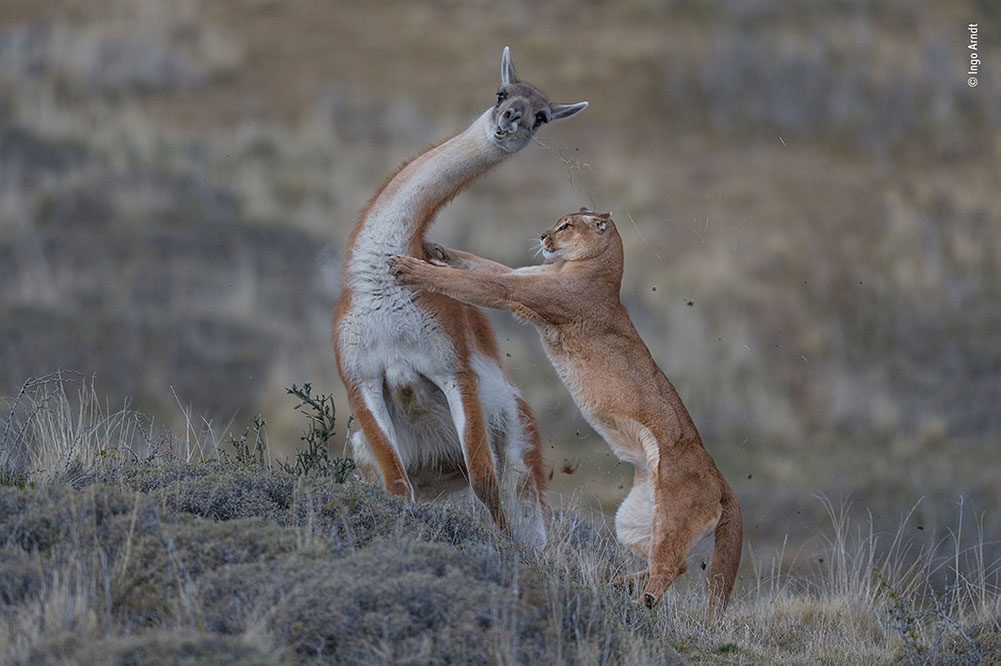 The guanaco turns, terrified, his last mouthful of grass flying in the wind as a female puma attacks. For Ingo, this is the culmination of months of work tracking wild pumas on foot, enduring extreme cold and biting winds. After an intense four-second struggle, the guanaco escaped with his life, leaving the puma to go hungry.

Because they are so abundant in Patagonia, guanacos are common prey of pumas. These big cats are solitary and hunt by patiently stalking before they pounce. Their robust hind legs allow them to take on animals bigger than themselves but they can also feed on smaller animals, such as rodents and birds. 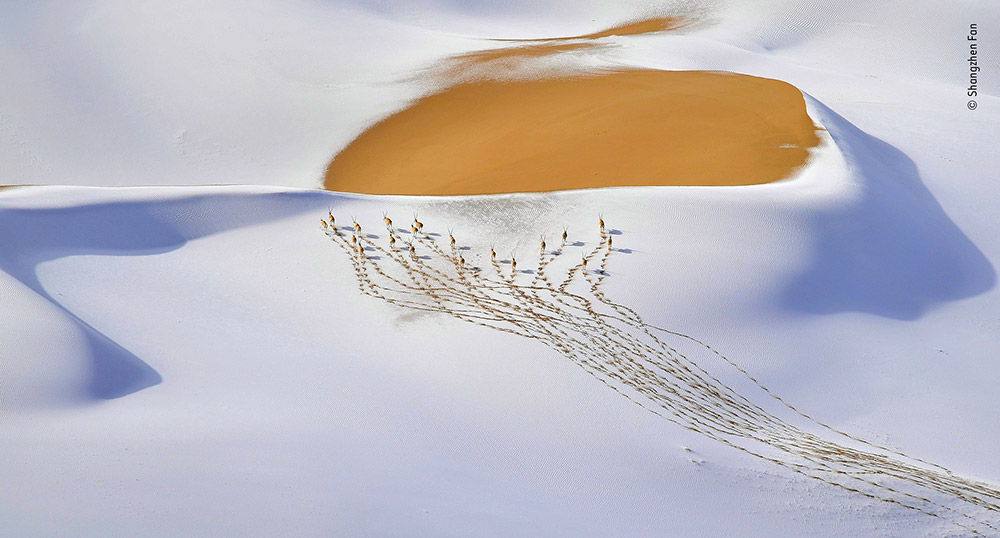 A small herd of male chirus makes its way to the relative warmth of the Kumukuli Desert. These nimble antelopes are high-altitude specialists found only on the Qinghai–Tibet Plateau. For years, Shangzhen made the long, arduous journey to observe them there. Here he drew the contrasting elements of snow and sand together.

Underneath their long hair, chirus have a light, warm underfur called shahtoosh. It grows tightly against their skin and can only be harvested by killing and skinning the chirus. Protection since the 1990s has seen their once-decimated numbers increase, but there is still demand – primarily from Westerners – for shahtoosh shawls. 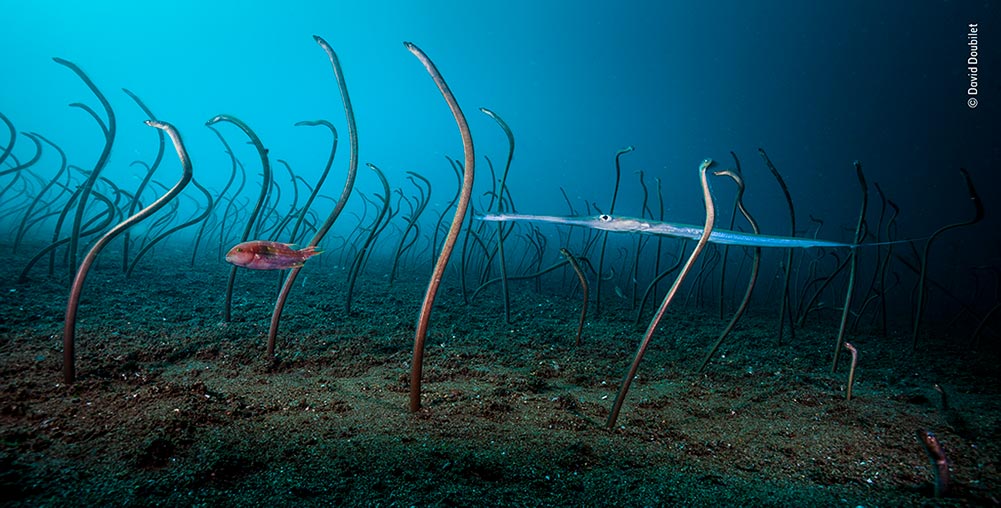 The Garden of Eels
David Doubilet, USA
Winner: Under Water

A swaying colony of garden eels vanished into their burrows as soon as David arrived at this underwater scene. So as not to disturb them again, he set up his camera and hid behind a shipwreck where he could trigger the system remotely. It was several hours before the eels re-emerged and several days before David got his perfect shot.

The eels were feeding on plankton drifting in the current and were undisturbed by a wrasse and a cornetfish swimming by. If threatened, garden eels retreat into their burrows. Like many other fish, they detect movement through their lateral line, a sensory organ that runs the length of their bodies. 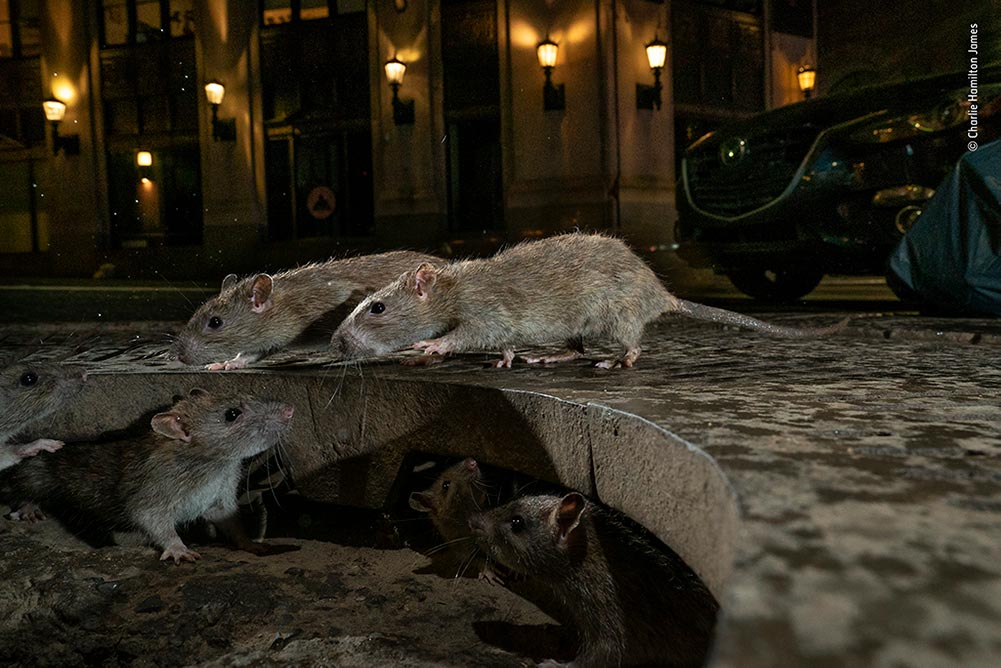 On Pearl Street in Lower Manhattan, brown rats scamper between their home under a tree grille and a pile of rubbish bags full of food waste. Lighting his shot to blend with the glow of the street lights and operating his kit remotely, Charlie captured this intimate, street-level view.

Urban rat populations are rising fast worldwide and their association with spreading disease in humans inspires fear and disgust. Rats are smart and capable of navigating complex networks such as subway systems. Being powerful swimmers, burrowers and jumpers makes these rodents particularly well suited to city living. 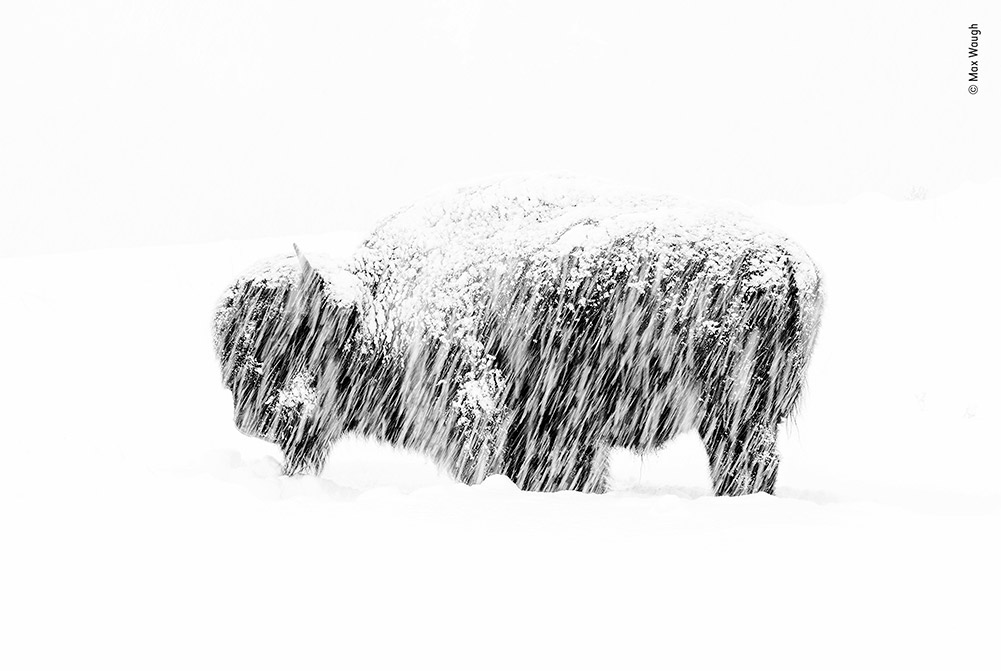 In a winter whiteout a lone American bison briefly lifts its head from its endless foraging. Max purposefully slowed his shutter speed to blur the snow and ‘paint lines across the silhouette of the bison’. Slightly overexposing the shot and converting it to black and white accentuated the simplicity of the wintry scene.

Swinging their huge heads from side to side, American bison sweep away snow with their muzzles to eat the grasses and sedges buried beneath. Originally a common sight, their largescale slaughter for meat and hides brought them close to extinction in the nineteenth century. But populations are recovering and wild American bison now thrive in national parks. 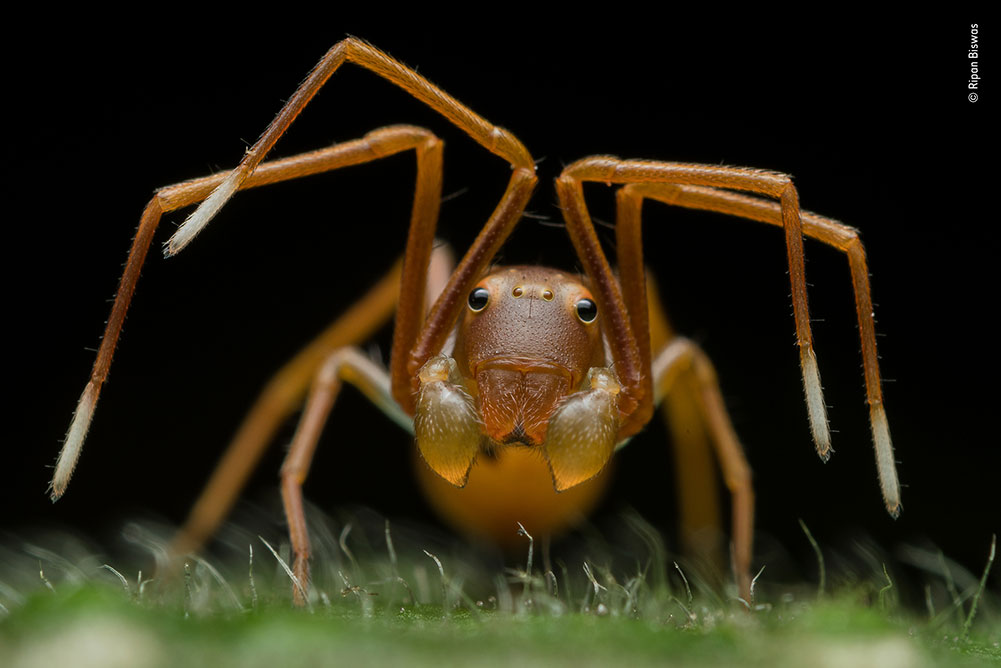 Ripan was photographing a red weaver ant colony when he spotted this slightly strange individual. It may have the face of an ant but its eight legs give it away – on closer inspection Ripan discovered that it was an ant-mimicking crab spider. By reverse mounting his lens, Ripan converted it to a macro capable of taking extreme close-ups.

Many spider species imitate ants in appearance and behaviour. Infiltrating an ant colony can help them prey on unsuspecting ants or avoid being eaten by predators that dislike ants. This particular spider, says Ripan, seemed to be roaming around the colony, looking for a solitary ant that it could grab for a meal.

Wildlife Photographer of the Year is developed and produced by the Natural History Museum, London.