Explore personal stories and accounts from those who served in 816 Squadron and operated Seahawks, including our own Tiger 75.

When the S-70B Seahawk was acquired by the Royal Australian Navy (RAN) in 1988 and 1989 from aircraft manufacturer Sirorsky, it was intended to be used for anti-submarine warfare and anti-surface surveillance/targeting. The nature of RAN operations during the 1990s and 2000s resulted in quite different forms of deployment for the Seahawk, as these testimonies show. Varying from sanction enforcement during the Gulf War, anti-piracy measures as part of Operation Slipper in the Middle East, and search and rescue support – the Seahawk has proven to be a versatile aircraft. 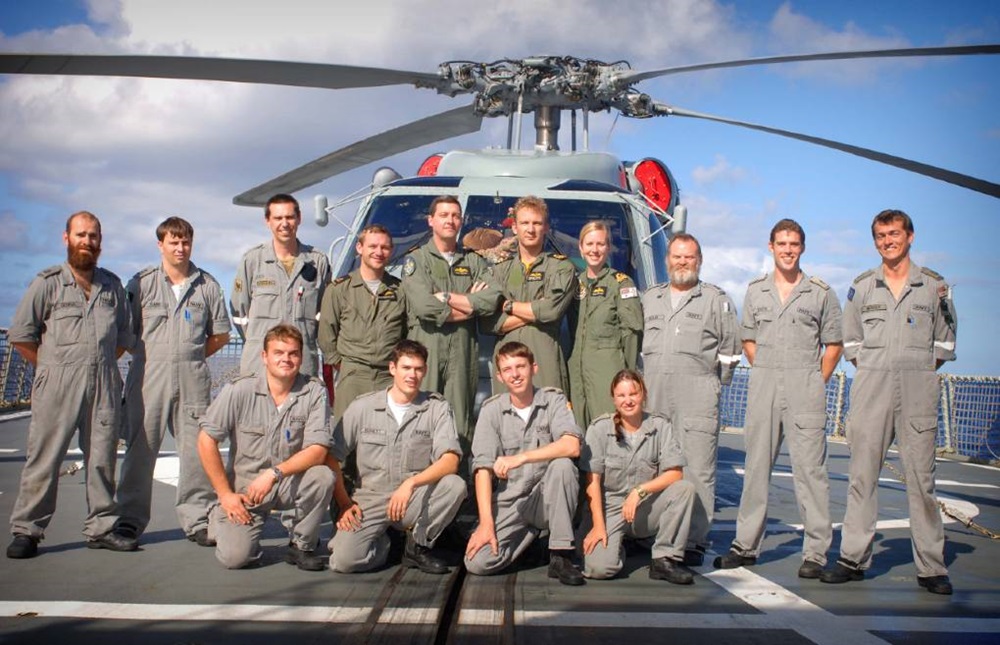 David Ostler (pictured fifth from left) standing among crew with Seahawk 71 during the RIMPAC exercise in Hawaii, 2006. Image courtesy of David Ostler


Bill Welling joined 816 Squadron in 1991 as a seaman maintainer, serving until 1999 and progressing to the rank of senior maintenance sailor. In 1993, Bill deployed to the Gulf aboard HMAS Sydney as part of Operation Damask VII (Red Sea). He worked with ADFA and 723 Squadron during the early 2000s, and returned to 816 Squadron as deputy air engineer officer from 2005–06.

David Ostler transferred to the Navy in 1994 as an army officer with flight experience piloting fixed wing Nomad planes. He joined 816 Squadron in 1996 and piloted Seahawks until 2008. David travelled to the Gulf in 1999 as part of Operation Damask IX, and was involved in the search for the missing Australian Army Blackhawk during the Fijian coup d'etat of 2006 (Operation Quickstep). He was further trained as an experimental test pilot, assigned to test the landing ability of various helicopters on newly commissioned ships.

Todd Glynn joined 816 Squadron as a Flight Commander in 2008. Todd has experience as a pilot and lead instructor with Seahawk, Sea King and Lynx helicopters, and has seen foreign deployments in the Falkland Islands, the west coast of Africa and the Gulf. In 2011 he was the Flight Commander of Tiger 75's deployment to the Middle East aboard HMAS Stuart as part of Operation Slipper. Todd is the current Commanding Officer for 816 Squadron, and manages over 252 personnel deploying the Seahawk capability both at sea and at HMAS Albatross on a daily basis.

Bill Welling and David Ostler discuss the adapted nature of the Seahawks role during the Gulf War.

David Ostler details the superior technological capability of the Seahawk in the Gulf for Operation Damask IX, and profiles an unusual cargo encountered while on surveillance patrol.