Discover Tiger 75 in action with Commanding Officer Todd Glynn, as he takes us through various operations and training exercises as part of 816 Squadron.

Todd Glynn joined the Navy in 1992 as a direct entry aviator. Initially flying Sea King helicopters, Todd transferred to the Royal Navy in 1998 to fly Lynx's. During this period he was assigned to HMAS Glasgow, and deployed to the west coast of Africa. Operating primarily off the coast of Sierra Leone, this mission was focused on combating piracy. Todd was later deployed to the Falkland Islands at a time of ongoing diplomatic tension between the UK and Argentina over sovereign claims to the archipelago. In 2001, Todd returned to Australia to undertake a Sea King instructor's role, before accepting a commanding officer position in 2008 with 816 Squadron.

In 2011 he was the Department Head (referred to as the Flight Commander), responsible for Tiger 75's deployment to the Middle East aboard HMAS Stuart as part of Operation Slipper. This deployment saw Todd's Seahawk team, or 'Flight' in Navy terminology, win the Collins Trophy – an award given to an embarked flight displaying a high-level of safety and proficiency. Todd is the current commanding officer for 816 Squadron, and manages over 252 personnel deploying the Seahawk capability both at sea and at HMAS Albatross on a daily basis.

Todd takes us through some of his memorable experiences with Tiger 75:

Our work-up or pre-deployment training was conducted off the east coast of Australia in an area called the Eastern Australian Exercise Area in the later part of 2010. It is a large area that encompasses Jervis Bay. We are expected to demonstrate proficiency in all our missions, and in this case we were preparing for an Anti-Submarine Warfare mission where a Mark 46 Mod 5 torpedo was required to be fitted to the aircraft. The aircraft can carry two of these weapons. The weapon shown in the pictures is a Practice Delivery Torpedo (PDT), designed to be loaded, dropped and recovered for training. This is why it's orange as it can be seen in the water more easily. 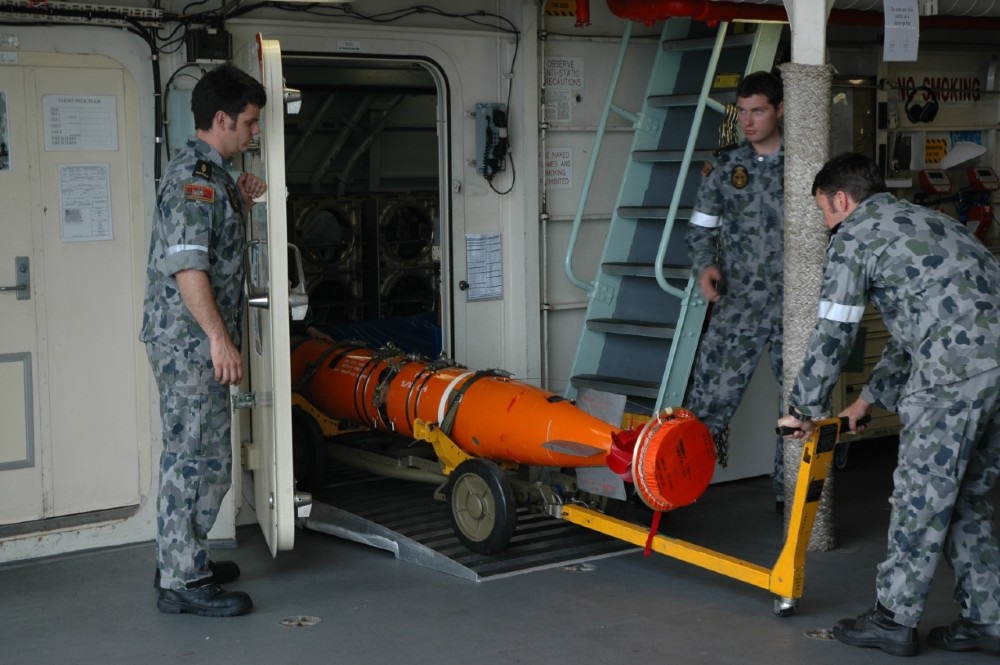 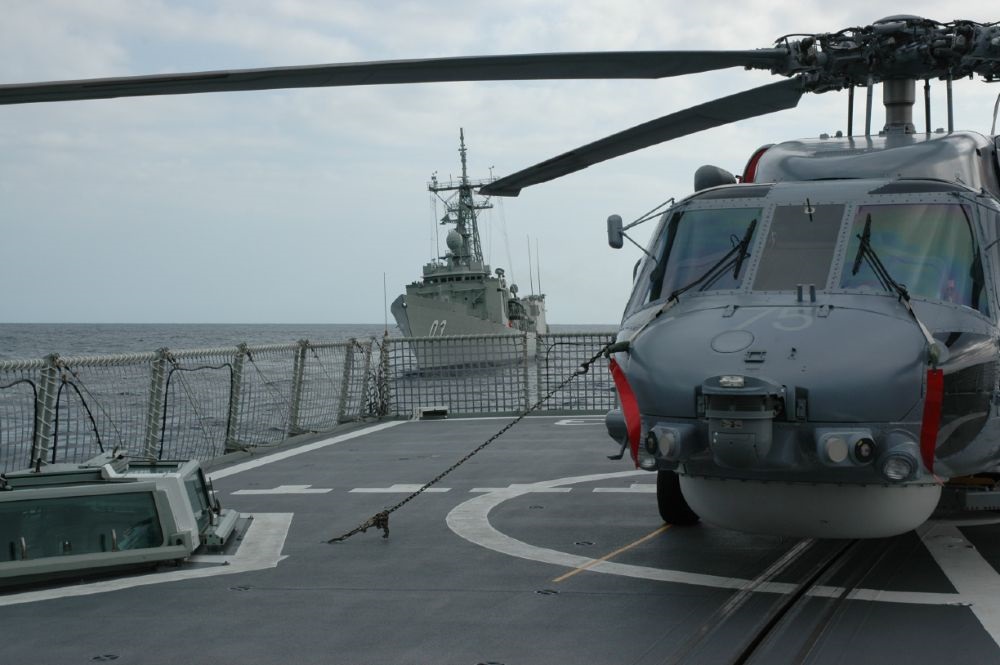 It takes the majority of the flight team to load a weapon. The sailor in control of the winch (Joshua Rutledge) wears a helmet with a face shield because the torpedo is held to the aircraft with a pair of metal bands. These bands are designed to spring clear and the weapons fall away. Should they fail they can cause someone significant damage, hence the need for head and eye protection.

The orange 'pimple' on the side of the aircraft is a Crash Data Recorder (you might know it as a black box). It is designed to jettison away from the aircraft should there be an accident. Aaron Fields is leading the evolution, monitoring the procedure is done in accordance with our publications. 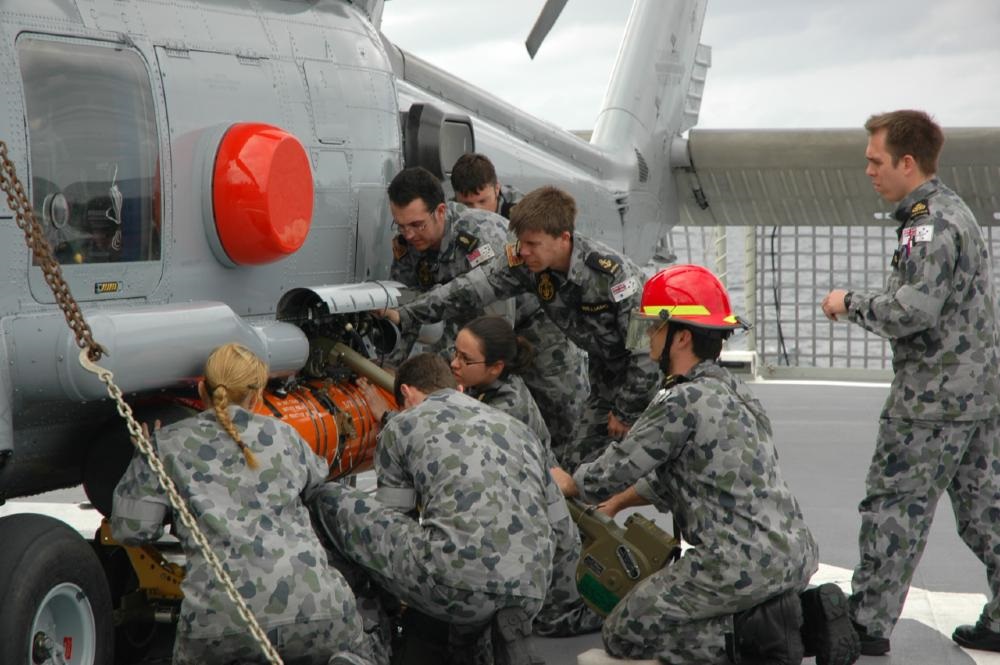 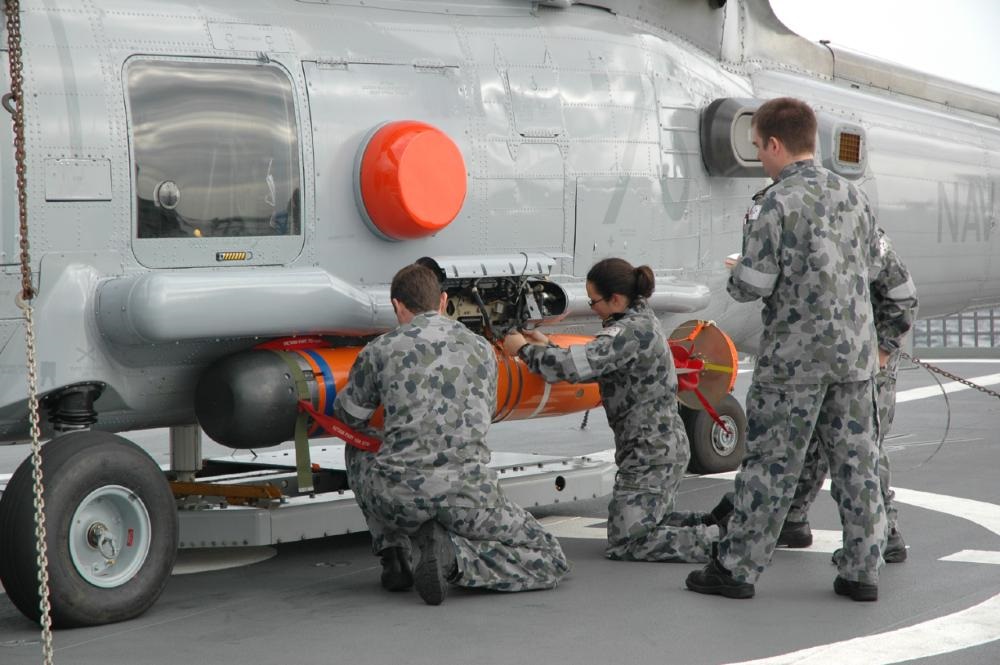 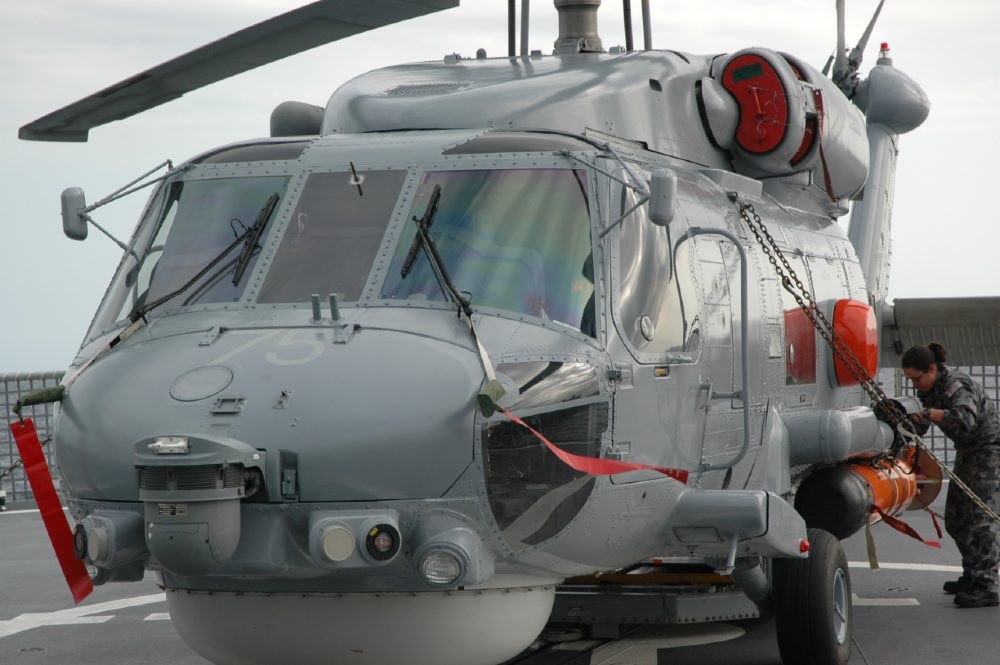 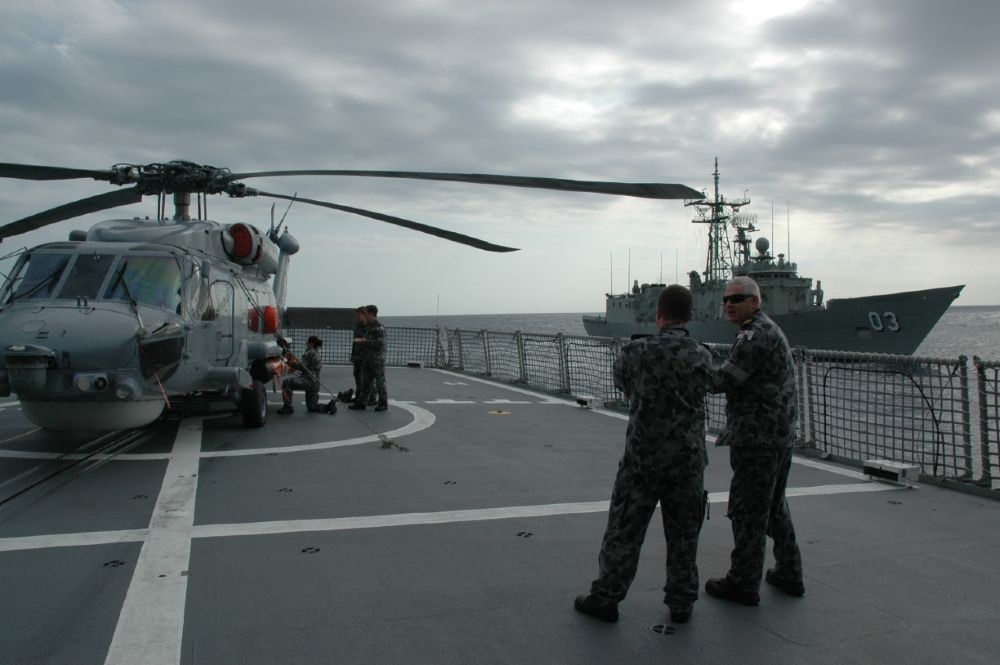 Vertical replenishment, or VERTREP, is a method of supplying cargo between ships using helicopters. VERTREP is often undertaken during a Replenishment at Sea (RAS). A RAS is where ships are positioned in close proximity alongside a tanker to enable hoses to be passed between ships so that fuel and water can be transferred.

VERTREP enables ships to be sustained at sea for long periods of time. In the Middle East Area of Operations (MEAO), our patrols were generally between 20-30 days, but could also be around 40 days so – the delivery of fresh food and vegetables was an important aspect of crew morale. Moreover, during extended seagoing periods, sensitive equipment can break so spare parts might need to be delivered to where the ship is.

The images below show a VERTREP that was conducted on 8 March 2011 during Patrol 2 (25 February to 26 March 2011) of Rotation 25 to the MEAO. We were in the North Arabian Sea. My notes suggest we were about to participate Exercise Aman with the Pakistani Navy and heading to Karachi. The vessels engaged are HMAS Stuart and USNS replenishment ship Joshua Humphreys. The majority of the replenishment vessels in the MEAO were United States Navy vessels operating as part of a combined task force from hubs such as the Port of Fujairah.

I remember these VERTREPs well, as majority of the time in the MEAO, the helicopters on board the replenishment ship conducted them. We therefore asked to specifically undertake these sorties for professional development, as we didn't want our skills to wane. 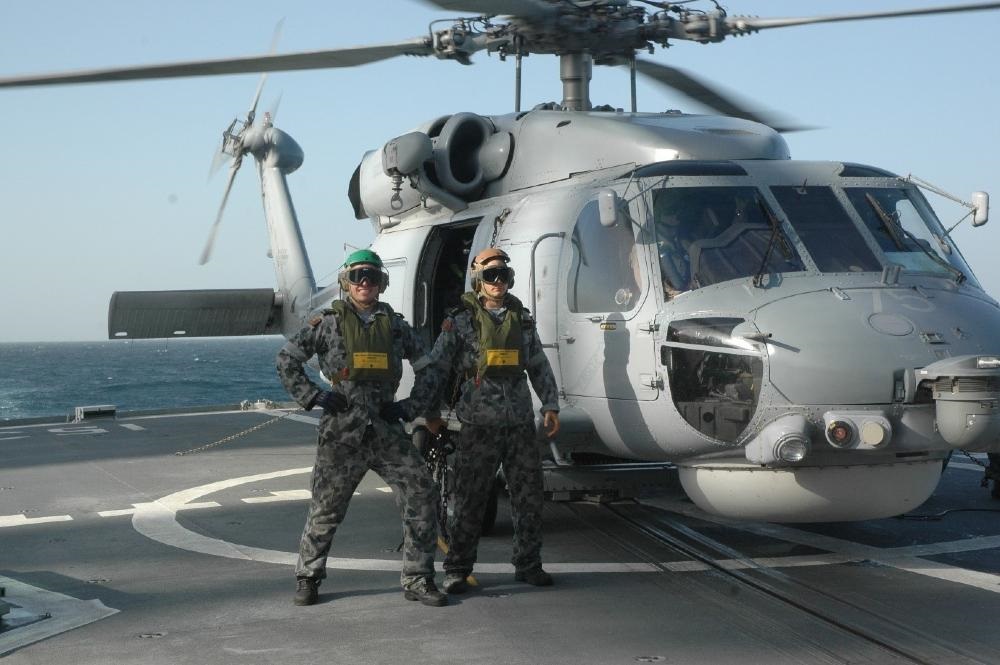 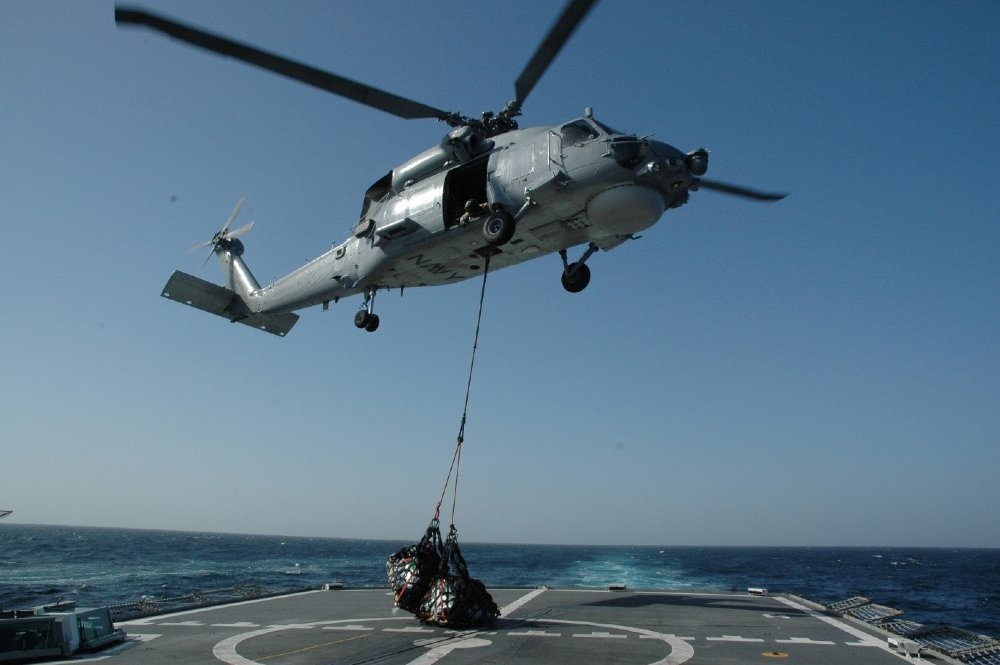 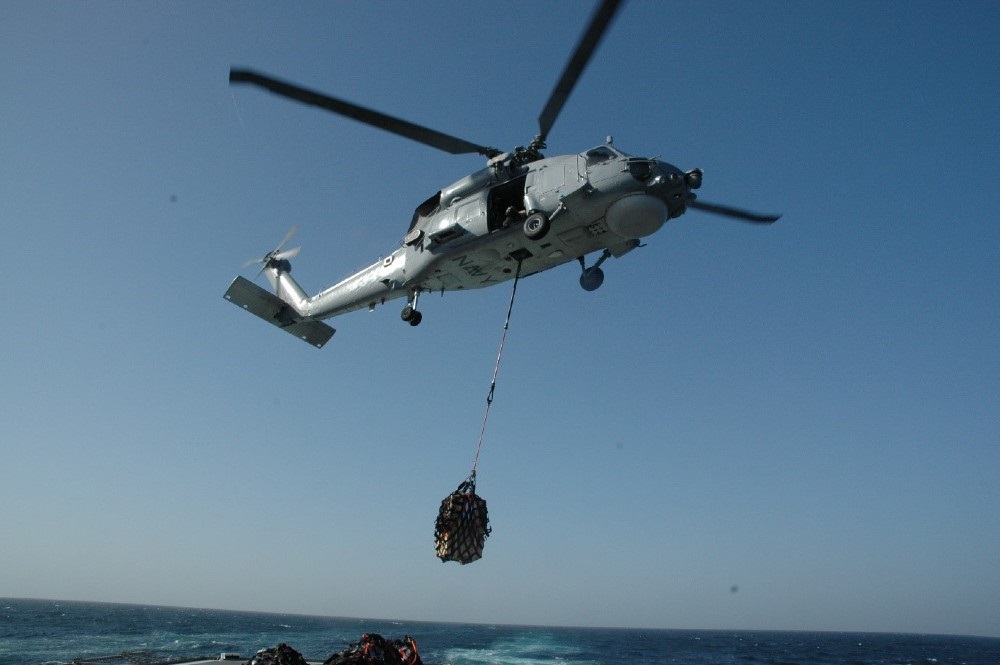 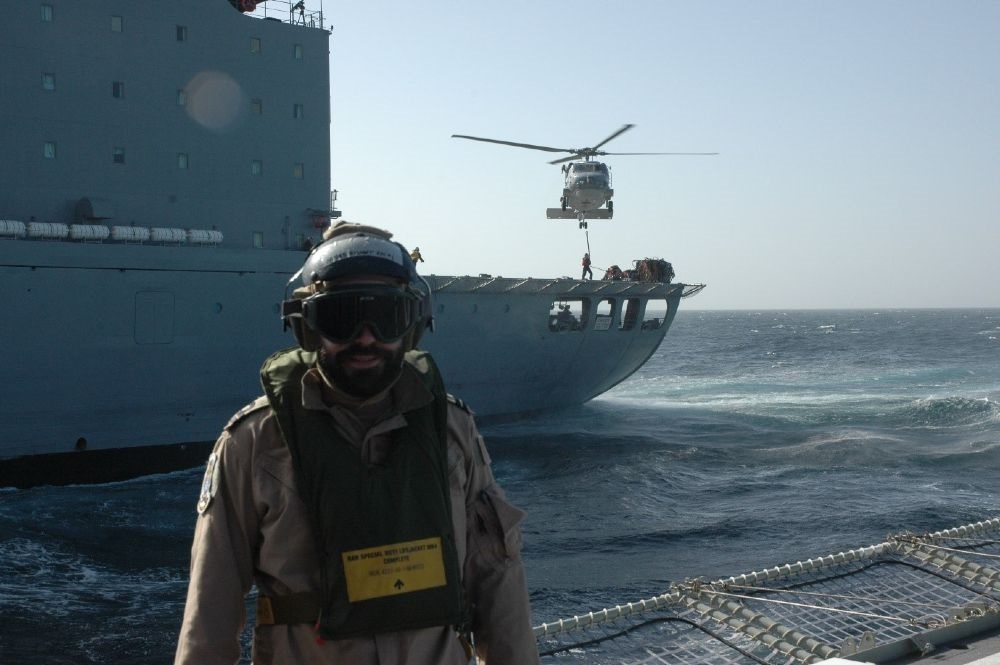 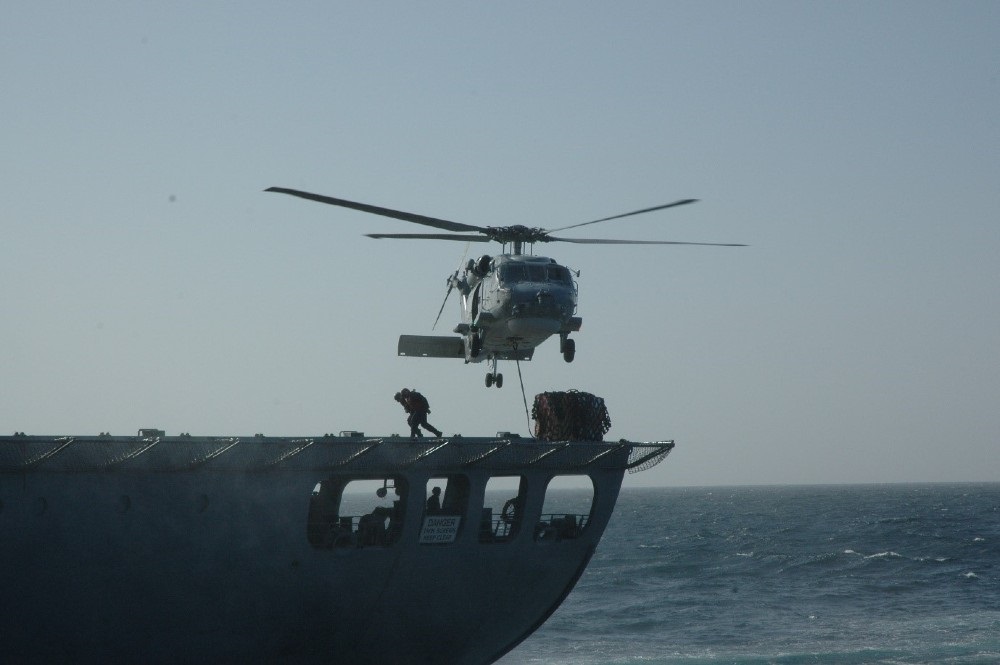 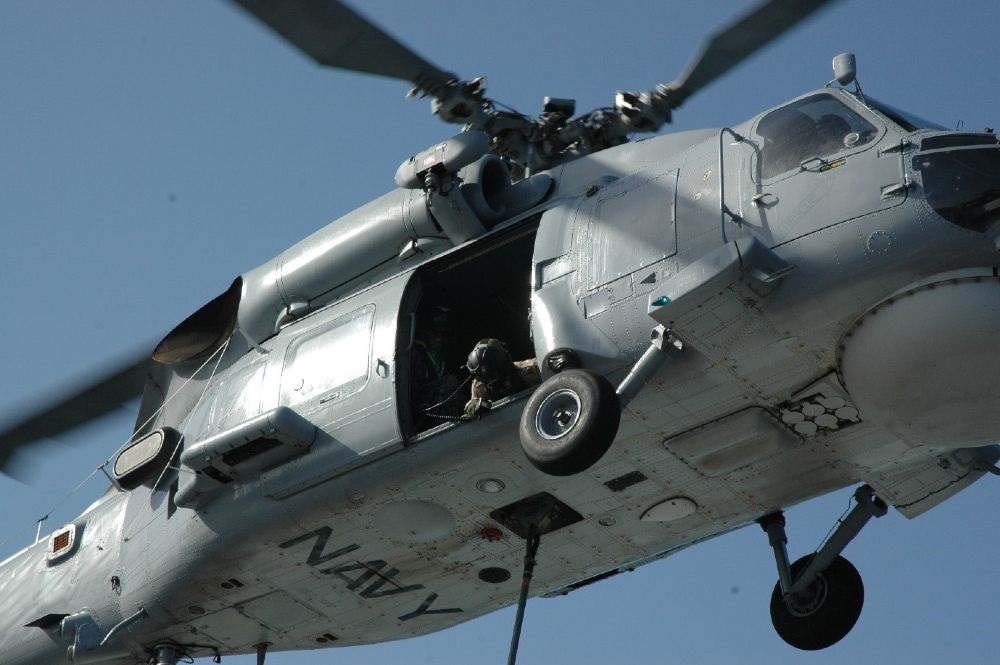 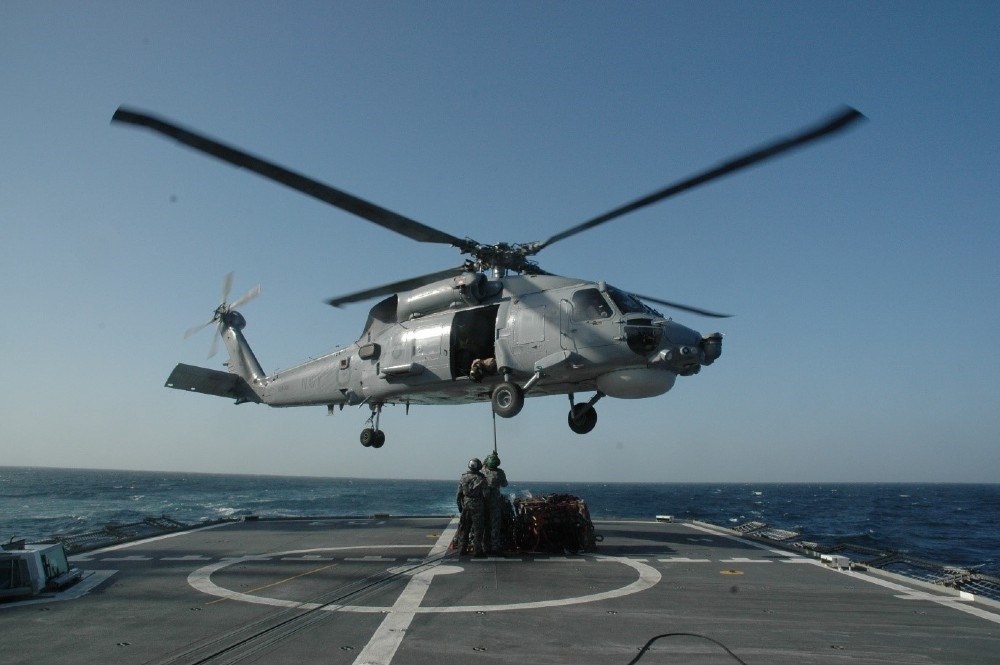 I can't forget the intensity of the exercise. There might be 20 to 40 pallets, so the team needed to be completely committed to breaking down the loads as quickly as possible. No one wants the ice cream to melt!

The most enjoyable part of the Operation Slipper deployment was twofold, firstly the opportunity to illustrate the Fleet Air Arm (FAA) as a contemporary organisation. For example, the FAA had committed to growing a night vision google (NVG) capability in the S-70B-2 Seahawk, but hadn't really taken it to sea on operations. We were the first flight team to deploy with equipment that allowed for secure high frequency communications and a new mission software. So to be trusted to deploy with these new capabilities was professionally very rewarding.

I also enjoyed the opportunity to see some of the most amazing wonders of the world such as the Dead Sea, Petra and the Gateway to India, before contrasting them with more modern aspects of the region such as Ferrari World, the Dubai Mall and Burj Khalifa.

When I started going to sea, communication with home was via letters and a phone call once we were at port – sometimes they included reverse charges! On this deployment however, Stuart had WiFi installed throughout the ship. This WiFi was unclassified so people could use their personal laptop or phone to reach their loved ones. As a new dad with my son only 18-months-old, it transformed the isolation that had originally made seagoing deployments so unique. 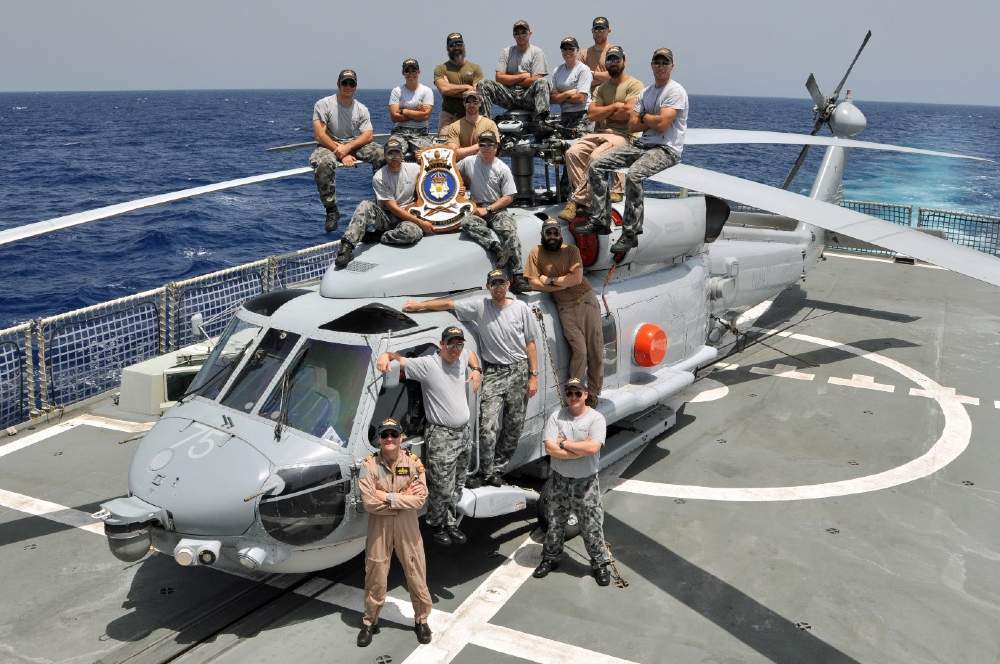 This photo shows the whole flight (10 maintainers and 6 aircrew) and Tiger 75 during our deployment. It was taken for the cruise book which is a tradition of collating details and memories of the deployment. You can also see the badge for HMAS Stuart in the photo.

We were the winners of the Collins Trophy in 2010 and 2011, a competition between deployed Flights of the Fleet Air Arm. 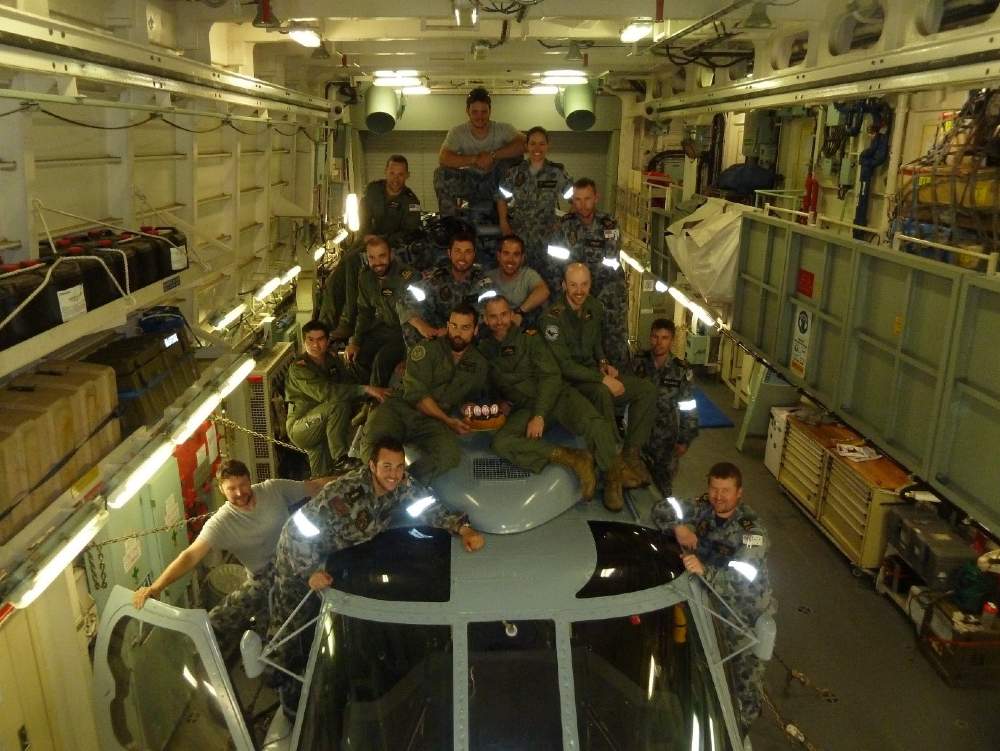 This image was taken to celebrate Tiger 75 ticking over 4,000 flying hours. It would not be a Navy celebration without a cake, so we had HMAS Stuart's chef bake one up for the occasion. The photo was taken in the hangar of the ship.