Weaving a message of sustainability

What inspires the Erub artists to turn ghost nets from ocean pollution into beautiful works of art?

These works show peoples connections to the sea and inspire awareness of ocean pollution, recycling and promote conservation of the marine environment.

A seemingly harmless piece of discarded fishing net, left to drift in the ocean can strangle a sea turtle travelling to its nesting ground. Sharks, fish and other marine life all over the world have also suffered similar fates through entanglement in fishing nets.

“The ocean holds all mankind together, we are all connected by it and we must look after it.”

Au Karem Ira Lamar Lu - Ghost Nets of the Ocean exhibition is the largest collection of ghost net art in the Southern Hemisphere. Many of these works have previously been displayed at the Oceanographic Museum of Monaco, the Asian Civilisations Museum in Singapore and the Tarnanthi Festival, AGSA.

Featuring colourful woven sculptures of turtles, sharks, sardines, coral and more, they carry a message from the Torres Strait for the world to heed: the oceans are connected to everyone. Humans everywhere are affecting the world's oceans.

Ghost nets are fishing nets that have been lost at sea, abandoned or discarded when they have become damaged. Along with sharks, turtles and other marine life, hard and soft coral reefs are also damaged by discarded entangled nets. Ghost nets are part of a larger problem that adds thousands of tonnes of plastic to the marine environment every year. These nets continue to float with the ocean currents, entangling marine wildlife and invisibly and silently killing - hence the term 'ghost' net.

Ghost Nets of the Ocean was created by artists from Erub Arts, Erub (Darnley Island), and non-Indigenous collaborating artists to highlight the irreparable harm that discarded nets cause, and to provoke reflection on how humans are affecting the world's oceans.

Erub, also known as Darnley Island, is one of 200 islands in Torres Strait. Located 160 kilometres north-east of Queensland's Cape York Peninsula, very close to Papua New Guinea, it is one of Australia's most remote communities, and home to about 400 Erubam people. The artists at Erub Arts draw their inspiration from their identity and connection to their totems through traditional and contemporary stories about their land, sea and family connections.

'I started making art seriously in 2002, and was a founding member of Erub Arts. I want to continue to make art that relates to my heritage and promotes our unique island way.' 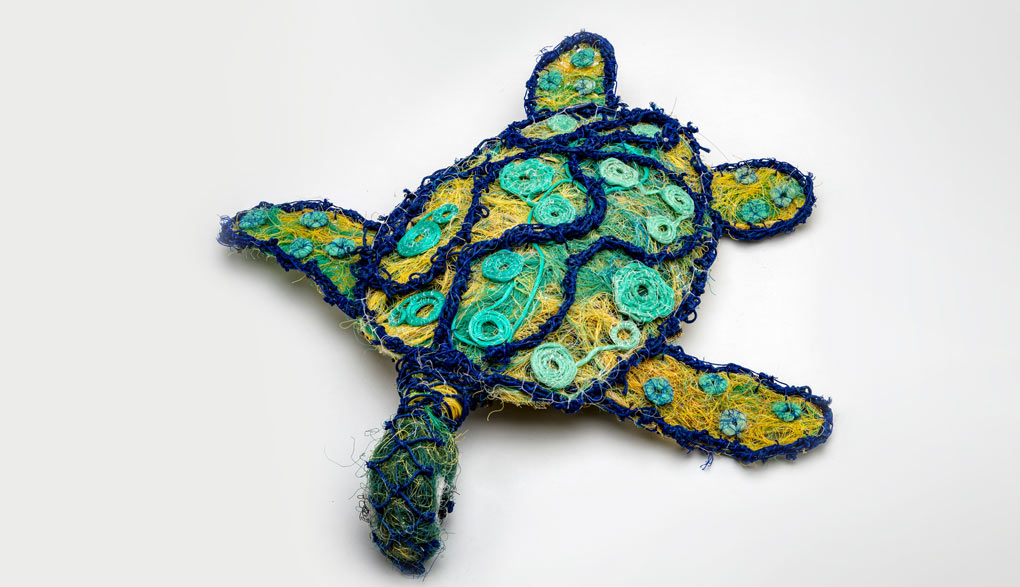 Second perhaps only to dugong, marine turtles are an important part of the natural and cultural landscape of the Torres Strait with six of the world’s seven species of marine turtle found in the regions. Turtles are the most common marine wildlife found entangle in ghost nets. Sea Rangers rescue and rehabilitate any surviving turtles found in the recovered nets. It is estimated between 4,000-10,000 turtles were entangled in nets over the last decade.

'My artwork gives me the opportunity to express the things that are important to me, my identity, and my culture.'

The fish are a representation of marine life in the seas of Erub. The blue striped snapper are an example of the transformation of something destructive and ugly into something uplifting and beautiful.

'I want to do things that represent me, my family, and my surroundings from beforetime to modern times.'

Explore some of the exhibition displayed in the museum's foyer

Corals are the back bones of reef ecosystems. They produce calcium carbonate skeletons that build coral reef framework. Reef fish and many other inhabitants depend upon corals for shelter and food. Art workshop coordinator Marion Gaemers is a veteran fibre artists that has collaborated with the Erub artists to create this intricate display of the detail of the vibrant colours and textures of the Erub coral reefs. 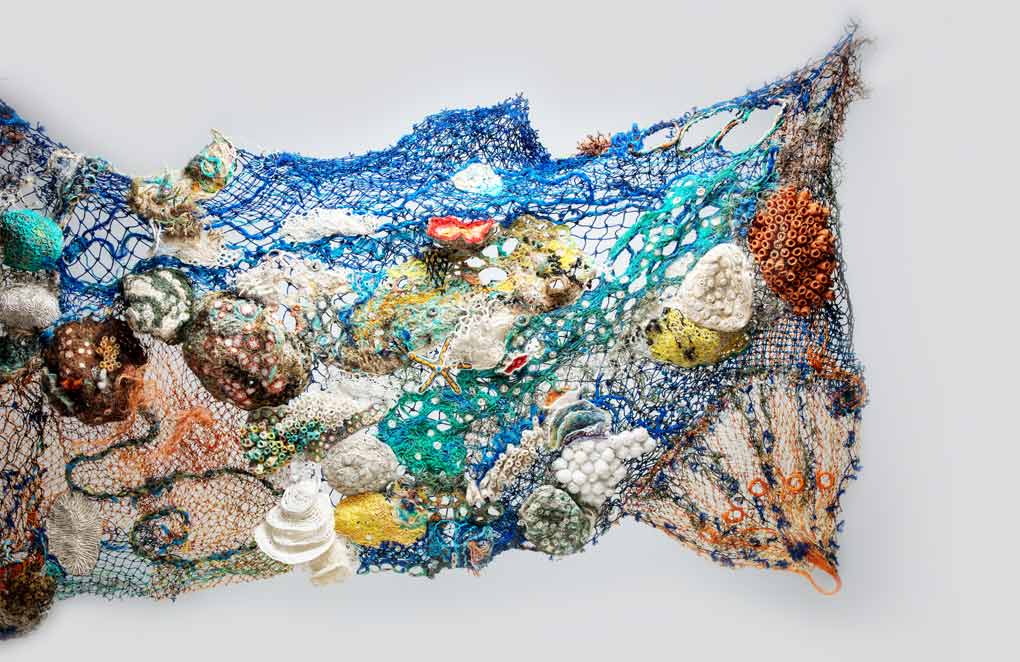 'Ghost net is a real menace to marine life. When you see the reef, you want to protect it. You want to pick up things and do something and make something out of it, anything and also something for yourself too.'

Some pieces of plastic debris can last for centuries and travel huge distances in the ocean. Whereas most plastic quickly decays into micropellets, which cause their own problems for marine ecosystems. Creating artwork such as the jellyfish is environmental activism raising awareness about marine life of Erub such as the jellyfish.

The Torres Strait is known for its dangerous waters and local islanders always check if it is good time to swim especially around jellyfish or ‘stinger season’. Appropriate swimwear such as t-shirt and shorts is always recommended when swimming in the Torres Strait and conventional swimwear is not considered appropriate. Fishing nets are made from nylon which is a type of plastic called polyamide. Polyamide is a general term given to any polymer linked amide group.

We all have a responsibility to help the planet – it’s the only one we have.

At the Australian National Maritime Museum, we’re working to save our oceans for future generations with new programs on marine environmental sustainability and ocean science (SOS). Two direct actions we’ve taken to reduce our impact are phasing out single-use plastics throughout the museum and installing the second largest set of solar panels in Sydney on the roof of Wharf 7.

Can you make a change and help save our oceans?

Been inspired by our Ghost Nets exhibition? Create and learn with our fun-filled arts and craft activities perfect for kids inspired by the exhibition. Learn about the challenges facing the marine life of Torres Strait and find out more about other inspiring indigenous artists in the museum store. 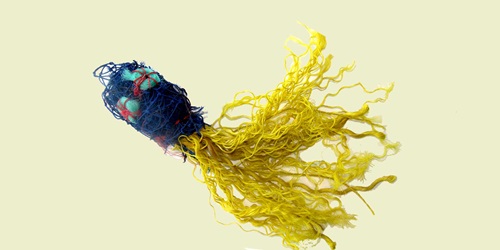 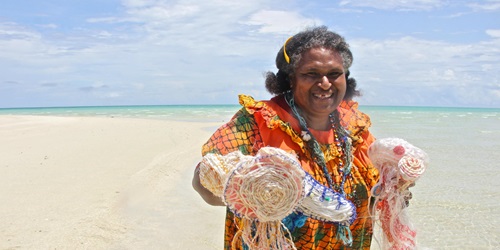 Erub Artists in their own words 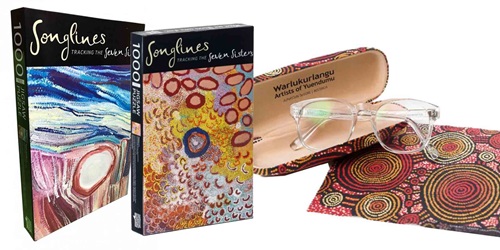 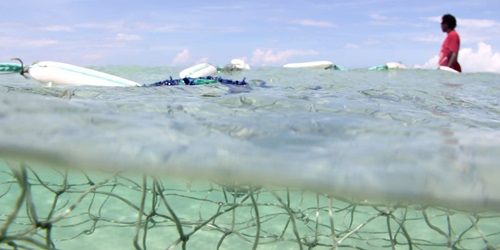 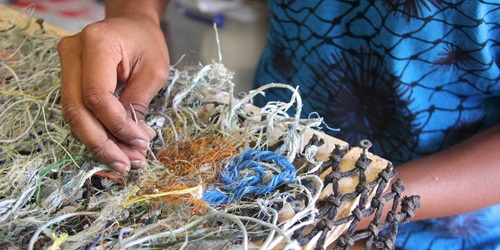 Au Karem Ira Lamar Lu - Ghost Nets of the Ocean
exhibition is part of the National Maritime Collection, and has been purchased through the Australian Maritime Foundation with the assistance of the Sid Faithfull and Christine Sadler program supporting contemporary Indigenous maritime heritage in Far North Queensland and the Torres Strait Islands, the Hon Justice Anthe Philippides JA and Peter Dexter AM.