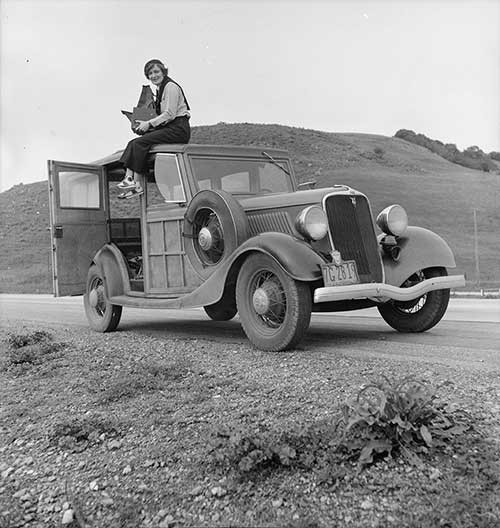 Dorothea Lange at work in the 1930s. Reproduced courtesy Library Of Congress 8b27245a.

“My own approach is based upon three considerations: First – hands off! Whenever I photograph I do not molest or tamper with or arrange. Second – a sense of place. I try to picture as part of its surroundings, as having roots. Third – a sense of time. Whatever I photograph, I try to show as having its position in the past or in the present.” - Dorothea Lange

Born in Hoboken, New Jersey in 1895, Lange studied photography at Columbia University then went on to a successful career as a portrait photographer in San Francisco.

As an early practitioner of documentary photography she used her large Graflex camera to record the dignity and desperation of Americans made destitute by the Great Depression. During WWII she turned her camera to the war effort on American streets, farms and shipyards and on the forced internment of Japanese Americans.

Using available light and aiming for a candid record she would make herself and her camera known to her subject and gauge their reaction before going ahead or walking away. It’s the fleeting intimacy of these unplanned encounters that still engages us today.

Lange died of oesophageal cancer in October 1965 while planning the first retrospective of her work at the Museum of Modern Art in New York. 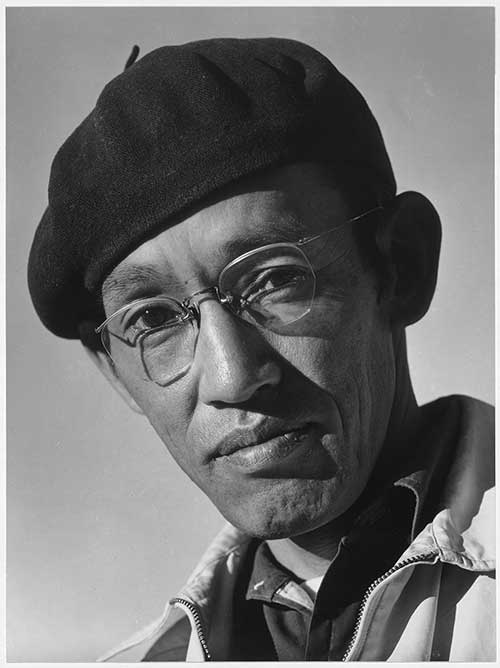 Born October 28 in Kagawa prefecture in Japan he migrated to the United States in 1909 with his mother and two brothers to join his father who had started a confectionary shop in Los Angeles's Chinatown.

Miyatake became interested in photography in the early 1920s as a means to support his first love of oil painting. He attended a photography school in Little Tokyo taught by master photographer Harry K. Shigeta, and subsequently studied with Edward Weston, who was to become his mentor.

Much of his early work was in the pictorialist style which emphasised tonality and composition to create photographic ‘pictures’.

Early in 1942, Miyatake, his wife and young family were interned in Manzanar camp as enemy aliens. He managed to smuggle a camera lens and film plate holder into the camp, and build a camera using film smuggled in by a hardware salesman and former client.

He eventually asked camp director Ralph Merritt if he could set up a photo studio, and Merritt, who learned about Miyatake from Edward Weston, consented with the provision that Miyatake only load and set the camera, and a Caucasian assistant snap the shutter.

Eventually Miyatake was designated official camp photographer. While interned he met and began a long collaboration with Ansel Adams, who had been commissioned by the US government to photograph the camp.

On their return to Los Angeles, Miyatake reopened his photo studio in time for Christmas 1945 and resumed his successful career..

Miyatake retired in 1960, but according to his son Archie, who took over the Little Tokyo studio, continued to carry a camera with him every day until his death in 1979.