Located in the water between the display pontoon and North Wharf pontoon just outside Action Stations, this work of art commemorates the loss, in the early months of World War I, of Australia’s first submarine AE1 with its 35 Australian and British officers and crew.

This was Australia’s first major loss of the war. So close to home it had a major impact on the public consciousness. The title of the work‘...the ocean bed their tomb’ is taken from a poem published in newspapers of the time by South Australian Anne Almer.

More than one hundred years later AE1’s loss and location remain a mystery.

The work takes the form of a wreath floating above the water, casting its shadow on its surface to the rhythm of the water’s movement, day and night. It is about reflection.

According to artist Warren Langley, “a burial at sea is not uncommonly accompanied by a floating wreath of flowers. In September 1914, in the early months of WW1 it is unlikely that the luxury of a floral wreath would have been available. The concept for this art work imagines an alternative, equally beautiful wreath constructed of floating twigs, branches and vegetative flotsam from the waters off Papua.

This is an art work about contemplation and reflection in both a literal and metaphorical sense.

In sunlight, the polished stainless steel structure shimmers and reflects its image upon the water surface. At night a concealed light source creates a complex optical intrigue of reflections.”

‘...the ocean bed their tomb’ is part of the ANMM collection and is supported by the Australian Government’s ANZAC Centenary Arts and Culture Fund. 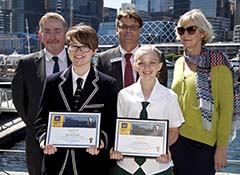 In a recent national writing competition for schools, Year 9 students were tasked with writing about HMAS AE1, Australia’s first submarine, lost without a trace with all 35 crew on 14 September 1914.

They were asked to think about the world in the context of 1914, the significance of the submarine’s loss and its relevance to the Anzac tradition.

The winners were Emelia Haskey, from St Dominic’s Priory College in South Australia, and Catherine McClymont, from Annandale Christian College in Queensland.

As part of the prize, the winners and their families were flown to Sydney to present their speeches at the unveiling ceremony of ‘… the ocean bed their tomb’, an art installation by Warren Langley, on 14 September 2015 – exactly 101 years after the disappearance of AE1.

This wreath-shaped form of stainless steel and light floats above the waters of the museum’s basin to commemorate the men who died, and who still lie in an unknown location off Papua New Guinea.

Emilia and Catherine spoke about commemoration, loss, duty, fear, reflection and thanks.

Tonight we remember the 35 people on the AE1 submarine that disappeared on September 14th 1914. The mystery that surrounds this tragic loss has puzzled many for generations and will continue to be remembered for years to come. Just recently a small part of the wing of a Boeing 777 plane was found in the ocean off the coast of the French island Reunion. This wing is suspected to be a part of missing plane MH370, which like AE1 vanished without a trace. Even though the plane has been missing for over a year we still continue to search for it. The AE1 has been missing for over 100 and yet we are still searching for it.

But why? Why search for it, why still remember after so many years? I believe it is because tragedy unites us. A great loss is always remembered because of its impact and its significance. That is what MH370 and AE1 have in common. Though they may be separated by many years, they both united Australians in grief. The disappearance of AE1 was the first major loss Australia had experienced in WW1 since it was highly unexpected and the submarine was never found.

The submarine left Blanche bay on the 14th of September 1914 at around 7 am and were sent out to patrol the St Georges channel. But by 8 pm AE1 and her crew had not returned to Simpson Harbour. After three days of searching the submarine had still not been found and the search was concluded. These men lost their lives serving their country. Leaving their families and home behind, to fight in a great war so that future generations could live in a safe and free country.

These men were husbands, fathers and sons. They wrote letters, made jokes, obeyed orders and did their jobs. How ordinary they seem, yet how extraordinary have they become. September 14 touched the hearts of the entire country and still touches us now. We lost many good men and women in World War One over a conflict that spanned just over 4 years. Every country, every city, every suburb was effected. Both sides lost millions of lives. The soldiers who fought in this war fought for their values and ideals, but most of all they fought for freedom. The ANZACS are heroes because they loved their country more than anyone. They died for their country as did the members of AE1.

To remember them this beautiful sculpture ‘The Ocean Bed Their Tomb’ has been created. This fantastic artwork that has been so lovingly made does more than just honour the members of AE1, It gives us something to be proud of. We can be proud of the boys of AE1, their descendants, the amazing people who built this artwork and the ANZACS who served our country. To a quote a letter from Sydney Morning Herald article published in September 1914 ‘They obeyed their orders. And they died in that obedience. They gave their lives for King and for the Empire as surely and as unhesitatingly as though the AE1 had sunk, bows toward the enemy, rent and shattered from stem to stern beneath a crashing rain of shells.’

Reflection. What do you think of when I say that powerful word? I am confident that most of you would have a similar answer: ‘YOU’. What you see when you look in the mirror? However, I want to talk about a different kind of reflection. I want to spend some time reflecting on the lives of 35 men, 35 heroes. 35 selfless and inspiring Australians. 35 courageous men who were willing to do what was right is the face of personal danger to ensure the freedom of our great nation. 1 submarine, 35 men, 35 heroes.

In 1910 the Australian Prime Minister Alfred Deakin, ordered two E-Class submarines from England. The AE1 and the AE2. In August 1914, World War 1 broke out. In September that same year the AE1 submarine, alongside the HMAS Parramatta, were sent out as part of the Expedition Force to New Guinea.

Two weeks passed in the New Guinea campaign. The 35 crew members were struggling in the hazy weather beneath sea level. The 3 officers and 32 sailors were led by Lieutenant-Commander Thomas Fleming Besant. ‘Oh, yes, It’s dangerous if you want to look at it like that. But it’s got to be done’, Besant is recorded as saying. ‘And every man in the Navy, no matter what branch he is in, has to be prepared to meet danger when it comes’.

It wasn’t long before Besant was faced with the danger he had spoken of. On the 14th of September at 0230 hours the HMAS Parramatta reported the AE1 was in clear site. ‘What is the distance of visibility?’ the AE1 enquired. The HMAS Parramatta responded: ‘About 5 miles’ Less than an hour later, the AE1 vanished and after years and years of searching, it is still lies buried beneath the unforgiving waves.

That year 35 knocks would have been made on 35 doors of 35 unsuspecting households. 35 families would have been left heartbroken, hoping and praying that somewhere, somehow they would be reunited with their lost loved ones. Families with one less brother or son, children left fatherless, wives left widowed.

When we lose someone we love a ceremony traditionally takes place. A ceremony of remembrance and tribute. We as Australians celebrate the memory of our fallen soldiers, our war hero’s on ANZAC Day and Remembrance Day, days to pause and remember those who risked their lives in order to protect Australia and its allies.

We stop and listen to stories and speeches that make us contemplate. We watch a wreath being laid so we don’t forget. But now we have something new, something beautiful, a stainless steel construction of floating twigs, branches and vegetation. The Ocean Bed their Tomb. This wreath was designed for busy Australian who need to stop, take a moment and reflect on the 35 heroes who perished onboard the AE1.

I want to draw your attention back to that beautiful word, reflection.

My father was in the Army; he served our country in Afghanistan and PNG. When he came home I cried, when he left home I cried. I could not even begin to imagine what it would feel like to hear the news that he would not be coming home. Imagine getting that knock on the door.

I believe the crew of the AE1 would have strove to uphold the 5 Navy Values. Honour, Honesty, Courage, Integrity and Loyalty. The Ocean Bed their Tomb.  Reflect, pause, ponder and remember our naval heroes.