Ever wondered if shark repellent actually works, or if sharks can hear sounds underwater?

In this lively discussion with three of Australia’s leading shark ecologists, discover how humans and sharks interact, including findings from an experiment where jazz music was played to Port Jackson Sharks, learn how sharks are tracked with acoustic receivers and ponder the question - if sharks were humans what personality type would they be?

This Ocean Talk is presented in partnership with the Sydney Institute of Marine Science.


Note: Ticket includes light refreshments and exclusive access to the On Sharks & Humanity exhibition between 5 - 6pm.

Dr Catarina Vila-Pouca has always had a passion for sharks. She thinks sharks are fascinating creatures, and that the fear they instigate comes from knowing very little about their behaviour and intelligence. Catarina was an Endeavour fellow and obtained her PhD at Macquarie University investigating the learning abilities of Port Jackson sharks and whether these might be affected by future ocean warming. Her main research interests are fish behavioural ecology and its links to cognition.
Read our interview with Catarina 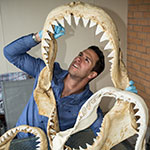 Associate Professor Charlie Huveneers leads the Southern Shark Ecology Group (SSEG) at Flinders University. The SSEG research focuses on the ecology and population status of sharks and rays, as well as assessments of their vulnerability, interactions with humans, and related public perceptions. After Charlie obtained an PhD in 2007, he started co-running the Animal Tracking Facility (ATF) of the Integrated Marine Observing System program (IMOS), creating a national network of acoustic receivers. He moved to South Australia in 2009 to join MISA through a joint position between SARDI – Aquatic Sciences and Flinders University where he acted as shark ecologist and lecturer between 2009-2014. He has been a full-time academic at Flinders University since, with his current research focusing on minimising the effects of wildlife tourism through adequate management and providing studies to support sustainable fisheries. 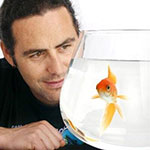 Professor Culum Brown has a sweet spot for Australian native fishes. Culum’s main focus is comparative cognition with interests in learning and memory, cerebral lateralization and personality of sharks. He is primarily interested in fish behavioural ecology and evolution, particularly in the context of conservation biology. Culum was editor of ‘Fish Cognition and Behaviour’ published in 2006 & 2011 by Wiley-Blackwell and assistant editor of ‘The Journal of Fish Biology’. 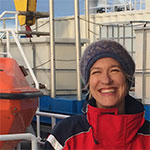 Emily Jateff is the Curator of Ocean Science and Technology at the Australian National Maritime Museum.

She is also a maritime archaeologist and marine science education advocate. Emily is passionate about the ocean sphere and its inhabitants (finned, legged or otherwise powered), and is busy plotting her next deep sea adventure.

Ocean Talks: Moments That Took My Breath Away