Earth’s oceans were home to some of the largest, fiercest and most successful predators ever. While dinosaurs ruled the land, giant reptiles and sharks hunted the depths.

Returning for a limited season, our hugely popular Sea Monsters exhibition combines real fossils from millions of years ago, gigantic replicas including a 13m long Elasmosaurus and 9m Prognathdon, hands-on interactives to make your own monster, dress ups, dino poo and much more!

What can their fossilised bones tell us about how they lived?  How do they compare to today’s top ocean predators? Discover the secrets of these monsters of the deep in this new exhibition that will delight all ages!

"Grandchildren aged 6, 7 and 10 loved our visit. So much to see and do, especially the activity centre... Recommended for a family outing."

Included in the See It All Ticket

Ancestors of three types of ancient reptiles left the land and colonised the seas. They were ichthyosaurs, plesiosaurs and mosasaurs. These three groups developed into awesome sea monsters that make today's great white sharks seem small.

Are you ready to meet them?

Ichthyosaur (pronounced: ick-thee-o-sore) means ‘fish-lizard’. They were the first major group of reptiles to go back to the sea, where they ruled for nearly 150 million years.

There have been lots of different shapes and sizes of icthyosaurs. Early versions had long, bendy bodies, but over time they became more streamlined, with compact, rigid bodies and crescent-shaped tails – like tuna and sharks. They developed more bones in their flippers to stiffen them and used them for steering. Their powerful tails made them the fastest marine reptiles – some could swim as fast as 40 kilometres per hour.

Ichthyosaurs were great hunters. They had large eyes to see in the dark depths and lots of teeth to snap up slippery prey. Like dolphins, they breathed air, gave birth to live young and were probably warm-blooded.

They were discovered by children – Mary Anning was 12 when she and her 15-year-old brother Joseph found the first complete fossil in 1811. 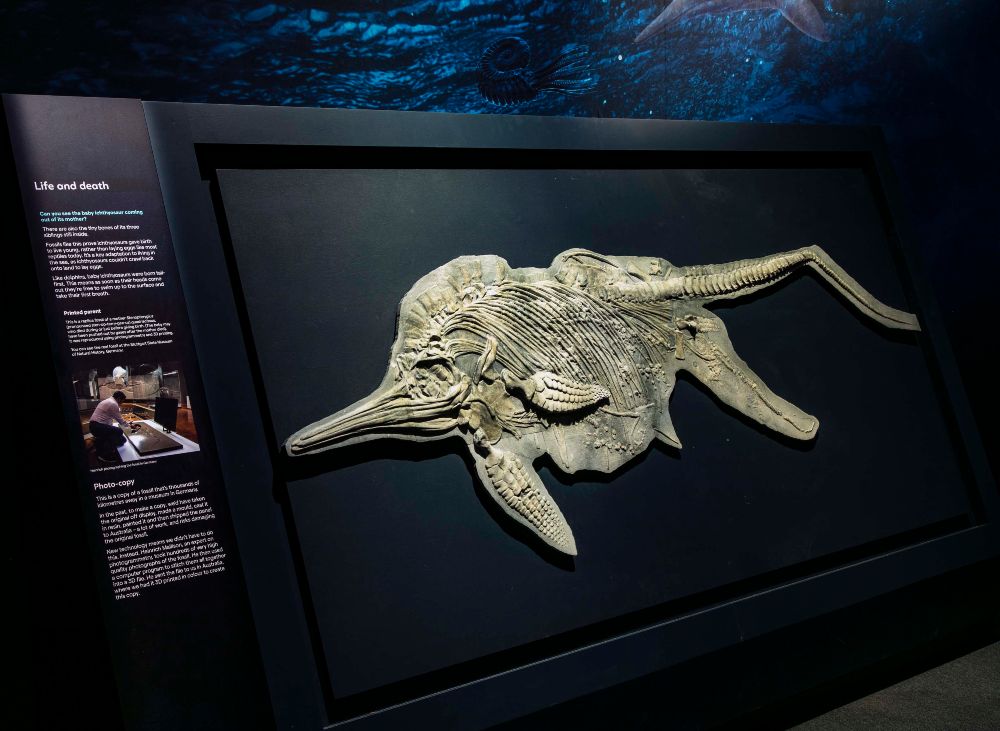 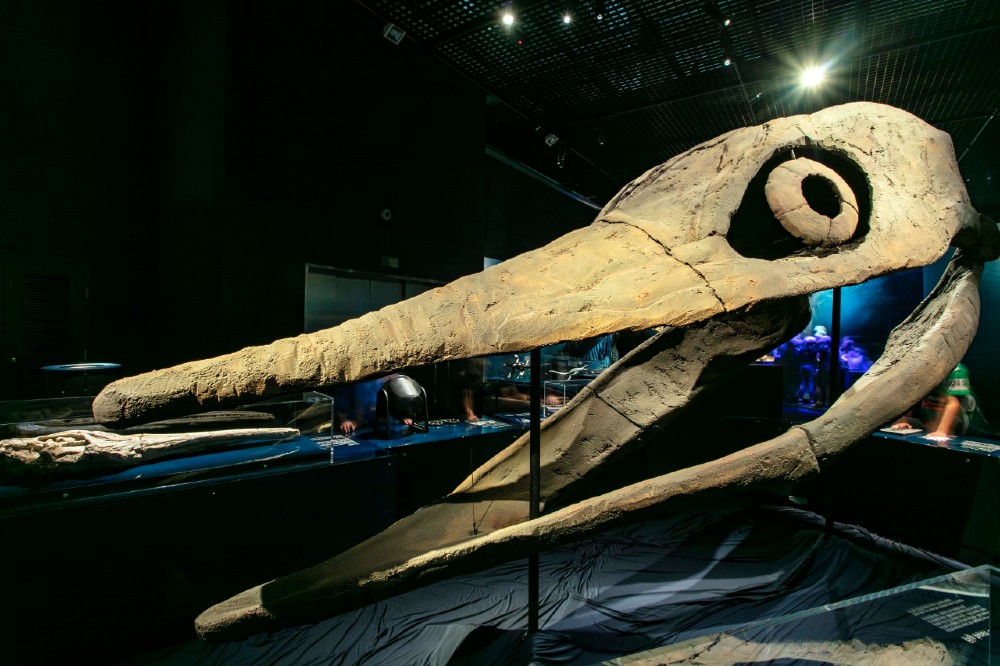 Plesiosaur (pronounced: plea-zee-o-sore) means ‘near-lizard’, as scientists felt they were more lizard-like than the ichthyosaurs or ‘fish-lizards’. They evolved after the ichthyosaurs, lived with them for about 100 million years, then outlasted them to share the oceans with the mosasaurs.

Plesiosaurs spread across the whole world. Their fossils have been found on every continent, including Antarctica.

All plesiosaurs had short tails, long flippers and flattened bodies. But there were two different versions at the front end – either small heads on long necks, or big heads on short necks. Both types were streamlined with smooth skin to slide through the water.

Their bodies were almost almond-shaped – five and a half times longer than they were wide. These are the same proportions as other swimming hunters, including sea lions and penguins. Plesiosaurs came in lots of different sizes, from a bicycle-sized 1.5 m long to a bus-sized 15 m long. 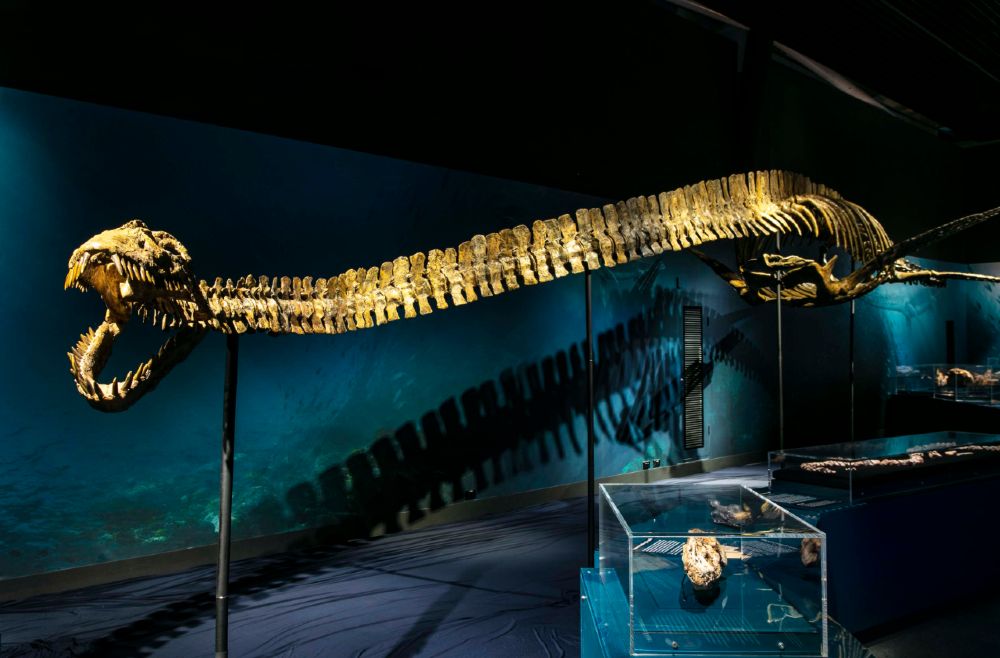 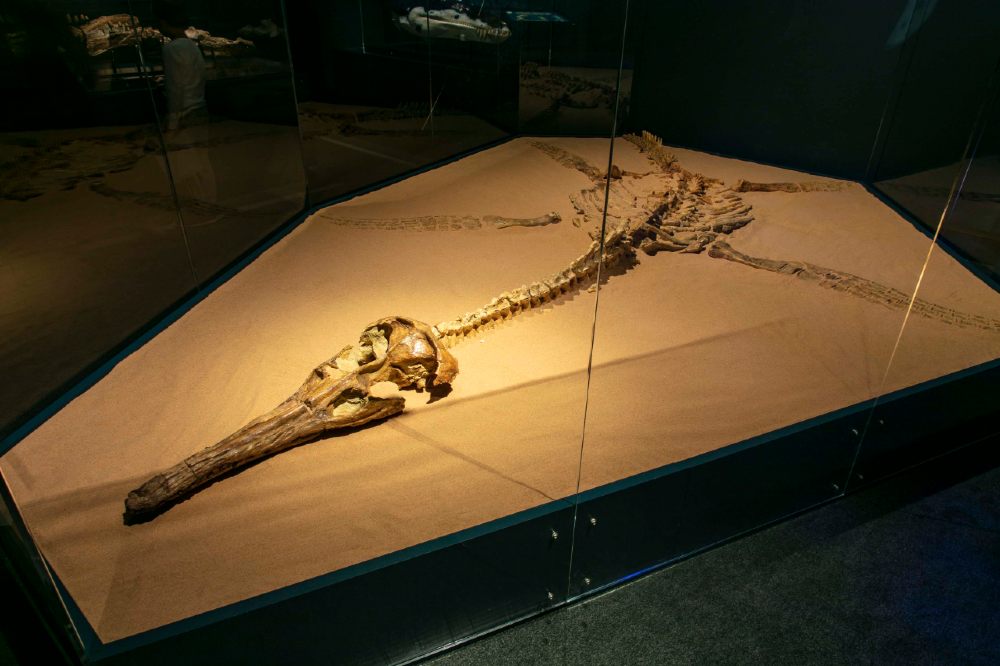 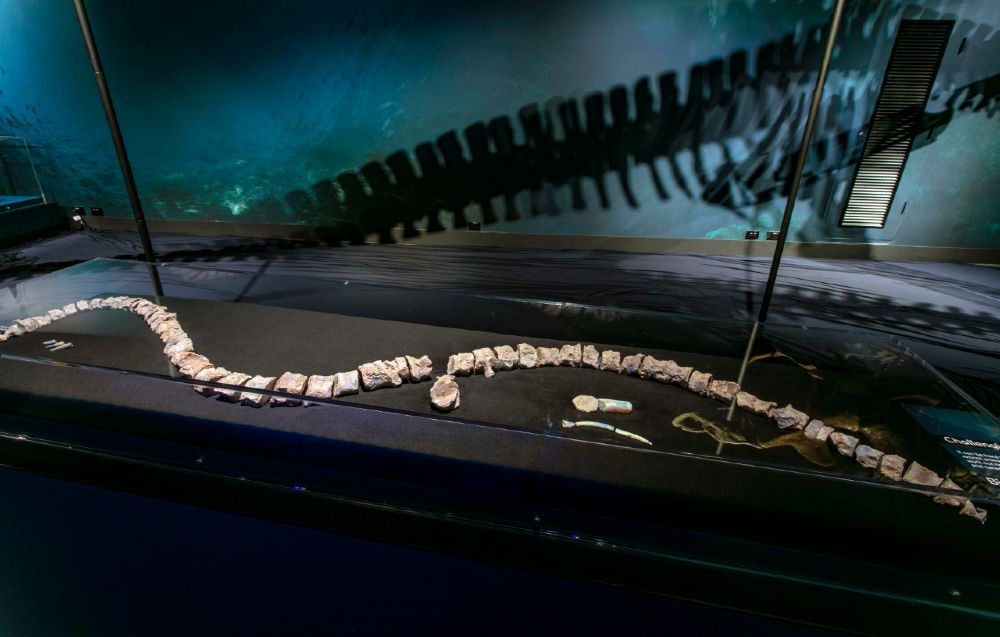 Mosasaurs (pronounced mow-sa-sores) arrived five million years after the ichthyosaurs died out and soon replaced plesiosaurs at the top of the food chain. Their fossils show a steady sequence of changes as they evolved from small lizards living on the water's edge to the ocean's top predators.

They were powerful swimmers with goanna-like bodies, long snouts and forked tongues. Their paddles were formed from soft tissue covering their long finger bones. They used them for steering as their tails pushed them through the water. Unlike ichthyosaurs and plesiosaurs, they kept their scaly skin.

Mosasaurs ate anything: ammonites, fish, turtles, plesiosaurs, other mosasaurs and even sea birds. The only thing a mosasaur had to fear was a bigger mosasaur. Mosasaur skulls with bite marks from other mosasaurs suggest they might have fought each other for food, territory or mates.

They dominated the world's oceans and inland seas for 30 million years until they went extinct, along with the plesiosaurs, at the end of the Cretaceous period. This extinction marked the end of the era when reptiles ruled the seas. 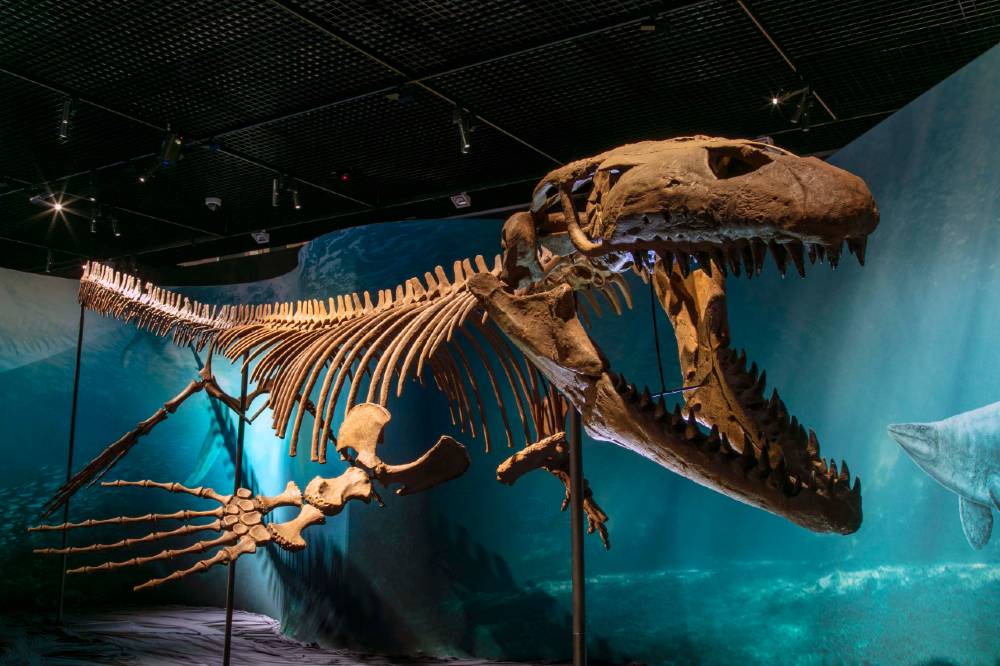 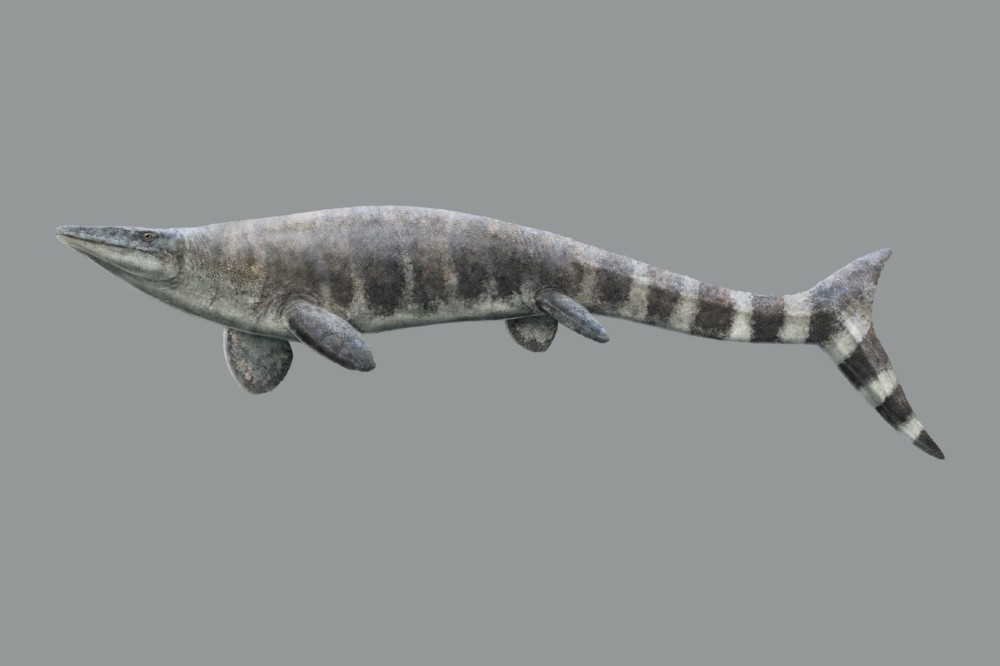 Crash of the titans

Ichthyosaurs suddenly disappeared at the end of the Cretaceous, 90 million years ago. We're not sure exactly why.

Possibly something starved the oceans of oxygen, and therefore the ichthyosaurs of their prey. Then, 66 million years ago, a 10-kilometre-wide asteroid smashed into the Earth, triggering earthquakes, tsunamis and volcanic eruptions. Dust and smoke blocked the sun and the climate changed dramatically. This led to the extinction of nearly half the life on Earth and famously brought an end to the dinosaurs (except some of those that had evolved into birds). Nearly three quarters of ocean species died out, including the plesiosaurs and the mosasaurs.

The reign of the reptiles was over. But one group of marine reptiles survived – the turtles.

Turtles had been swimming alongside the other marine reptiles for millions of years, evolving harder shells in response to their ever more terrifying predators. Turtles were the only fully aquatic marine reptiles to survive the extinction event and are still with us today – just. There are seven species of marine turtles in our oceans today, but most are endangered. 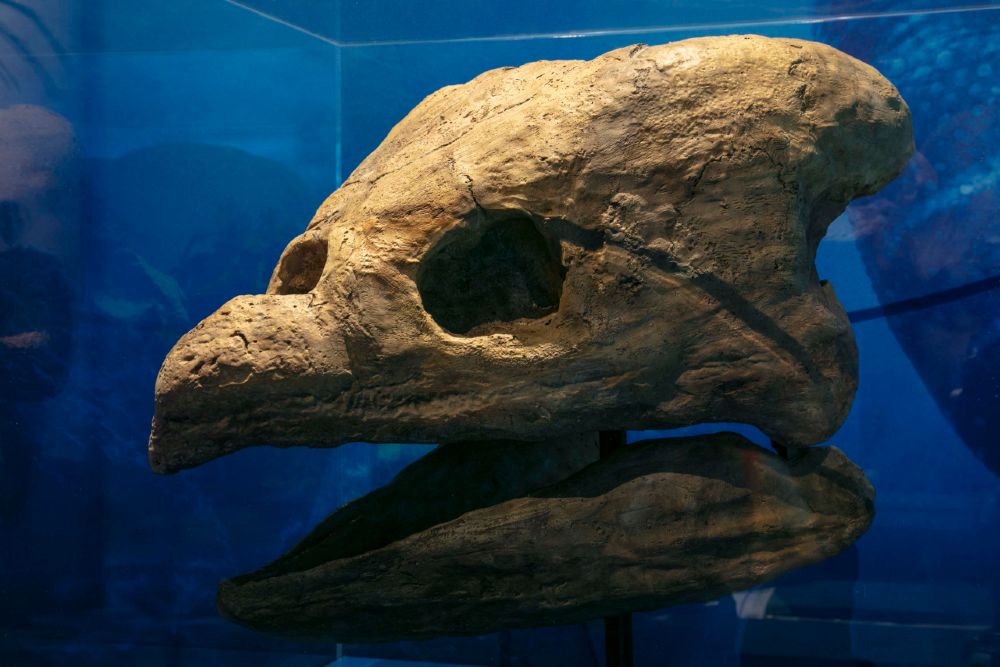 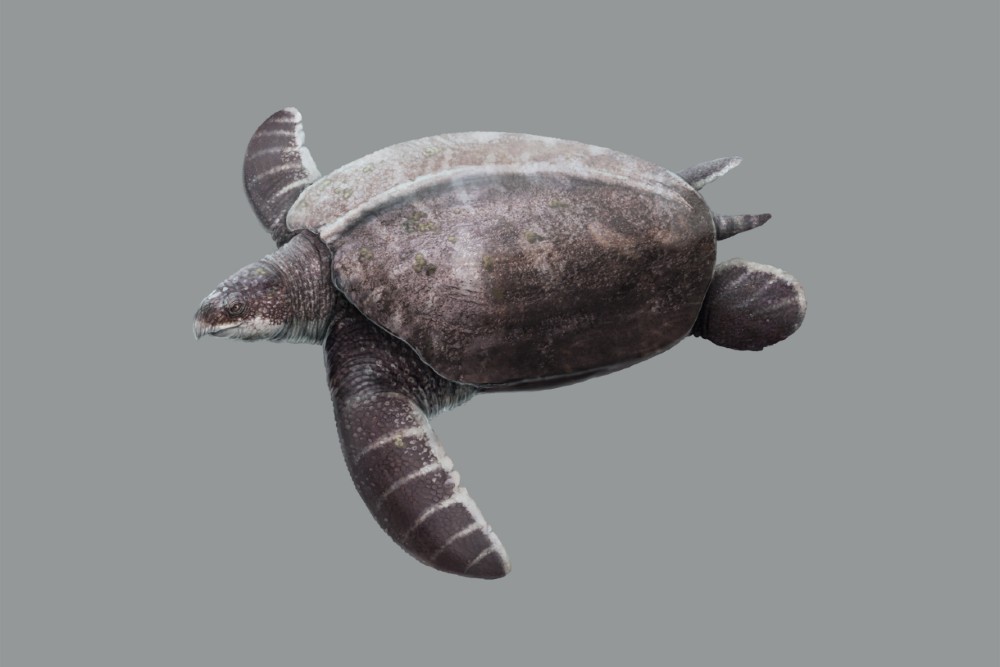 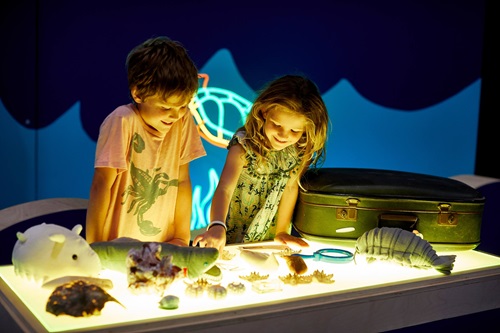 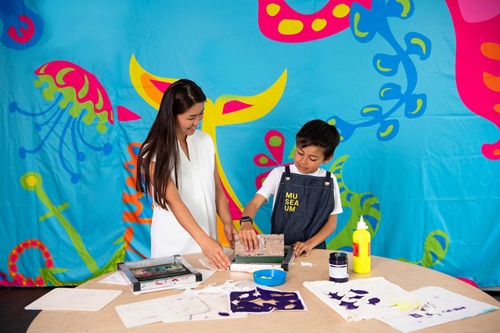 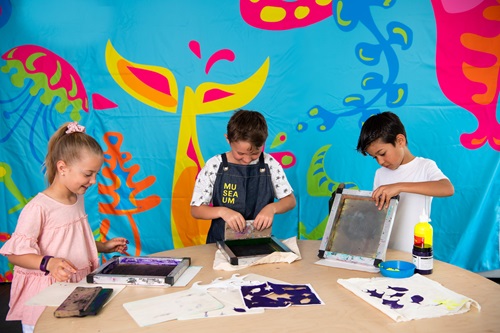