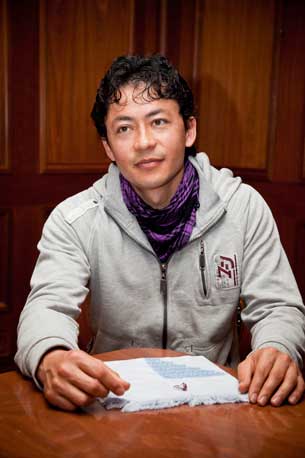 Hedayat Osyan was born in Ghazni province in central Afghanistan. In 2006 Hedayat’s father was kidnapped by the Taliban Islamic fundamentalist movement and disappeared. Hedayat, a member of the Hazara ethnic minority group, was forced to flee Afghanistan to escape persecution by the Taliban and Mujahadeen (guerrilla fighters). In 2009 he left behind his mother and two siblings, carrying only two reminders of home – his mother’s ring and a traditional Hazara handkerchief made by his sister.

Hedayat travelled to the Afghan capital Kabul and enlisted a people smuggler to obtain a false passport. In June 2009 he flew from Kabul to Kuala Lumpur, Malaysia. After spending one week in Kuala Lumpur, Hedayat travelled by boat to Medan, Indonesia, with a group of about 15 asylum seekers. The journey took three days.

Upon arrival in Medan the group was arrested as they did not have the necessary documents to enter Indonesia. They were put in gaol for about one month before they managed to escape and head for the Indonesian capital Jakarta. Hedayat spent about six months in Jakarta, before he managed to secure funds from friends in Pakistan to pay for the boat journey to Australia.

In December 2009 the group of 45 asylum seekers embarked from Mataram on an old fishing boat crewed by two Indonesian fishermen. After seven days at sea the boat’s engine failed and it began to sink in international waters. The group was rescued by the Royal Australian Navy and taken to the offshore Australian territory of Christmas Island for processing. Hedayat spent two months on Christmas Island whilst his refugee status was assessed by Australian authorities. He was then relocated to Melbourne, Australia, and eventually received a permanent Australian visa. He now lives in Sydney.

Reflecting on his difficult journey to Australia Hedayat says:

When I was in Afghanistan I hadn’t this freedom and in here I have everything. There’s massive opportunity for every people, there’s equality, there’s freedom and the life is really easy here. I’m really happy and I really appreciate the Australian Government, the Australian people who saved my life and I’m always trying very hard to give something back to Australian people, that’s my responsibility because they saved my life.