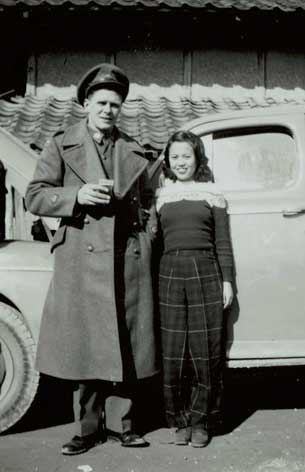 More than 600 Japanese women migrated to Australia as war brides after World War II when the Australian Government finally lifted a ban on their entry in 1952. Their husbands had served with the British and Commonwealth Occupation Force (BCOF) after the surrender of Japan in 1945.

Did you know Japanese brides were the first group of non-Europeans permitted to enter Australia under the White Australia policy?

Teruko Blair (née Morimoto) was 20 years old when the atomic bomb devastated Hiroshima in August 1945. While her home was destroyed, miraculously her entire family survived. In 1948, with food still desperately scarce, Teruko accepted a job waitressing at the Australian Army officer’s mess in nearby Kure.

Despite a strict non-fraternisation policy, Teruko met and fell in love with Australian Warrant Officer Bill Blair. Teruko was lucky – after some hesitation her family accepted her ex-enemy suitor. But Teruko was terrified that Bill would be sent back to Australia without her. Rather than live with the shame of abandonment, she prepared several suicide notes and a bottle of poison, willing to die ‘like Madam Butterfly’.

The ban is lifted

In 1952 Immigration Minister Harold Holt lifted the ban on entry for Japanese wives of Australian servicemen. In February 1953 Teruko and Bill were married by the British Consul-General in Kobe. Their first son, Bill Junior, was born in September 1953 and in November, Teruko and her little ainoko (other half) joined other Japanese brides on SS Taiping bound for Australia.

Teruko remembers steaming in through Sydney Heads and glimpsing a city ‘like a fairy tale – green hills, beautiful trees, bright sky, colourful roofs … such a contrast to the sameness of Kobe, all grey and colourless’. Teruko and Bill lived in Melbourne until Bill was posted to the army base at Puckapunyal in central Victoria. In 1968 Teruko returned to Japan to visit her family for the first time since leaving in 1953.