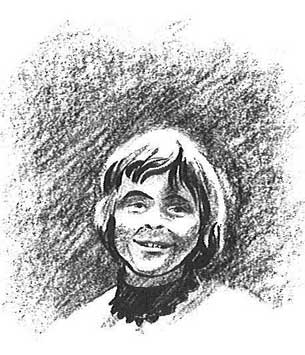 Sarah Simpson (née Livingstone) was the fourth of six girls born to Richard and Barbara Livingstone. Sarah’s father worked as a marine engineer. In the late 1840s the family moved to London, where they remained through most of the 1850s. During this time Barbara Livingstone died and Sarah’s father decided to migrate to Australia. He wanted to set himself up so he could bring his six daughters out to start a new life.

The fare was expensive and Richard had to arrange to bring his daughters out one by one. Martha, the eldest at 22, was the first to emigrate in May 1859. Meanwhile Sarah, now 14, was working as a domestic servant in Surrey, near London, until arrangements could be made for her to join her father and sister.

The Government Immigration Board had set up a plan called the Government Remittance Scheme. Under this scheme a deposit of £4 had to be paid for every person that was to emigrate. The deposit was refunded when that person arrived in Australia. Martha paid the deposit for Sarah in July 1859. The full passage was to cost £14, four shillings and eight pence. Around £8 of this would be refunded upon proof of arrival.

In December 1859 Sarah, now 15, departed Liverpool, England, on SS Dirigo. She arrived in Sydney in April 1860 and was housed at the Hyde Park Barracks, which had previously been used as a male convict centre but was now a depot for immigrant women.

The women slept in iron beds in whitewashed dormitories and ate in mess groups. Sewing and cooking classes helped to pass the time. Most would have stayed only a few days before getting jobs. Sarah stayed at the Barracks until she was able to join her family. In 1864 the remaining Livingstone daughters were able to join Sarah, Martha and their father in Sydney.

Sarah married Andrew Simpson in October 1867. He was also a marine engineer and they lived in the Sydney suburbs of Balmain and Pyrmont until the late 1880s, when they moved to Brisbane, Queensland. They had three sons, and Sarah lived until she was 91 years old, passing away on Christmas Day in 1935.