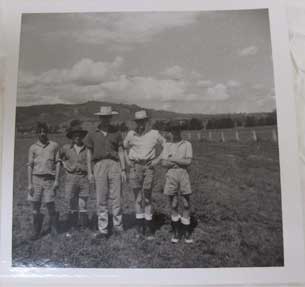 Ronald Smith was born in England at the end of World War II. Ronald’s mother placed him in the Barnardo’s Babies Castle in Hawkhurst, Kent, in southeast England, when he was six months old. He was later moved to Howard House in Bedfordshire and then Meadows Memorial Home in Southborough, Kent.

Ronald stayed at Meadows Memorial Home for about six years. There were around 60 boys at the home, and Ronald recalls volunteering for kitchen duty to avoid school. He helped with scrubbing, cleaning and peeling potatoes to earn pocket money.

Who wants to go to Australia?

In 1961 Ronald remembers a Barnardo’s representative coming to the home and asking if any of the children wanted to go to Australia. The children were attracted by stories of adventure, sunshine and freedom in the outback – as well as the prospect of a six week voyage on a big ship. Ronald, aged 16, was amongst those who eagerly put up their hand to migrate to Australia with Barnardo’s.

Thomas Barnardo was one of the pioneers of child migration to British dominions. His organisation migrated some 30,000 children to Canada from 1882–1939 and 2,784 children to Australia from 1921–67. Children were sent to Canada and Australia to relieve the population pressure in overcrowded British cities, to populate the empire with ‘good British stock’ and to give them a new start in the dominions.

There were about 17 children in Ronald’s migration party and two adult escorts. They were taken to Barnardo’s Barkingside Village in northeast London, where they stayed for a few days before departing for Australia. The children were supplied with suitcases, clothing, underwear, footwear, a mackintosh, combs and brushes. Ronald also packed his prayer book and sporting trophies from Meadows Memorial School, ‘because that’s all I owned. I was proud of them and still am.’

Ronald boarded the P&O liner SS Stratheden at Tilbury in November 1961. He arrived in Sydney in December 1961 and was taken to the Barnardo’s Tooloogan Vale training farm at Scone in the NSW Hunter Valley. Barnardo’s had sold its Mowbray Park farm at Picton (opened 1929) in 1960 and purchased the Scone property to establish a farm training school for migrant boys of post-school age.

After completing his farm training, Ronald stayed on at Tooloogan Vale for 12 months as an overseer. Ronald was then posted to a dairy farm in north Scone, where he remained for four years until gaining his truck driver’s licence at the age of 21. He is still working as a truck driver today.