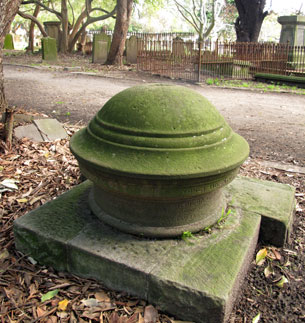 On 19 may 1838 at the Central Criminal Court of the Old Bailey in London, Bathsheba Ghost was found guilty of receiving stolen property and was sentenced to 14 years transportation to the colony of New South Wales. Arriving towards the end of the convict era, she rose to one of the most prominent and well-paid positions a female could hold in the colony: she was Matron of Sydney Infirmary and Dispensary for 14 years.

Christened into the Church of England on 25 December 1809 at Ashcott in Somerset, England, Bathsheba Dominey was the eldest of six children. In 1838, aged about 29, she lived at 338 Oxford Street, London, with her husband Thomas Ghost and their three-year-old son Thomas, and had been working as a ladies nursery maid.

After four months at sea, Bathsheba Ghost arrived at Port Jackson in March 1839 aboard the Planter with 170 other female convicts. Thus began her solitary exile, separated from both child and husband, deprived
of motherhood itself.

Six years after her arrival in the colony, while working as a domestic servant at a property in Sydney’s Castlereagh Street, Bathsheba was given her ticket of leave. This allowed her to work as a free woman so long as she remained in the district of Sydney. It is thought that soon afterwards she began working as a nurse at the Sydney Infirmary and Dispensary. Two years later, in 1847, she was granted a conditional pardon and was free so long as she did not return to Britain.

In 1852 Bathsheba became the Matron of the Sydney Infirmary and Dispensary with an initial annual salary of £80, board and lodging provided. By 1854 this salary was increased to £100, and finally £120, one of the highest salaries for a female
in New South Wales.

The hospital’s annual reports regularly praised her exertions in maintaining order and cleanliness, and for taking a leading role in training nurses under her care. Bathsheba worked during a period of significant change in medical practices – including the first use of anaesthetics.

Bathsheba died in August 1866 of a lingering and painful disease of the uterus, relieved only by significant doses of drugs such as opium and alcohol. In her will Bathsheba bequeathed £100 to the hospital, a significant sum in 1866.

Bathsheba never remarried, and we don’t know what happened to the husband. Towards the end of her life, however, her son Thomas migrated to Australia and she came to know her granddaughter Eliza. Other family members migrated voluntarily. Her brother Thomas, his wife Lydia and their two sons arrived in Victoria under the Bounty System in 1843. She also sponsored her brother Solomon and his wife Harriet, her sister Bethia and husband John Fry and the two couples’ nine children as free settlers. They arrived just months before her death, some of them working and boarding at the hospital. Fittingly Bathsheba died at her workplace, the place of her reputable re-emergence into society. In 1953 the then Matron Elsie Pidgeon unveiled a memorial stone, taken from the present hospital, in St Stephens Cemetery Newtown in honour of Bathsheba.