‘You have undertaken to become an American – just as millions of other people have done before you. Getting to know your adopted country will be an exciting adventure and the future is before you.’– ‘A Bride’s Guide to the USA’, British Good Housekeeping Magazine, about 1939-45

After about twenty days at sea the bride ships finally arrived in San Francisco. Private freighters like Norma Little’s CITY OF DURHAM docked in New York or Vancouver, but the Matson Line ships organised through “Operation War Bride” made San Francisco their port of call. For those lucky enough to be met by their husbands or fiancées the meeting was often mixed. Nervous brides didn’t know what to expect in their new country, and despite the helpful “A Bride’s Guide” published by British Good Housekeeping Magazine, many had false expectations of their new country based on images from Hollywood films and cowboy comics.

More than one bride commented about what a rude shock it was to reunite with their husbands. Accustomed to their smart pressed uniforms, many husbands were virtually unrecognisable in civilian clothes. One bride refused to get off the ship because she failed to recognise the man waiting for her on the docks. Norma Little describes a “most unromantic meeting”. Seeing Lloyd in a fedora hat and what she describes as orange shoes, she felt that her shock was probably equal to his… he’d never seen her so pregnant.

The scene at the docks was generally frenetic. Betty Gones describes babies crying, husbands meeting wives and Red Cross nurses and officials busily making arrangements for brides’ accommodation and forward transport. The press was also interested in the arrival of so many Australian women and children. Both Adelie Hurley and Audrey Capuano appeared in newspaper articles upon their arrival, with Audrey hailed as “Betsy Ross the Second” because of her stars and stripes jumper.

When the women finally arrived in the USA many faced long journeys across the country by train before arriving at their new homes. One bride wrote to her family that the US Army, keen to keep transport costs to a minimum, had piled hundreds of brides on the one train, regardless of their final destination. The train company by contrast was eager to turn a profit, and took them by the most convoluted route possible. Her journey from San Francisco to Florida took her via Arizona, New Mexico, Texas, Oklahoma, Kansas, Illinois, Iowa, Chicago, Kentucky, Tennessee, Atlanta and finally on to Jacksonville. 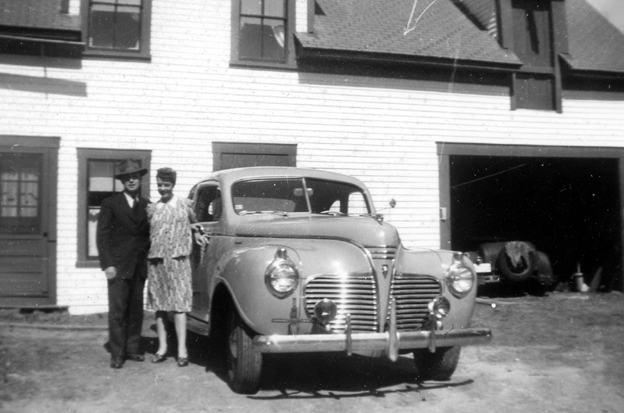 Adjusting to life in a new country was difficult for many women. So far from home, small cultural differences were magnified. Many women commented about difficulty in understanding one another. While the Australian ear was fairly well attuned to the American accent thanks to Hollywood films and the prolonged contact with US servicemen during the war, Americans found it much more difficult to understand the broad Australian accent.

Reception of the Australian women was mixed. The sort of resentment the American men faced in Australia was often experienced by their wives when they arrived in the US. But many reported a really friendly reaction from Americans, eager to make them feel at home.

Some found family or religious differences they hadn’t foreseen. It was not uncommon for the couples to have to live with parents and other family members due to the severe shortage of housing in post-war USA. While the variety of experiences was enormous many women found themselves homesick and missing the support of their own family and friends. 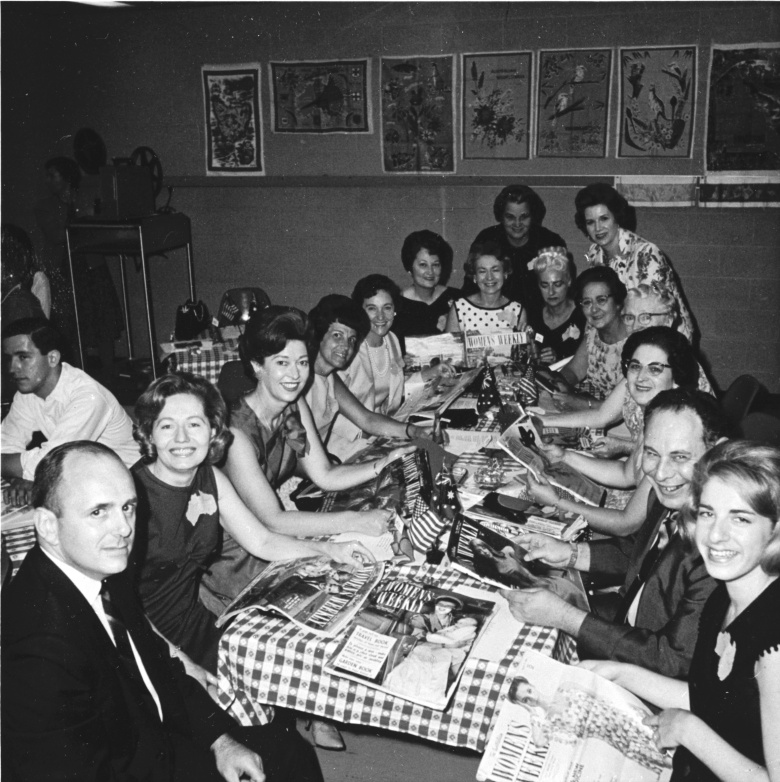 One solution was to meet with other Australian women. In Pittsburgh Audrey Capuano was one of the founding members of the “Australian Wives’ Club”. Local clubs of this sort sprung up in many cities and towns. Norma Little didn’t have access to an Australian club in New Hampshire, but she did socialise with the local British war brides from time to time. Norma also talks about meeting Australian women in the US who became lifelong friends. Norma’s son, Murray, actually married the daughter of a war bride friend, so the Australian connection remained strong.

Many women made a life in the USA, but there were also those who returned to Australia. 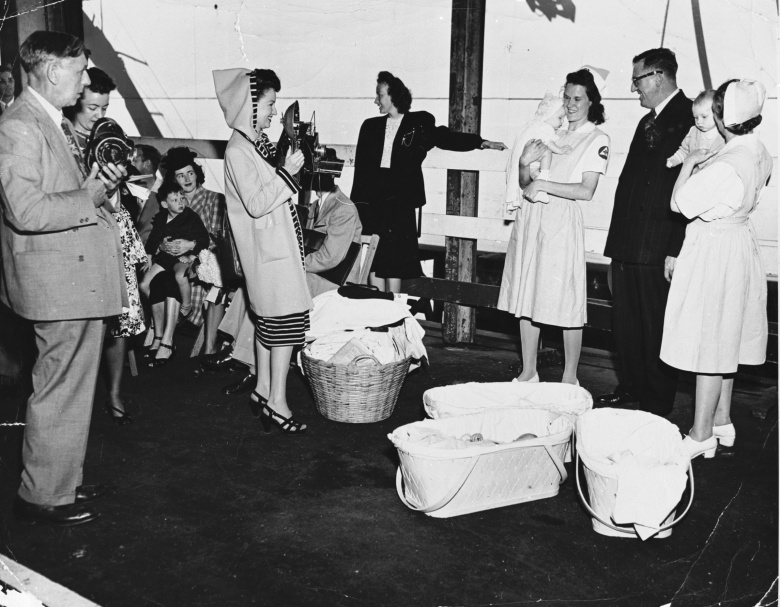 There were cases of women being rejected by their husbands and turned away almost immediately, some being informed by telegram that they were no longer wanted. Their husbands may have been married already, or had just had a change of heart. One woman talked about the absolute poverty she encountered in her husband’s coal mining town, and certainly many felt that they had better economic prospects in Australia where housing and jobs were a little easier to come by.

In 1947 Immigration Minister Arthur Calwell introduced a scheme of assisted passage for Americans wishing to migrate to Australia. Some couples took up this opportunity and chose to settle in Australia. Others made their own way back either in the immediate post war years or later. Joan and Ted Heim returned after 30 years, settling back in Victoria in 1974. The reasons for returning to Australia were varied; homesickness, economic opportunities, housing, family obligations and lifestyle.

Whether returning to Australia on holiday or to live, with or without their American GIs, Australian women came back to a country forever changed by the experience of WWII and the Americans who fought in the Pacific. 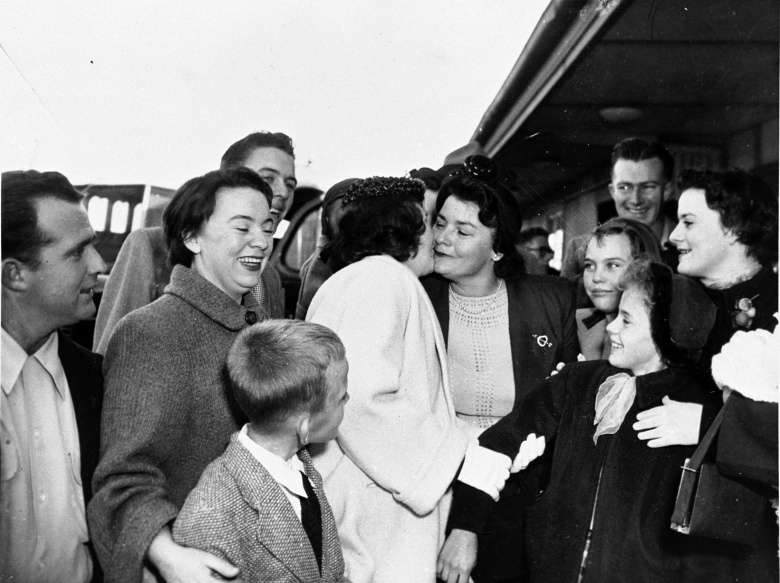 Adelie describes arrival and life in the USA (3’53)

Adelie talks about her decision to return to Australia (4’30)

Betty talks about returning to Australia (51″)

A lot of girls thought they were going to Hollywood (35″)

I was expecting this gorgeous big golden gate… (1’10)