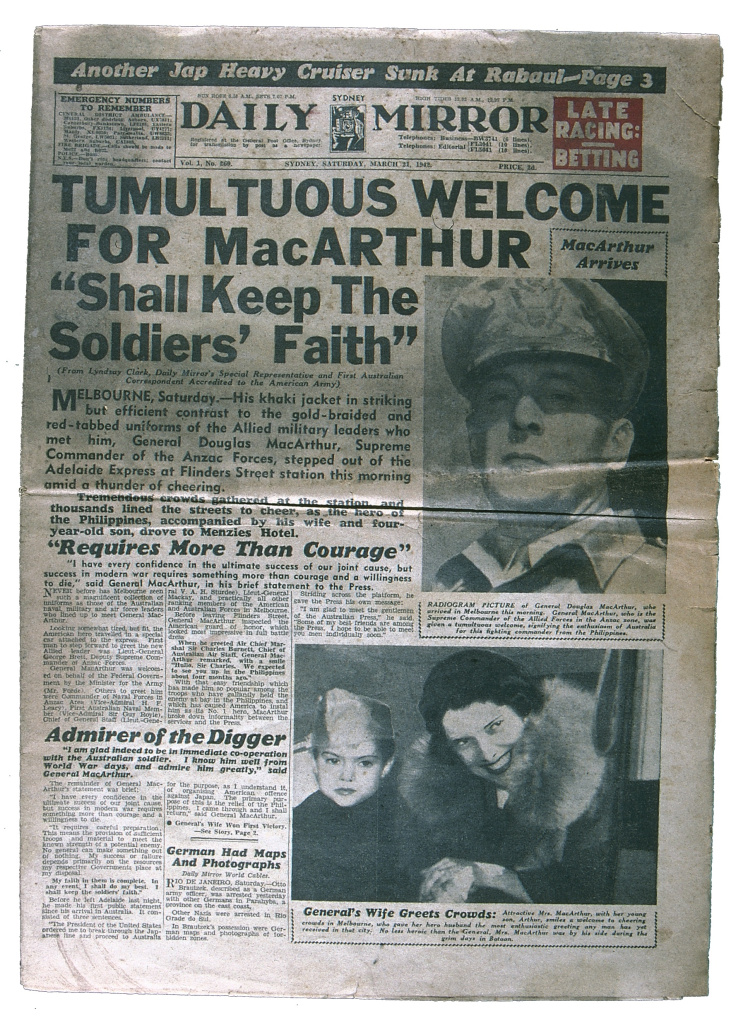 Tremendous crowds gathered at the station, and thousands lined the streets to cheer, as the hero of the Philippines accompanied by his wife and four-year-old son, drove to Menzies Hotel.’– Daily Mirror, Sydney, Vol. 1, No. 269, Saturday 21 March 1942

General Douglas MacArthur arrived in Melbourne on 21 March 1942 in order to take up his position as Supreme Commander of the Allied Forces in the South West Pacific area. Both Australian and American forces fought in General MacArthur’s campaign, often alongside one another. Those who did had a much different opinion of the Yanks than the general public perception, swayed by newspapers and magazines. At first these helped reinforce the popular appeal of the visitors, but soon became critical.

The influx of American troops was swift. By August 1942 there were 99,000 American servicemen stationed in Australia and by November of the same year the number had reached 107,000 [1]. With so many young men arriving the impact on Australia’s social make-up was profound. This was, after all, the first sustained contact Australian’s had had with another culture. Still very much tied to Britain and British identity, Australians had their first taste of American openness and self-assurance.

The influence of the visitors was compounded by the absence of so many young Australian men already fighting overseas. Norma Little described Sydney prior to the US arrival as a “social desert”. Seeing US troops for the first time in Canberra where they were in training, she was excited by the prospect of these young men in uniform. Others were overwhelmed by their sudden prevalence, but there is no doubt that the Americans brought with them an exciting change for Australians who had long been living under wartime conditions.

The concentration of US troops in Queensland resulted in huge social change there, with Brisbane transformed from a country town to a major urban centre almost overnight. But the US presence was felt throughout Australia with troops stationed as far a field as Perth and Adelaide, while Sydney and Melbourne remained popular destinations for GIs on leave. 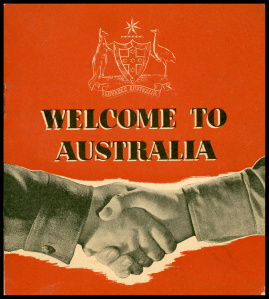 When the Americans began to arrive in 1942 the Australian-American Co-operation Movement, among others, produced a series of booklets aimed at familiarising the Yankie GI with Australian customs. The booklets served as travel guides offering ideas for outings as well as general information, currency exchange and brief histories of Australian cities and towns.

Of all the information the most useful was probably the section explaining slang terminology. Many brides and their husbands commented on the subtle differences in meaning that almost got them into trouble. The most commonly mentioned misunderstanding was the use of the term “knocked up”, which in 1940s Australia simply meant tired or “pooped”. Of course we are now all familiar with the prevailing American use of the term, and it is easy to imagine the shock of a serviceman on hearing that his girl was “knocked up”.

Another of the tips featured in the guides proved relatively useless. GIs were given a run down of Taxi charges, how meters worked, and what they should expect to pay for a taxi fare. Being educated about what to expect did not stop Australian taxi drivers taking full advantage of the GI’s spending power however. Not only did many taxi drivers massively inflate their tariffs, they often also took long detours on their way to relatively close destinations. One interviewee reported being driven all over town only to be returned across the street from where he had hailed the taxi.

The extraordinary profit the drivers were able to make from the Yanks in turn led to difficulty for ordinary Aussies to hail a cab, fuelling resentment amongst the Australian public. 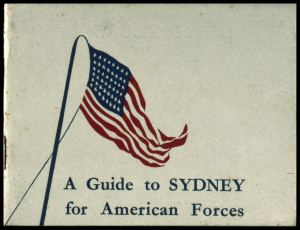 Celebration of the American presence soon gave way to concerns among conservative sectors that the moral fibre of Australian society was being eroded by the influence of the Yanks. Women who associated with Americans were often characterised as “good time girls”. They were accused of being both disloyal to Australian men and easy prey to the lure of the American dollar. Certainly the unequal pay scale between Australian and American servicemen was a cause of contention. Australians simply couldn’t compete with the US military salaries and consequently the GI had enormous spending power in wartime Australia. This, coupled with their superior uniforms and well stocked canteens became a cause of resentment at the same time as it was seen as the major attraction for Australian women.

But many of the women who took part in the ANMM oral history project gave far more nuanced explanations for their attraction to American men. Their smart uniforms may have been a factor, but most spoke of the American man’s gentle manner, attentiveness and generosity. This is counter to the prevailing stereotype of the brash, loud American, with many women speaking of their softly spoken, considerate nature. American men were certainly more comfortable with female company than their Australian counterparts who were still so strongly steeped in the Australian male bush-myth. Americans were also more persistent in their attempts to gain women’s affection, and were accustomed to presenting women with flowers and corsages, something the Australian male regarded as “sissy”.

That so many Australian women dated and married American men threatened the Australian male’s dominance. This, coupled with the growth in job opportunities and changing family dynamics, precipitated dramatic social change for women. As Rosemary Campbell points out; ‘Although the process took many years, the influence of the American presence was one of a number of factors which provided women with the confidence to strive for and consolidate a more independent role in Australian society.’[2]