One of the artists featured is Tawhai Rickard, whose recent work explores the historical and contemporary concepts of bi-cultural New Zealand through the events of James Cook landing in in Tūranganui-a-Kiwa (Gisborne) 250 years ago. We caught up with Tawhai to find out more about what influences his practise and his work Cook Discovers Aotearoa 1769 featured in the exhibition.

1. Tell us a little about yourself.

I have practiced contemporary Māori art since 1990 and am represented by the Paul Nache Gallery of Gisborne New Zealand.

2. What influences your work?

I am influenced by the epic history of my country Aotearoa, New Zealand and its historical interrelationship between Māori and Pakeha to the present day.

I’ve always been absorbed by the cultural and spiritual perspectives found in music and other pop culture genres and see this fusion in art a very interesting concept to dabble in. To this end, I enjoy fusing iconic material and vernacular in order to strike a chord with the human condition and psyche.

The aesthetic of my work consists of the early 19th-century figurative painting style of my ancestral meeting house ‘Hinetapora’. I also use baroque sculptural elements identifiable with the Victorian era, which I overlay and adorn with this painting style – in doing so, merging the two founding nations of my country in a sort of poetic dance. 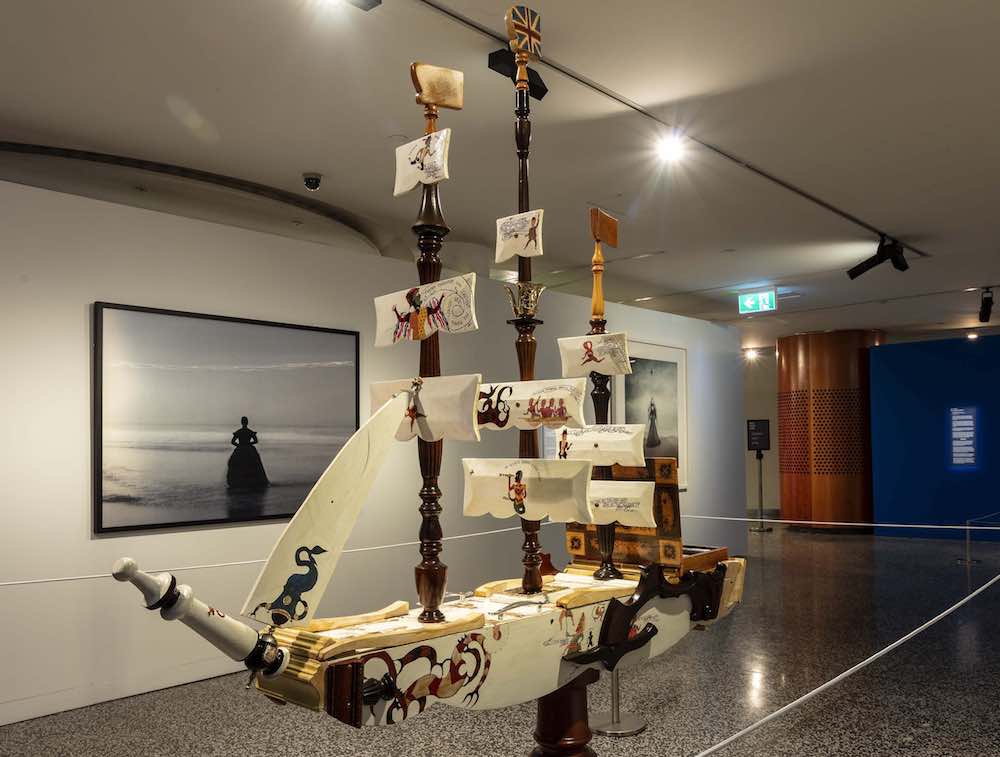 3. Your work, Cook Discovers Aotearoa 1769 is currently on display at the museum in HERE: Kupe to Cook. Could you explain what the artwork explores?

Cook Discovers Aotearoa 1769 was created in response to the 250 year commemoration of landings in the South Pacific, particularly Aotearoa New Zealand. The work is in reprisal of Charles Goldie and Louis Steele’s 1898 painting, The Arrival of the Maoris in New Zealand – a misconstrued depiction of the migratory landing of the Māori through the condescending lens of the Victorian mindset.

Here a distraught Cook is depicted with his incapacitated crew stumbling across the land mass of Aotearoa. The country in this case exhibits a host of visual narratives indicative of historical and contemporary landscapes pertaining to spiritual, cultural and social issues.

4. There are various drawings on the sails in Cook Discovers Aotearoa 1769. Could you explain what some of these mean?

I have portrayed various historical characters involved in Cook’s landing of Aotearoa, including supernatural beings relevant to our country’s spiritual and occult foundations. To these I have imposed an assortment of dialogue concerning issues of Mana Whenua (Māori land sovereignty) and Raupatu (conquest without right). Other images depict historical snapshots of Aotearoa reflecting its ever changing cultural and political face. 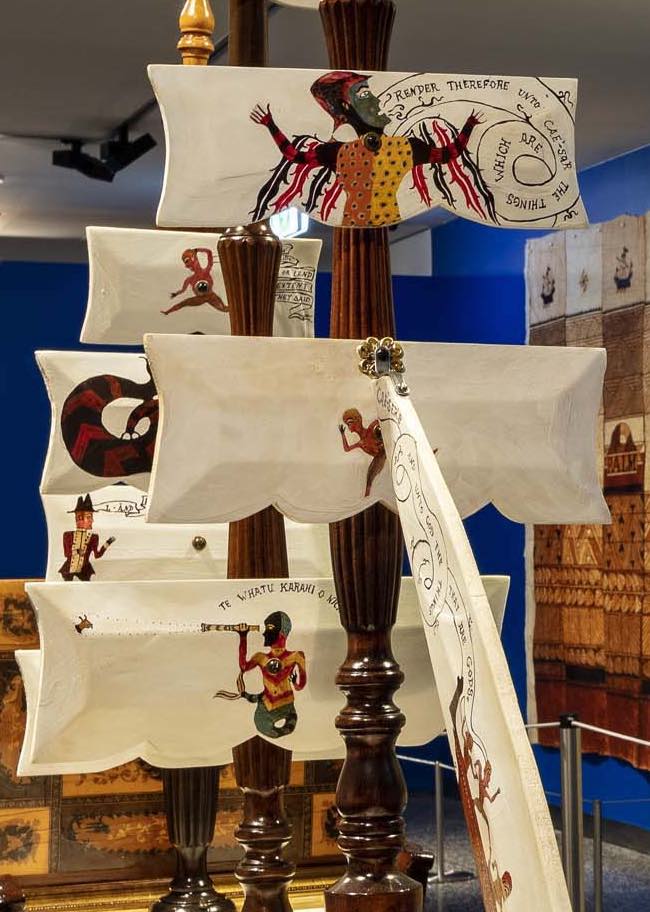 Close-up of a section of Cook Discovers Aotearoa 1769 by Tawhai Rickard, 2019

5. What does it mean to have your work displayed in this exhibition?

Indigenous history to the masses has often been presented by those who are associated with governance. Due to this, historians have for the most part given an inaccurate, biased perspective of Indigenous people.

Being part of this exhibition is a great honour and privilege. I also view it as a means to introduce an alternative perspective to our country’s historical and contemporary landscapes pertaining to cultural, social, political and religious climates.

View all posts by Laura Signorelli→
Posted in: Exhibitions , Indigenous
↑