What is maritime archaeology?

James: Maritime archaeology is the study of the human past and particularly people’s interaction with oceans, lakes, rivers – anything dealing with the maritime world. So we study historic shipwrecks, we study jetties, we study wharves, we study inundated landscapes – all of these different things where people were basically interacting with the water. 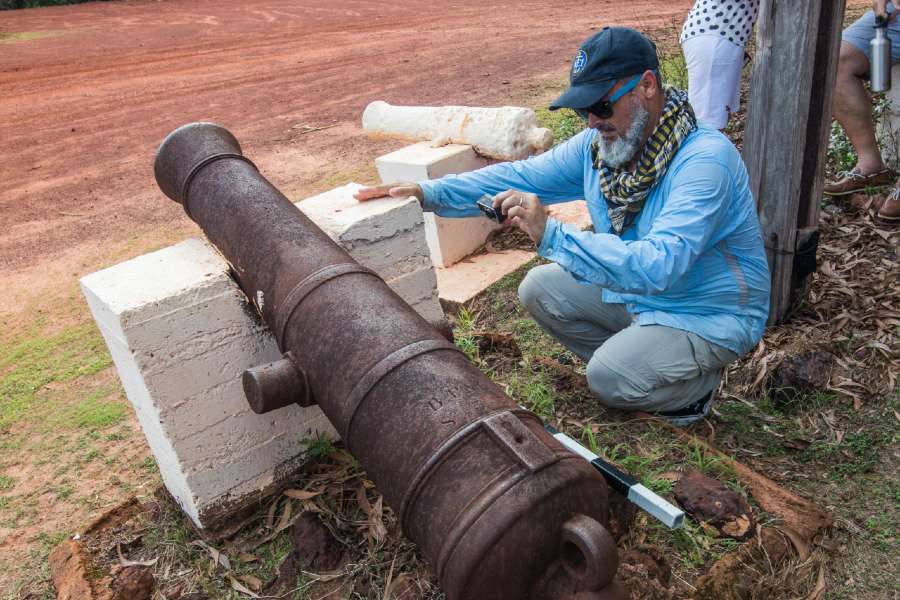 What is your career highlight?

Kieran: I think my career highlight has to be diving on the wreck of HMS Pandora in Far North Queensland. Now this is a really cool site, it's got a fantastic story. It's a British warship that was in the Pacific looking for the Bounty mutineers. The British government sent HMS Pandora to track down the mutineers and bring them back to England for trial and punishment.

Unfortunately, Pandora got wrecked on the Great Barrier Reef. You have to remember that the Great Barrier Reef in 1791 was very poorly charted – no one knew their way through the Reef. The captain of Pandora made a mistake, and he basically ran the ship up onto a coral bommie and it sank in 36 metres of water. 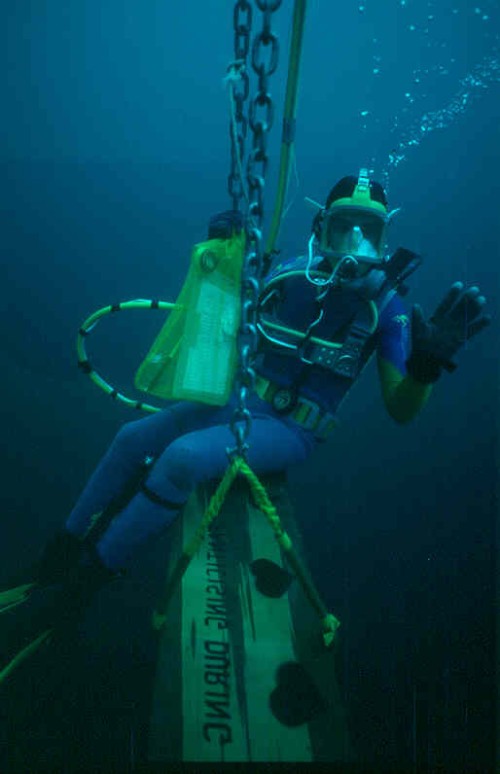 Kieran Hosty during one of his expeditions to HMS Pandora. Image courtesy Gary Cranitch, Queensland Museum

Pandora is in a perfect condition for shipwreck in the coral reef. It got protected by sand from storms, cyclones and teredo worm and so on, and so it's in fantastic condition. So when you're working on the wreck of the Pandora, other shipwrecks are scattered over the reef and there's bits and bobs lying on top of the roof top, but in the case of the Pandora, you're actually excavating individual cabins. So you go down and excavate with your water dredge and you find the sides of the cabin, and you go down a bit further and then you find the store cupboards in those cabins, you go down a little bit further and there's drawers you can pull out and recover material from the shipwreck. And so I did seven expeditions on the Pandora wreck site recovering material from people's cabins – super cool site.

James: My career highlight would probably be the first shipwreck I ever worked on as a grad student. I worked on what's known as the Emanuel Point Shipwreck in Florida. It's a Spanish galleon that wrecked at Pensacola, Florida in 1559 and it was part of a colonisation fleet for a Spanish conquistador named Tristán de Luna y Arellan. It was an amazing wreck, it's the second oldest shipwreck ever found in the United States. There was tonnes of material culture related to the Spanish colonisation effort, as well as artefacts that were associated with Aztec mercenaries that they brought with them to North America to subjugate the local Native American population. We learnt a lot about Spanish ship construction during this period, and other different things so it was just really an amazing project to work on.

What shipwreck do you wish you could find?

James: The shipwreck that I would really like to find is the remnants of the gunboat Spitfire.

Spitfire was Australia's first domestically built warship, it was built at what's now Barangaroo right across from the museum at what was at the time Cuthbert's Shipyard and we know very little about it. We don't really know how it was designed, we don't know how it was constructed, and there's a very scant historical record associated with it – so I just think it would be fascinating to find it. Hopefully, we'd have some hull remains left so we could sort of build a picture of how this boat was designed and how it was constructed. 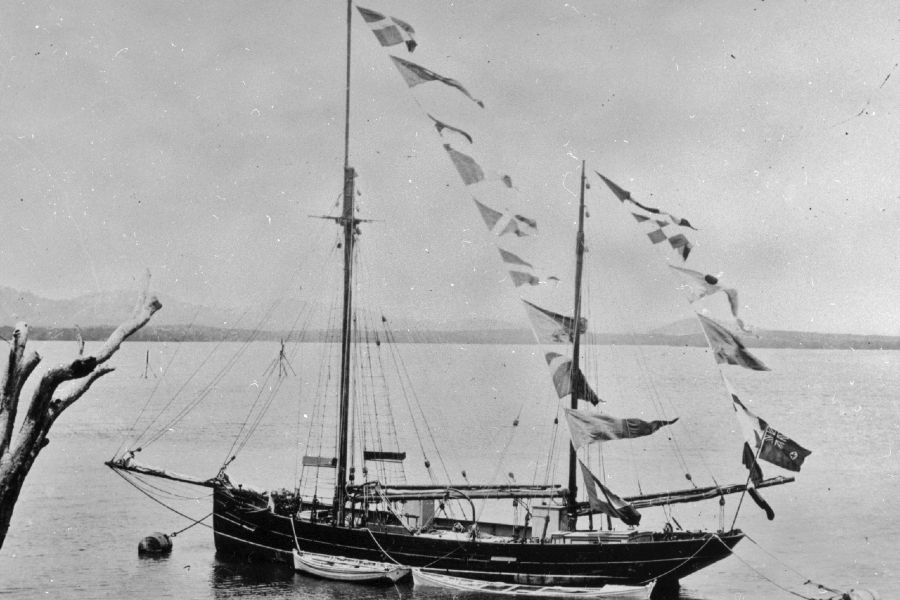 We have pretty good record that it was apparently a very good sailing vessel it handled itself very well on the water. So it'd be really neat to look at that. The other thing about Spitfire that I find really fascinating is that it was built as a gunboat, but it only was a gunboat for a couple of years, after that it ended up serving as a pilot vessel in Queensland, and it was used to find the mouth of the Burdekin River there. And at the end of its life, nearly 50 years after it was built, it was operating as a sea slug or bêche-de-mer fishing vessel that was crewed predominantly by Aboriginal and Torres Strait Islander people. So, I find that very interesting, I'd like to know more about the lives of those people who were serving on Spitfire at the end of its life.

What has been the worst weather you've encountered on the job?

Kieran: Everyone who works in the field has a bad weather experience, but the one that sticks in my head the most is being caught in a cyclone off the far north coast of Queensland back in 1996. Now the skipper on board the boat was keeping an eye on the weather watch coming through from the Weather Bureau, making sure everything was fine. And as he was getting weather maps faxed to him, he noticed that the small depression forming in the coral sea was getting bigger and bigger. But in fact, the barometer on board the vessel that we were on was actually indicating the low that was forming there was a lot deeper and a lot nastier than what the Weather Bureau was saying. 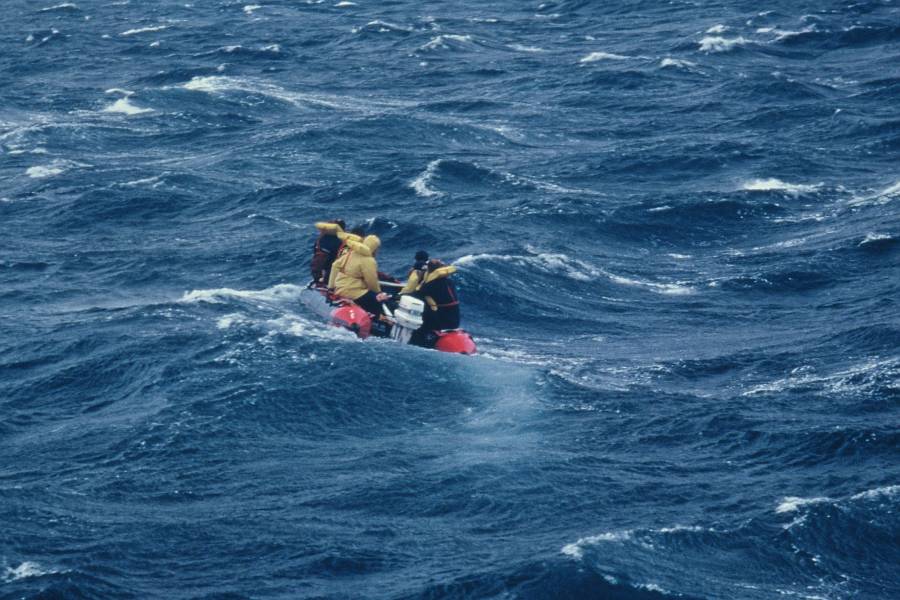 So the skipper of the boat actually informed the Weather Bureau, that he thought there was a cyclone forming in the coral sea – and in fact it was. It was turning into a deep depression and it got down to about 870, very very low, very warm water, and the cyclone started, and it formed about 30–40, kilometres north of us. So we had to take shelter behind the back of a big sand island as it was too late for us to actually get into port. The seas got up to about eight metres, and they were pounding over the front of the vessel – it really was a terrible experience  and quite scary at the time.

What advice do you have for those who want to start a career in archaeology?

James: When I started out in archaeology I had the opportunity to volunteer on some excavation projects and I think one of my biggest bits of advice would be if you have the opportunity to volunteer and actually get your hands dirty or get in the water, you should do that. The other thing I think that is useful for anyone who aspires to be an archaeologist is to learn as much as you can, and diversify a bit. If you've got other skills sets: if you can draw, if you're a good photographer, if you can use computer applications, as many different skill sets as you have, that's only going to benefit you in the long run. 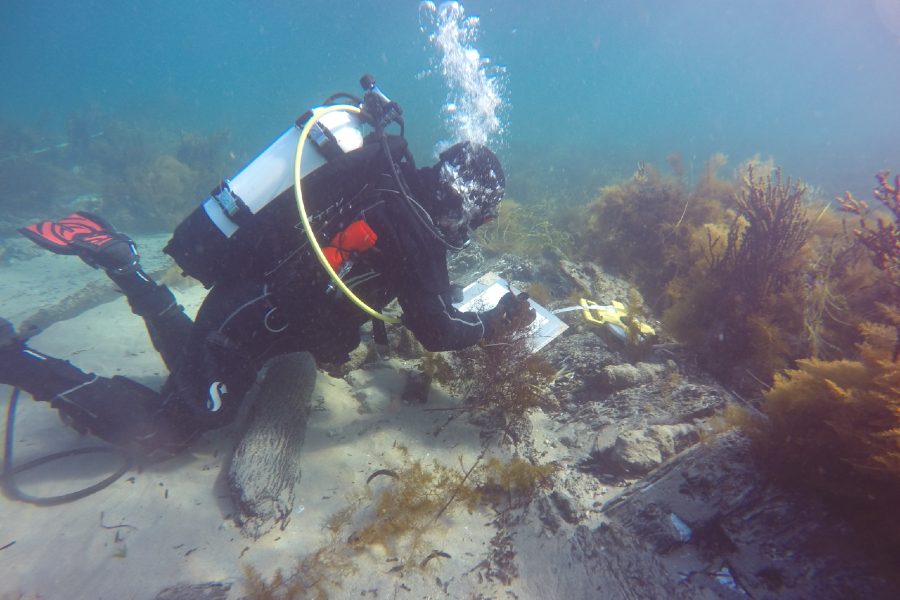 Kieran: Archaeology is a really interesting discipline, in that you can go through university, do your course and then come out, but you still don't actually know how to be an archaeologist. If you are thinking of becoming an archaeologist you should get as much field work in as you can.

So that starts early, you don't have to be to be an archaeologist to go on field trips. So in my case, I joined an amateur archaeological association in Western Australia, long before I went to uni, so I got experience working in the field and that really helped me for when I got to university to actually study archaeology.

Also diversify your experience. We don't spend all our time sitting in the office or sitting in a library, we do a lot of practical fieldwork. And so you get experience with things like living outside, driving vehicles, learn how to change a tire, get a first aid certificate, if you're becoming a maritime archaeologist, upgrade your diving qualification so you're more usable, get a boat driver's license – these are all very very useful skills that you can take into the field with you.

View all posts by Laura Signorelli→
Posted in: Maritime Archaeology