Our latest exhibition Here: Kupe to Cook dismantles misconceptions about the discovery of Aotearoa (New Zealand) and provides a deeper understanding to the people and places of the Pacific Ocean. While many of us are already familiar with James Cook, perhaps you’re wondering who Kupe was?

Many Māori iwi (tribes) believe that Kupe was the first Polynesian to arrive in Aotearoa (New Zealand) about 1,000 years ago. While stories differ from region to region, according to tradition, Kupe’s voyage across the Pacific Ocean was due to his pursuit of a great octopus that was troubling his homeland of Hawaiki (Tahiti). With food becoming scarce as his people were unable to catch any fish, Kupe decided to set out in his canoe and kill the octopus. With his wife Hine-te-aparangi, companion Ngake (or Ngahue) and a crew, Kupe chased the octopus across the Pacific Ocean, eventually landing in Aotearoa to re-supply. It is said that his wife came up with the name of Aotearoa, meaning ‘long white cloud’ after seeing the clouds that formed over North Island.

A great battle followed with the octopus at the mouth of Te Moana o Raukawa (Cook Strait), where Kupe succeeded in killing it. Kupe then travelled in the south Wairarapa, Cook Strait and Northland regions, naming many places as he went. This includes Arapāoa, Mana, the islands Matiu (Somes Island) and Mākaro in the Wellington region, and Kohukohu, Pouahi, Maungataniwha and Hokianga in the north. These names have been preserved by generations of Māori who settled the regions. 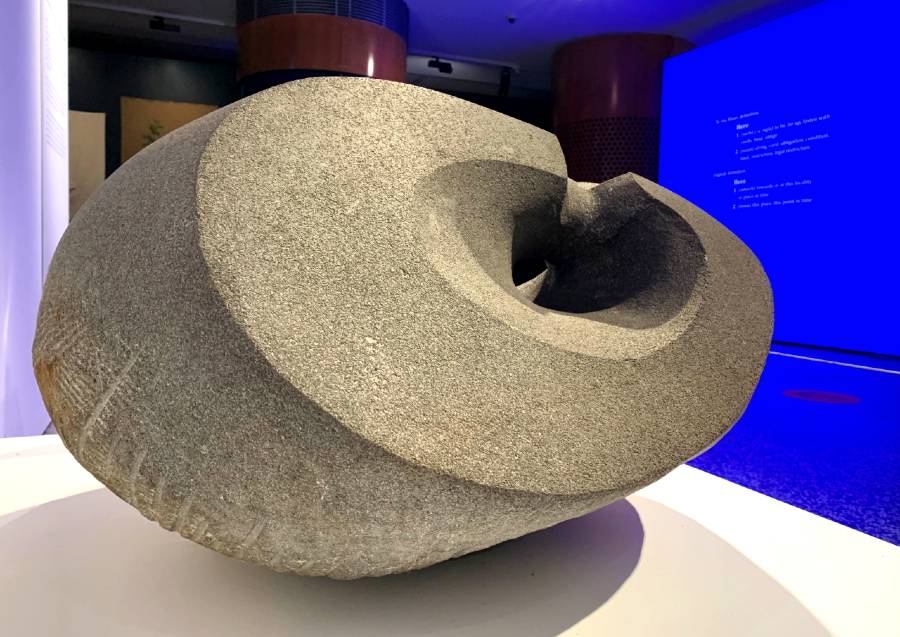 Replica of Kupe's anchor stone by Māori clay artist Wi Taepa at the entrance of Here: Kupe to Cook

According to Māori tradition, Kupe brought two anchor stones from Hawaiki in his waka-hourua (double-hulled canoe) named Matahorua. One of the anchor stones, Maungaroa was sourced from the Tatara-a-punga stone, taken from the hill Maungaroa in Rarotonga from where it takes its name.

While at Porirua harbour, Kupe exchanged the anchor stone for a local stone that he could take back to his homeland. It was then deposited on the beach and renamed Te Huka-a-Tai. The stone remained for many centuries, until the 1840s when European-New Zealand soldiers stationed at the barracks in Porirua started chipping pieces off the stone. These soldiers are said to have drowned not long after in a boating accident. An object of reverence by local Māori, some believe the soldiers were cursed for disrespecting the ancestral stone.

The stone is now part of the Taonga Māori collection at the Museum of New Zealand Te Papa Tongarewa and stands as one of New Zealand’s rarest and oldest artefacts.

Among the works by New Zealand and Australian contemporary artists in Here: Kupe to Cook is a replica of Kupe’s punga by Wi Taepa. Kupe’s arrival to Aotearoa is an important event for Māori, and his anchor stone has become a physical symbol of genealogical links that underpin their ongoing relationship to the land and seas. Having Wi Taepa’s anchor stone at the entrance of the exhibition therefore provides a focal point for conversations around Oceanic exploration and ideas of ‘discovery’.

View all posts by Laura Signorelli→
Posted in: Indigenous , Exhibitions
↑