This month a 13-metre-long dugout canoe suspended from the ceiling will be the centrepiece in our new gallery Under Southern Skies. The huge, sleek wooden canoe with a carved crocodile head prow is from the Sepik River in Papua New Guinea (PNG). But how did this unique canoe come to be part of the museum’s collection? 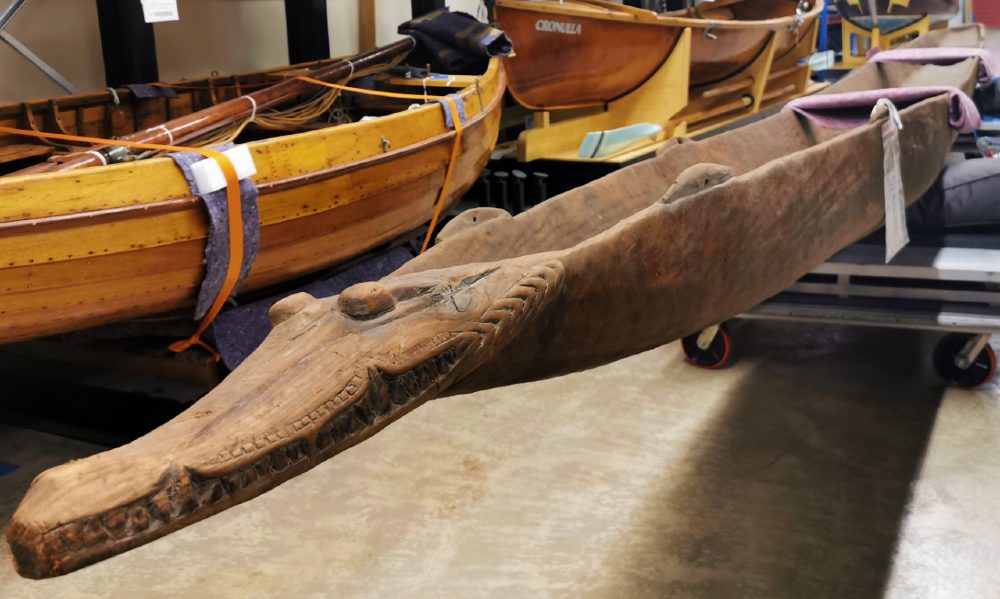 From restaurant to museum: The journey of the canoe

From 1949, Papua New Guinea was technically under the control of Australia, which administered the Territory of Papua and New Guinea after its occupation by Japan in World War II. By the 1960s, there was an increasing push for full independence from inside Papua New Guinea and from growing numbers of Australian supporters. Despite reluctance from some areas of government and business interests, full independence finally occurred in 1975.

Australians had been interested in cultural objects from Papua New Guinea ever since early anthropologists began collecting material there in the late 19th century. Australian soldiers during World War I were renowned for almost wiping out the famous Bird of Paradise species for souvenir feathers. By the late 1960s, there was still a strong interest in collecting ‘exotic’ artefacts from the country, and at an annual ‘Papua New Guinea Week’ event in 1969, a Sepik River canoe was a highlight of the celebrations – being paddled around Sydney Harbour.

After the event it seems many of the PNG objects were sold. The canoe, along with other items, was purchased for a ‘Pacific-themed’ restaurant in North Sydney. By the mid-1990s, new owners of the restaurant decided to offer the artefacts to the Queensland Museum, but the huge canoe remained. Despite some initial hesitation from curators about the canoe’s relevance to Australian history, the Maritime Museum was seen as a natural place for such a majestic watercraft.

Since 1999, the museum has had this wonderful dugout canoe in its collection. For many years it remained in the museum’s large object storage area, cared for by conservators, but neglected by curators. Visitors on behind the scenes tours would remark on it, but the canoe sat there, holding its stories of origin and cultural belonging. The canoe was collected at a time when cultural objects from places such as Papua New Guinea were considered as 'colourful items' to decorate restaurants with, rather than holding significant historical and cultural meanings for the people who crafted them.

In 2020, with the development of a new exhibition on voyaging and navigating in and around Australia’s oceans, it was finally considered for display. But the logistical issues in moving, suspending and caring for the canoe on display were many. But importantly, the first hurdles were to understand the history, meanings and current connections with the Sepik River communities where the canoe originated from.

Tracing connections and communities through time

So the Indigenous Programs staff and curators at the museum began to research its history and reach out to the communities where these canoes were once a major cultural and economic part of. The mighty Sepik River is one of the great rivers of the world stretching 1,126 kilometres and is one of the largest and most intact freshwater basins in the Asia Pacific region. It is generally divided into three regions of the Upper, Middle and Lower Sepik. Important waterbird and crocodile populations are supported by the 1,500 lakes and other wetlands associated with the river basin. These diverse habitats are globally significant for their biodiversity.

Local villagers have used the Sepik River since ancient times for water, fishing, and transportation. Nowadays however, fibreglass dinghies equipped with 40-horsepower outboard motors are a common sight along the River. But these dugout canoes are still being made. Where fuel and engine maintenance may not be viable; dugout canoes are still paddled along the River – some with carved designs and crocodile prows. Women travel in canoes with children and infants to sell their produce and woven basketry at markets and skilled children propel their own little dugouts while fishing along the river. Tourists from around the world seeking an ‘authentic experience of a Sepik Adventure’ have also ironically perhaps added to their continued construction.

These canoes were dug out from a single tree and large ones such as this could be paddled by 25 people. The Sepik people are renowned for their wood-carved art as featured in the dugout, where builders carved out the tree using a stone adze. The hull would also be burned out with fire to seal it and also to burn off any pests. The vessel was elaborately decorated with the crocodile-head prow shaped according to the tradition of the area.

The people’s connection to the River is deeply spiritual and central to their lives. The Sepik people share a totemic connection with crocodiles that also feature prominently in the legends and rites of passage of various Sepik tribes.

Crocodiles play an important role to the art and culture of Middle Sepik River communities, who are often termed the latmul today. Some of the stories of the people of the Middle Sepik River describe how the world was once covered in a single ocean into which the crocodile dived and brought back mud from deep under the sea. This mud became the first land. The land slowly grew, resting on the back of the Ancestral Crocodile, who still sometimes moves, causing earthquakes. The Ancestors of the Middle Sepik people embarked on a series of historic ocean migrations, naming all the trees, mountains, villages, winds and stars.

A long history of trade

The Middle Sepik River is a long way from the ocean, but similar large dugout canoes from coastal areas of Papua New Guinea were capable of ocean going voyages, often made into outriggers. A long history of intricate trade networks and resource bartering existed between neighbouring Torres Strait Islanders. Through extensive relationships with coastal PNG communities, the Islanders embarked on diplomatic missions to acquire tree hulls for their water transport. 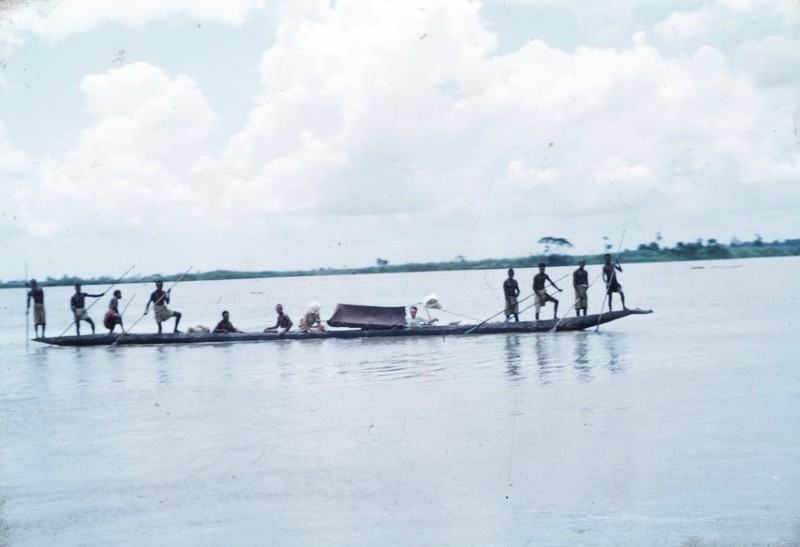 Items of exchange could range from cultural items for use in ceremony such as bird plumage, Kundu Drums, snake skins and woven mats. Other items such as yams, spears, and seafood were also exchanged which continues today and is recognised under the Torres Strait Treaty.

Importantly, there is continuous oral evidence of the long distance exchange voyages between the Torres Strait and river estuaries of PNG and the canoe trades. These oral traditions form a record of the patterns of journeys of people as both traders and migrants.

These oral histories document movement prior to the arrival of the London Missionary Society to the Torres Strait in 1871 between Makassans and Papua New Guinea. Islanders recount these histories through song and dance where often the items such as large feathered headdresses and bows and arrows are used in the storytelling.

The life journey of the canoe itself is important. From the beginning the tree was identified for harvesting, and songs would be sung as it began its journey to the community for building. The canoe would then cross many hands to its new place in different waters – sometimes hundreds of kilometres away across the ocean. Islanders observances of the seasons would dictate when journeys would take place including the understanding of the turbulent current which flows throughout the Strait from the Coral Sea to the Timor and Arafura Seas. A naming ceremony and other protocols would occur before a vessel was launched into water.

These overseas connections with northern Australia are a focus in the new Under Southern Skies gallery opening at the museum this month. The oceans around Australia were a swirl of cultural contact long before the first Europeans arrived. In the Torres Strait, trade with Papua New Guinea included ceremonies that were adopted and exchanged. As renowned Torres Strait Islander artist Billy Missi described it, both peoples were ‘linked in many ways’ and Papua New Guinea has had a strong impact on Torres Strait Islanders lives, history and culture.

From Torres Strait Islanders to Muslim Makassan traders; from Polynesian sailors to Europeans observing the transit of Venus, ocean voyagers have been navigating the seas, islands and coasts around Australia for millennia. The Sepik River canoe, once an object adorning a restaurant, now has a new life in a gallery that tells the stories of Indigenous and European navigators united by a common thread – the planets and stars under the southern skies. It is a symbol from the past that strikingly brings us into the present where steps are now being taken to rebuild the integrity of its story. Importantly, the canoe draws Australian, Pacific and other First Peoples into conversations about their histories, stories and relations across the oceans.

Header image: Entry to the exhibition Under Southern Skies, with the Sepik River dugout canoe visible on the right. Photography by Andrew Frolows/ANMM

View all posts by Helen Anu and Stephen Gapps→
Posted in: Indigenous , Exhibitions
↑