If you have already visited our exhibition, Bligh – Hero or Villain?, you may have seen the Wedgwood blue jasper cameo of Sir Joseph Banks. But why is there a cameo medallion of Joseph Banks in an exhibition about William Bligh?

Patronage was an important aspect of many professions during the 18th and 19th centuries, especially in the navy. Without family connections or patronage a mariner could advance only so far, no matter how experienced or capable he was. William Bligh benefited greatly from the patronage of Sir Joseph Banks. Bligh's relationship with Banks developed when he was appointed commander of the HMS Bounty, an expedition Banks helped organise and plan in order to transplant breadfruit plants from Tahiti to the West Indies. Later, in 1805 Banks helped Bligh secure the governorship of New South Wales, writing: [1]

... I was this day asked if I knew a man proper to be sent out in his stead – one who has integrity unimpeached, a mind capable of providing its own resources in difficulties without leening [sic] on others for advice, firm in discipline, civil in deportment and not subject to whimper and whine when severity of discipline is wanted ... I immediately answered ... I know of no one but Captain Bligh who will suit. 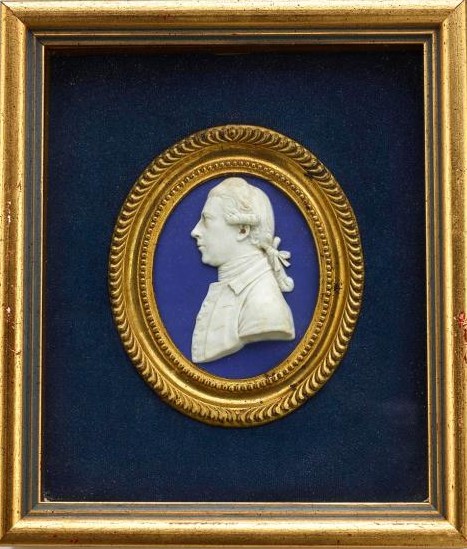 When Josiah Wedgwood invented the iconic jasper ware in 1774 it opened new opportunities for the company in terms of its product range and was seen as an 'artistic triumph'. Wedgwood produced large numbers of blue jasper portrait medallions during the 18th century. In the 1774 catalogue, Josiah Wedgwood launched a new portrait series titled 'Heads of Illustrious Moderns from Chaucer to the Present Time'. By 1779 the series featured 177 famous men and women, and by 1787 this had risen to 228. These portraits, referred to as portrait medallions, were modelled by a series of exceptional artists, including Joshua Reynolds and John Flaxman, who modelled Sir Joseph and Lady Banks.

Preserving a piece of history

We spoke to museum conservator Jeffrey Fox to find out what happened behind-the-scenes to get the cameo of Joseph Banks exhibition ready:

When the cameo medallion was brought to the Conservation Laboratory, it was housed in its original frame and backing, the velvet was dusty and the cameo itself was quite dirty. When I spoke to the curator of the exhibition, Dr Nigel Erskine, he wanted it to look of its time – not brand new – so we decided we wouldn’t clean the actual porcelain cameo itself. For example, in the earhole, it looks like there is a big hunk of wax in there, but it’s actually just dirt and debris that has been collected over many years. 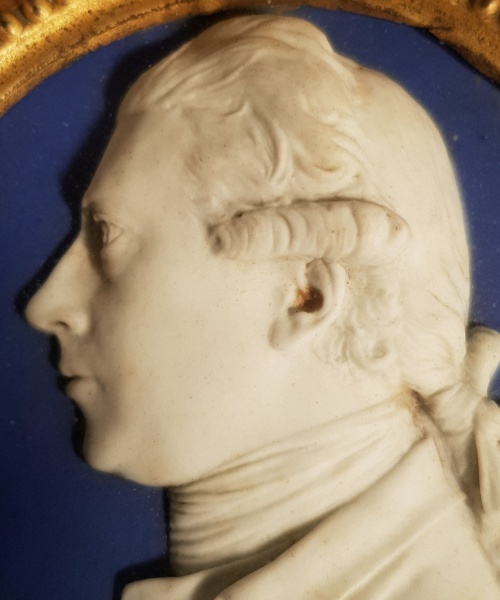 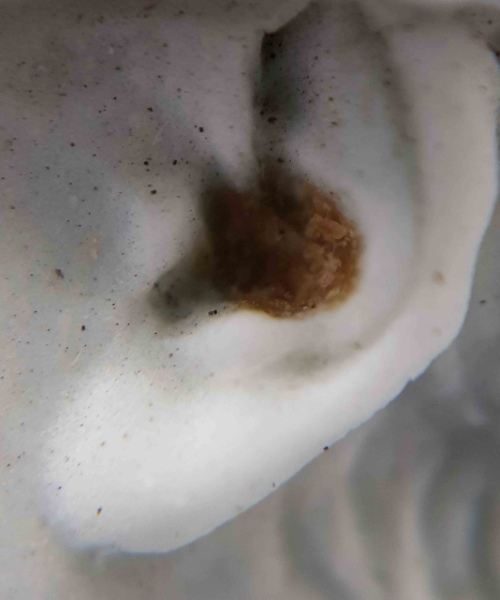 While it may look like Joseph Banks’ has a significant amount of earwax, it is actually just dirt and debris that has been collected over the years. ANMM image

Similarly, there are some areas of the frame where the gilding has just been lost over the years or it’s has discoloured. As we’re not in the practice of restoring things to make them look brand new, we left this as is. 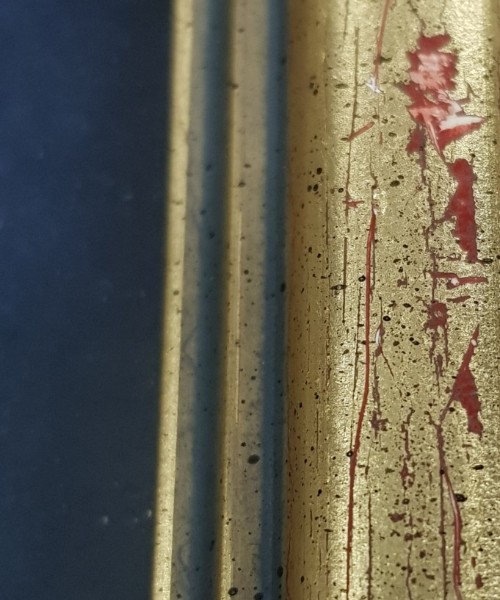 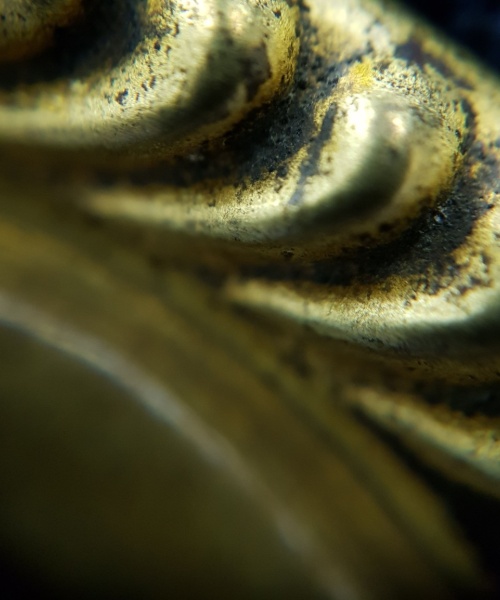 Photographs showing the damage and loss of gilding on the frame. You can see a red colour underneath the damaged areas – this could be a red bole layer (clay-like substance) used to enhance the tone and lustre of the gold leaf when it was polished/burnished. ANMM image

The main purpose of our treatment is to preserve the object and ensure it is safe for display. Listed below are the methods I used to ensure this:

There was a green plastic backing on the back of the cameo housing, which was definitely a modern material. It was similar to a vinyl and had a self-adhesive backing. You can see around the edges in the image below that there’s a lot of double-sided tape that has just been reapplied over the years. This green backing covered the back of the frame entirely, with a cut-out so you could still see the provenance details.

I spent around three to four hours removing the double-sided tape as I was going to leave the backing on but with the adhesive residue removed for display. So I used a special scalpel and spatula to pare back layer after layer until I hit the back of the green vinyl. This had its challenges as it was covered in adhesive residue (just like if you were to remove a sticker from a glass or piece of plastic and it leaves that sticky residue) so I had to use a crepe eraser and roll it onto the adhesive. This is quite a laborious process but it picks up all the adhesive and you end up with a ball of black goo.

It was later decided that the backing didn’t add any value to the object for exhibition because no one would be able to see it. Not to mention, the backing could damage the object if any remaining adhesive pulled the fibres away from the blue velvet itself. Because of this, we decided to remove it entirely and put on an acrylic backing made from Optium Acrylic® which is shatterproof and offers high-grade UV protection. The green vinyl backing however, has been retained as part of the object’s history. 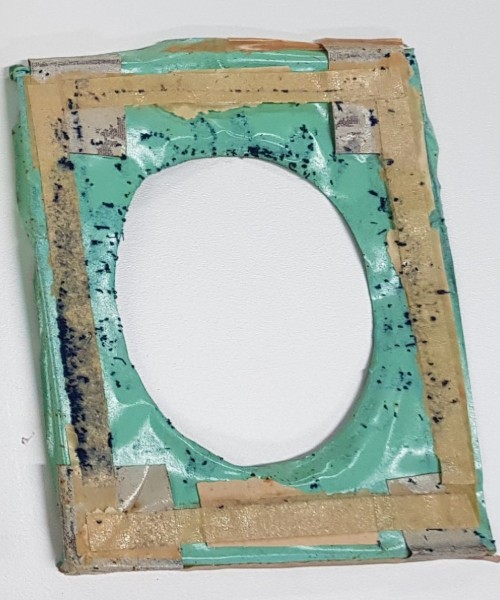 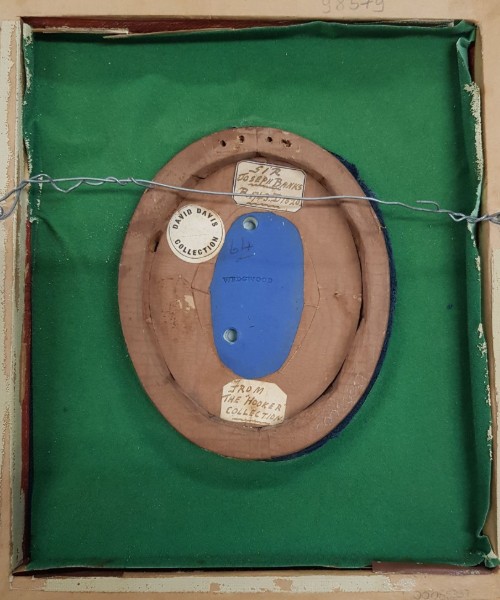 The left image shows the green vinyl backing with many additions of double-sided tape. You can see the blue velvet fibres that have attached to the backing. This backing covered the back of the frame (image on the right), with a cut-out so you could still view the provenance details. ANMM image

We came up with this design (see image below) so we could secure the entire cameo insert into the frame. Previously, the cameo wasn’t secure – it just had the single wire backing to keep it in place. So you could have pushed it through from the front and the whole thing would have fallen out. So because it was going on display and it will then be travelling, we decided it had to be secured properly. We removed the wire and added a clear acrylic backing that successfully holds the cameo in place and keeps it secure – all the while you can still view the provenance information.

We also used the original screw holes that held the wire to secure the clear backing, so we didn’t create any extra holes or damage to the object. 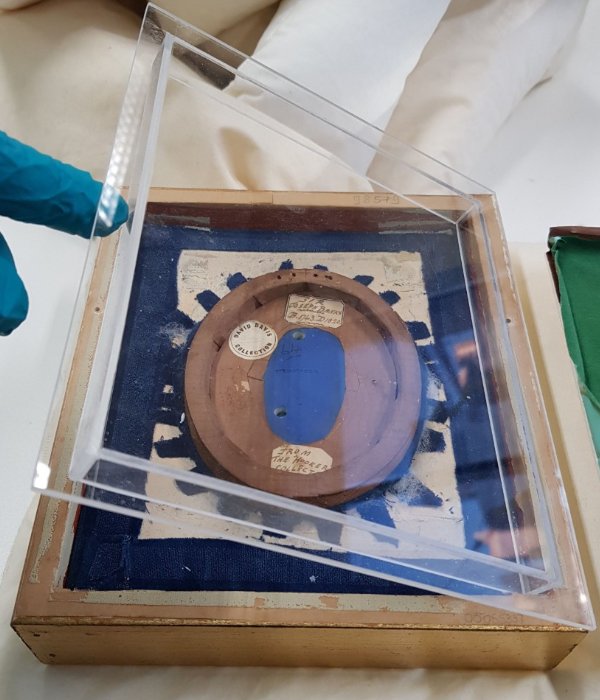 The clear acrylic-backing that now secures and supports the cameo. ANMM image

I then brush vacuumed the cameo and the blue velvet pillow that it sits on. This is where you get a really low-suction vacuum and you get a brush and slowly sweep off the small dust particles. The velvet required majority of the surface cleaning as it had attracted a lot of dust over the years which goes in-between the fibres of the velvet. I had to be quite careful because the suction from the vacuum doesn’t get all of the dust particles from inside. This presented a bit of a problem so as a solution, I put a netting cover over the vacuum so the mesh would stop anything that shouldn’t get through.

Be sure to visit Bligh – Hero or Villain? where you can not only admire the Wedgwood cameo of Joseph Banks, but understand and appreciate the work Jeffrey put into the piece to get it exhibition ready. Bligh – Hero or Villain? challenges the popular narrative, looking beyond the Bounty mutiny to explore the many sides of this infamous maritime figure.