Opening later this month, Capturing the home front brings wartime images by Dorothea Lange and other World War II photographers to the museum as part of the 'War and Peace in the Pacific 75' commemorative program. Richard Wood previews the exhibition.

My own approach is based upon three considerations: First – hands off! Whenever I photograph I do not molest or tamper with or arrange. Second – a sense of place. I try to picture as part of its surroundings, as having roots. Third – a sense of time. Whatever I photograph, I try to show as having its position in the past or in the present. (Dorothea Lange)

Famous American photographer Dorothea Lange established her reputation as a documentarian when commissioned by the United States government to travel the country in the 1930s to record and reveal the devastation wrought on Americans by the Great Depression.

Using available light and aiming for a candid record, she would make herself and her camera known to her subject and gauge their reaction before taking a picture or deciding to walk away. It’s the fleeting intimacy of these unplanned encounters that still engages us today.

Her photograph of Frances Owens Thompson, titled ‘Migrant mother’, humanised the plight of families travelling across the country searching for work and is now considered one of the 20th century’s most significant photographs. In 1936 Lange photographed 32-year-old Thompson and her children in a roadside ‘pea pickers camp’:

I saw and approached the hungry and desperate mother in the sparse lean-to tent, as if drawn by a magnet. 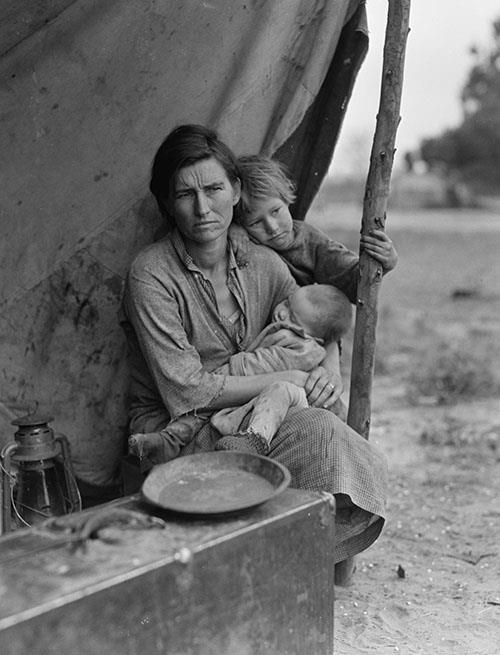 Dorothea Lange's famous portrait of Frances Owens Thompson, titled 'Migrant mother'. She and her husband and their seven children were migrant agricultural workers, without food and on the road searching for work. Library of Congress LOC 8b29525u

The exhibition includes prints from the ‘Migrant mother’ series and other Great Depression images, which serve to introduce Lange’s wartime work documenting the home front as a staff photographer of the US Office of War Information (OWI).

Lange’s photographs of wartime Oakland and Richmond in California depict couples arguing in trailer camps, female shipyard welders, paperboys and 24-hour cinemas catering to exhausted shift workers. They capture the proud realities of the American home front and war effort on ‘main street’, in shipyards and on farms, to support the positive ‘war effort’ message promulgated by the OWI.

Lange’s pursuit of social justice through photography began during the Great Depression, but her unvarnished depictions of the forced internment of Japanese–Americans in 1942 proved controversial and were deemed unsuitable for public consumption during the war.

Under President F D Roosevelt’s Executive Order 9066 issued on 19 February 1942 (coincidentally, the day that Darwin was bombed), around 110,000 Japanese–Americans living along the west coast were compulsorily relocated to remote inland internment camps.

Lange’s photographs from early that year follow the internment process. They show hastily boarded-up shops, piles of luggage in the streets, bewildered and bemused families queuing to board buses to unknown destinations, and their early life behind barbed wire at the desolate and climatically extreme Manzanar camp in central California.

Her work was harsh and unflattering and the Office of War Information suppressed it.

Lange’s close friend and contemporary Ansel Adams also photographed the Manzanar camp in mid-1943. He published his work in a Museum of Modern Art (New York) exhibition and the book Born Free and Equal: The Story of Loyal Japanese Americans in 1944 – while war with Japan still raged – to great controversy and condemnation. 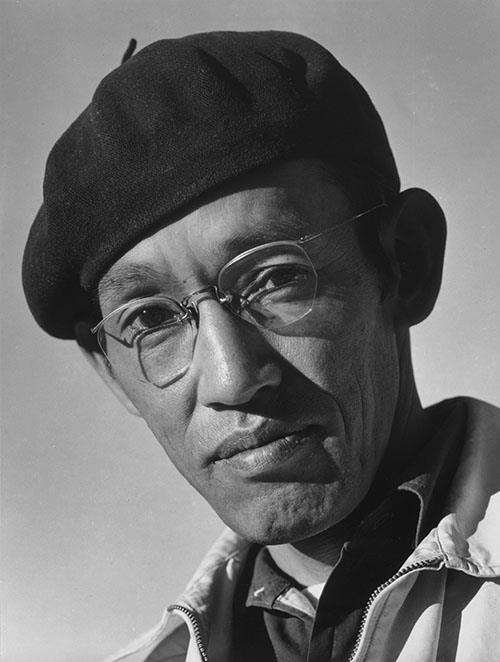 The exhibition includes works by Toyo Miyatake, a professional photographer and internee at Manzanar, who smuggled a camera lens and film-plate holder into camp and built a wooden box camera that he kept secret for nine months.

He eventually asked camp director Ralph Merritt if he could set up a photo studio. Merritt consented with the proviso that Miyatake could only load and set the camera; a Caucasian assistant would then snap the shutter, to avoid any potential accusation that an internee was taking pictures against the rules.

Miyatake was a student of seminal US pictorialist photographer Edward Weston. In an ironic contrast to Lange’s raw documentary style, Miyatake’s photographs emphasise tonality and composition and benefit from capturing life in the camp after things had settled down.

Complementing the American content of the exhibition are prints reproduced from Australian photographic collections of Japanese internment, industry, family and country life on our side of the Pacific. 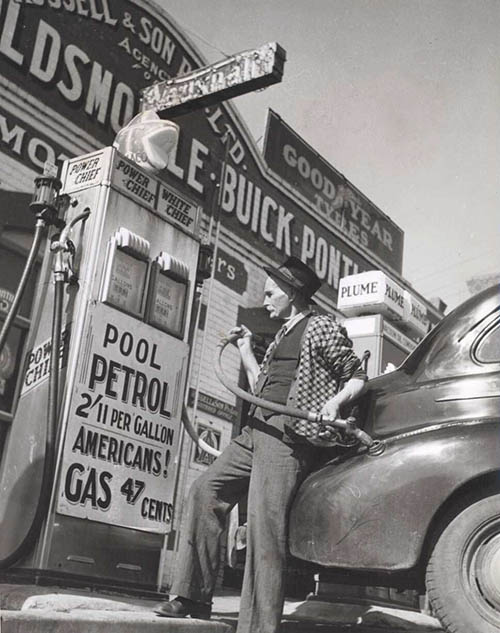 William Russell putting the four-gallon (18-litre) monthly ration of petrol into a customer's car, Drouin, Victoria. For the benefit of the American military, the petrol station's sign translates 'petrol' into 'gas' and converts shilling and pence into the American equivalent. Photographer Jim Fitzpatrick. National Library of Australia nla.obj-147029034

These include evocative wartime photographs of Sydney Harbour by Sam Hood from the museum’s collection; William Cranstone’s modernist depictions of Australian wartime industry; Hedley Keith Cullen’s photos of Japanese internment at Barmera in South Australia, from the Australian War Memorial; and Jim Fitzpatrick’s idealised essay on wartime life in the Victorian country town of Drouin in 1944, from the National Library of Australia.

Opening on 30 October 2019, Capturing the home front is the museum's latest photographic exhibition that shows life during the war.

Twenty-five original Dorothea Lange prints in the exhibition are on loan from the Museum of Contemporary Photography, Columbia College, Chicago, and the Estate of Katharine Taylor Loesch.
Original Toyo Miyatake prints are on loan from Mr Alan Miyatake, Toyo Miyatake Studio. Other Dorothea Lange prints are reproduced from the Library of Congress, the US National Archives and Records Administration and the Oakland Museum of California.
Capturing the home front is part of the War and Peace in the Pacific 75 commemorative program. Supported by the USA Bicentennial Gift Fund.

View all posts by Richard Wood→
Posted in: Exhibitions
↑