There is something about 'the deep' and 'prehistoric monsters' that sparks your imagination and brings out your inner child. For our latest exhibition, Sea Monsters: Prehistoric Ocean Predators we sought out the help of three 'kid curators' so they could share stories of sea monsters from their own perspective.

The insightful research and drawings of Jonah (12), Kai'zen (11) and Ki'lulu (9) can be found scattered throughout the exhibition. We caught up with the monster-mad kid curators to find out their favourite sea monster and why people should care about these prehistoric predators?

Ki'lulu: Because I think there is so much to learn and it's a fascinating topic.
Jonah: Because there are many different sort of ways that we can think about it, like we can think about them as how humans evolved because sea monsters were the first things to ever roam the earth. And it also explains a lot about the wildlife that we have today, like how whales came from the water then walked on land and then went back to the water.
Kai'zen: I swim a lot in the sea and I think it's really cool to know what swam there before us 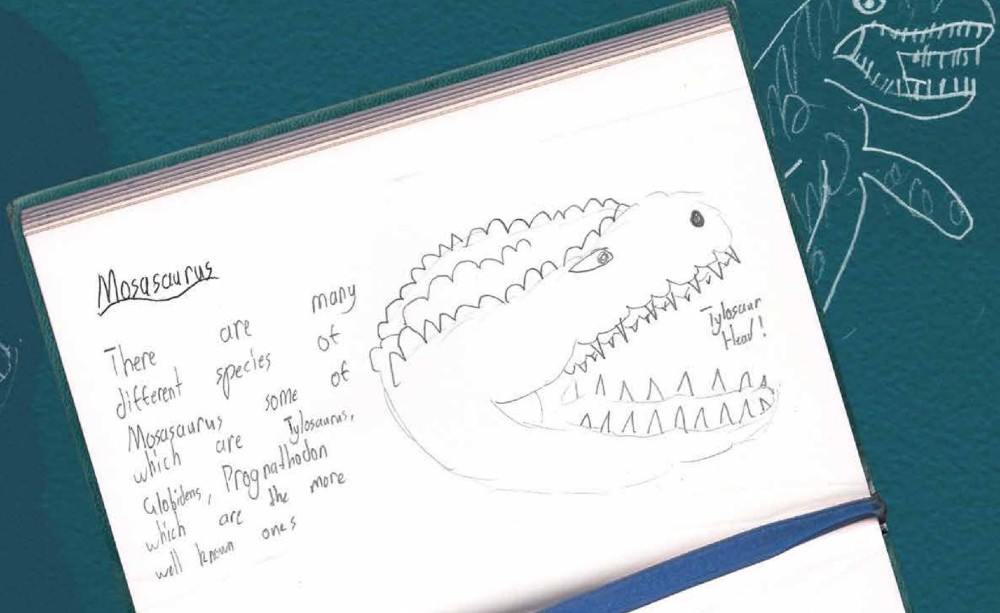 One of Kai'zen's drawings and notes about the Mosaurus. His research, along with Jonah's and Ki'lulu's, can be found throughout the exhibition [ANMM image]

What's the most amazing thing you've learnt about sea monsters?

Ki'lulu: How much bigger they were compared to everyday ocean animals.
Jonah: Probably that mosasaurs were cannibals and how they were just ruthless predators that would just hunt for sport pretty much.
Kai'zen: I think it’s really strange that they (they as in 65 million years ago under the sea) have so many massive whale eating carnivores and we have so little giant creatures but we have the biggest?

Why should people care about sea monsters?

Ki'lulu: Because it’s nice to know you had some pretty cool animals living in the same waters we swim in today but way back then.
Kai'zen: I think people should care about sea monsters just in case Jurassic park happens in real life, I feel the sea monsters would escape first!

What do you think would be the coolest and worst thing about being a palaeontologist?

Ki'lulu: The coolest thing would be that we already know stuff but there is still more, and the worst would probably be that you might dig up way more than one of the same dino and it would get boring.
Jonah: The coolest thing would probably be going out in the field and digging up the fossils. I guess the worst thing would be the wait of just trying to find something and how long it would take. Like you’ll be digging for days and months to find something. I think it would be a pretty good job anyways, I want to be a palaeontologist.
Kai'zen: The best thing would obviously be discovering tons of new dinos, or bringing a dinosaur back to life without Jurassic Park happening. 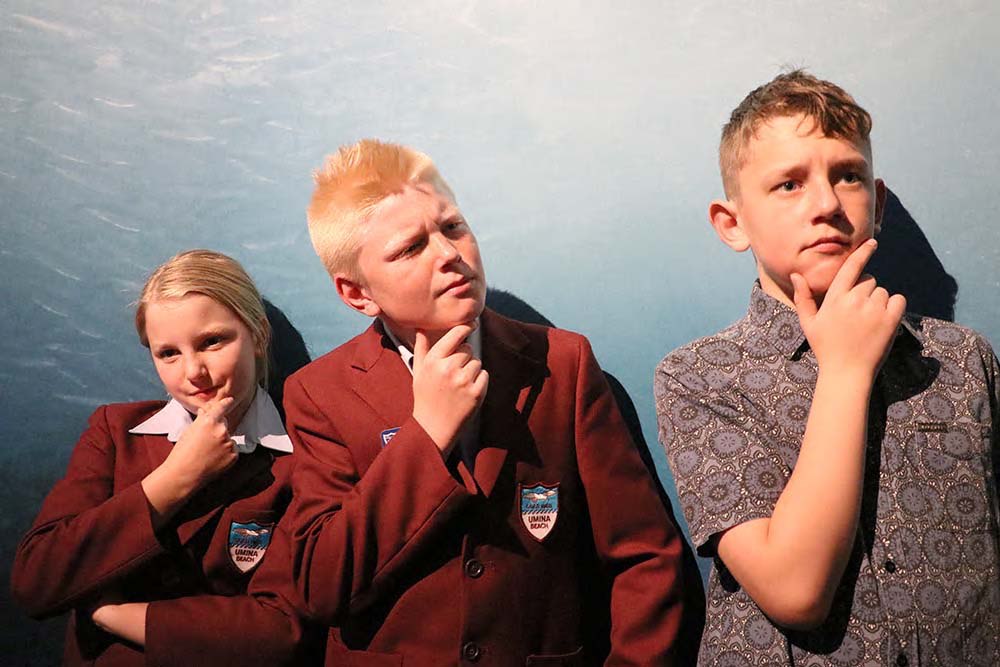 Ki'lulu: My favourite sea monster is probably the Shonisaurus. Its one of the biggest sea monsters and as you walk around the exhibition there's a big head of the Shonisaurus and you'll see how big it really was.
Jonah: It would probably be the Xiphactinus, nicknamed the 'nightmare fish'. It's one of my favourites because it's completely different to all the other sea monsters in size and shape. It could eat 70 per cent of its body weight as it didn't really have a throat, and open its mouth around 90 degrees.
Kai'zen: I don't really have a favourite but if I had to pick it would definitely be the Mixosaurus because it has a really funky name and I reckon someone could make a pretty cool song out of it.

What sea monster do you think would have been the most terrifying?

Ki'lulu: The Megalodon because it was heavy and huge and when I first heard of it even I freaked out sooooooooooo much.
Jonah: Probably a Livyatan because that was almost as big as a blue whale and it was like a sperm whale – it had giant teeth and it could just chomp ships in half if it was around today.
Kai'zen: Pretty much anything big, uncontained and with sharp teeth!

Make sure you visit Sea Monsters: Prehistoric Ocean Predators these school holidays so you can read the fascinating work of our curious kid curators! The exhibition brings together real fossils from millions of years ago, gigantic life-sized casts from real specimens, immersive multimedia and hands-on interactives that bring these ancient monsters of the deep back to life.

View all posts by Laura Signorelli→
Posted in: Sea Monsters
↑