Michelle Lee describes herself as an 'average Joe Blow girl that doesn’t do anything special', but her impressive athletic feats say otherwise. Lee has completed a nine-day trek covering 160 kilometres to the peak of the Annapurna Circuit through the Himalayas, trekked the 96-kilometre Kokoda Track in five days, is the current world record holder for the one million metre row (five days, 21 hours and 34 minutes) and was the first Australian woman to row solo across the Atlantic Ocean in the Talisker Whisky Atlantic Challenge in 2018.

Before Michelle Lee speaks at our next Ocean Talk, Extreme Journeys, I caught up with her at the Sydney International Boat Show to find out what drives her to take on such momentous challenges and what she has her eyes set on next.

What drives you to undertake your challenges?

My biggest motivator is I do not want to die wondering. I’d been plagued for two years with this idea of rowing across the Atlantic Ocean, and it was so consistent and persistent that I woke up one day and decided if I don’t do this, I’m going to die wondering – and what a waste that would be.
I finished reading Rowing the Atlantic [by Roz Savage] and decided that was it. I rang my friend and said, ‘guess what I’m going to do? I’m going to row across the Atlantic Ocean – I don’t know how but I just know I need to get a boat.’

So be careful what you read – you read a book and next thing you know you’re rowing an ocean! 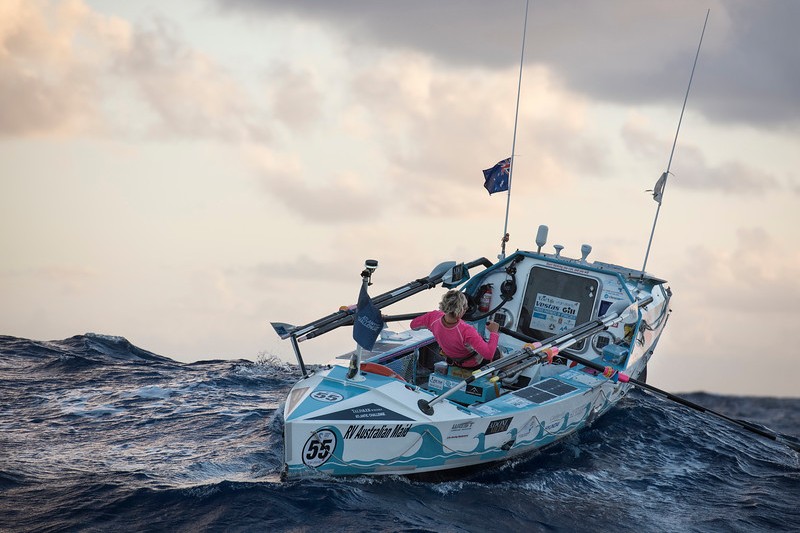 Is there an adventurer past or present who inspires you?

Definitely Shackleton, what he achieved in those conditions – phenomenal! I listened to his book [South: The endurance expedition] four times when I was rowing across the Atlantic Ocean. It’s a 17-19 hour recording, and I was in tears every time I listened to it. I was under the elements of Mother Nature while listening to his book, and it was like I was putting myself in it – it really made me appreciate what he went through 10 times more, and it wouldn’t have had the same effect if I read it on land.

When speaking to Tony, my designated person ashore (DPA) on the phone, I told him I was listening to Shackleton and he said, ‘don’t even think about it, don’t you dare think of rowing to the Antarctic’ – because you’ve got to be careful what you read, otherwise next you know you’ll be doing it.

Do you think female athletes face more challenges to success compared to men, especially when it comes to sponsorship and media?

While being here [at the Sydney International Boat Show], I’ve had men come up to me and say, ‘this is the boat that went around the world’ and I say, ‘no it didn’t, I took it across the Atlantic solo.’ I had one man who looked me up and down and said, ‘what you? A sheila, get #%$#ed’ and he turned around and walked away.

I could write a full page of one-liners just like that of all the different scenarios that have happened. It’s hard enough for some people to believe a man can do it, let alone a woman. I had never rowed before so I had to battle with sponsors.

I broke the world record for the million-metre row to prove myself and to say to sponsors, here’s my determination, here’s my grit, here’s my integrity – I finish what I start and I do what I say I’m going to do, so back me. I feel like I had to do extra to get that little bit … I hope this will make it a bit easier or pave the way for others that might want to come on board now.

I think it is tougher for girls because there’s that typical thought process of ‘what a girl?’ – which makes it even more special that I actually did it. I want women to look at what I’m doing and think, ‘if she can, I can.’ I’m just an average Joe Blow girl that doesn’t do anything special – I’m not an Olympian. It all comes down to the drive, the want – I bring it back to integrity – do what you’ll say you do. You’ve got to have a really good ‘why’ and just keep your eyes on the prize … that’s what I did. 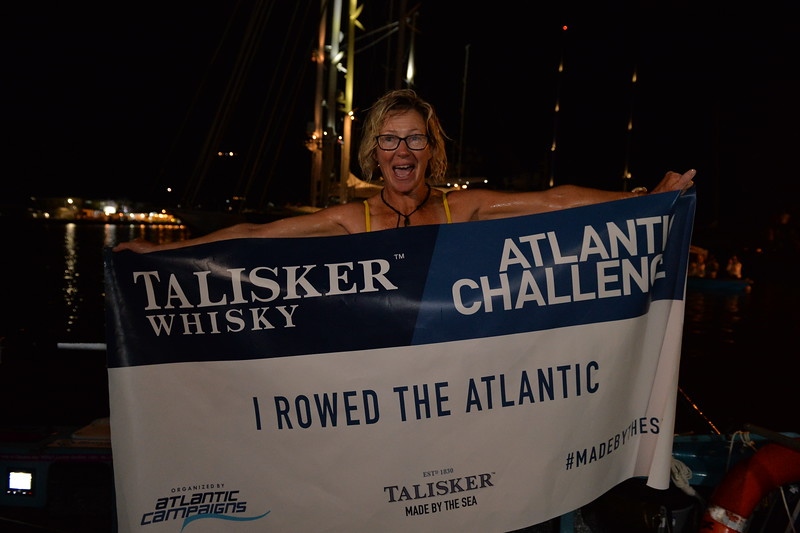 Victory! An ecstatic Michelle after finishing rowing across the Atlantic Ocean. Image courtesy of Michelle Lee

Why do you think people are drawn to extreme challenges?

I think personally we’re bored. I just think we’re bored of the mundane Monday to Friday, nine to five certainty – I know what my day looks like, I know how it’s going to end and I’m going to do the same thing tomorrow – and I was bored out of my brains with that. There’s just something that wants you to burst out, like a caged tiger.

I think part of my personality is I love freedom and adventure, and I don’t like being told what to do. So I think it comes down to personality traits in the end and it gets to a point where there’s no return and you have to go and seek stuff out.

Do you have your eyes set on a new challenge?

I made a lot of mistakes during my Atlantic row, just because there were so many things I couldn’t have possibly known until I did it, so I feel compelled to do one more ocean row.

My mind is going towards the Pacific which is big – it’s a nine to 12 month journey. I think it would be so cool to roll into Australian shores and inspire a nation. My motto is ‘start thinking you can and you will’ so it would be great to show Aussies what we can do.

I feel like I need to recreate something as my normal isn’t appealing anymore – I feel like I’m walking around in circles and not really achieving anything. I need to hurry up and make up my mind because if I’m going to row the Pacific that’s in June 2021 and I have so much I need to do, and I would have to do a lot of work mentally as well.

But I am open to anything, I’d love to do some hiking – really long distance stuff like the Pacific Crest Trail or the Camino de Santiago.

Want to know more about Michelle Lee and her 68-day voyage across the Atlantic Ocean? Be sure to attend our upcoming Ocean Talk, Extreme Journeys where Lee will delve deeper into her highs and lows.

View all posts by Laura Signorelli→
Posted in: Events
↑