A few weeks ago, I wrote about the Irish orphan girls who arrived in Sydney on the Digby on 4 April 1849, at the height of the Great Famine. Interestingly, three other immigrant ships berthed in Sydney on that very same day 170 years ago – Julindur, Mary Shepherd and Beulah. The latter was carrying 180 bounty immigrants from the Rheingau (Rhine district) in the heart of German wine country. The 47 families on board were the first group to arrive through a new bounty scheme initiated by German merchant Karl Ludwig Wilhelm (William) Kirchner.

Johannisberger vineyard in the Rheingau, 1850–1880. Courtesy Library of Congress LOT 7738.

In 1847 William Kirchner, the Hamburg Consul in Sydney, was appointed as an immigration agent for the colony of New South Wales. To address the problem of labour shortages in the colony, he proposed a bounty scheme that would provide for subsidised German migration. This followed an earlier government decision to approve the entry of European workers for specialised fields in which skilled British labour was not available – primarily the cultivation of vines, olives and silk.

In 1838, James Macarthur and William Macarthur (sons of wool pioneers John Macarthur and Elizabeth Macarthur) recruited six German vinedressers and vintners from the Hattenheim area to tend the grapes at their Camden Park estate. Among them was Johannes Stein (1807–1884) and his wife Ludovica Philippina Elisabeth (Henriet) Fritzdorf, who sailed on the barque Kinnear.

Immigrants were contracted to work for two years... once they had completed their contracts, many went on to purchase land for viticulture around the Mudgee and Hunter regions of New South Wales.

Under Kirchner’s scheme, immigrants were contracted to work for two years for the colonist who paid their bounty. Once they had completed their contracts, many went on to purchase land for viticulture around the Mudgee and Hunter regions of New South Wales. Today some of their names are recorded on the museum’s Welcome Wall, honouring the pioneering role of German immigrants in the development of the Australian wine industry.

The Stein family on the Welcome Wall. Image: ANMM.

Vinedresser Heinrich (Joseph) Stein (1813–1854) and his family arrived in Sydney from London on the three-masted bounty ship Beulah in April 1849. Joseph was the brother of Johannes Stein, who worked on the Macarthur estate in the late 1830s. Joseph, his wife Eva (1817–1900) and their three children, Bernard (nine), Anna (six) and Andreas (two), came from Erbach. They embarked on Beulah on 14 December 1848, having sailed down the Rhine River to Antwerp, and then across the North Sea to London. 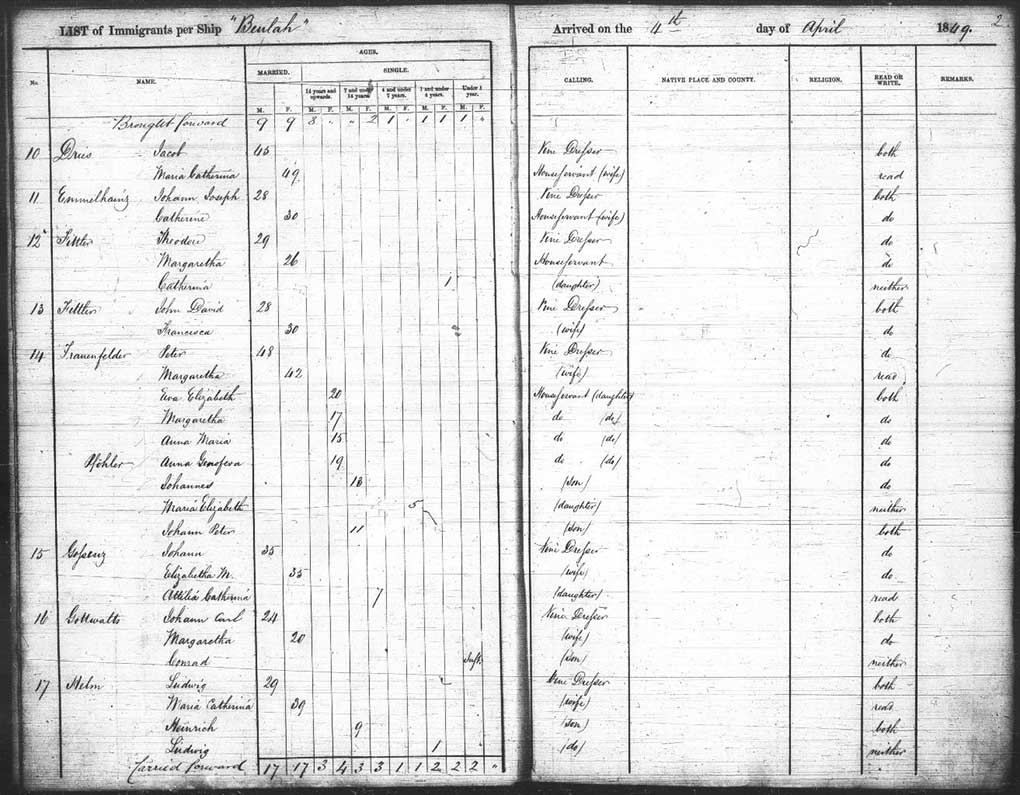 Also on board Beulah were Johann Joseph Emmelhainz (1821–1894) and Katharina Josepha Emmelhainz (1819–1908) from the town of Eltville. They would work as vinedressers in the Hunter Valley region in New South Wales.

A total of 600 German bounty immigrants arrived in Sydney in 1849, including 160 people on Parland on 5 July. Among them were Johann Joseph Host (1818–1881), a watchmaker from Erbach, his wife Elisabeth and their eight children. Johann operated an 82-acre vineyard in Kiama and later became the licensee of the Kent Hotel in Sydney. Tragically he drowned in 1881 and was buried in the Old Catholic Cemetery in Nowra.

A further 30 bounty immigrants arrived in Sydney on Harmony on 23 September 1849, including Franz Hauser, a vinedresser and violinist from Württemberg. Over the next few years, some 2,000 German assisted immigrants settled in the Australian colonies. They were no doubt inspired by William Kirchner’s book, Australien und seine Vortheile für Auswanderer (Australia and its Advantages for Emigrants), which contained letters from Beulah bounty immigrants extolling the virtues of Australia as a land of milk and honey.