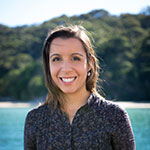 Dr Catarina Vila-Pouca has always had a passion for sharks. She thinks sharks are fascinating creatures, and that the fear they instigate comes from knowing very little about their behaviour and intelligence. Her main research interests are fish behavioural ecology and its links to cognition. During her PhD at Macquarie University, she investigated how Port Jackson sharks learn.

We chatted to her about misconceptions and mysteries of sharks, ahead of her appearance this Thursday for our latest Ocean Talks event.

What do we know about sharks? What don't we know..?

Sharks are elusive creatures that live in a world very different from ours, so it's quite hard to observe and study many aspects of their biology and behaviour. In the last few years we have seen huge advances in technology that now allow us to tag and track these sharks, have underwater cameras, remotely operated vehicles, a variety of devices that give us a window into the lives of these amazing animals. But there is still a lot to discover.

One of the things we know less about sharks has to do with their behaviour – not so much where they go and what they do anymore, but why. What factors drive them to behave the way they do? How do they learn with their life experiences and what aspects of their environment are important for the decisions they take?

I wish people realised that sharks are...

Very smart and unique animals more similar to us than we realise, with personal preferences and choices.

One of the things we know less about sharks has to do with their behaviour  – not so much where they go and what they do anymore, but why.

How did you come to study sharks?

I have had a passion for sharks for as long as I can remember, and I'm not quite sure how it started.

I always thought the fear they instigate in most people comes from knowing very little about them, and figured that by studying sharks I could spend a lot of time in the water with them and would also be a good way of changing public perception of these amazing animals.

My favourite shark is the blue shark. It was the first species of shark that I ever worked with. Blue sharks are so graceful and stunning, and also very cheeky and curious!

I’m teaching Port Jackson #sharks 🦈 to swim through one of two doors to get a 🦑 treat. This little guy already knows what’s up 😀 (correct door is closed in the video) #smartsharks #behaviour @FishLab_MQ @SouthernSharkEG @MQSciEng @SydneyMarine pic.twitter.com/Eex0eBrgT6

What is the greatest threat to sharks today?

Overfishing is the greatest threat to sharks today, combined with a range of other factors such as habitat degradation and pollution.

Sharks are targeted by commercial fisheries and often caught as by-catch in numbers too large to allow the populations to recover. Sharks have a slow reproduction: females only have a few pups each years and it takes the juveniles several years before they reach sexual maturity and start having babies of their own, which means they are not fast enough to replace the individuals that are being fished.

That they have two senses that we humans do not have, much like 'superpowers'.

They can detect electromagnetic fields, like those produced by batteries and electronic devices but also by the beating of our heart! That's how some sharks find their prey when its camouflaged or buried in the sand.

Sharks also have a lateral line system that allows them to sense movements, vibrations, and pressure gradients in the water that surrounds them. This gives them spatial awareness and allows them to find prey and chase them more effectively. For smaller sharks and rays, this also helps them to detect large predators that are on the lookout to catch them.

Join Catarina, Charlie Huveneers and Culum Brown in conversation this Thursday for Ocean Talks, for an evening of shark facts, science and mysteries.

View all posts by Kate Pentecost→
Posted in: Sharks , Arts and Culture
↑