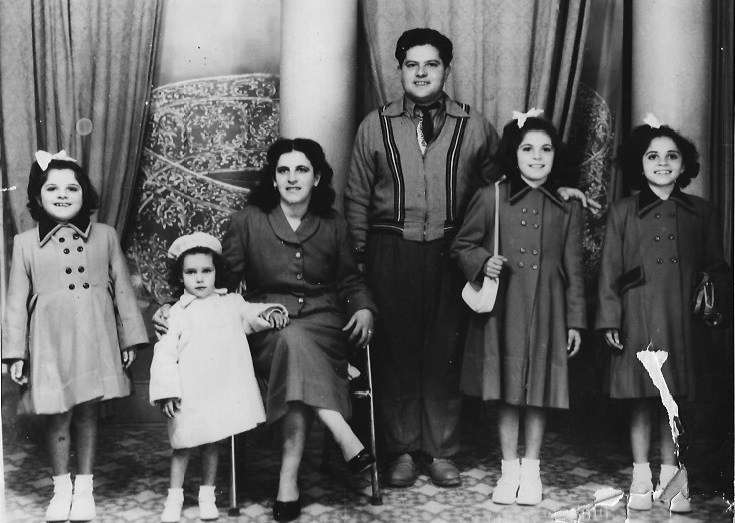 The Camenzuli family in Paola, Malta, a few days before their departure for Australia on Skaubryn, 1958. From left: Lucy, Lina, Georgina, Zaren, Mary and Joyce. Reproduced courtesy Camenzuli family.

It’s International Museum Day, an annual event that raises awareness about the role of museums in cultural exchange and the development of mutual understanding. This year’s theme of ‘hyperconnected museums’ focuses on how museums can make their collections accessible and connect with local communities. It’s a theme that is pertinent to our Remembering Skaubryn: 60 years on exhibition, which is drawn from an important collection of photographs documenting the fire and rescue on the Norwegian migrant liner Skaubryn in 1958. Skaubryn was carrying 1,080 passengers, mostly German and Maltese migrants, and was the only vessel lost at sea during the era of post-war migration to Australia.

We have been amazed by the public response to Remembering Skaubryn, with offers of material for our collection, oral history interviews, and visits from survivors, their families and descendants, as well as local community groups such as the Australian-German Welfare Society. It has been wonderful to hear from visitors who have found a personal connection to the exhibition, reminding us that immigration is lived history but also living history, where the impacts of life-changing migrant voyages resonate right down through the generations. 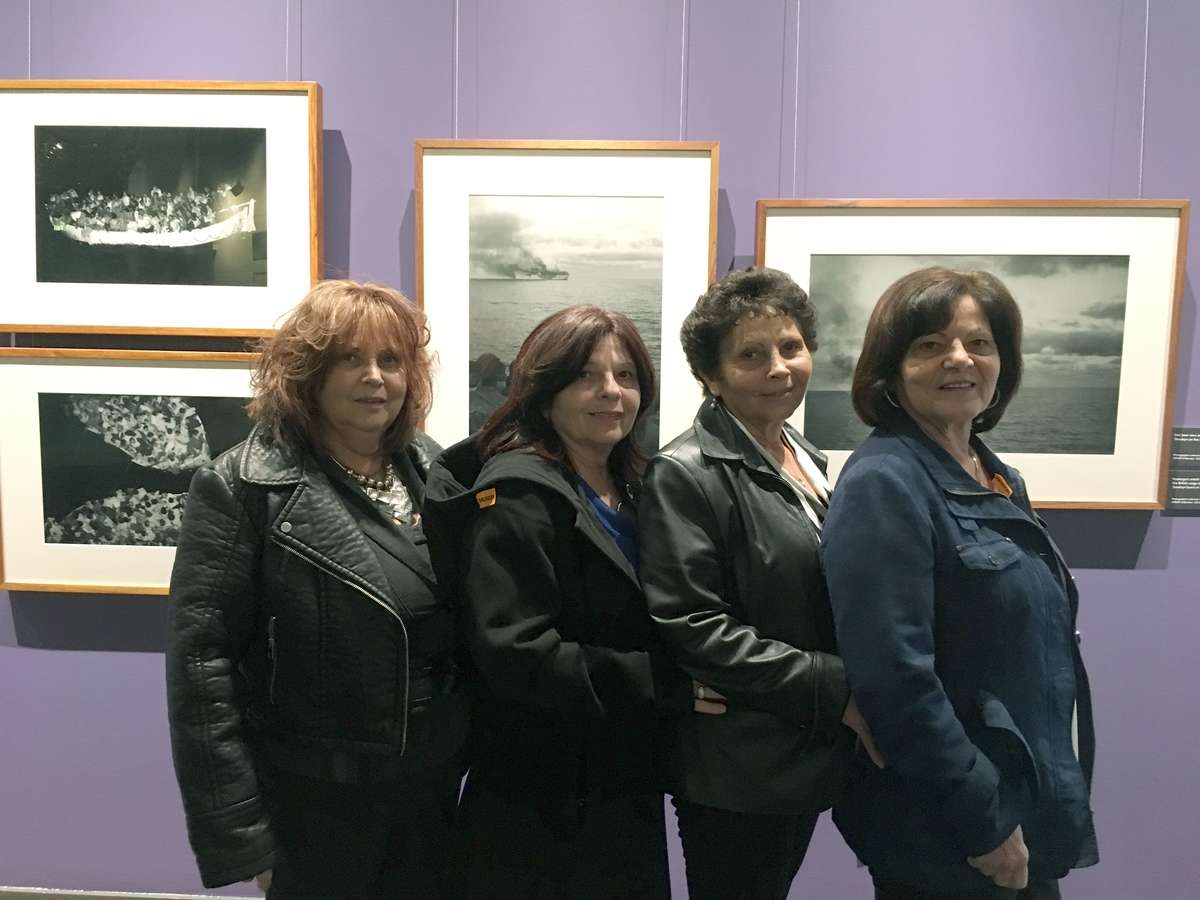 The Camenzuli sisters at the museum, (from left) Lina, Lucy, Joyce and Mary, 2018. Photograph Kim Tao/ANMM.

The exhibition has also given us a chance to reconnect with the Camenzuli sisters, who emigrated from Malta with their parents, Zaren and Georgina, in 1958. Zaren, Georgina and their four daughters, Mary (11), Joyce (10), Lucy (9) and Lina (3), were without lifejackets when they evacuated the burning Skaubryn in the Indian Ocean on the evening of 31 March 1958. The lifeboat they boarded did not have a motor, and an elderly German passenger in their boat died after suffering a heart attack. Zaren and Georgina had to watch on helplessly as their four girls were hauled up in baskets to the rescue ship, City of Sydney.

The Camenzuli sisters recently made an emotional visit to the museum to mark the 60th anniversary of their family’s arrival in Australia – a family that now numbers almost 100. They provided some poignant photographs relating to their departure from Malta. One is a studio portrait of the Camenzulis in the town of Paolo, just days before their embarkation on 22 March 1958. The four girls are dressed in smart new double-breasted coats that were handmade by their mother, a talented seamstress. Sadly these, along with all their belongings, were lost in the Skaubryn disaster. Another photograph, taken by a cousin, shows the family preparing to board the motor launch that will convey them to the ill-fated Skaubryn. The youngest daughter, Lina, peeks out from beneath a railing at the wharf in Valletta. 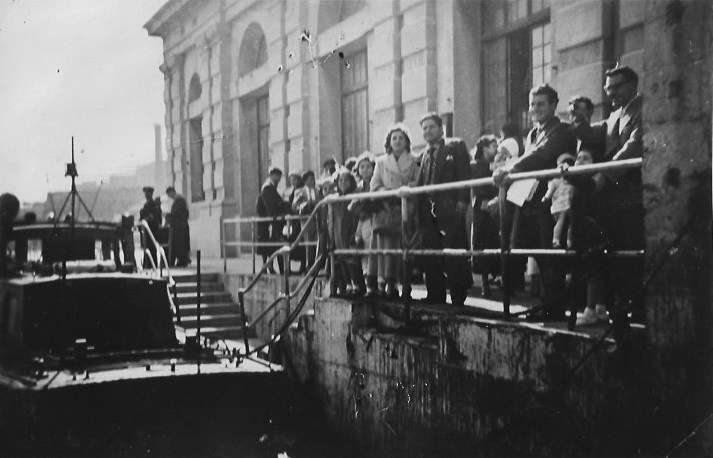 The Camenzuli sisters also presented an English translation of a għana tal-fatt (traditional fact-based folk song) titled ‘Saga of the Skaubryn migrants’, written by their mother and inspired by the family’s ordeal. In 1996 Georgina performed the moving ballad in Maltese during a Skaubryn reunion at the museum, with her husband Zaren accompanying her on the guitar. Sadly Georgina and Zaren Camenzuli have passed on, but their four daughters have ensured that the family’s story will live on by sharing the għana here in memory of their parents. It’s a powerful reflection of history and memory, story and song. 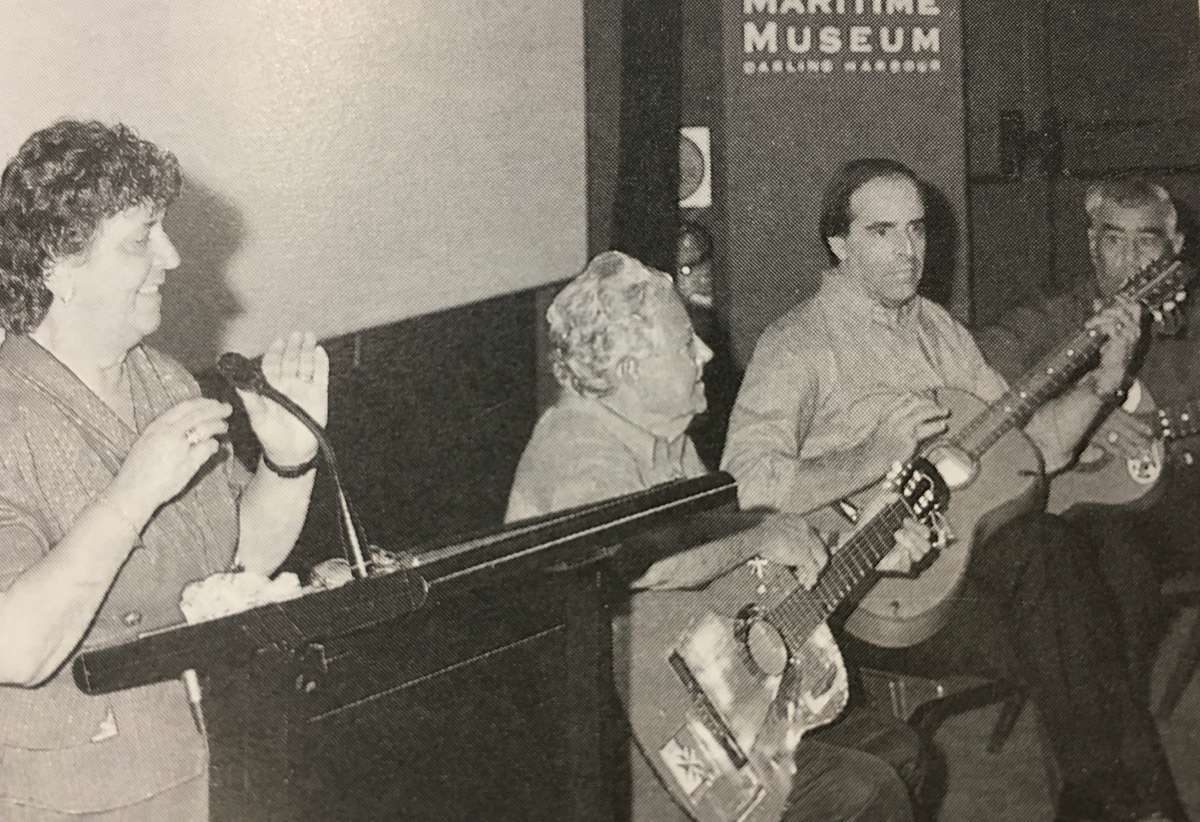 Georgina Camenzuli performing her għana at the museum, accompanied on guitar by her husband Zaren and two friends, 1996. Reproduced courtesy Camenzuli family.

I want to tell you of our adventure
And I hope that I don’t err
Whatever I say to you is real
And it happened to me, and to my husband and to our children as well.

My husband had a good job in Malta
And brought home a decent wage
He loved his work and was quite happy
Working as a chauffeur at Hal Far.

Our house was nice and comfortable
Full of furniture and hung with curtains
But I was always asking him
To take me to my parents.

And at last he said, ‘We’ll go
And make your wish come true
To make you completely happy
I shall take you to your mother and father’.

We went to the emigration office
To begin our preparations
And then did whatever was necessary
So we could emigrate to Australia.

My husband had to leave working early
About a month before we sailed
He had quite a lot to do
Selling the contents of the household.

When everything had been disposed of
We bought boxes and some luggage
And then we continued to make ready
Until our preparations were completed.

Well, the day finally arrived
For us to leave as scheduled
It was a day in March
The year, 1958.

The ship was called the Skaubryn
Very smart looking and rather large
The passengers numbered nine hundred
And consisted of adults as well as young.

We had been at sea a week
And then notice was brought to our attention
Everyone had to prepare
Because the ship had suffered a malfunction.

When we heard this alarming piece of news
We were inside our cabin
We were ready to go to bed
Because everyone was feeling tired.

I went and opened the door to inquire further
And saw people running to get upstairs
They were all crying and lamenting
That ‘the ship had caught on fire’.

When we reached the upper deck
After nearly suffocating
We discovered that in our haste we had left our lifejackets
Behind and had nothing to save ourselves with.

Then my husband said to me
‘Look after the children and keep them near you
So I can go below
And see if I can get them’.

When he tried below
He kept running into walls
He could see absolutely nothing
Everywhere was filled with smoke.

He returned and joined his family
Looking frantically all about
He said to me, ‘Let’s put our trust in God
And do as everyone else does’.

The lifeboats were then lowered
So people could be saved
We got into the first one
So that we could escape the ship.

While we sat in the lifeboat
The ship burned more fiercely
But we could not move the boat away
Because it had no oars or motor.

We remained in the boat for a long time
Praying and full of hope
Looking all about us
So that perhaps we could see a ship.

Some three hours later
We saw a light coming slowly towards us
‘It is a tanker’, people shouted
And it would not approach too closely.

The other boats were all seaworthy
And the minute they saw the tanker
They quickly made their way towards it
And everyone started to feel better.

Our boat remained unmoving
And we started to see sharks
We started to signal the other boats
To come and give us a tow.

Our boat was loaded to capacity
Amongst us being two nuns
There was also a man with us
Who suffered a heart attack and died.

The nuns thought that we would die by drowning
And looked after us with much affection
And to prepare us for the next world
They gave final ‘absolution’.

While we were drifting helplessly
Someone must have finally seen us
They brought a large rope
And pulled us along with it.

As we approached the tanker
We saw our friends on board
The children were hoisted up in a basket
And a rope ladder served the rest of us.

On so board the tanker we clambered
And found people lying all over the deck
Some of them talking
And some of them asleep.

We spent 19 hours on the tanker
Tired and suffering greatly from the heat
And then the good news reached us
That the Roma was coming for us.

All of us transferred to the Roma
Which arrived with all due haste
But it was already carrying passengers
And you won’t believe how crowded it was.

I thank God for our survival
And our fears came to an end
But the ship was going the other way
And it carried us back for three whole days.

We spent three days on board the Roma
And were treated with great respect
Then they put us ashore in Aden
Where everyone was housed inside a hospital.

In the time we were at Aden
Occurred the feast of Good Friday
They came for us with motor cars
And took us for a drive around their city.

When those people of Aden
Heard of our predicament
They tried to help us
And they brought us shoes and also clothing.

I shall always praise those people
Because they were good, kind-hearted folk
They felt pity on us
When they saw us in bare feet.

A short while after we arrived in Aden
We were told to look sharp
And to quickly make everything ready
Because a ‘tourist’ ship was coming for us.

This ship was called Orsova
And I want to make this clear
It was one of the very best
And on which sailed only the richest people.

So once we boarded ship
Carrying just one suitcase
We spent another three weeks on it
And by God’s grace finally made it to Australia.

Now in Australia
And for this we have no regret
We thank God with all our heart
That we’ve arrived here in safety.

And so we dropped anchor in Sydney
And have always been very careful
Now we have forgotten everything
And are very much contented.

My dear beloved listeners
We had the greatest battle
I wanted to show you how much we suffered
Until we finally reached Australia.

I hope you’ve taken pleasure
Whoever has listened to this story
I want to thank the guitarists
And all those who have also helped me.

I have sung this ‘Għana tal-fatt’
For the general audience to hear it
My lead guitarist being Joe ‘Il-Koka’
Accompanied by Censu and ‘Is-Simenza’.

Remembering Skaubryn – 60 years on is on show until 12 September 2018. You can see more images from the Skaubryn sinking and rescue on Flickr.

View all posts by Kim Tao→
Posted in: Events , Exhibitions , From the collection , Migration
↑