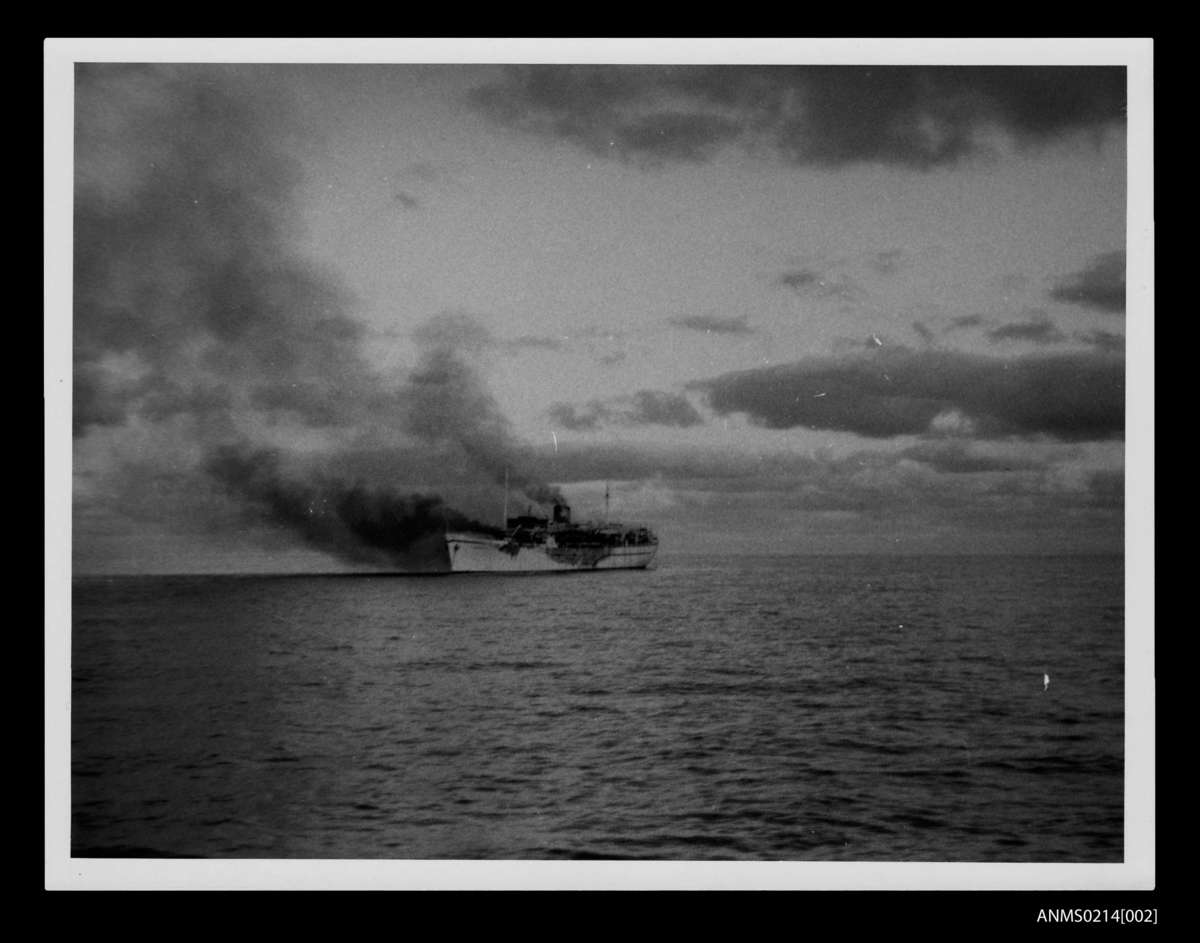 Photography has always played a critical role in documenting the movement of people across borders. The photographs linked to the vast archive of Certificates of Exemption from the Dictation Test, for instance, put a face to those impacted by the Immigration Restriction Act (White Australia policy) for the first half of the 20th century. In more recent times, the 2015 photograph of the body of three-year-old Alan Kurdi washed up on a Turkish beach brought the horrors of the Syrian refugee crisis to a global audience. Photographs, as material (and now increasingly digital) objects, also cross borders to bear witness to the lived experiences of migration and diaspora.

The museum holds a rich archive of photographs relating to migration (many of which are in the process of being digitised), ranging from informal family snapshots to official portraits promoting government mass migration schemes after World War II. One of our most significant collections documents the fire and rescue on the Norwegian liner Skaubryn in the Indian Ocean in 1958. A selection of these photographs is now displayed in our Tasman Light Gallery to mark the 60th anniversary of the Skaubryn disaster. 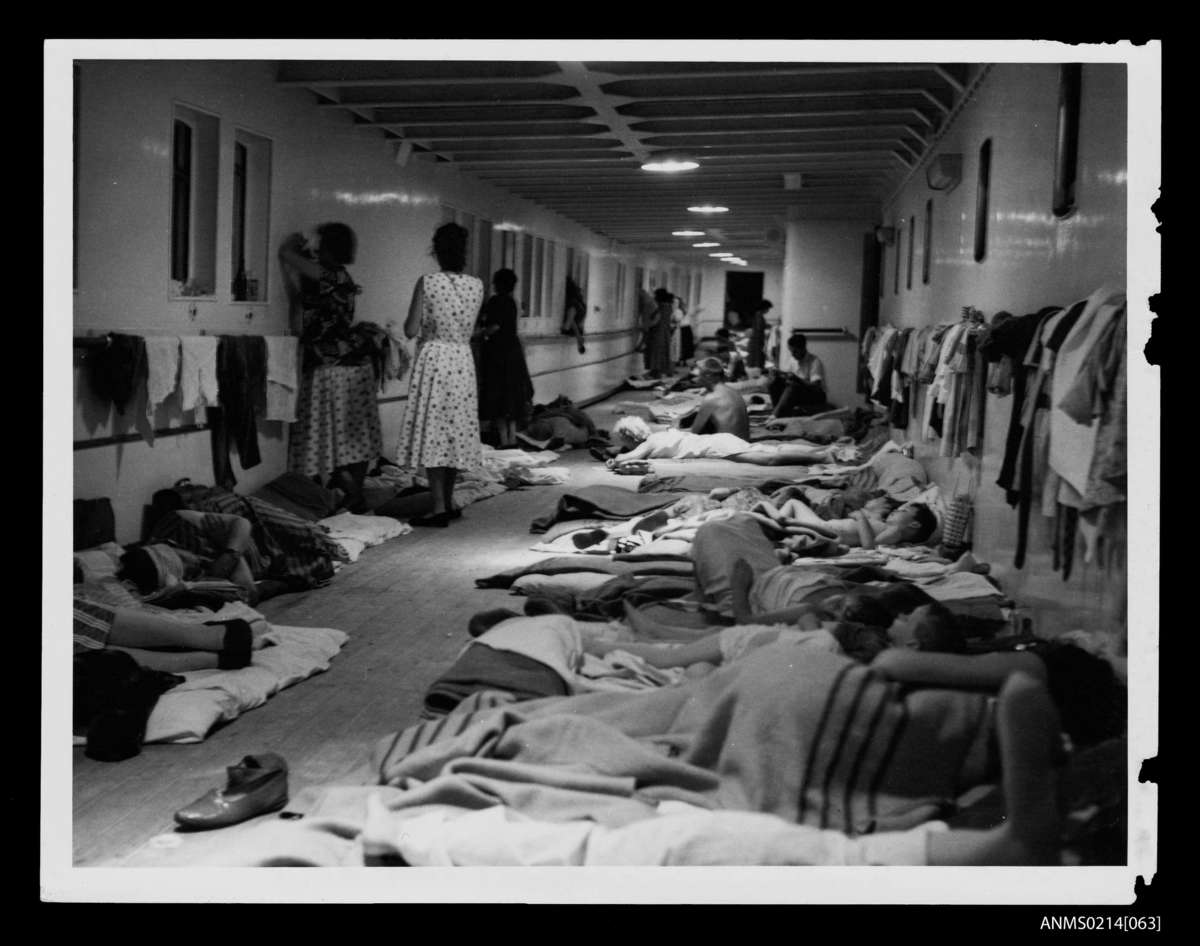 The Skaugen liner Skaubryn was the only vessel lost at sea during the era of post-war migration to Australia. It was carrying 1,080 passengers and 208 crew when a fire broke out in the engine room on the evening of 31 March 1958. The vessel was approximately 800 miles from the British port city of Aden (now part of Yemen) and 360 miles from the African coast. Among the passengers were 736 German migrants, 168 Maltese migrants and 176 private passengers.

Within hours the passengers and crew were safely evacuated in the ship’s lifeboats, although one man, Mr Erich Walter Holz, died from a heart attack during the rescue operation. The fire destroyed the midships and forward part of Skaubryn and the vessel sank on 6 April 1958 while under tow to Aden. 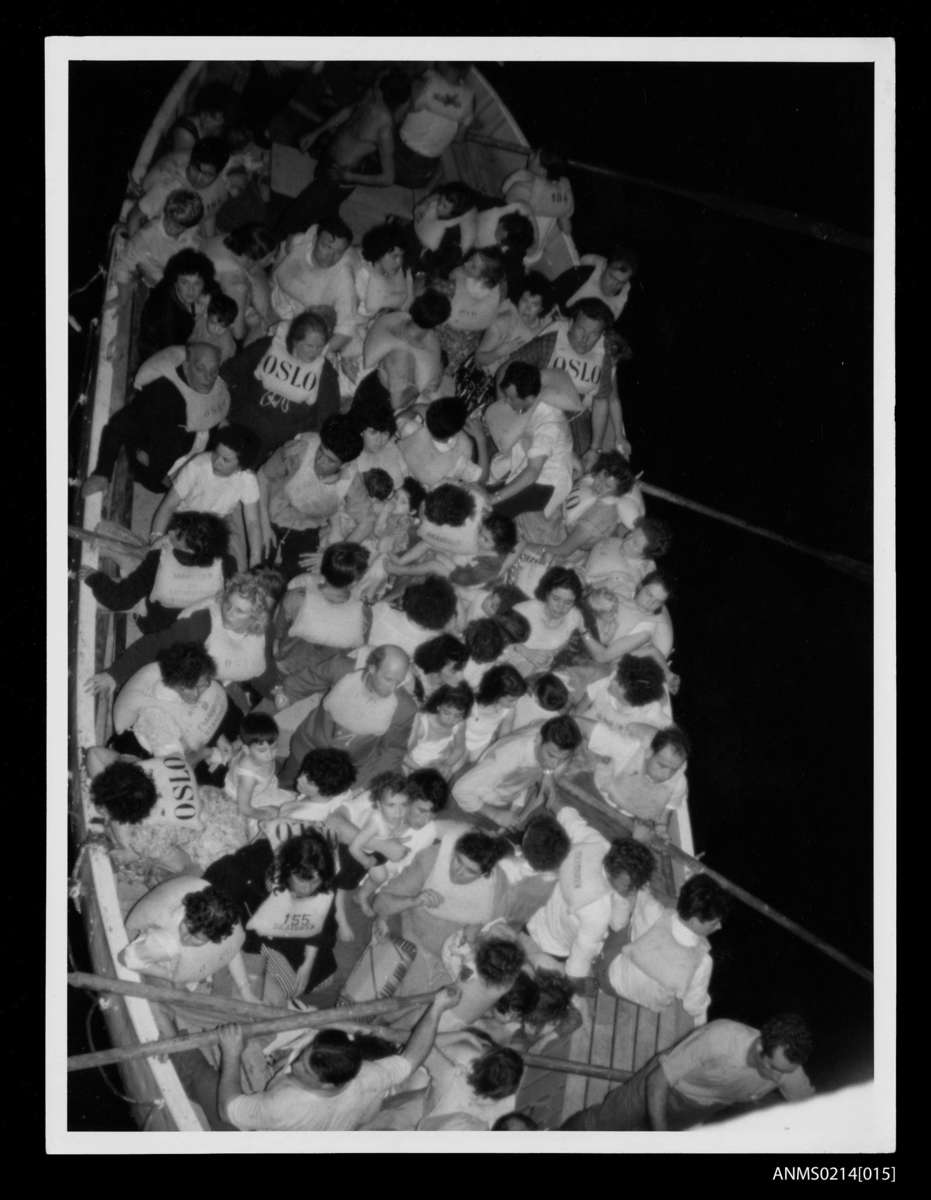 The Intergovernmental Committee for European Migration

The museum’s Skaubryn photographs were collected by Australian journalist Keith Woodward, who was a Public Information Officer for the Intergovernmental Committee for European Migration (ICEM, now International Organisation for Migration or IOM). Woodward was based in Geneva, Switzerland, and was one of three ICEM officials who flew to Aden to help coordinate the rescue efforts. ICEM was the successor to the International Refugee Organisation (IRO), which was established to assist the millions of Europeans displaced by World War II and arrange for their resettlement in countries such as Australia, Canada and New Zealand. Skaubryn transported some 20,000 European migrants during its seven-year career and also had the distinction of carrying ICEM’s 250,000th post-war migrant in 1954.

The photographs document, in incredible detail, the fire engulfing Skaubryn and the ensuing dramatic rescue at sea. Many were taken from the vantage of the British cargo ship City of Sydney, which picked up the survivors in the Indian Ocean. They were later transferred to the Flotta Lauro liner Roma and returned to Aden. 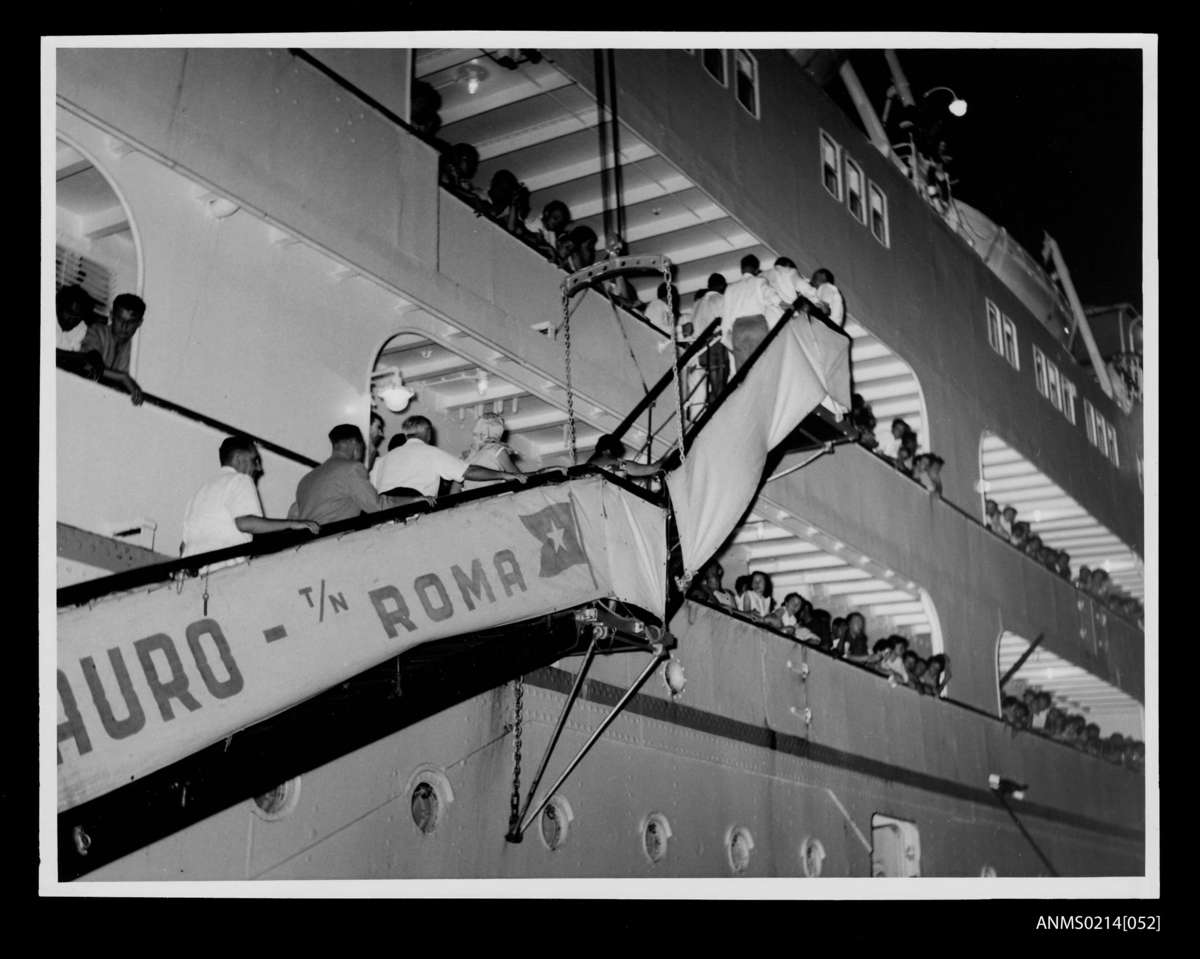 Photographs capture the lifejacket-clad survivors crowded into lifeboats, climbing the gangway of Roma and their temporary accommodations on the Italian liner. Others show the new Queen Elizabeth Hospital in Aden, which opened early to house the survivors, and the private passengers, pregnant women and their families being airlifted to Australia. The remaining German and Maltese migrants resumed their journeys to Australia on the liners Orsova and Johan van Oldenbarnevelt. 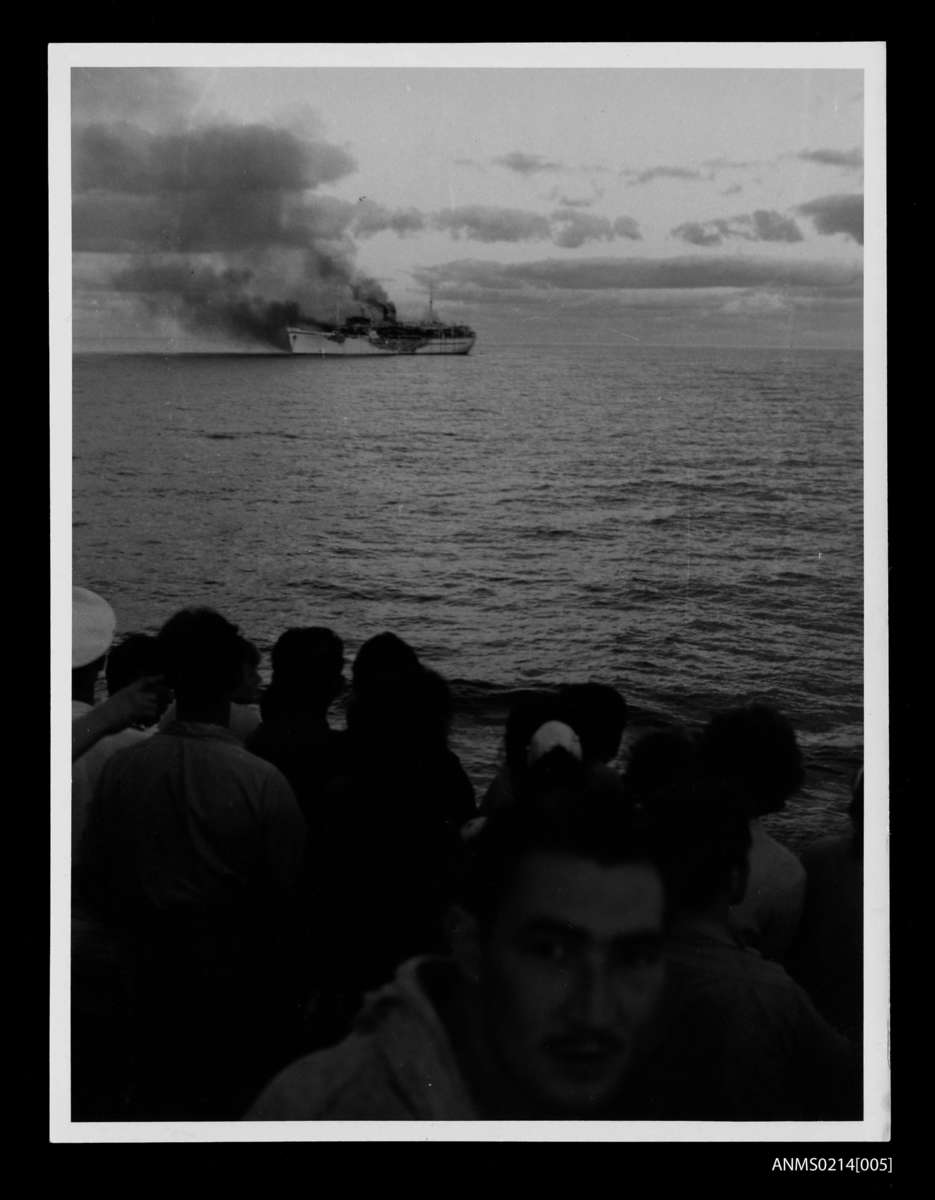 One of the most powerful photographs shows passengers watching on from the deck of City of Sydney, as the ship that should have carried them to Australia burns in the middle of the ocean. One man turns to face the camera, staring directly into the photographer’s lens. Who is he? The museum is keen to hear from anyone who can identify this man or any of the other people pictured, to discover how their lives turned out after Skaubryn’s final passage.

View all posts by Kim Tao→
Posted in: Exhibitions , From the collection , Migration
↑