The box that changed the world

The sailing of the Ideal-X in 1956 marked the beginning of a shipping revolution at once profound and largely invisible1.

TAKE A MOMENT to look around you. Are you sitting at home, at work, on a train, in a cafe? What’s in the room, in your bag, on your feet? Chances are, many of the things you encounter have travelled by shipping container. If you’re reading this article on an iPad, it not only arrived in Australia on a container ship, its various parts traversed the globe during its complex and highly integrated supply and manufacturing process. Its display and camera were made in Japan, its touch-screen sensors in Taiwan, its processor in the United States, its gyroscope in France and Italy.2 And this does not account for the origins of its raw materials or their assembly, packaging and distribution points.

A product like this only makes sense in a world fundamentally transformed by the shipping container. The simple steel box may seem an unlikely candidate for a global revolution. It is, after all, just a box. But the impact of the container is far less about what it is than what it has made possible: intermodal transportation networks bridging ocean, road and rail; streamlined port operations that keep ever-larger ships on the move; global supply chains that give manufacturers the flexibility to pick and choose production centres; a sophisticated cold chain delivering fresh and frozen produce all year round; and, ultimately, the economies of scale that ensure shipping is, per unit, the cheapest mode of transport available. This is why, despite appearances to the contrary, seaborne trade still accounts for 90 per cent of all global trade by volume. In Australia that figure is closer to 99 per cent. 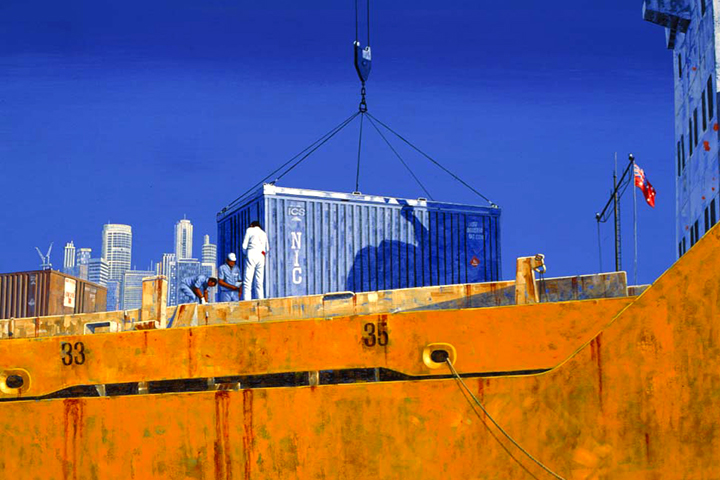 The container’s economies of scale are perhaps best illustrated by the ships that carry them. The largest container ships today are 400 metres long – considerably longer than the Eiffel Tower is high – and capable of carrying more than 18,000 TEU, or twenty-foot equivalent units. This is the standard but imprecise measurement for ISO shipping containers, which come in 10-foot (3-metre), 20-foot (6-metre), 40-foot (12-metre) and 45-foot (13.7-metre) varieties and include extra-volume high-cubes, insulated ‘reefers’ with built-in temperature controls for refrigerated cargo, open-topped and flat containers for irregular and oversized goods, and tank containers for liquids and gases. Among the biggest ships today are the ‘Triple E’ class ships, named after shipping giant Mærsk’s latest generation of container ships, the first to take the leap to 18,000-TEU capacity in 2013. 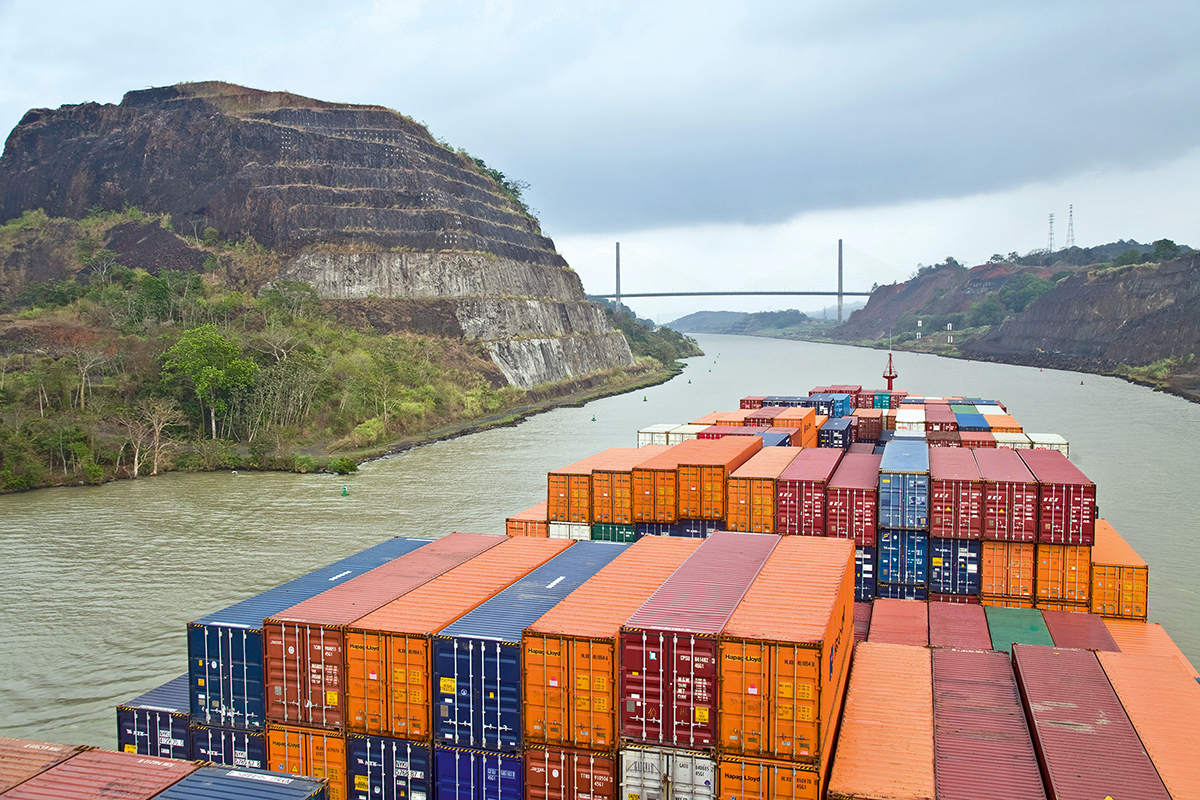 The box was born into an industry that had changed little since the adoption of the steam engine and steel hull during the second half of the 19th century. Despite some mechanisation, many of its practices dated back further still, particularly the loading of ‘break bulk’ cargo – the goods of varying sizes and weights that arrived at the dock in barrels, sacks, baskets, crates and pallets to be loaded onto slings and hauled aboard. From the deck the cargo was sent down to gangs in the ship’s hold, whose job it was to unload and manoeuvre each item into irregular spaces with handcart, hook and brute force. This was a labour-intensive, backbreaking business. It was also time consuming. A single ship could be held in port for a week or more to unload and load again, all the time making no money for the ship owner. 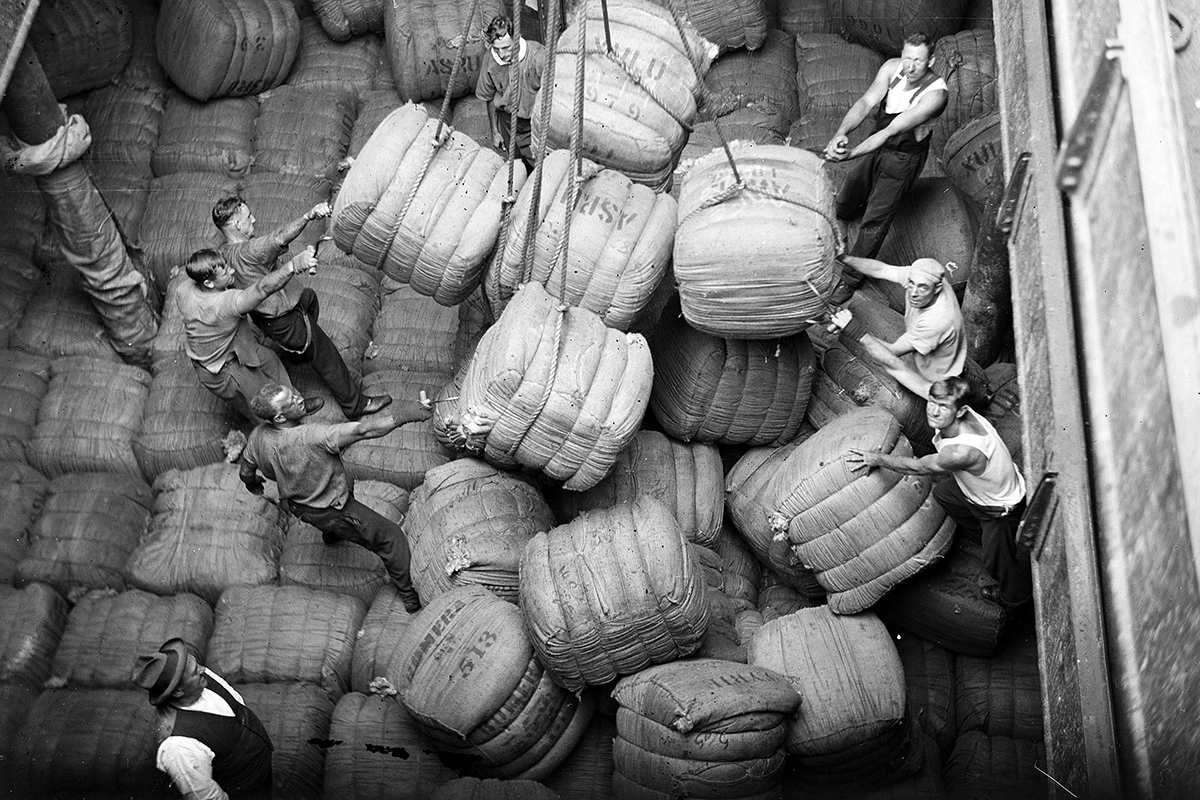 In the post-World War II United States, the situation was hindered further by a dependence on small and inefficient Liberty ships, the cheaply constructed cargo vessels built as an emergency provision by the United States Maritime Commission between 1941 and 1945 and sold to merchant lines at war’s end. Tight government regulation sheltered the shipping industry from competition, and there was little incentive to push for change when vast sums would be needed to modernise ships and docks that would still rely on manual labour. 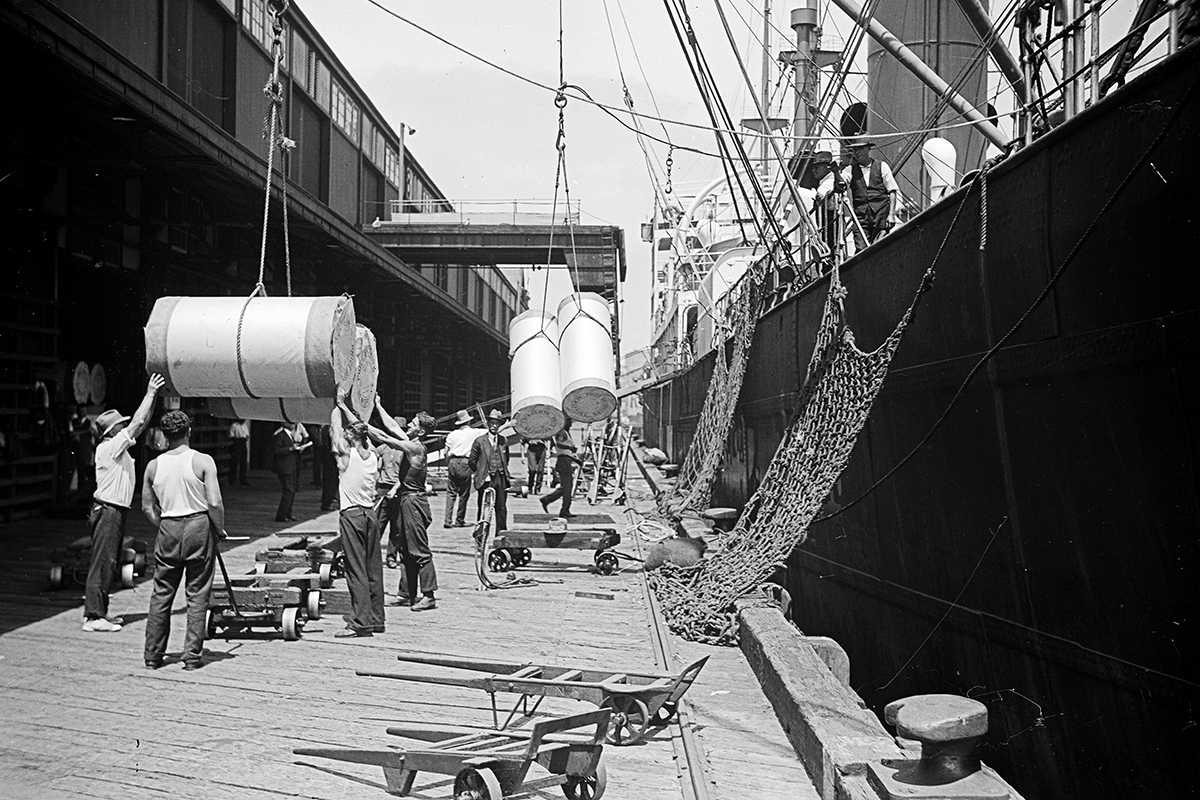 As Marc Levinson, author of The Box, shows, when change did come, it came not from the staid shipping industry, but from an entrepreneurial trucker with a keen talent for squeezing every last drop of profitability from his fleet.3 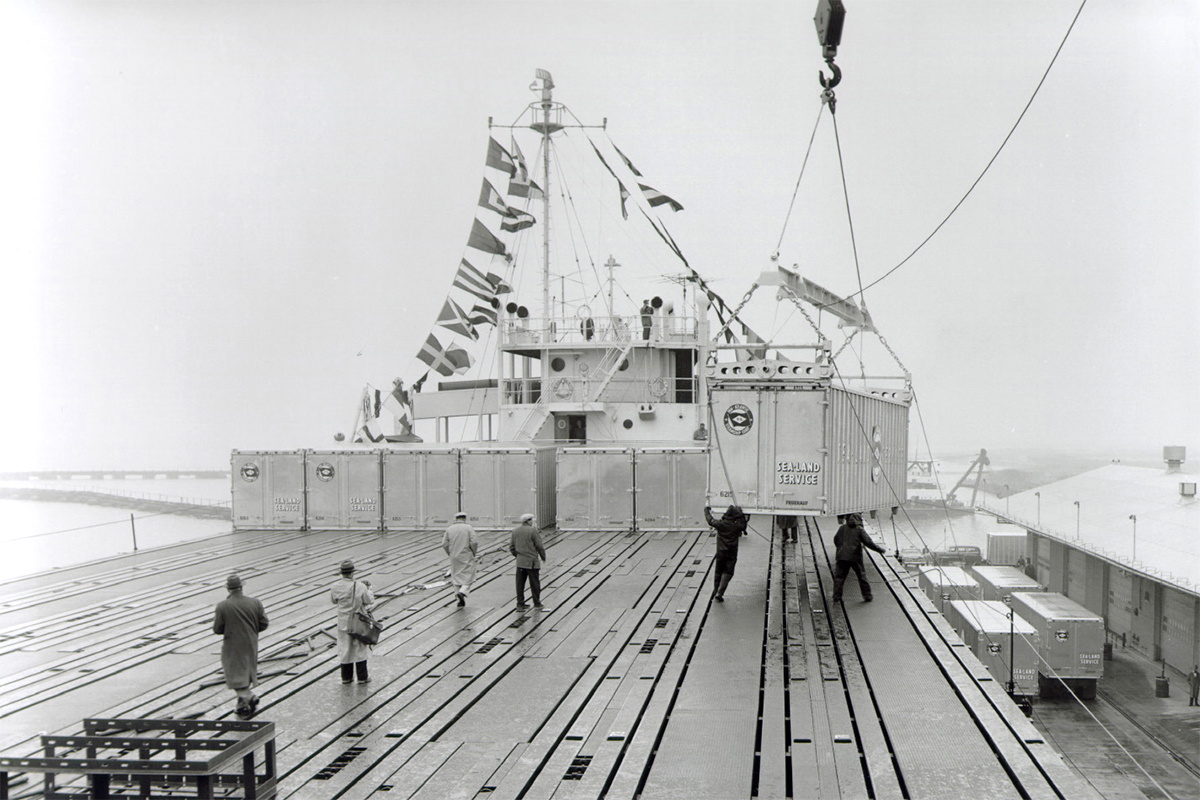 The first sailing of the world’s first container ship, the Ideal-X, on 26 April 1956. Courtesy Port Authority of New York and New Jersey.

In a series of convoluted financial transactions, self-made trucking magnate Malcom McLean purchased the ailing Pan-Pacific Steamship Corporation, followed shortly by its parent company, Waterman Steamship, both in 1955. The idea was to put truck trailers on ships along United States east coast routes to circumvent the interstate trucking industry’s own regulatory restrictions and to open up new territories. McLean soon realised that transporting truck bodies only, without the accompanying trailer chassis, would save considerable space. This was the spark of the container ship idea and in keeping with his propensity for action over analysis, within a year McLean purchased two World War II tankers and converted them to carry his new custom-built 33-foot (10-metre) containers. 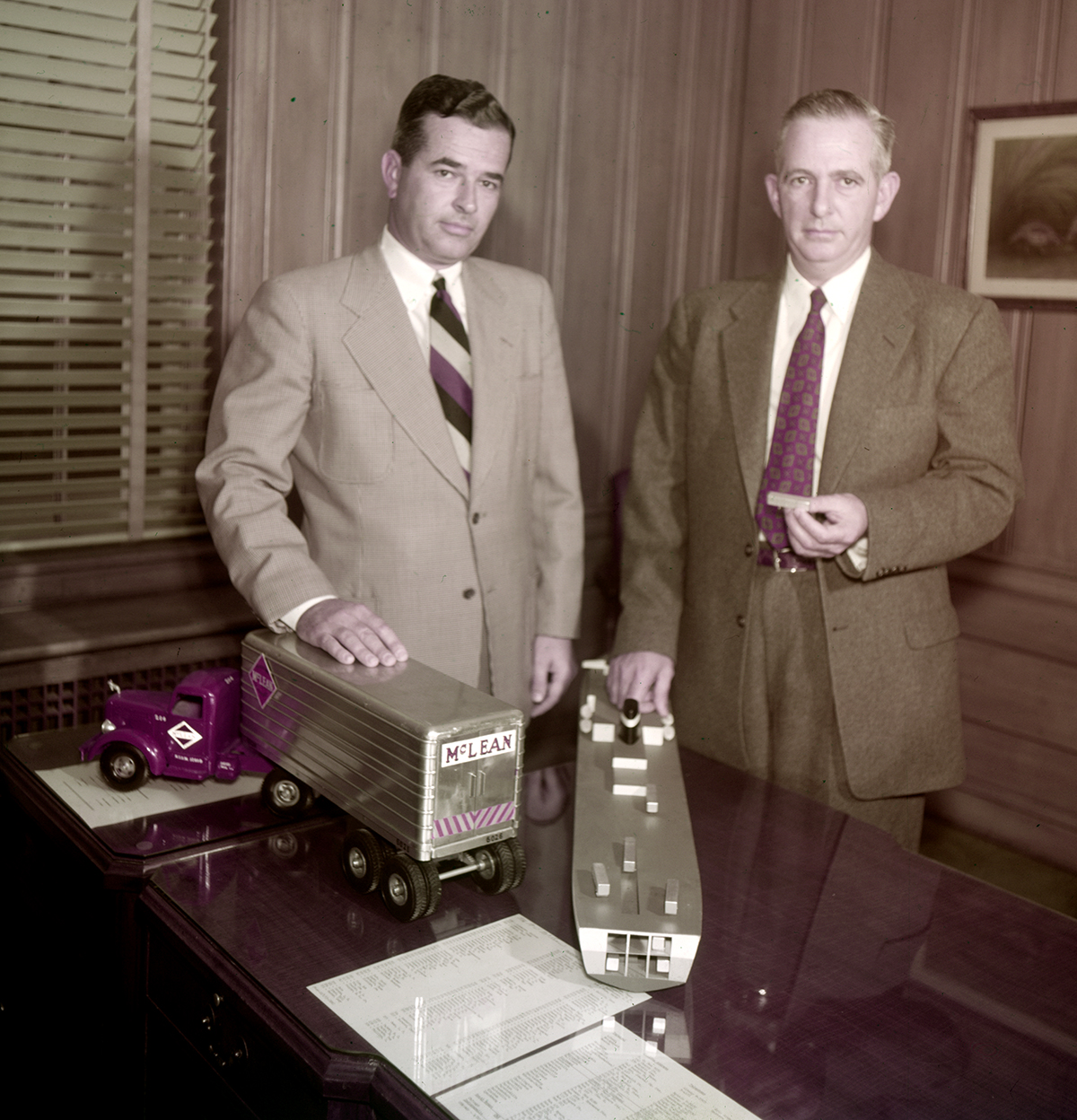 On 26 April 1956 the Ideal-X set sail from Newark, New Jersey, to Houston, Texas, with 58 containers on board. Though wooden and metal cargo boxes, ‘containers’ of one form or another, had been in use for several decades, this was the first conclusive demonstration of the economic viability of containerisation. Not only did McLean’s boxes withstand the 4,830-kilometre journey lashed to the deck of the converted tanker, cargo handling costs were reduced from US$5.83 per ton to just 16 cents.4 Such massive savings had eluded prior containerisation efforts, where unwieldy boxes had been loaded onto traditional cargo ships, vying for space with mixed cargo. There was also the matter of port infrastructure. McLean had invested in heavy-duty shore-side cranes with custom-made spreaders, slashing the transfer time from ship to waiting truck.

While not the ‘inventor’ of the shipping container, Malcom McLean was certainly its most ardent advocate during the early years of containerisation. Despite the success of his experiment, an industry-wide shift was slowed by the huge capital investment required, both in terms of fleet conversion and on the docks. Many onlookers hedged their bets, waiting, in particular, for a verdict on standardisation. When it came it prompted an accelerated uptake of the new technologies. The world container ship fleet, estimated at just 16,000 TEU in 1965, jumped to 140,500 by 1970 and increased more than tenfold by 1990 to 1,765,868.5

Ships themselves also grew in capacity over this period. The 1980s saw the emergence of 3,000–4,000 TEU ‘Panamax’ ships. The name refers to the maximum size that could fit within the locks of the Panama Canal. An expansion of the canal, costing at least US$5.4 billion and completed in June this year, accommodates ships up to 12,500 TEU, the ‘New Panamax’ class, but not the Triple E. 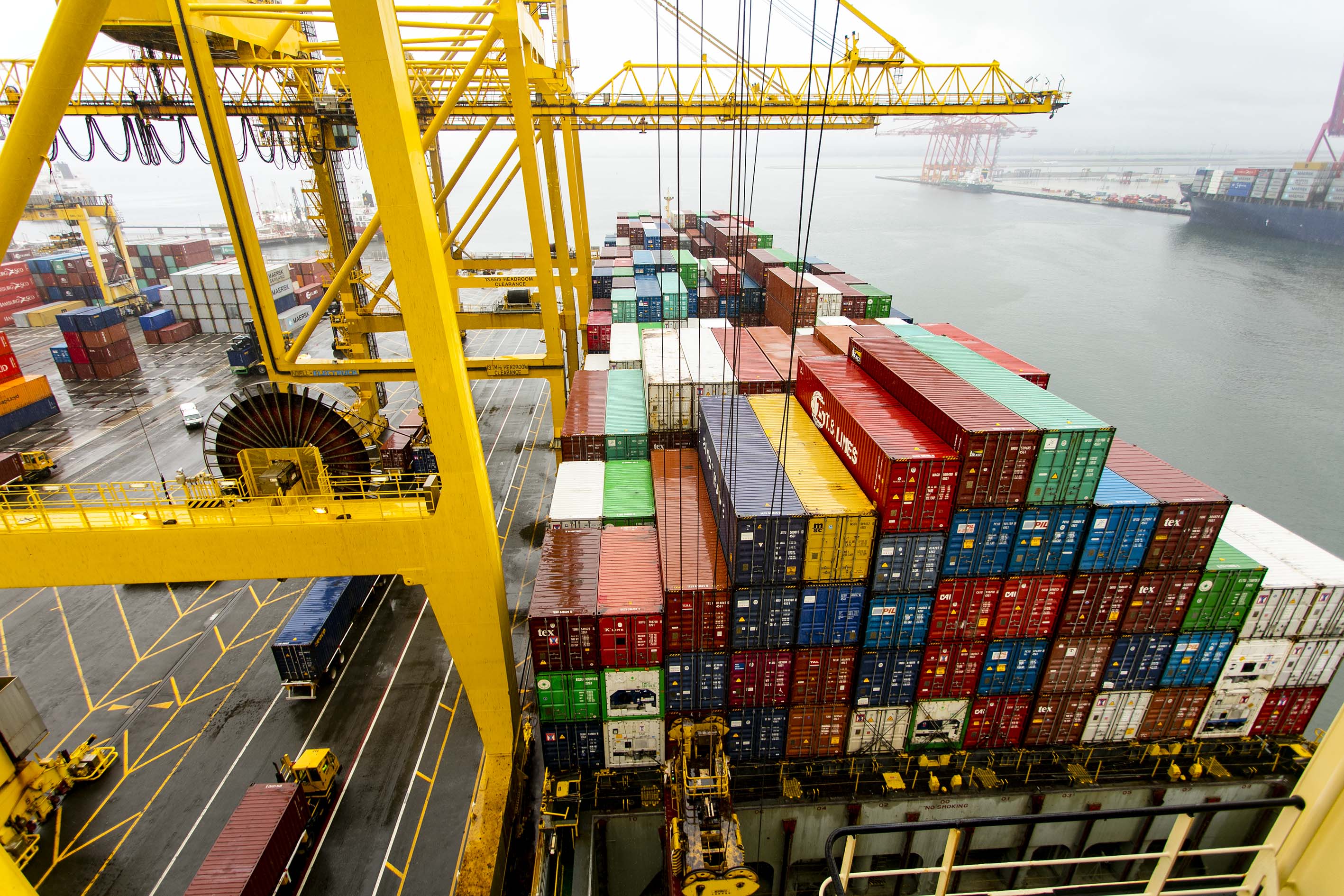 Some 999 containers being unloaded from the Yang Ming Singapore, at Port Botany, Sydney. Image: Andrew Frolows/ANMM.

The result of this growth, which didn’t show any signs of slowing until the global financial crisis hit in 2008, was the fundamental transformation of the shipping industry, its associated transport systems, labour practices and work cultures, and the economies it serves. Centuries-old shipping companies failed to adapt, as did many ports, while new and amalgamated liner companies were able to consolidate about three-quarters of the world’s container business among the top 20 players. From the 1990s, a new era of piracy arose, placing ever-smaller crews in very real danger of hostage and ransom. New challenges stem from terrorism and other forms of illegal trade, which become more and more difficult to police as container volumes increase, while the proliferation of open registries, or ‘flags of convenience’, complicates the shipping industry’s legal, economic and environmental responsibilities. 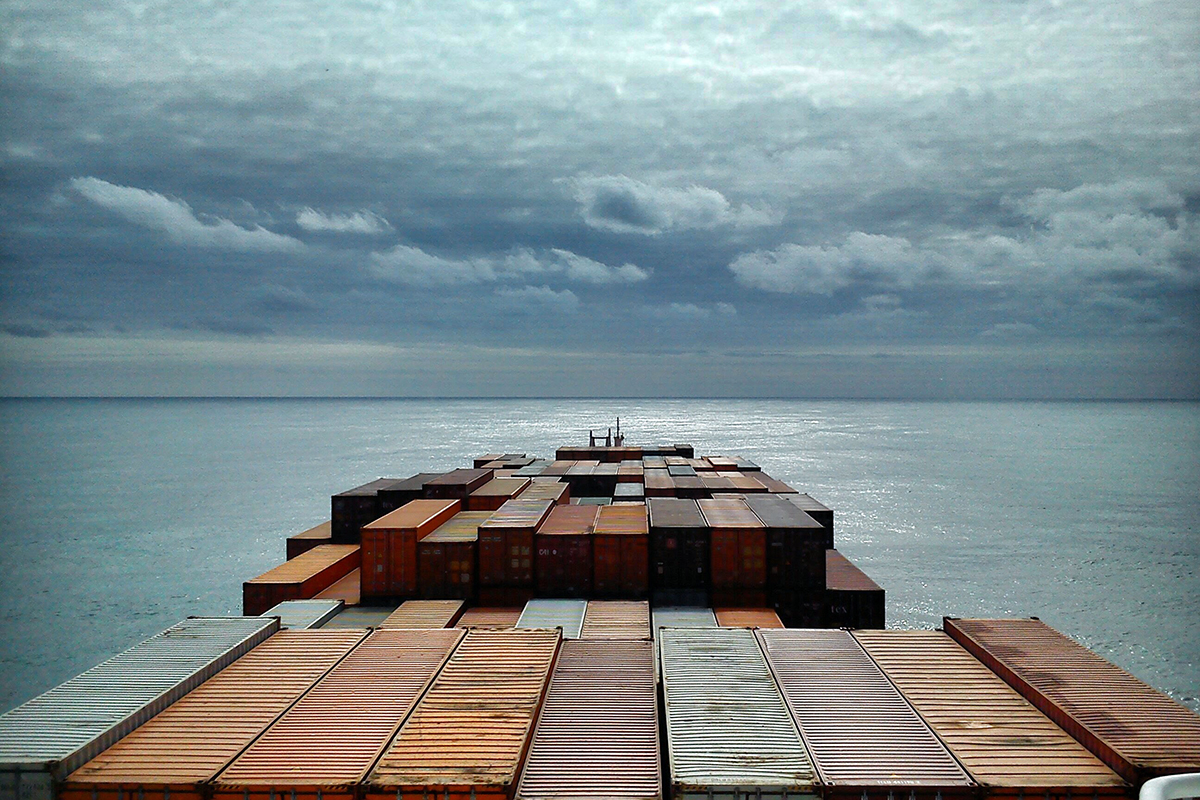 Sixty years on, it is worth taking stock of the container and its impact. As influential as the maiden voyage of the Ideal-X was, the container did not arrive in a vacuum. It was both a symptom of and catalyst for a new era of globalisation prompted by post-war political and economic changes and accelerated by advances in technology and communications. But as Jean-Paul Rodrigue and Brian Slack argue, globalisation could not have taken its present form without containerisation.6 In terms of its contribution to trade growth, the container outstrips all other trade facilitation factors.7 ‘How ironic’, writes British journalist Rose George, ‘that the more ships have grown in size and consequence, the less space they take up in our imagination.’8

With close to 700 million container movements in and out of the world’s ports each year and Australian container traffic set to rise from 7.5 million in 2014 to 19.4 million by 2033,9 perhaps it’s time we made a little more room in our imagination.

Dr Mary-Elizabeth Andrews is a curator at the Australian National Maritime Museum.

View all posts by Mary-Liz Andrews→
Posted in: Digital Stories , Arts and Culture
↑