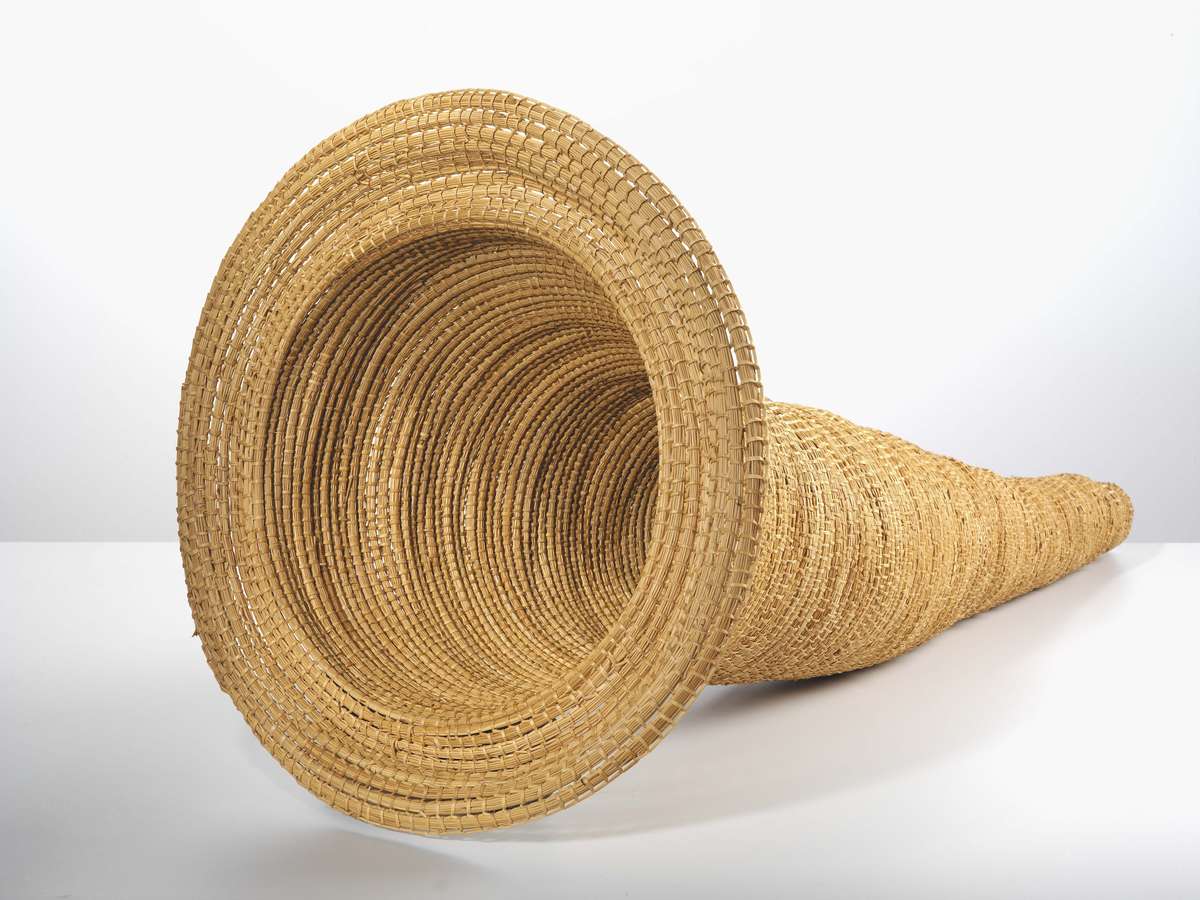 A traditional Aboriginal woven eel trap made by Yvonne Koolmatrie in 1991. The trap is made from a bundle of sedge reed stems coiled with a loop stitch. Yvonne Koolmatrie is from the Ngarrindjeri community in South Australia. Traps such as these were used in conjunction with complex stone arrangements. Reproduced courtesy of Yvonne Koolmatrie ANMM Collection 00015871

Traditional owners will find out next month if their push for a 6,000-year-old network of eel traps in south-west Victoria is to be supported for inclusion on the UNESCO World Heritage List. The eel-farms were built by the Gunditjmara people in south west Victoria to manage eels in Lake Condah and nearby Darlot Creek. They are among the earliest surviving examples of aquaculture in the world.

The eel farms cover more than 75 square kilometres and include artificial channels and ponds for separating eels, as well as smoking trees for preserving the eels for export to other parts of Australia. Just to be clear, this industry and the complex of stone arrangements including houses began around 6,000 years ago – before Stonehenge and the Pyramids. 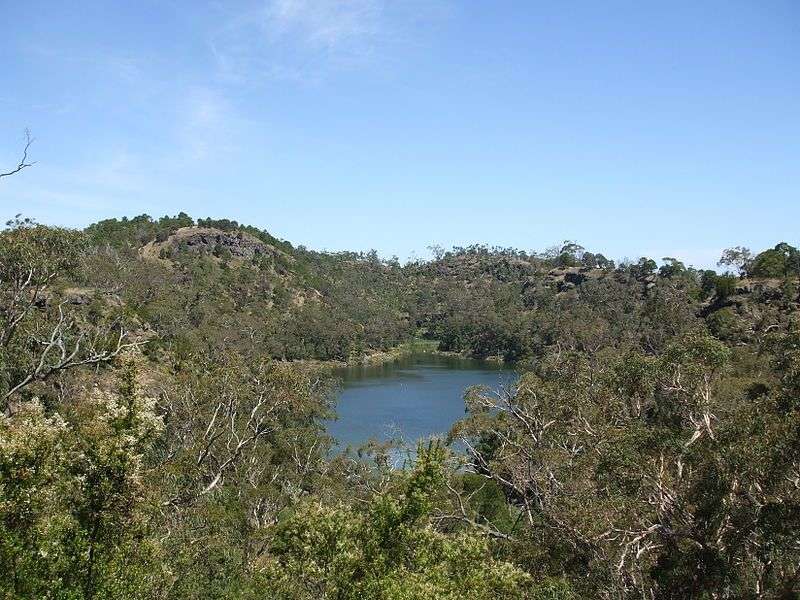 Lake Surprise, Budj Bim ‐ Mt Eccles National Park, Victoria, Australia. Mount Eccles National Park is Victoria’s first co-managed national park. The park is managed by Gunditjmara Traditional Owners and Parks Victoria. According to the Gunditjmara people Budj Bim, an important creation being, revealed himself in the landscape at a site known today as Mount Eccles. This volcanic rock outcrop – an ancient extinct volcano – was the source of the Tyrendarra lava flow that, as it flowed to the sea, changed the drainage pattern in this part of western Victoria, creating large wetlands of the Budj Bim landscape. Image Wikipedia

Known as Budj Bim, the site received national heritage listing in 2004 and has been put forward for inclusion in the Australian government’s nomination to the UNESCO World Heritage Council by the Victorian government, at the instigation of the Gunditjmara people.

The Budj Bim landscape was the area where Robbery Under Arms author Rolf Boldrewood described the Eumeralla Wars. From the late 1830s as squatters rushed to take the fine grazing lands in southwest Victoria that Major Thomas Mitchell had written glowlingly about after his 1836 journey through the area, the Gunditjmara people fought against the squatters for their lands.

Rolf Boldrewood – himself a squatter in the area in the 1840s (his real name was Thomas Alexander Browne) recalled the warfare conducted amongst the rocky and intricate landscape of the Budj Bim – a landscape that was important during guerrilla warfare conducted for over twenty years. After a bitter and bloody struggle including several massacres of Aboriginal people according to Boldrewoode-Browne, some remaining Aboriginal people were relocated to reserves. But many refused to move from their traditional lands.

In 1868 the Victorian government established a mission for the people who had survived the settlers onslaught at Lake Condah, close to some of the eel traps and within sight of Budj Bim. The mission station was officially closed in 1919 and the mission church destroyed by the 1950s. The Gunditjmara continued to live in the area and protect their heritage. According to elder Ken Saunders the Gunditjmara people had continued to trap eels as well.

The mission lands were returned to the Gunditjmara in 1987. They were awarded native title over the area in 2007 and proceeded to restore the lake that non-Indigenous farmers had drained in the late 19th century. The eel traps began to fill again.

The traps are a series of canals and graded ponds, running for some 35km around the lake. Gunditjmara people manipulated water levels to encourage eels to swim into holding ponds and placed funnel-shaped baskets at the spillway between ponds to ensure that smaller eels could slip through and larger eels be harvested.

Eels were transferred from one pond to another, just like a fish hatchery today, and they would be grown until of an edible size. They may also have been stocked from outside the area as well. When the eels were harvested they could be eaten there and then, or smoked in hollows of the Manna Gum for later preservation and trade with other communities.

The traps and other abundant wildlife provided by the lake allowed the Gunditjmara people to remain in one central place, rather than following the food resources over the seasons. Accordingly, they built stone houses around the lake. Archaeologists have suggested there were even villages of stone buildings among the potentially hundreds of stone structures in the area. These are also  included in the world heritage status application. 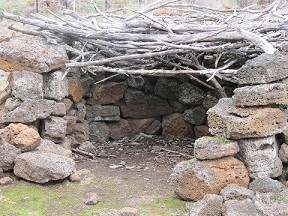 Since the 1970s, archaeologists had suspected that the stone remains in the Lake Condah region were evidence that the local Aboriginal people had lived in villages. But it was not until an eight-year research project was carried out by a Flinders University archaeologist, Heather Builth, that the real importance of the remains became clear.

The area was naturally a wetland, but Builth discovered that the Gunditjmara had modified it with weirs, channels and dams to make the landscape eel-friendly. She estimated the output from these eel farms would have been enormous – perhaps feeding up to 10,000 people, an ancient fishing industry more than a subsistence farm.

Monash University professor of Indigenous archaeology, Ian McNiven, said that carbon dating of charcoal found during an excavation of one of the fish traps found it was 6,600 years old. McNiven said that particular site, called the Muldoons trap complex, appeared to have been remade a number of times over the intervening six millennia, indicating it was continually used.

McNiven and his team of archaeologists working with the Gunditj Mirring Traditional Owners Aboriginal Corporation say their findings show that Muldoons Trap Complex underwent phased redevelopment and major elaboration over the past 800 years. “Muldoon trap complex is currently the oldest known stone-walled fish trap in the world and amongst the world’s oldest known fish traps,” he told Guardian Australia. “It is also the oldest continuously used fish trap in the world … Indeed, the trap was still being used by Gunditjmara people at the Lake Condah Mission in the late 19th century.”

McNiven noted that the extensive network of traps are important evidence in destroying the myth that Aboriginal and Torres Strait Islander people did not farm or improve the land. The deliberate manipulation of the environment to ensure better production of marine resources was a sophisticated form of agriculture, which McNiven said was of world heritage significance.

Aboriginal fish traps made from rocks, Darling River, N.S.W, 1938. State Library Victoria. There are many other examples of Aboriginal fishing and aquaculture sites around Australia. Thomas Mitchell had seen ‘weirs for fish’ in 1836 in the flooded country around the confluence of the Murrumbidgee and Murray Rivers.

The Federal Government has submitted a nomination for the Budj Bim Cultural Landscape at Lake Condah to be included on Australia’s World Heritage Tentative List.

If the nomination is successful, Budj Bim would be the Australia’s 20th World Heritage site and the only place listed solely for its Indigenous cultural value.

The Budj Bim Cultural Landscape must be on Australia’s World Heritage Tentative list for at least 12 months before the United Nations’ World Heritage Committee make a determination on its nomination.

For further information see the 2011 award winning book The People of Budj Bim – Engineers of aquaculture, builders of stone house settlements and warriors defending country written by the Gunditjmara people with Gib Wettenhall