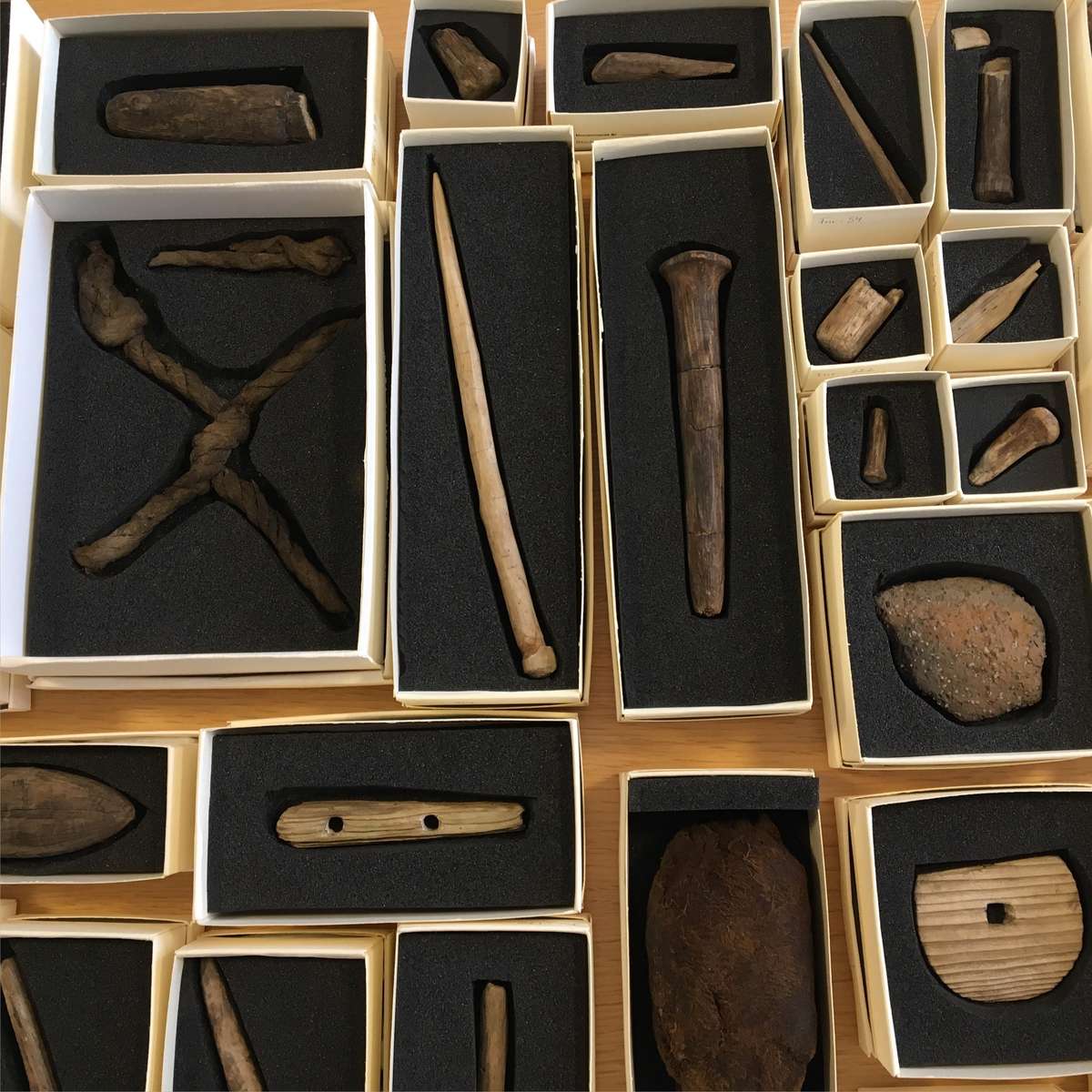 This is part of a series by ANMM curator Dr Stephen Gapps who received an Endeavour Executive Fellowship from April to July 2016. Stephen is based at the Swedish History Museum, the National Maritime Museum and the Vasa Museum in Stockholm, Sweden. He will be posting regular blog updates about Viking Age history and archaeology over the next few weeks under the blog category Journeys.

In my first week of a professional development fellowship based at the Historiska Museet in Stockholm I was pleasantly surprised to be handling Viking Age objects and assisting in selecting some for a display of maritime finds at the famous World Heritage site Birka. 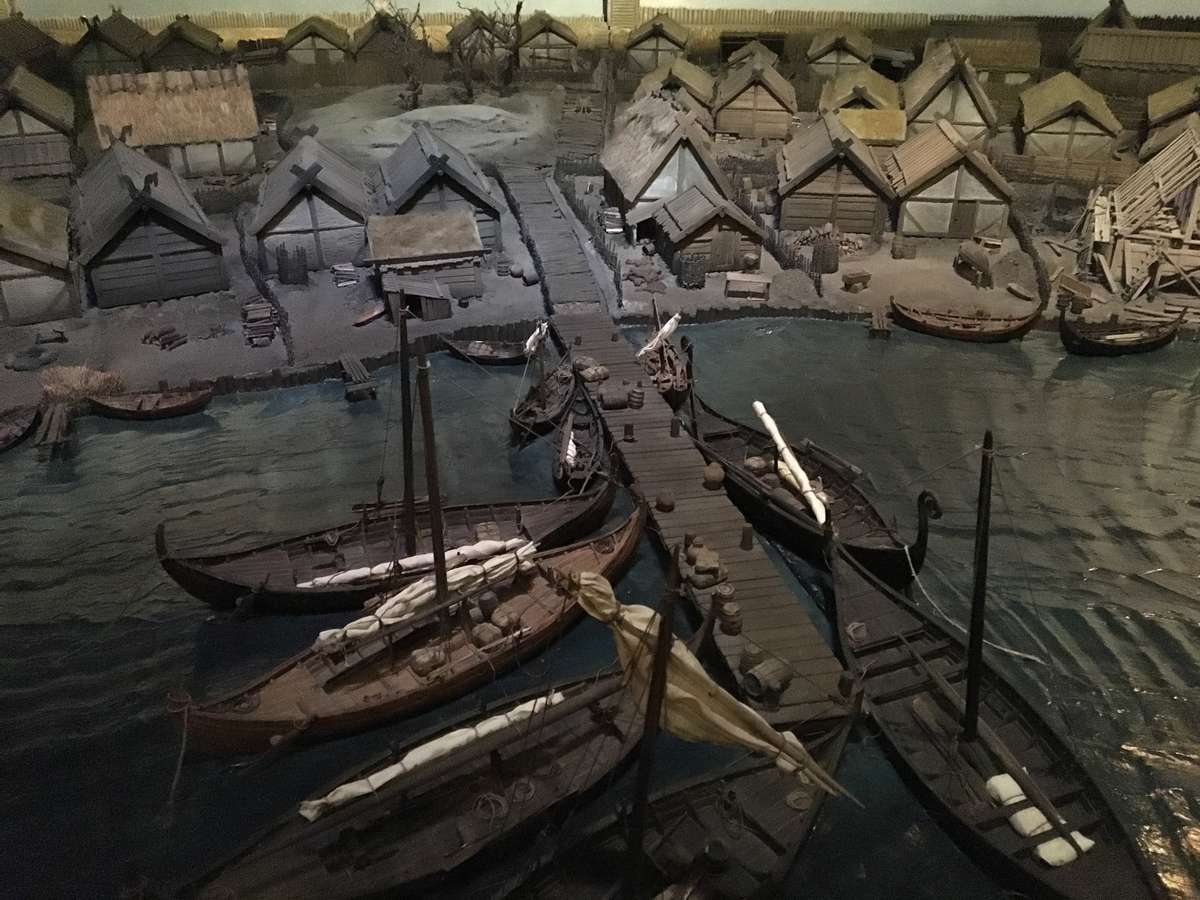 This diorama reconstruction of Birka, based on evidence of some compact plots, shows a well ordered township. More recent investigation suggests it may not have been so compact and orderly.

Described as ‘one of Sweden’s first real towns’, Birka developed from around the year 750 and the archaeological record ends in the late 900s – spanning most of what is regarded as the Viking Age. At its height Birka may have had around 1,000 inhabitants. Situated on the island of Björkö in Lake Mälaren, about 30 kilometres west of present day Stockholm, Birka was the central hub and the most important marketplace in the entire Mälar Valley and around central Sweden during this period.

It was also part of the major east-west trade route and many finds from Birka indicate the widespread travel and exchange that was conducted there. One of the most famous finds is a silver ring with an Arabic inscription. Many of the chamber graves contained exotic goods from across Europe – Birka would have been a very cosmopolitan trading township. 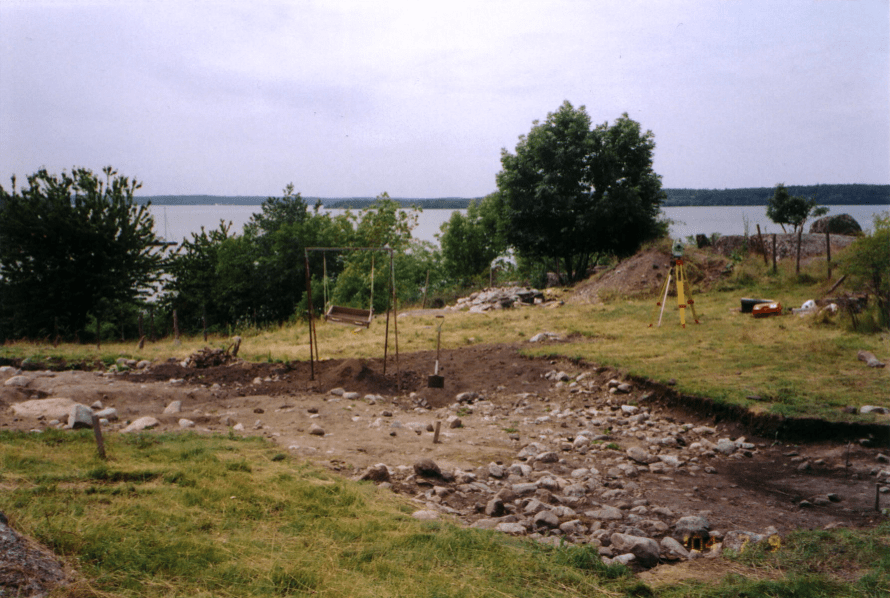 Excavations at Birka in 1993. Alex Petersen

Birka was declared a UNESCO World Heritage Site in 1993. Together with Birka, Hovgården on the neighbouring island of Adelsö (thought to be the administrative centre of the trading township) make up an important archaeological complex. Birka presents an excellent picture of a Viking trading centre from around the years 750 to 980, but also a history of Viking Age archaeology. The first excavations were conducted by Hjalmar Stolpe in the 1870s and have continued to this day, with some of the early sites being reinvestigated and offering new information. More recently, ground-penetrating radar and other new techniques are continuing non-invasive archaeological work on the site.

Birka was established at a central point in the Mälaren lake, drawing on trading networks of the extensive hinterlands of the massive lake system. Its position in modern Sweden is seen in the inset. Sjohistoriska 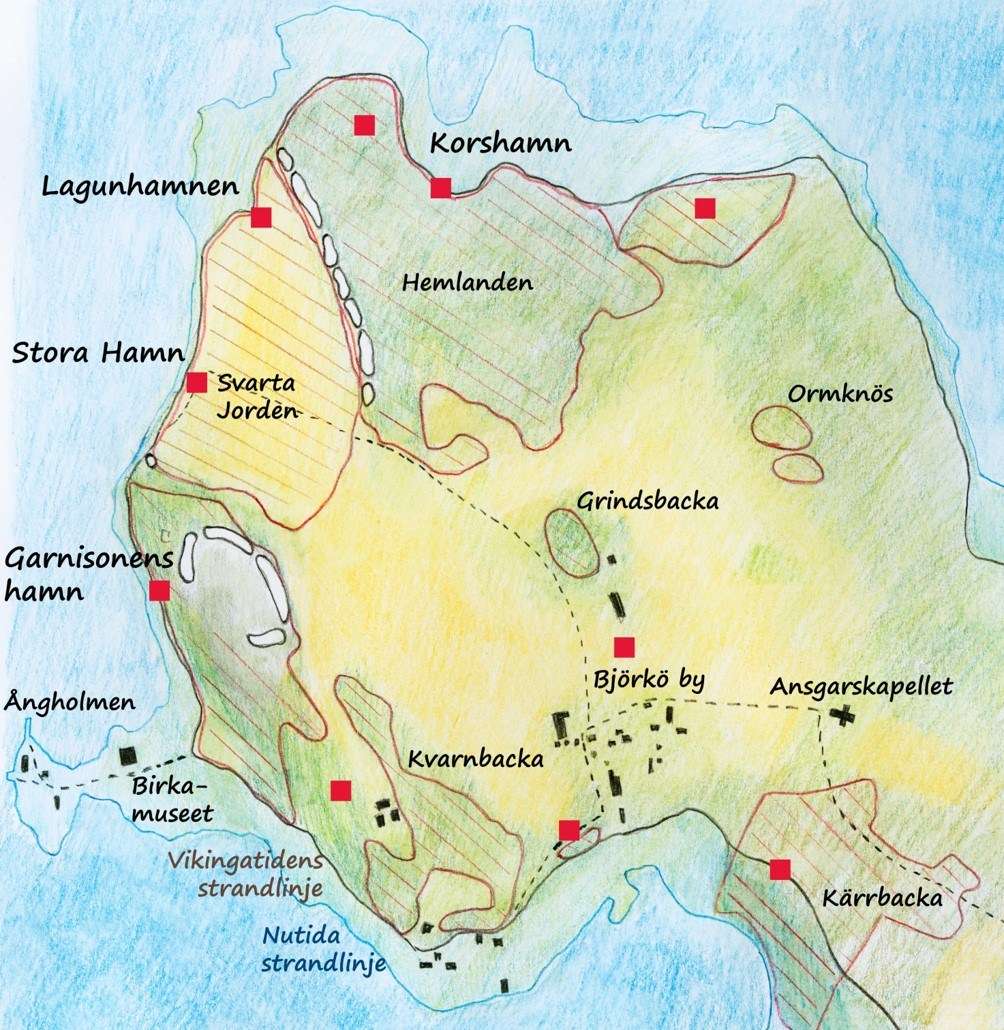 The Birka-Hovgården sites have been effected by postglacial landrise, which has lowered the shoreline of Lake Mälaren by around 5 metres since the year 800. Elements of Viking Age harbour construction can now be found on land. Sjöhistoriska Museet

With a wealth of graves (over 3,000) and a whole township to dig up, the icy waters around the island of Björkö were not that much of a priority for archaeologists. It seemed there was a wealth of information to be gained from the land – much of the shoreline had piles of stones, embankments, and ditches which were all part of docks or boathouse constructions. Research into the Birka site focused on settlement, burial sites and fortifications. 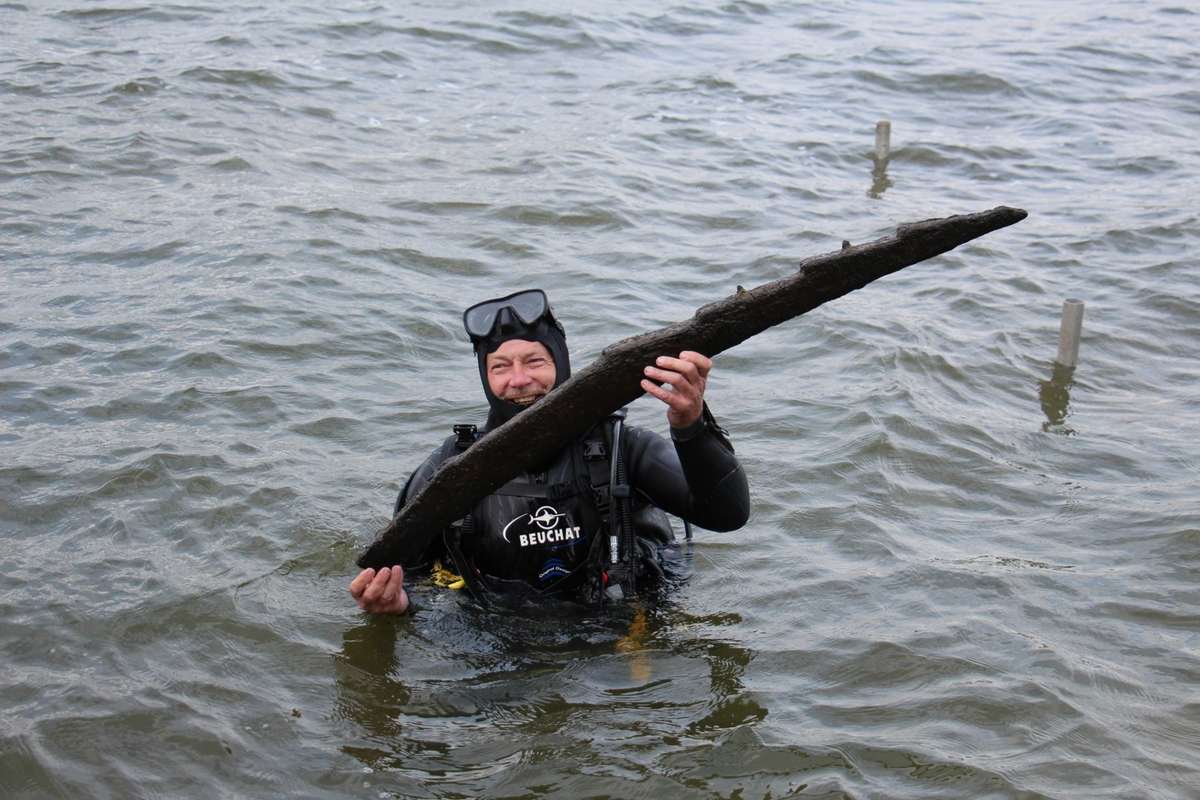 A timber frame from a Viking Age ship brought to the surface by maritime archaeologist Jörgen Denckert of the Viking Ships Museum Roskilde, during field work in 2014. Sjöhistoriska Museet

Considering the first archaeological investigations occurred at Birka in the 1870s, it was indeed a long time before the first underwater surveys began – in 2007. The early finds were not remarkable, but did interest archaeologists. There were as expected, many timber artefacts connected with the boats that once crowded the harbour, but there were also objects more familiar to households such as spoons, toys and jewellery, quite likely to have been washed down from the town into the harbour.

The underwater surveys found worked timbers that confirmed the location of the line of large wooden piles that were driven into the mud in 6-8 metres of water. This ‘pole wall’ made a breakwater, and offered some defence, but was not as significant a construction to be purely defensive. It may have delineated an area for the collection of harbour tolls more than anything. 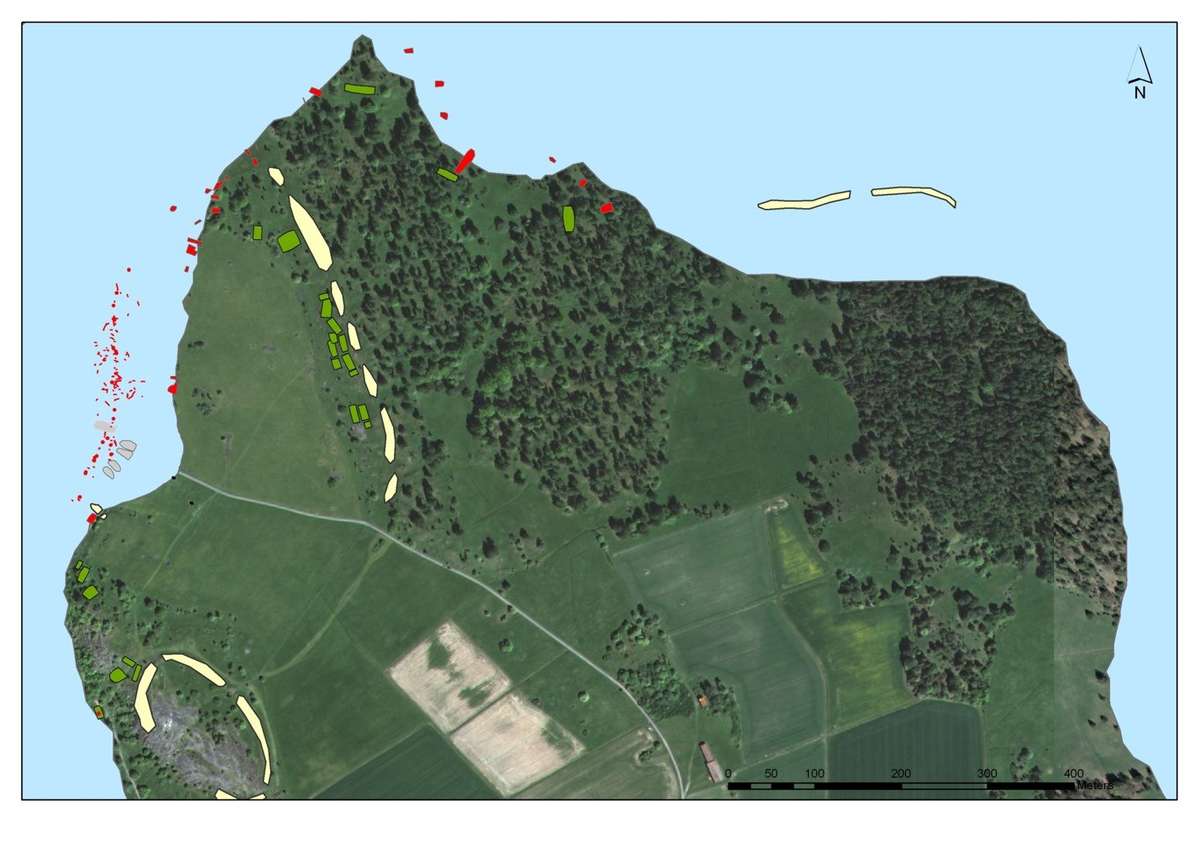 This map shows the reconstructed Viking Age shoreline. Stretching across the bottom of the harbor area, both above and below the clay sediment, were piles and timber remains from the large port facility (in red). The fort can be seen in lower left. The line of the city walls (white) connects the fort and the harbour work.  The harbor area was surrounded by a line of large wooden piles (referred to as the ‘pole wall’) driven into the mud at a water depth of 6-8 meters. The pole wall stretched out to around 100 meters from the shore. The pole wall marked the border of the city, functioned as a breakwater, protected ships from outside attack, and is presumed to have allowed for the collection of tolls. Sjöhistoriska Museet

Excavations in the harbor area now suggest a far heavier construction that included stone piers. The maritime finds at Birka harbour have begun to offer a slightly different picture to the framework of knowledge of Birka during the Viking Age.

Archaeologists with the Sjöhistoriska (or ‘Sea History’ Museum) have decided to introduce a new small display case to the Birka Museum – popular with tourists in the summer months. The underwater finds were at first displayed in water in a tank at the museum. They have now been conserved and analysed and can be re-displayed at Birka. 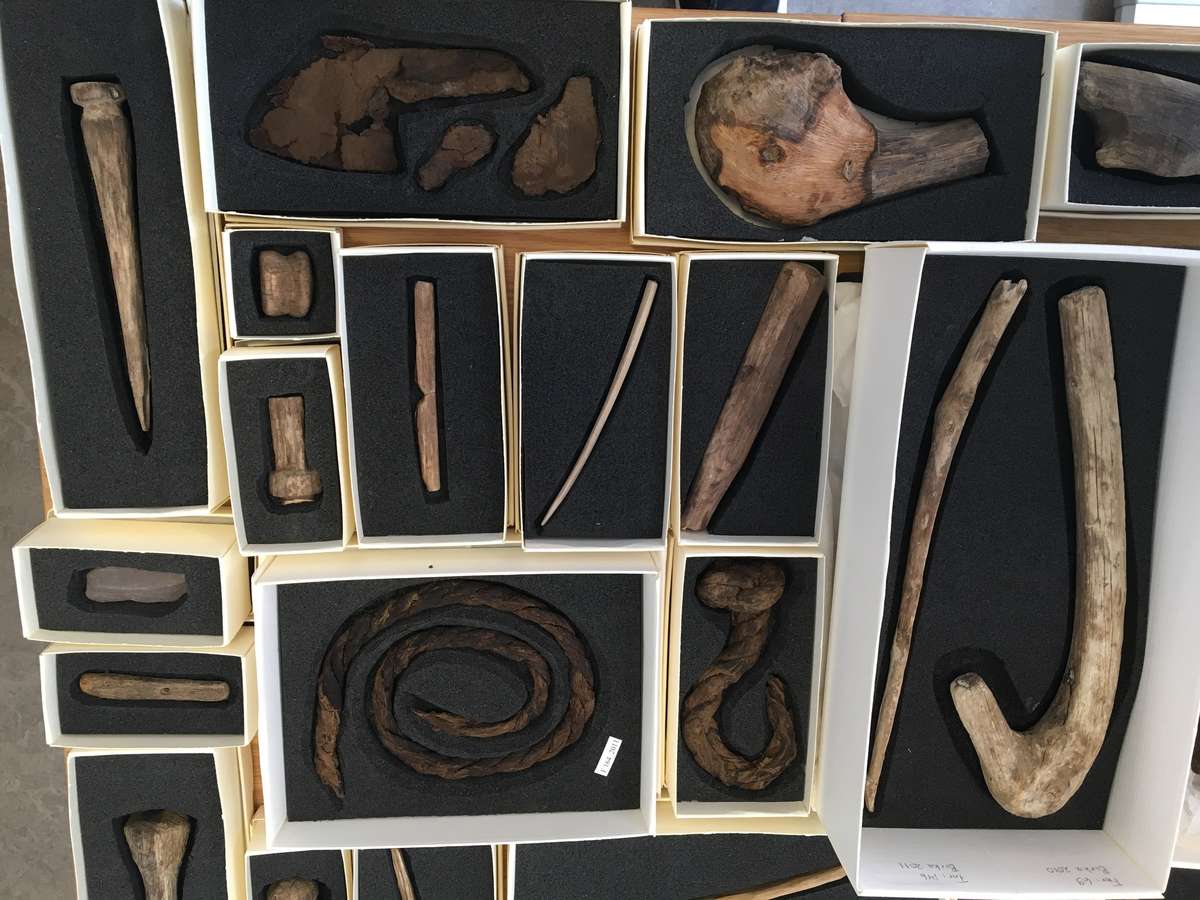 Some of the wooden artefacts – the majority of finds – along with some rope finds.

I assisted Maritime Archaeologist Nina Eklöf from Sjöhistoriska to decide on the contents of the small display, to be installed in May for the summer tourist season. The vast majority of the over 800 finds were timber, many pieces related to boats such as pins and toggles of various sorts and sizes. It was important to show some the best examples of these.

We also thought it useful to show both the surprising array of different types of finds that had been very well preserved in the layers of harbour mud. A section of anchor rope found underneath what was obviously an anchor stone, an intricate metal broach, amber beads, a sharpening stone, and some textile materials were included. 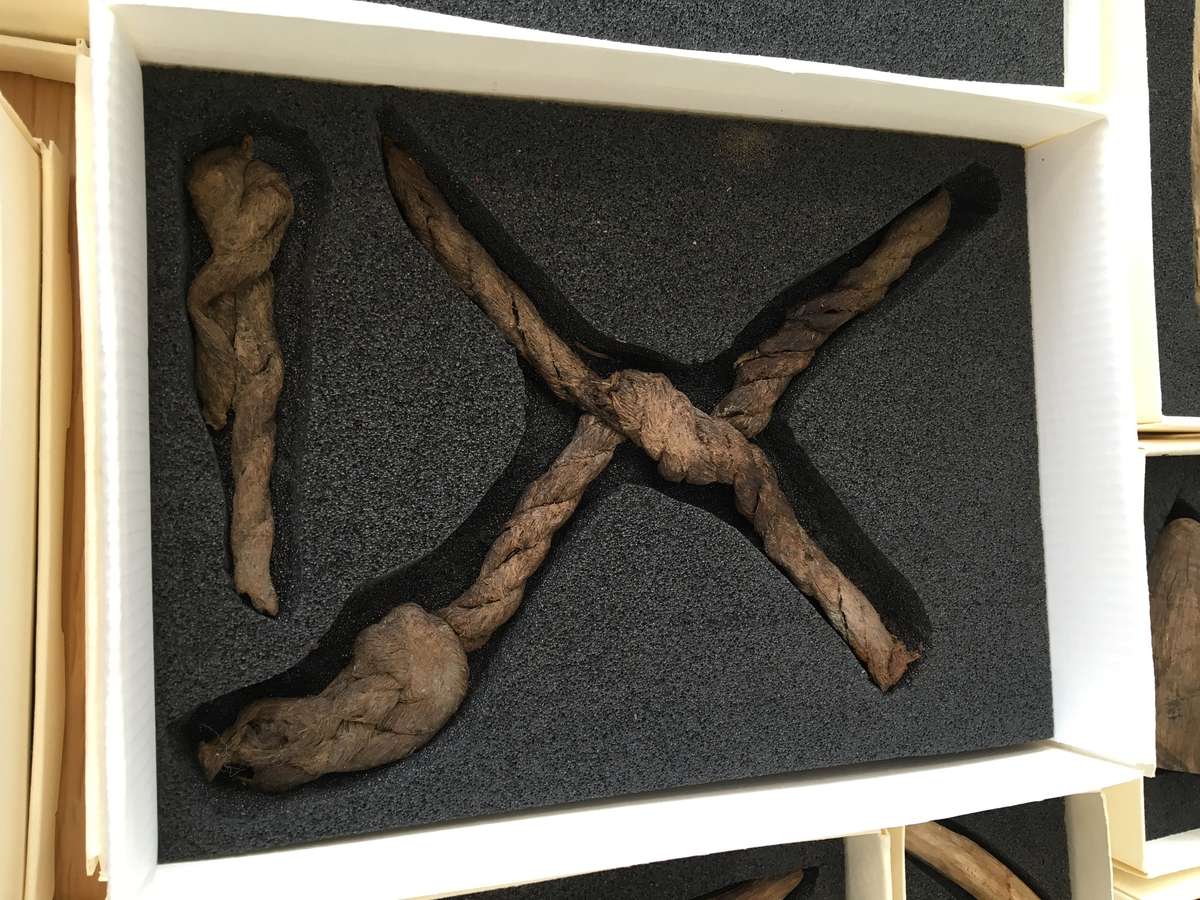 An anchor rope, found under a stone, still in position to bind the rock anchor.

The condition of the textile materials is quite amazing. Their preservation under water shows the value of conducting maritime archaeology here. One wad of textile is particularly intriguing. It is obviously a piece of cloth tightly wrapped and soaked in tar and was probably used as a form of brush or dipper in tarring or caulking. Was it a discarded piece of sail cloth? Perhaps a leg wrap? 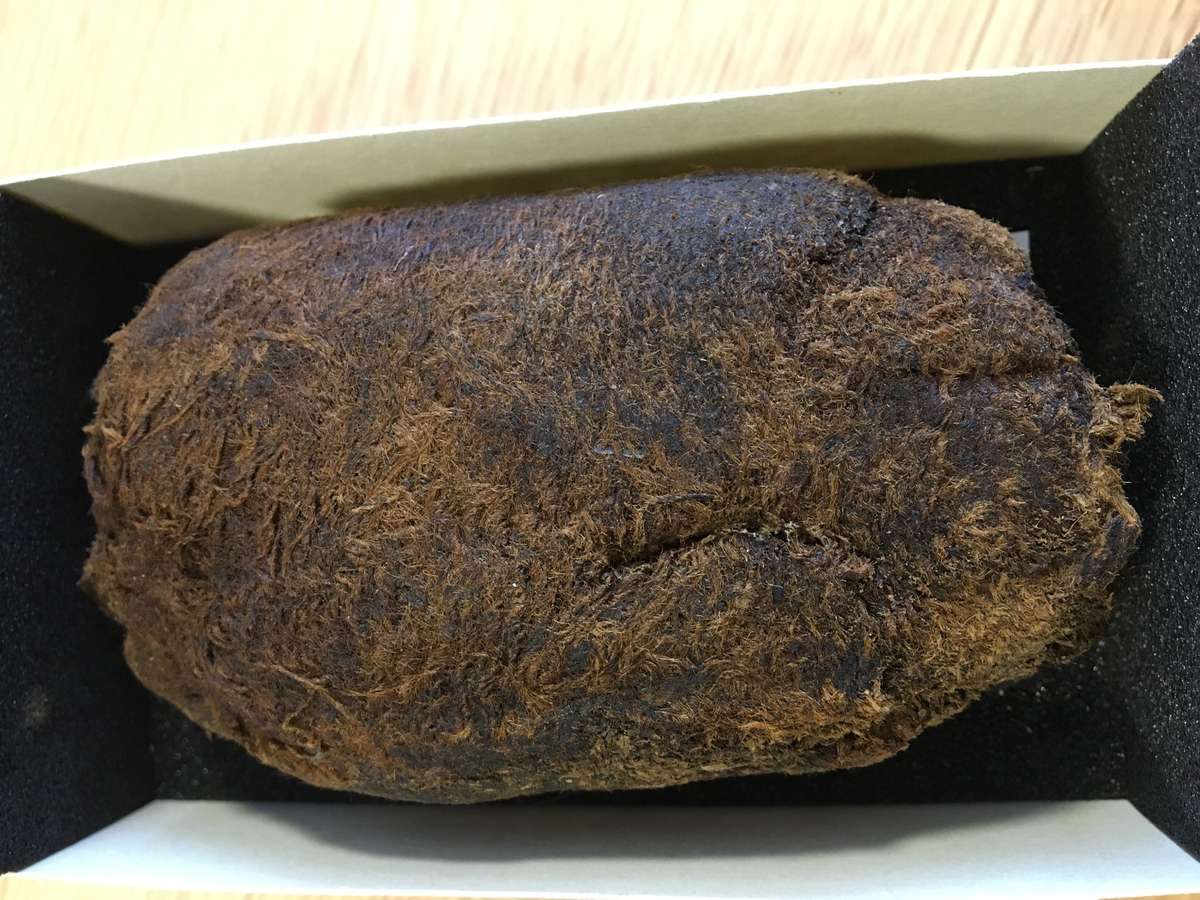 A wad of tarred textile thought to be used on boats. The material still exudes the smell of tar.

Another artefact I found fascinating was a bone skate or isläggar. While they are common finds (there are 290 skates from Birka alone), they were mainly used by children, highlighting the variety of daily life material to be found in the harbour. 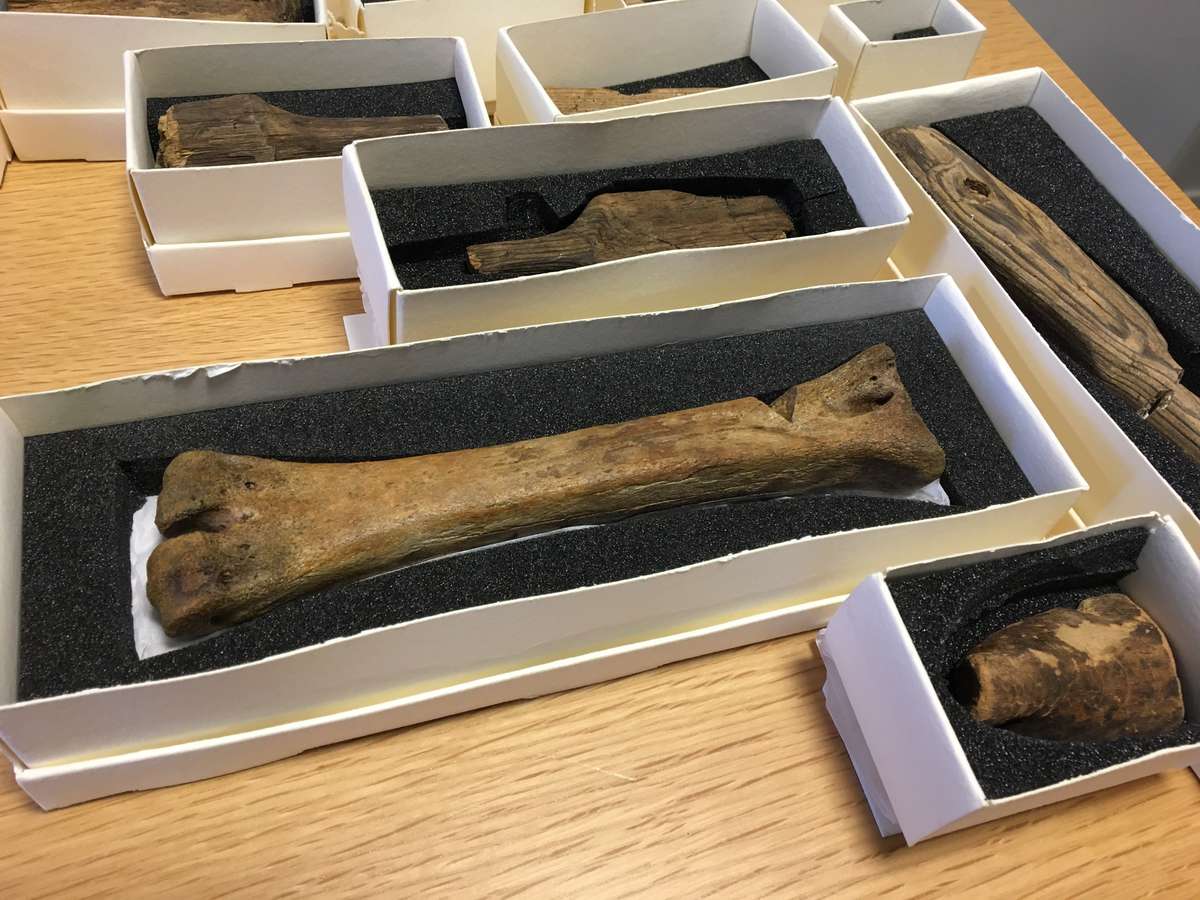 Bone ice skates can usually be identified by their shaping to suit the sole of the wearer and abrasions from the ice.

After more than a hundred years of archaeology on the site, maritime investigations since 2007 have proven to be an important afterthought. Our selection of Birka Harbour material will be on display at the Birka Museum this summer.

This small wooden object has been suggested as being a shipwright’s bevel but has not been confirmed. Do you know what it might be?

With thanks to Nina Eklöf, Sjöhistoriska