When I first heard about Ghost Nets Australia and its work collecting discarded marine and fishing waste and human-made debris, I was intrigued. As I learnt more about the organisation’s inspiring, creative and innovative environmental projects, I began to appreciate the deeper complexity and change-making effect of their work. 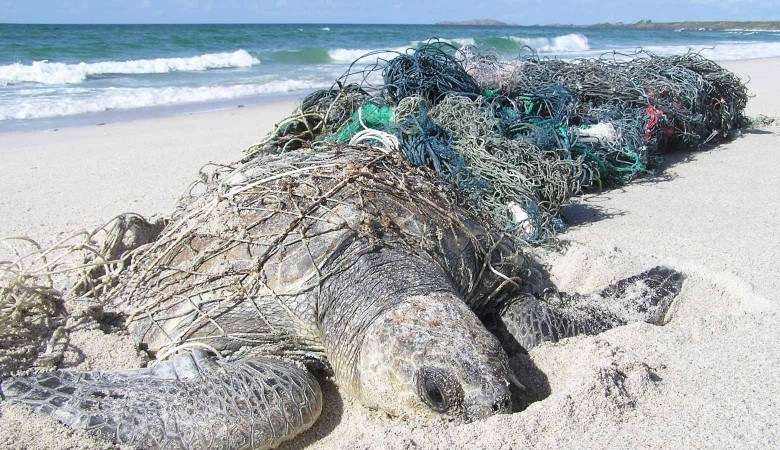 Ghost Nets Australia is a multi-faceted organisation dedicated to rescuing and protecting marine environments from ghost nets—fishing nets which are lost at sea and collect marine organisms as they float in the oceans and wash onto shores. Working with Indigenous Ranger Groups and volunteers, Ghost Nets Australia collects massive amounts of discarded ghost nets and marine debris from coastal areas, creating art from it, educating people, collaborating with communities, collecting data and bringing about lasting change. 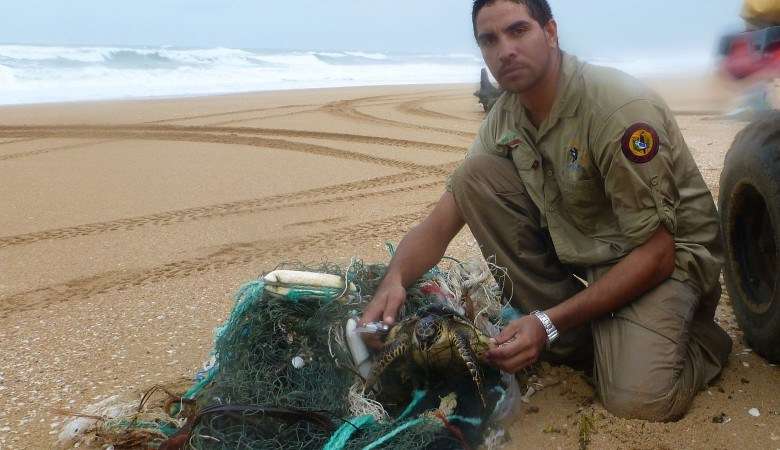 Ghost nets are a major threat to marine fauna and flora. Marine debris such as thongs, plastic bottles and cans are also collected. Most ghost nets come from discarded fishing vessels from the Indonesian region and Arafura Sea, and the majority are from from trawl fisheries and gill nets. The data collected by Ghost Nets Australia shows that most nets are found in the far north of Australia, especially the Gulf of Carpentaria where 90% of the nets are found. The Gulf of Carpentaria is one of the last remaining ecosystems for endangered marine and coastal species such as six of the world’s seven marine turtle species, dugongs and sawfish. Ghost Nets Australia prioritises rescuing turtles, which represent 80% of marine life caught in the nets, with over 300 turtles rescued so far. Since 2004, over 13,000 nets have been removed from Australian beaches and estuaries.

Ghost Nets Australia and the Ghost Nets Art Project aims to transform the destructive ghost nets and marine debris materials into artworks. A major part of this work is community collaboration and community workshops, predominantly held where ghost nets are found. This not only benefits the environment, but has wider positive effects for communities and for educational purposes. 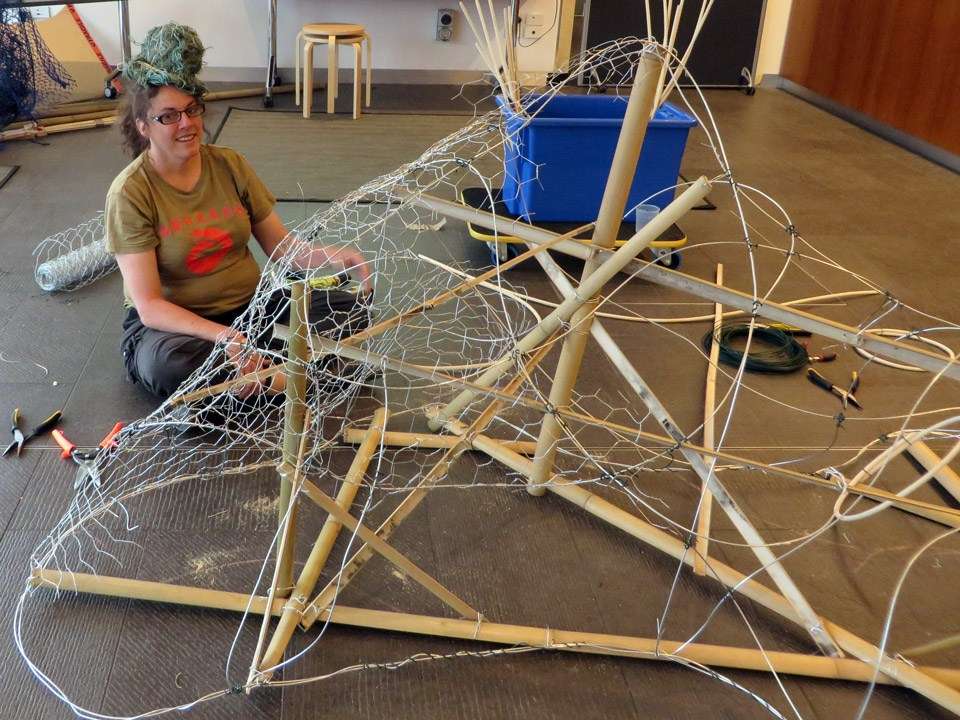 Sue Ryan, Director of the Ghost Nets Australia Art Project, working on the initial structure of the bommie at the Australian National Maritime Museum.

The museum is excited to be working with the Ghost Nets Australia on a collaborative sculpture of a coral reef ‘bommie’, or coral outcrop, which will be part of our upcoming exhibition Voyage to the Deep: Underwater Adventures. In September, we hosted a week-long workshop with visiting artist Karen Hethey and Ghost Nets Art Project Director Sue Ryan, who helped create the structure of the bommie. The sculpture recreates the seafloor environment and coral reef ecosystem, using collected ghost nets and marine debris, all stitched together using fishing line. 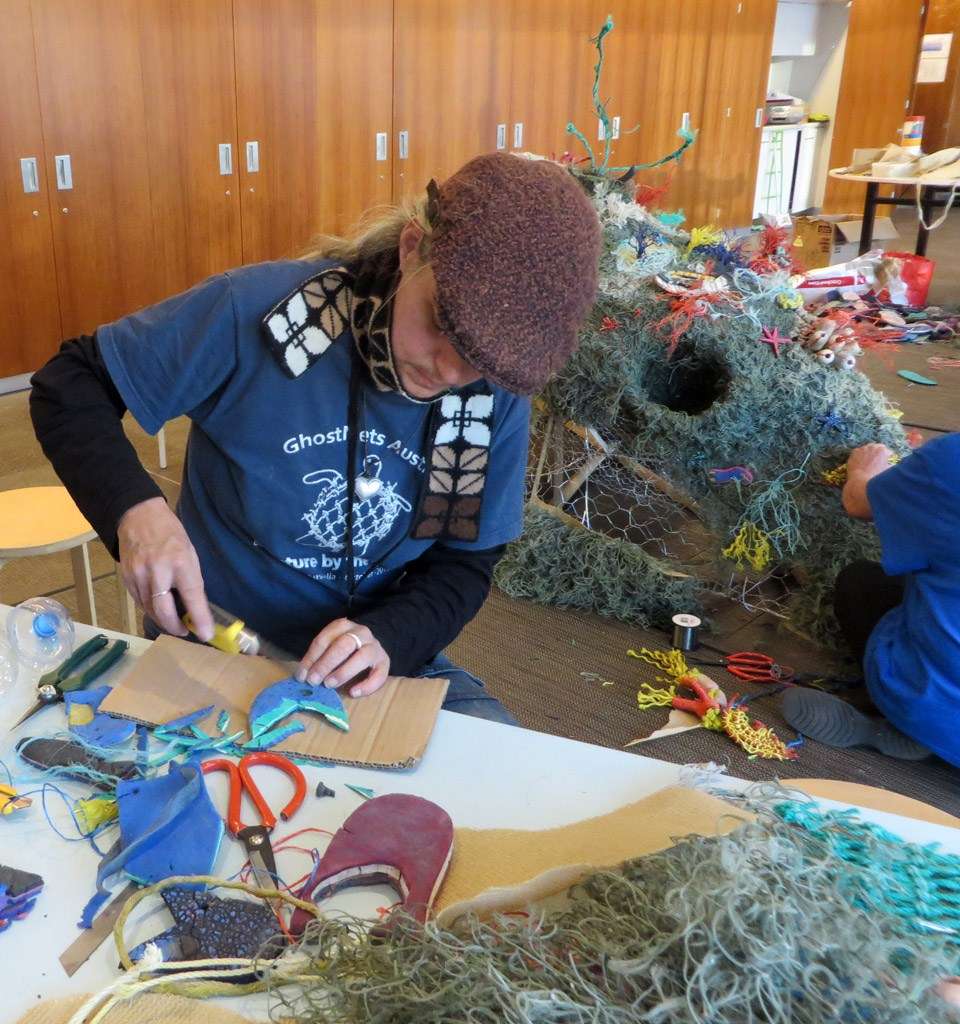 Artist Karen Hethey working on marine creatures made of thongs and marine debris for the bommie at the Australian National Maritime Museum.

The sculpture is an ongoing project. Staff, volunteers and museum visitors have assisted over the past few months, adding coral made of ropes, marine creatures made of thongs, fish made of bottles, ropes and ghost nets. Members of the public are also invited to contribute. 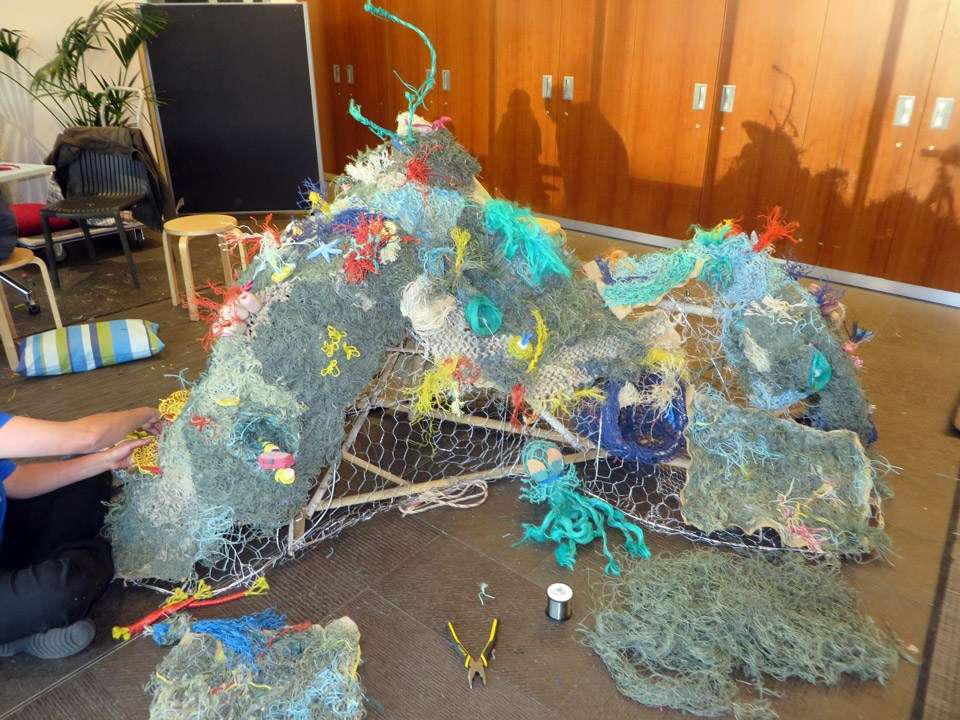 Progress: museum staff and visitors contributing to the bommie sculpture.

Ghost Nets Australia’s projects educate on a wide-reaching scale, and this has ongoing positive impacts on the environment, local communities, and has a significant role in influencing lasting change for present and future generations.

See the bommie at Voyage to the Deep, open from 9 December 2014 to 27 April 2015. Read more about ghost nets on the Ghost Nets Australia website.

To learn how to make your own marine creatures for our ghost net bommie, stay tuned for part two of this blog.

View all posts by Guest→
Posted in: Oceanography , Ghost Nets
↑