How many of us have kept certificates, ribbons or medals, things we won at the school athletics or swimming carnivals, or maybe you have one of those sewn together collections of horse ribbons from pony club expeditions that started at ungodly hours in the morning? Perhaps you can go better and there are some district football or cricket club trophies that need dusting off if you are brave enough to show the family. What if you had a World Championship tucked away in the cupboard?

Brian Stewart does, and this is his Collection from when he sailed on Myra Too, on display with the replica champion 18-foot skiff. The original Myra Too was built at Berrys Bay by legendary Sydney shipwright Billy Barnett, now 99 years old. In the 1951 season Myra Too won the NSW, Australian and World Championships and with Billy as skipper, it was crewed by forward hand Sid Ferguson, sheet hand Fred Evennett, jib hand Andy Costyn, swinger Jack Davies, and Brian Stewart was just the bailer boy.

Billy and Brian are the only surviving crewmembers, and were reunited at the naming ceremony for the replica in March this year. The pair ‘bookend’ the crew hierarchy so to speak, and Brian has cherished memories of being a teenager amongst men, now over 60 years ago. He raced on Myra Too and the following season on Myra III. 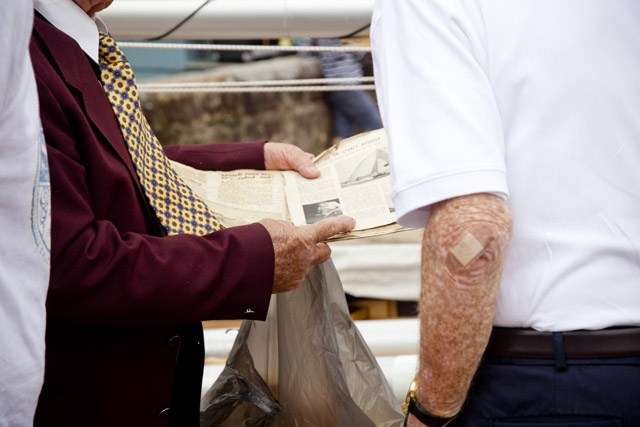 Brian Stewart shows his sailing scrapbook to Billy Barnett at the launch of the replica Myra Too. The scrapbook and replica are both currently on display. ANMM Photo by Zoe McMahon

Throughout his life he has kept a few special items left from those days; a pennant, ribbons, blazer pockets, and a scrap book. It’s not quite in the same league as the Olympic sailor’s gold medals that were in the same display cabinet before his material went in, and with modern publicity that team has happily enjoyed much more than their allotted 15 minutes of fame. These more modest awards mean as much to Brian as the gold medals did for their winners. So this is his opportunity to show them off.

Although the youngest of the crew, Brian was an integral part of the team, and this is recognised by his own personal championship pennant from their win in the 1951 Australian Championship. Hand painted in the colours of the winner probably within hours of the final race, age has taken its toll on the fabric- but not on the memory of the win. 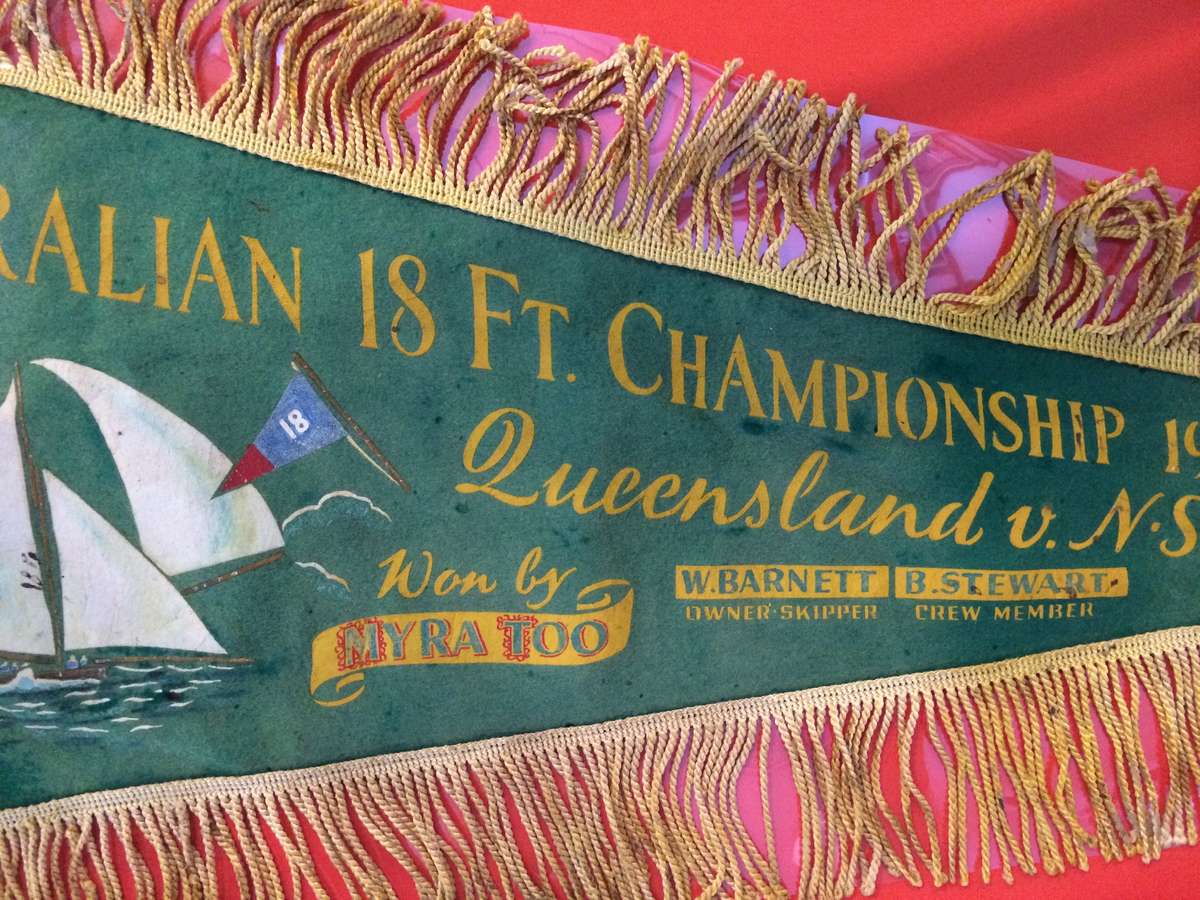 Detail of Australian 18-footer Championship Pennant currently on display. Awarded to the crew of MYRA TOO. On loan from Brian Stewart (bailer boy)

The crews represented their club, state and country at these events, and wore blazers as part of a team uniform. Race winners were awarded pockets to sew onto their blazers representing the event or trophy they had won, and two of these have survived, one each from the Australian and the World championships in the 1951 season.

Two sections of ribbon, rolled up to help preserve them, are parts of much longer ribbons awarded to the winning skiff in each championship, and handed across as soon as the boat has finished the last race, while it was still out on the water. This tradition allowed the winning boats to show off their victory. The red, white and blue ribbon is the World Championship one, while the faded green and yellow one is from the Australian championships, and is seen in the Hall image noted below. The ribbons were divided into sections and shared amongst the crew.

If we all donated our scrap books and albums to National Archives they would need a hanger to store the dusty pile, hardly anyone doesn’t have something tucked away securing childhood and family memories for just a bit longer. Brian’s one is an old school exercise book complete with the work partially hidden under the material that’s been stuck in, and it keeps intact some of the reports and classic images of the races collected by him and his family at the time, and records how dominant Myra Too was that season.

Which brings us to– Myra Too. 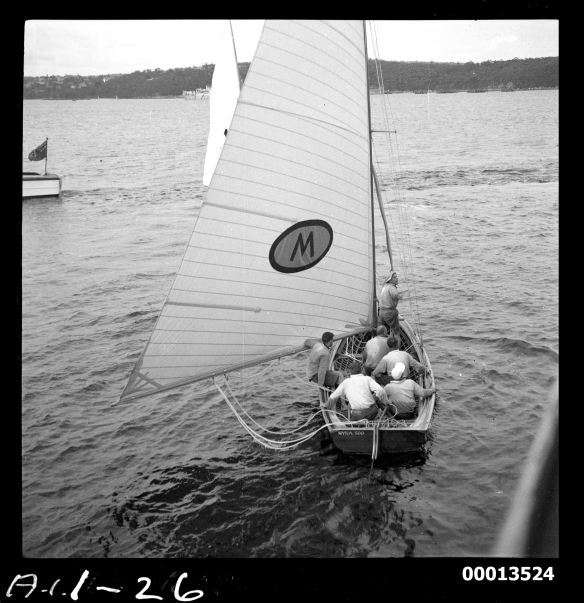 Crew of Myra Too celebrate after receiving the Championship ribbon during the 1951 National 18 footer title. William J Hall, ANMM Collection 00013524

We added an image from the collection that depicts Myra Too soon after winning the 1951 National 18-footer title for the Australian Championships. The championship ribbon has just been handed across to the crew and is about to be hoisted on the spinnaker halyard. Skipper Billy Barnett is on the tiller, and sitting on the port side gunwale is a teenage Brian Stewart.

The Australian National Maritime Museum helped with research for the replica’s construction, supplying copies of many photos from the William Hall Collection which provided valuable detailed information on the layout and rigging of the original Myra Too. Another of the images, showing the fleet racing and Myra Too in the background is on the wall in Wharf 7, above the skiff. William Hall and his father had been photographing Sydney’s sailing scene for decades and these images were taken towards the end of the family’s career.

Brian has seen the boat and it’s been a huge lift to his spirits, and just the other day his brother Graham and family came by from down south to see it all too, and more stories flowed of Sydney sailing, life at the Quarantine depot where the Stewarts lived, and those ‘wicked’ dance nights on Thursdays. I wonder what memories each one of our collections will bring back in 60 years’ time?