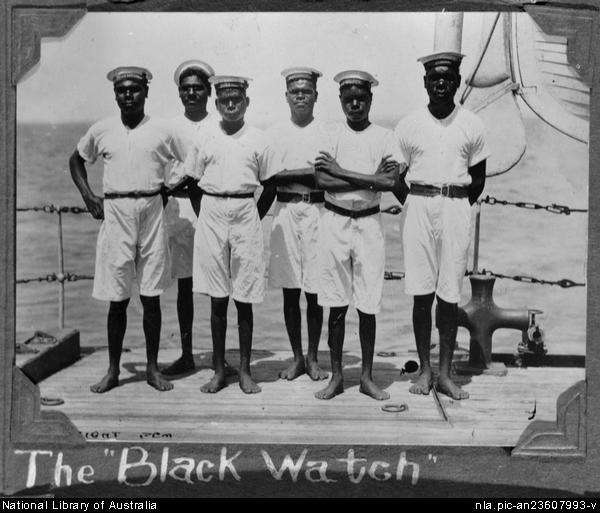 Black Sailors on HMAS Geranium in 1926. From an album compiled by crew member Petty Officer A A Smith. National Library of Australia nla.pic-an23607993

NAIDOC Week (celebrating National National Aborigines and Islanders Day) is held every second week in July. The NAIDOC theme for 2014 is ‘Serving Country: Centenary & Beyond.’ The theme honours all Aboriginal and Torres Strait Islander men and women who have fought in defence of country.

While we are starting to learn more about Aboriginal and Torres Strait Islanders who fought as Black Diggers during World War I, what do we know of any Indigenous sailors?

The image above shows Aboriginal sailors on HMAS Geranium when it was conducting a mapping survey of waters across the north and west of Australia in 1926. They may well have been recruited for their intimate knowledge of the area. The title ‘Black Watch’ – while a reference to the famous Scottish regiment – may also refer to their role and skills in surveillance.

In fact, the military recruitment and service of Aboriginal and Torres Strait Islanders for their skills and knowledge of country has a long history – right from the early colonial period when British soldiers needed guides through the bush. Some Indigenous men managed to join the Australian colonial forces, such as the first recorded Aboriginal man in uniform, Thomas Bungalene, who enlisted in the Victorian Colonial Navy in 1863 – though Thomas seems to have been sent to the navy to ‘benefit from the discipline’.

While recent focus on Black Diggers during World War I has shown there were hundreds who served – often unrecognised and who continued to be unrewarded long after the war – it appears there are no historical records of Aboriginal or Torres Strait Islander service in the Royal Australian Navy (RAN) at this time.

Considering that many Aboriginal and Torres Strait Islanders had a long tradition of working in maritime industries – from fishing in the early colony of New South Wales to voyagers such as Bungaree and his circumnavigation of the continent with Matthew Flinders in 1803, to whaling in the southern oceans and pearling in the north and west – it would be surprising if some Aboriginal or Torres Strait Islanders had not served in the navy before the sailors on HMAS Geranium in 1926. 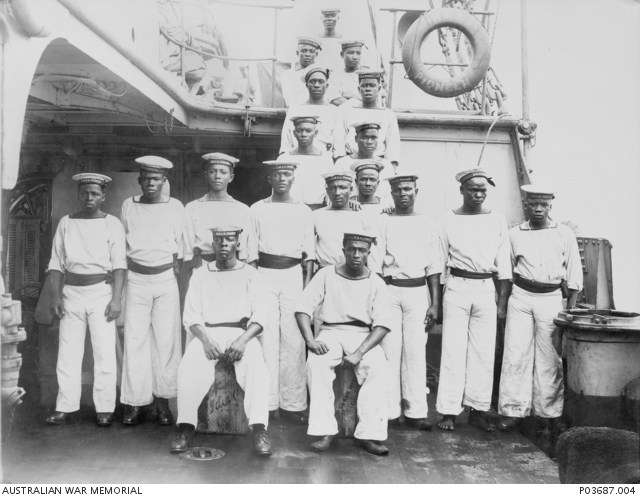 Seedie Boys on HMAS Pioneer circa 1916. Seedie boys were so named because they were subjects of the Sultan or Seyyid of Zanzibar. Australian War Memorial collection

Research for our upcoming exhibition War at Sea – The navy in WWI has shown that the RAN was a willing recruiter of non-RAN personnel from its inception in 1913. For example, it followed the tradition of Britain’s Royal Navy in recruiting ‘Seedie boys’ from West Africa in 1915. Early in the war the RAN used the services of Japanese pilots and Melanesian ‘police-militia’ in navigating New Guinea waters and in the occupation of the German colonies in the Pacific.

So too, Chinese seamen were taken on in various roles – particularly during patrols in South-East Asia when crew illness rates were high. Often these non-Australian temporary recruits were tasked with the dirtiest jobs such as cooking, laundry and the worst of them all – loading and stoking coal. The Seedie boys were provided with Second Class uniforms and some recognition of service.

The RAN differed from the Australian infantry in that it was a small, professional service established before the war. It didn’t need the tens of thousands of volunteers that the army was to require. After Federation in 1901, Aboriginal and Torres Strait Islander men were not citizens and therefore could not join the armed forces. While some hid their identity and managed to join up, and others were overlooked when recruitment became more desperate, it would have been very difficult for such men to join the small naval service – which comprised just two to five thousand personnel throughout the war.

But with the RAN’s history of temporarily recruiting non-Australians, and the long history of Aboriginal and Torres Strait Islander people willing to serve their country despite Australian racism and lack of recognition of their service – the question arises whether there were any Black Sailors who served along with the Black Diggers in WWI?

View all posts by Stephen Gapps→
Posted in: Indigenous , Navy and defence
↑