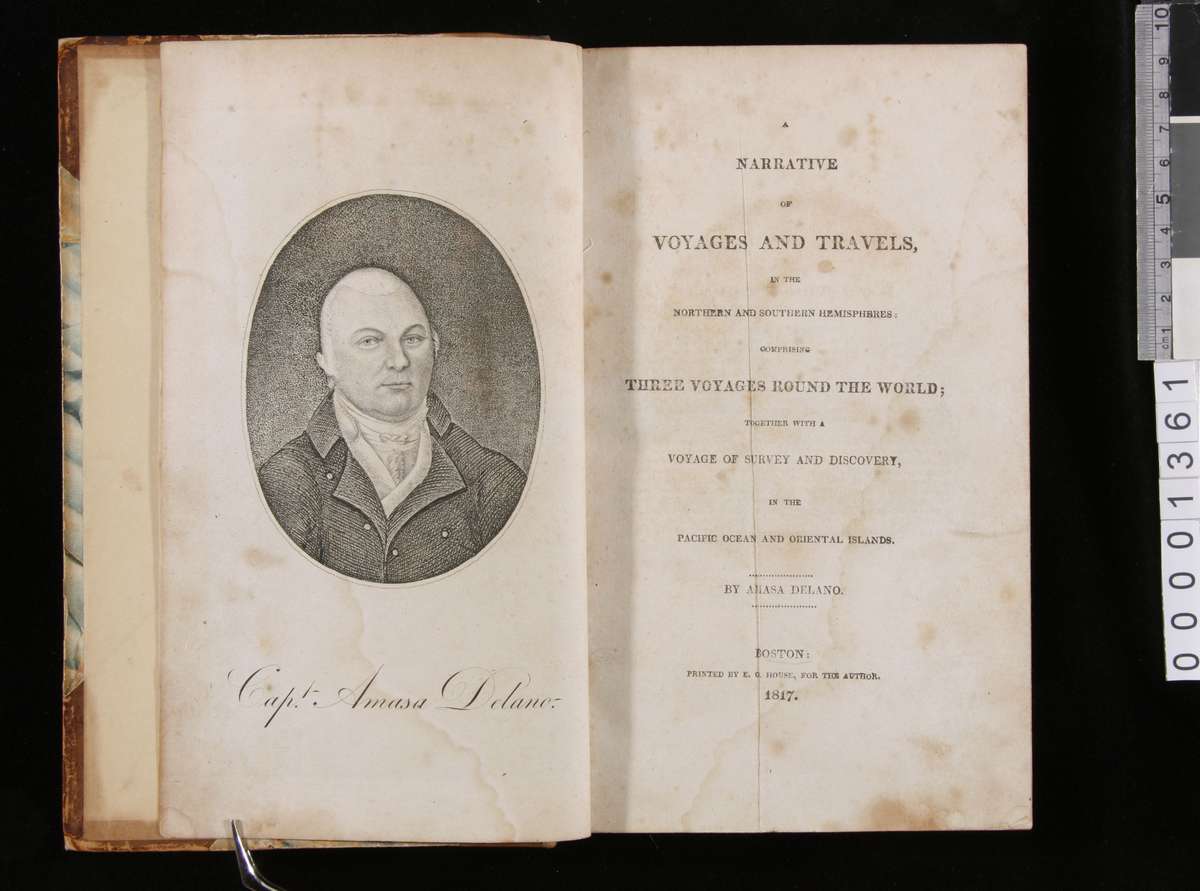 In the history of maritime mutinies, it is the mutiny on the Bounty that is most often recalled, and it is generally assumed that mutinies involved tyrannical captains whose crews have rebelled. Yet in 1804, a mutiny of a different sort took place, and Captain Amaso Delano, an unsuspecting American sea captain at anchor near Chile, found himself both witness and participant in a dark page in history.

Delano and his crew aboard the Perserverance had been at sea for a year and a half hunting seals and whales, and he wrote that ‘future prospects were not very flattering’. It had not been a profitable 18 months, and Delano had not made enough money to pay the crew even 20 dollars each. Added to these financial woes, Delano tells of having unknowingly picked up 17 ‘outlawed convicts’ from Botany Bay who were a source of unending trouble throughout the rest of the journey. There was a constant fear that they would somehow steal one of the smaller boats to escape and discipline was a daily struggle. Although Captain Delano managed to offload a number of the worst behaved convicts, those remaining, as well as other ongoing problems, were putting him under a great deal of pressure when the Spanish ship Tryal appeared while Perserverance was anchored at Santa Maria, Chile.

Captain Delano’s account of what happened next could be the stuff of fiction, and indeed Herman Melville, author of the great whaling novel Moby Dick, was so inspired by the tale that he wrote a fictionalized account of the events as told in Chapter 18 of Delano’s book, Voyages and Travels. In his short story, ‘Benito Cereno’, Melville retells the events leading up to the fateful encounter of the two ships and the consequences that followed.

The Tryal was a Spanish ship carrying cargo and slaves on their way to Lima to be sold. The slaves had already experienced a long and arduous overland trip from their home in Senegal, and included women and children in the group. At 3 am on 27 December 1804, in an act of desperate defiance, the slaves, who slept on deck, overtook the ship. They surprised the sleeping crew, killed 18 of them, and took control. The following two months saw terrible conditions, further conflict and death, until it was agreed by the lead mutineer Mure, and Captain Cereno, that the ship would sail to Senegal. The Tryal would then be returned to the captain and remaining crew.

It was while stopping at Santa Maria for water, of which they were in critical need, that the Tryal encountered Delano’s ship. By all accounts, Tryal acted ‘very awkwardly’ when entering the harbour, yet despite uneasiness, Delano boarded Tryal and spent the day with them. He provided the desperately needed water, food and even sails from Perserverance.

However, it was clear to Delano immediately that all was not right on board Tryal. In both his, and Melville’s fictional version, the relationship between the slaves and the very few remaining crew members did not fit the normal pattern. Captain Cereno seemed particularly deferential to Mure, the lead rebel who was acting as Cereno’s personal attendant. Cereno also showed great leniency to the hostile behaviour exhibited by the slaves towards the Spanish crew members. This disturbed Delano. He left, unimpressed with Cereno and the way he ran his ship. It was only on leaving the ship that all became clear. As Delano boarded his rowboat to return to Perserverance, Captain Cereno leapt off the Tryal into the sea after him. He was frantic in his despair, and called back to his crew to jump ‘overboard if you can swim! The rest to the rigging!’

Once Cereno and his escaped crew were on board Perserverance, the slaves did not have a chance to gain their much sought after freedom. The Tryal was retaken by the crew of the Perserverance, with Delano recording that ‘I told them, never to see my face again, if they did not take her’. A court trial was held in Lima where Cereno and Delano gave evidence. The main ‘offenders’ of the mutiny were hanged and later decapitated, and others of the group were placed in chain gangs or relocated.

All this would have remained just a single chapter in Delano’s book, casually placed between his discussion of the glow worms of St Maria Island and his visit to the Galapagos, if Melville had not come across it. As it turned out, Melville’s short story, ‘Benito Cereno’, has become a text that is often used to promote a discussion of the issue of slavery. Melville’s characters of Cereno, Delano and ‘Babo’ (Mure in Delano’s account) have been subjected to numerous interpretations. Melville’s account has also ensured that this incredible saga of desperation and futility is not forgotten.

Mutineers are so often cast in the role of the villains, overthrowing the necessary order of things for self-gain. But life at sea back then was incredibly difficult, more so if you were a slave en route to a life of captivity and brutality. There really was nothing to lose and seemingly everything to gain, no matter how small. So if the chance to change your destiny arose, it must have seemed a chance well worth taking.

Read more about the story of Tryal at The Chronicle of Higher Education.

View all posts by Myffanwy Bryant→
Posted in: History and Colonisation
↑