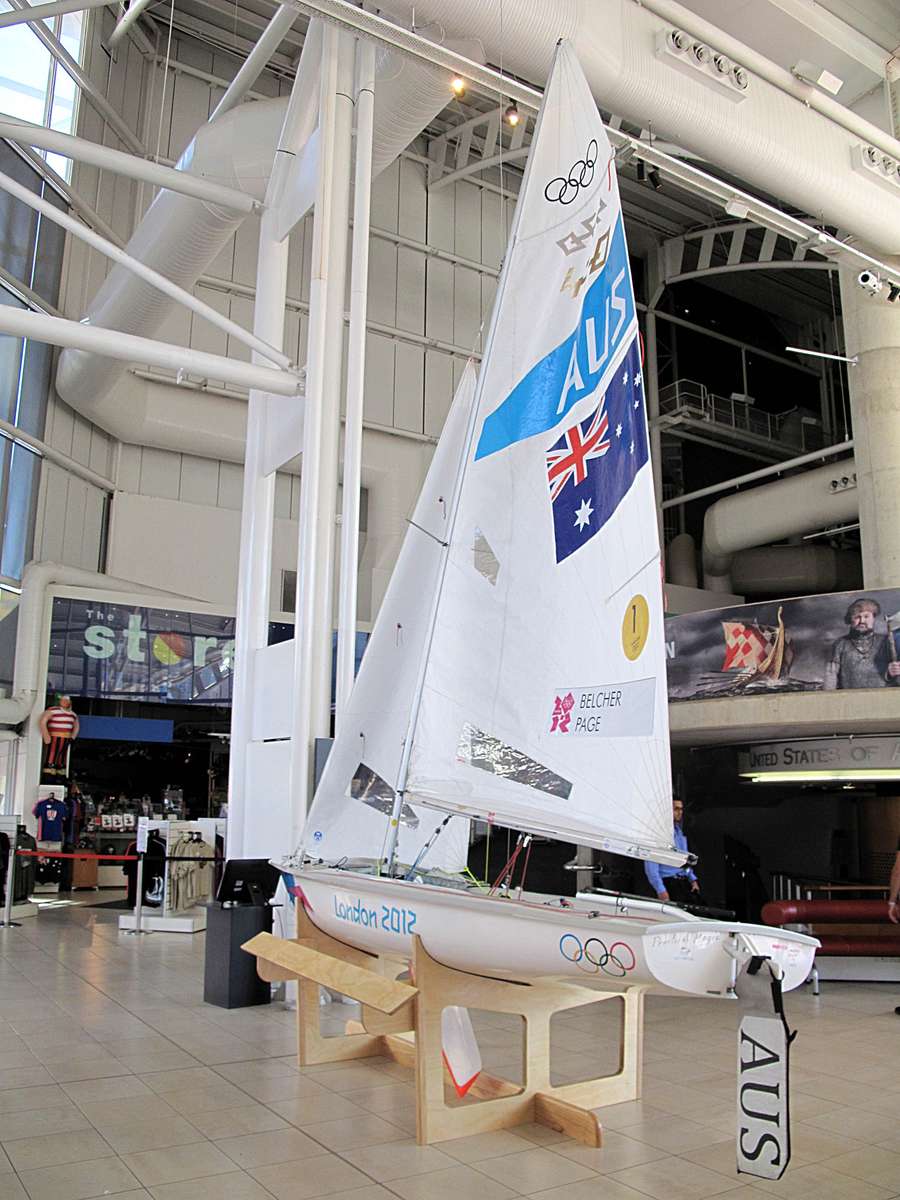 PRACTICAL MAGIC in the entrance foyer of the museum. Photo : Janine Flew

Australian Olympic sailing reached an amazing peak at the 2012 Olympics, with the team of sailors claiming three gold medals and one silver medal, making Australia the most successful nation in the sailing events, and rescuing what was at that point becoming a poor overall Australian Olympic team performance. One of the gold medal winning boats will be on display at the museum from early February until late April 2014, it’s the 470 class dinghy Practical Magic – sailed by Mathew Belcher and crew Malcolm Page OAM. 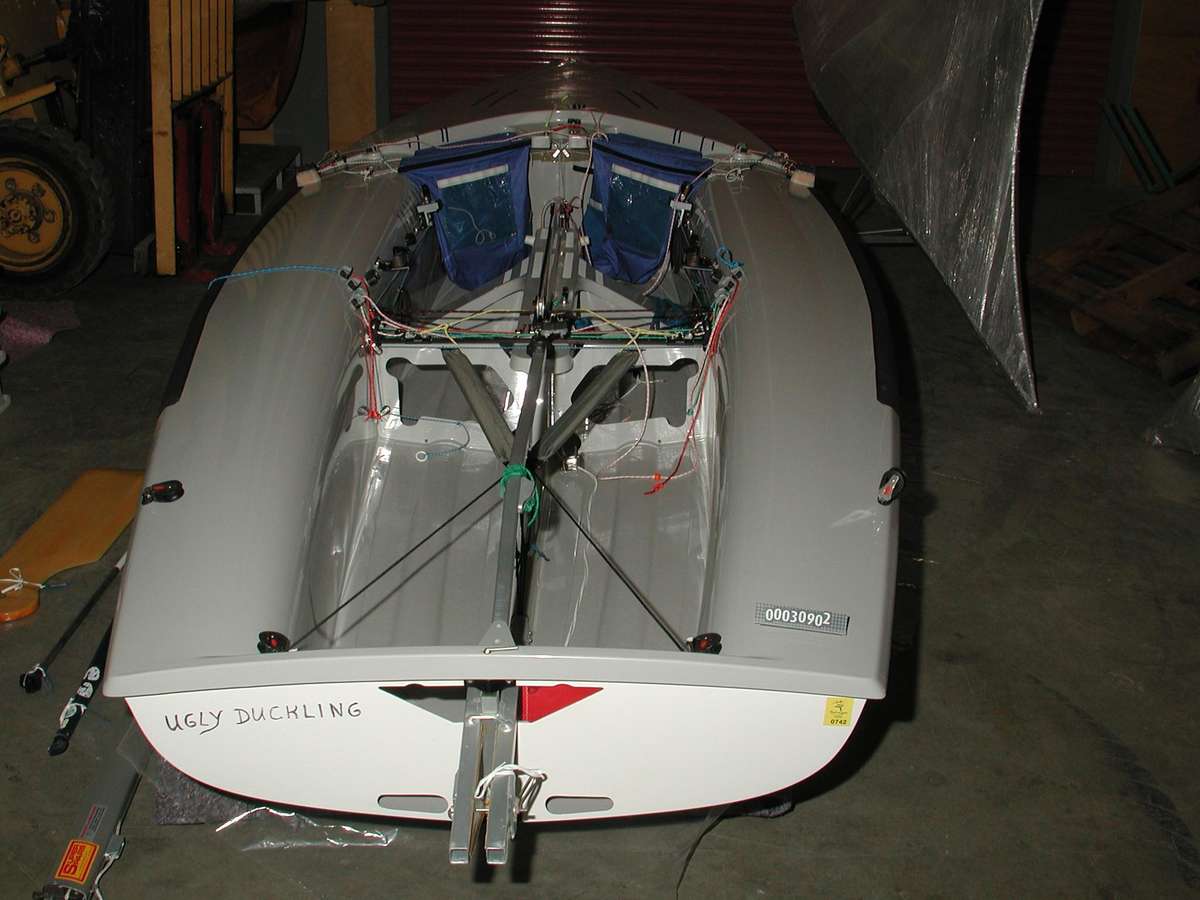 Two other gold medal winning boats are featured on the Australian Register of Historic Vessels, the museum’s online database of historic Australian craft. One of these is Ugly Duckling HV000361. It is also a 470 class dinghy, and at the Sydney 2000 Olympics won Australia’s first gold medal for women’s sailing events. Out on the harbour, sailing in a typical Sydney north east breeze in sunny conditions Jenny Armstrong and Belinda Stowell wrapped up the gold medal with a commanding performance in the final heat, watched by crowds on the shoreline in a spectacular scene. This scene was repeated an hour or so later when the men’s 470 team Tom King and Mark Turnbull sailed an equally impressive race on the same course to also win the gold for Australia. Two gold medals in one afternoon and a landmark in Australia’s proud record of racing in that class.

The 470 class was introduced in 1976 at Montreal where Australia’s crew, Ian Brown and Ian Ruff sailing Hocus Pocus, secured a bronze medal in their first Olympics. But the 2000 Olympics double gold in the 470s introduced Australia to the superb coaching by Ukranian born sailor and coach Victor Kovalenko. In 2008 at Athens, under his guidance Australia repeated the double gold in the men’s and women’s 470 class, Elise Rechichi and Tessa Parkinson won the women’s event, while Nathan Wilmot and Malcom Page won the men’s series. With Victor as head coach in 2012 it was three gold and a silver overall for the team. 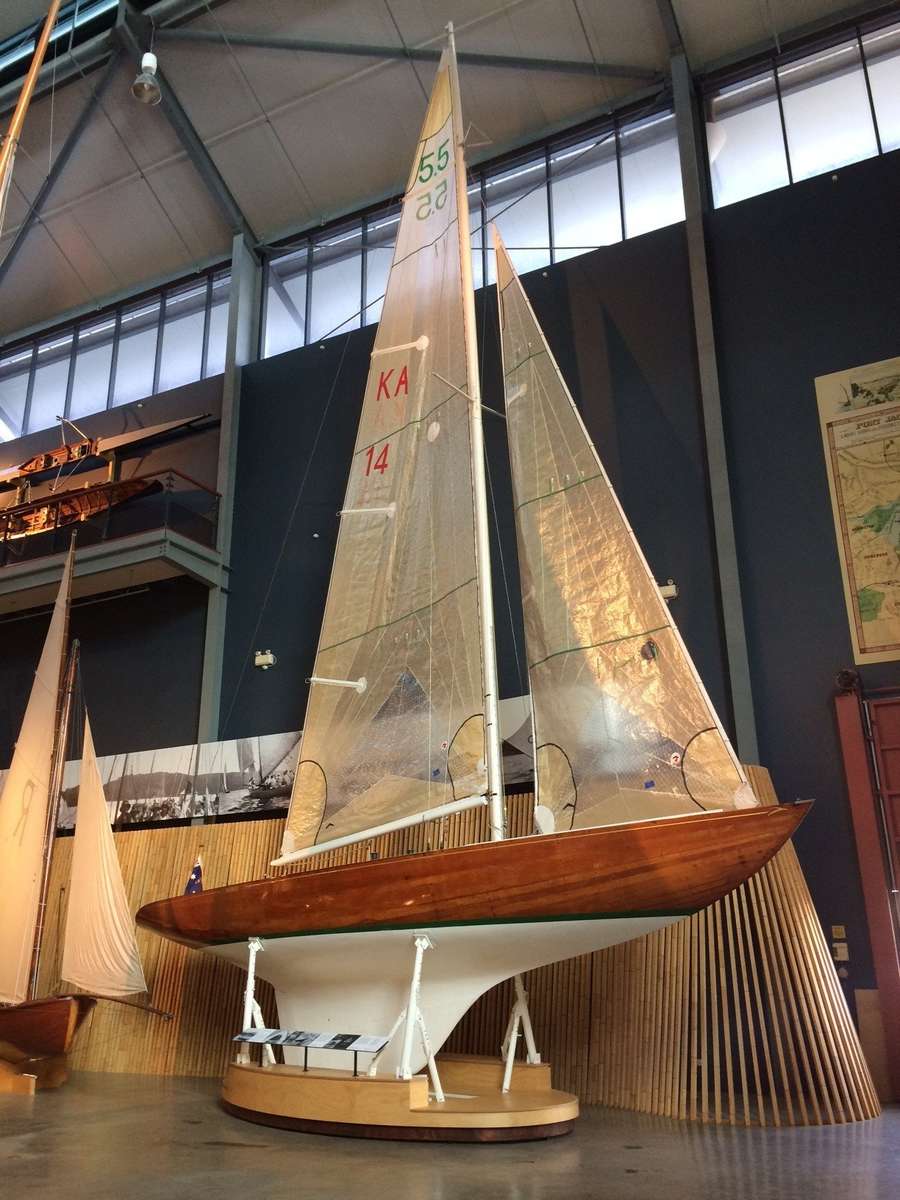 
Australia’s first medals for sailing were at the 1956 Melbourne Olympics where Roly Tasker won silver and Jock Sturrock won a bronze medal. Australia’s winning ways began in the 1964 Tokyo Olympics, when Barranjoey outclassed a strong field in the 5.5 metre class to claim gold for the crew of Bill Northam, Dick Sargeant and Peter O’Donnell. Northam was 59, a grandfather of five and he brought as sense of fun and gamesmanship to his contest. Considered too old by many, he had Barranjoey designed and built for the event, and teamed with a young and skilful crew, ‘Pod’ O’Donnell and Dick Sargeant to beat more fancied crews in the Australian trials. The gold medal was in the balance right up the last leg of the final race, with Barranjoey finishing 4th and their main rival from the USA disqualified as he fought desperately to win on the finish line. It captured the imagination of the Australian public and was a hugely popular win. Barranjoey is listed on the ARHV (HV000061) and is also on display in the Wharf 7 Heritage Complex adjacent to the main museum building.