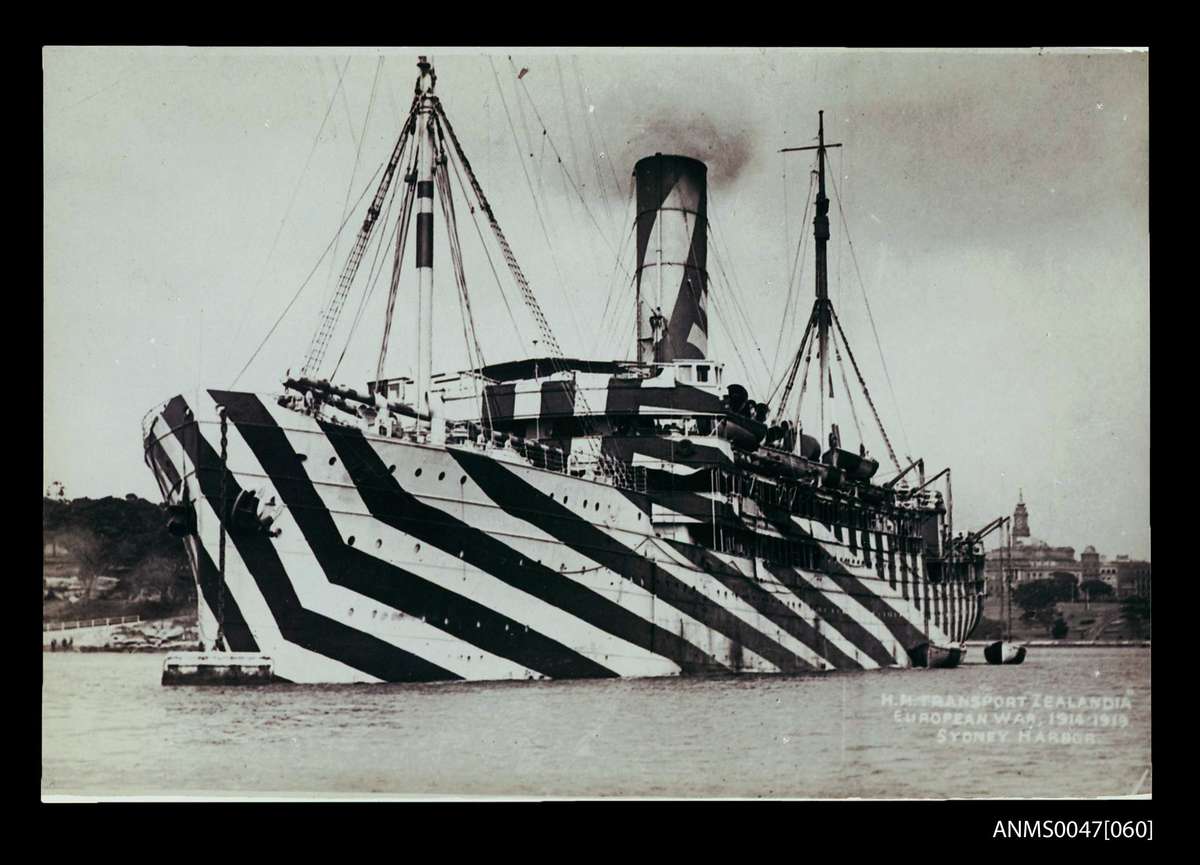 The HMT ZEALANDIA in Sydney Harbour in her dazzle paint. ANMS0047[060]

We often see WW1 through a black and white lens. Images of trench life, battle scenes and soldiers are always shades of grey. The endless mud is never brown, the blood is not red and the uniforms of both sides are the same indistinguishable colour. So it was with some surprise when I came across some plans for the painting of Allied ships whilst looking at the unique “dazzle” defence of ships during the war.

Although the detection of ships was still based on sight during the war, it was impossible to disguise a ship from enemy forces. Despite attempts as early as 1914 to address the problem, it was British artist Norman Wilkinson who developed and advocated the idea of not trying to hide ships but to utterly distort them. In effect to “razzle dazzle” the enemy. The theory was that if the Germans could not accurately gauge the ships size, speed and dimensions through their periscopes, then it would be much more difficult for them to fire accurately. In order to achieve this, Wilkinson devised a plan that in its essence believed that the contrasting colours, bold shapes and clashing patterns would distort the ship’s outline and proportions, especially when the ship was moving through the water.

Wilkinson had been a successful maritime painter in the traditional style before the war and despite his theory having never been tested he became head of the newly created Camouflage Unit of the British Navy. And so it was that by the war’s end, over 4000 merchant ships and 400 naval vessels had in a way become the largest canvases the world had seen. Indeed so appealing and modern were the geometric patterns that Picasso and the Cubists claimed credit for its inception as did the art movements of the Vorticists and Futurists who also saw their influence in the bold designs. The United States followed suit and many known modern minded artists of the time were part of the division involved with the designs.

When looking at images of ships in their “dazzle” disguise now it is difficult to believe that such a scheme was so widely accepted, especially when you look at the coloured plans. No shades of greys or blues here but rather bright yellows, oranges, reds, pinks and black. In an era of harsh brutality these brightly patterned ships are quite beautiful. Whilst there was never any conclusive evidence that the scheme did or did not work, it certainly makes for a moment in time when the vibrancy of modern art joined with geometric theory in defence of a common foe.

View all posts by Myffanwy Bryant→
Posted in: From the collection , Navy and defence
↑