After winning the 1931 Melbourne Cup, the famous horse Phar Lap, was transported to the United States by ship to compete in the Agua Caliente Handicap in Mexico. 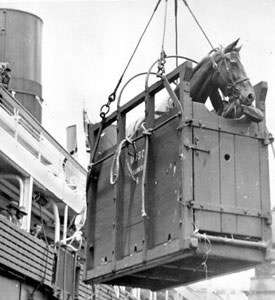 Phar Lap being shipped to America

Jointly owned by Sydney trainer Harry Telford and American businessman David J. Davis, Telford did not agree with the decision to move the horse overseas and refused to go. Davis took the horse regardless, along with new trainer, Tommy Woodcock. Phar Lap was loaded onto the ship Ulimaroa to New Zealand, before boarding the Monowai to San Francisco. It was reported the horse would become anxious when his trainer was not in sight, making the trip a long one for Woodcock, who was required to stay by his side the entire journey. On arrival in Mexico, Phar Lap won what was to be his last big race, before succumbing to either sickness or poison (or a combination of both) and dying in California months later.

Of the trip, Woodcock, via the The Mercury newspaper (Tasmania, 1936) stated,

…a special box was built for him on the upper deck. It was approximately 14ft. x 14ft., and padded to guard against his knocking himself. He had a space between his box and a sand roll, and by walking him into his box, turning round and walking him to the roll and vice versa, he had good room for exercise.

Woodcock went on to describe how the ships cook had complained that he had never gone through so much sugar in one trip – the passengers had been taking it to feed Phar Lap and in the process making a new friend on the journey.

Transporting a multimillion dollar racehorse by ship on a two month journey across open ocean was a risky venture, but it was not uncommon at this time. Humans have long held a special bond with horses.  Throughout history they have been an important part of daily life as food and transport, an indication of social status and wealth, and used in companionship and sport. The practice of transporting horses over water for breeding, sport, trade and war possibly spans more than 4000 years, and with some estimates being closer to 6000, we’ve certainly had a lot of practice.  Clearly the effort taken has been deemed worth it, and at times necessary.

During the middle ages, transporting horses by ship was common, as written and other evidence such as the Bayeaux tapestry, show. Vikings used various breeds of horses and it is beileved they shipped what are now known as Icelandic horses to Iceland in the 9th century (the museums current exhibition Vikings: Beyond the legend, dispels myth and delves into the daily lives of Vikings). However, there is mounting evidence to suggest the ancient Egyptians were already transporting horses by ship along the Nile and along the coast of the Aegean by the end of the 13th Dynasty (approx 1802BCE to 1649BCE) some two and a half thousand years earlier, having used them during wars with the Hyskos (often credited with introducing horses to Egypt, however, this is still debated).  Vessels used to transport horses and other livestock included boats and barges made mostly of reeds, not a particularly sturdy or safe method, and we can only assume voyages must have been treacherous. 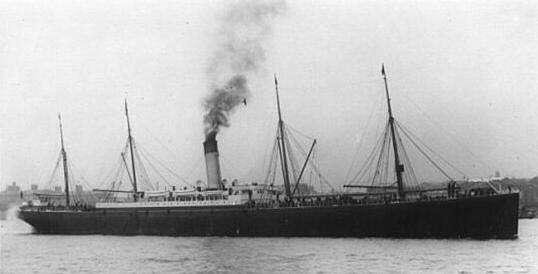 In more modern times, during the Boer War (1899-1902) and World War 1 the demand for horses was enormous, and thousands were lost at sea from shipwreck, sickness and injury from rolling vessels. During the Great War, lacking the numbers within the United Kingdom, the British looked to the United States for more. The horses were loaded onto transport ships by the hundreds and taken to the United Kingdom. Those that survived were loaded up again and taken to mainland Europe. Sailors and soldiers on these vessels reported the conditions as horrendous.  In one incident alone in 1915, 1400 horses were lost from one vessel, the SS Armenian, when it was torpedoed off the Cornish coast. Australia sustained its own losses – 121,324 Waller horses were shipped during WW1 from Australia to Europe, Africa, India and Palestine. Look out for the museums coming exhibition on The Royal Australian Navy in WW1, in August 2014. Any horses that survived the conditions on these journeys took several weeks to recuperate once on dry land. 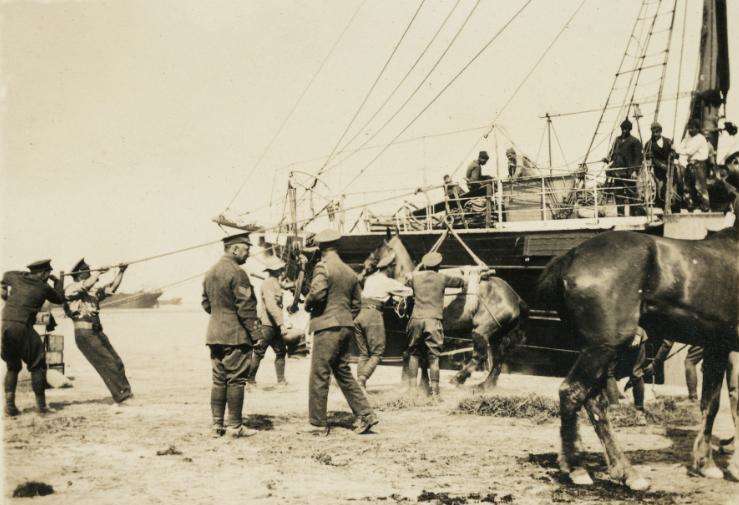 Today, horses are generally shipped by air and the risk to their wellbeing and the length of the trips have dramatically reduced. Fiorente, an Irish bred horse, was originally imported by air from England to race in the 2012 Melbourne Cup. She was unsuccessful, but came home strong this year to take out the 2013 Melbourne Cup.

• Hyland Ann, The Medieval Warhorse: From Byzantium to the Crusades, London: Grange Books. 1994

View all posts by ANMM Guest→
Posted in: Arts and Culture
↑