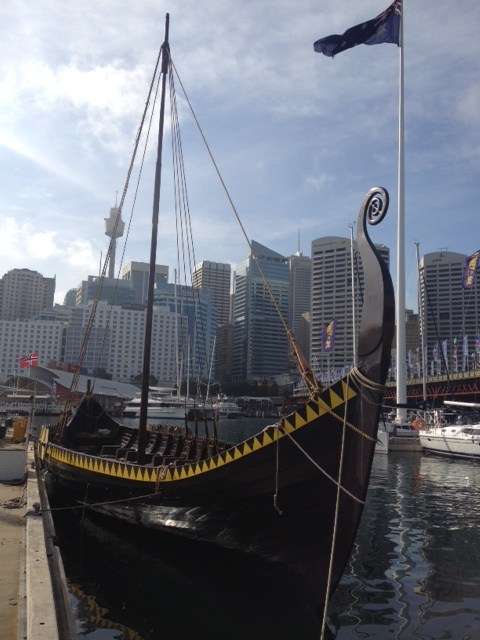 The Jorgen Jorgenson with the Oseberg style bow scroll in place.

The Viking age reconstruction vessel Jorgen Jorgenson is nearing completion in time for the opening of the Swedish History Museum–MuseumsPartner exhibition Vikings – Beyond the legend at the museum on 19 September. The opening event will see the longship rowed into the museum’s wharves, at night, with a complement of Vikings on board! 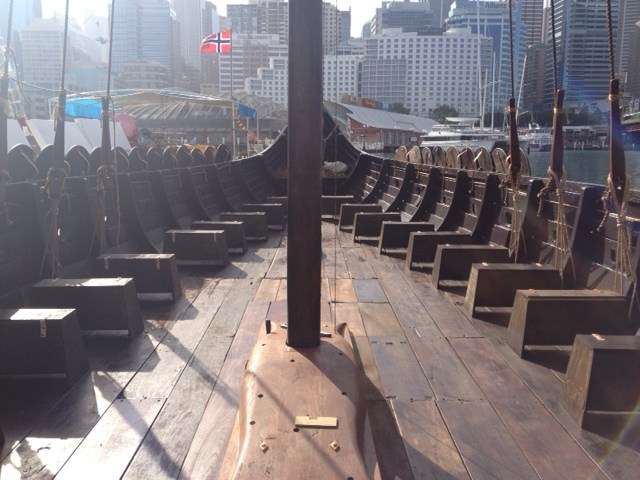 But where does the museum find Vikings? Fortunately, there are quite a number of them in Australia. The so-called Dark Ages, or Early Middle Ages (5th to 10th centuries), is quite popular among historical re-enactors in this country. In fact, it is more popular than the re-enactment of Australian history!

There are many groups of re-enactors that recreate and portray the clothing, food, jewelry, tools, weapons – in fact all the physical elements of daily life in the Viking age – for public education displays and performances. 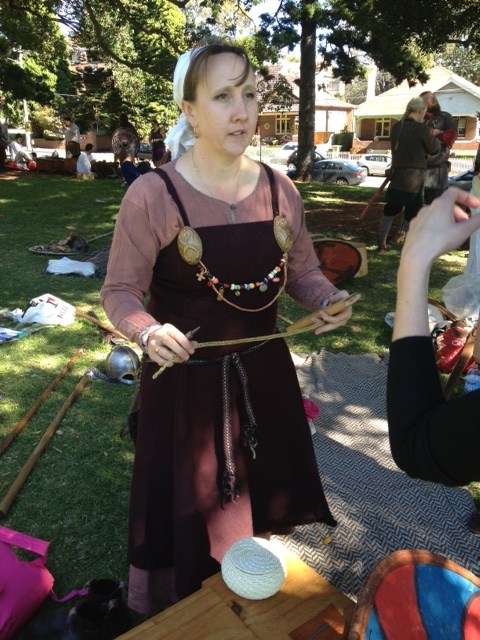 I have written elsewhere on why this period of history is popular among Australian reenactors. In broader terms, Vikings have an amazing resonance in popular culture around the world – albeit a nostalgic, fantasy version of Viking age history that often depicts Scandanavian cultures as simply pagan and warlike. This is a myth that this upcoming exhibition sets out to bust!

For many historical reenactors the Viking age is often something they choose to recreate precisely in order to portray a more nuanced and historically accurate version of the past, not at all well served by film and television. 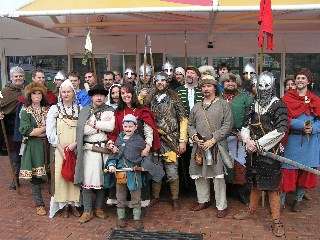 Viking age reenactors at the museum in 2006

Many Australian reenactors take their recreations very seriously. Some will only recreate replica artefacts from museums and archaeological finds. Others find interest in experimental archaeology – or the recreation of artefacts (such as Viking longships!) in order to learn more about how they functioned.

There will be several Viking age historical reenactment groups in attendance at the opening of the Vikings – Beyond the legend exhibition. Most prominent will be the New Varangian Guard. This group portrays the Vikings and Rus‘ who travelled to the Byzantine Empire in the Near East between the 9th and 13th centuries and became the Emperor’s Imperial Guard – a cross-cultural viking story that is not widely known. 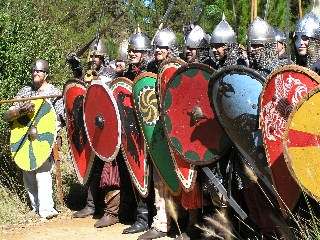 A few of the other Viking age historical reenactment groups in Australia include the Huscarls, Fire and Steel and NEMAS. NEMAS, or the New England Medieval Arts Society, host a bi-annual gathering of Dark Age reenactors in a pine forest in Armidale replete with long-house, village markets, feasting and of course fighting.

In previous posts we have seen some excellent Viking age artisans who make hand-made replica Viking artefacts. There are others who make jewelery, clothing and arms and armour among other things.

These (mostly Australian) warriors representing the Anglo-Saxon King Harold’s elite troops called Huscarls at the reenactment of the 1066 Battle of Hastings in England in 2006 are wearing hand made clothing and armour. The historical battle was fought just after Harold beat a Viking invasion force at Stamford Bridge. At Hastings the invaders were Normans – French descendants of ‘Norse men’.

Of course while many Viking age historical reenactors take the combat side of things very seriously, at times such as this television commercial, they have some serious Viking fun! 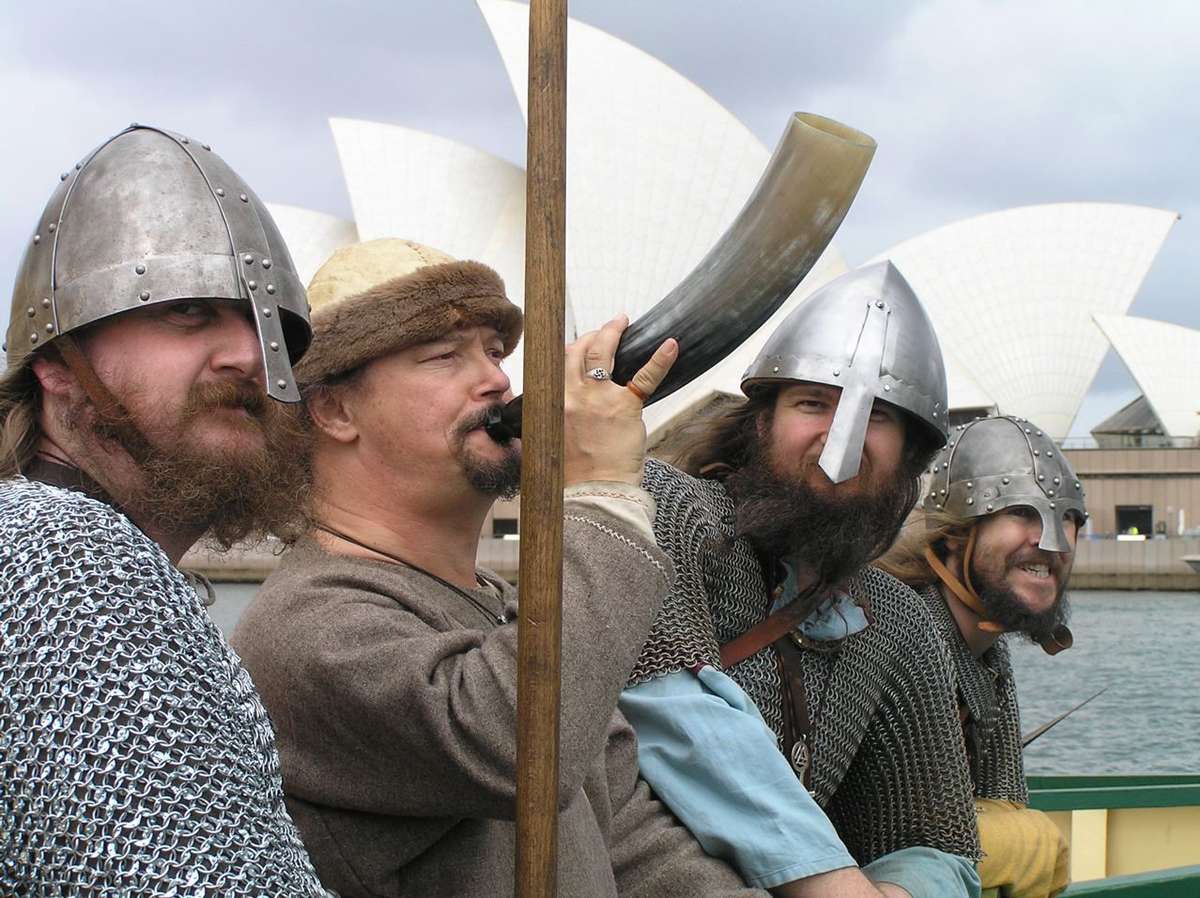 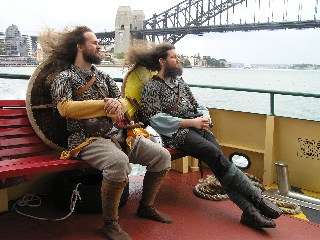 A bad hair day for the Vikings

View all posts by Stephen Gapps→
Posted in: Exhibitions , Vessels
↑