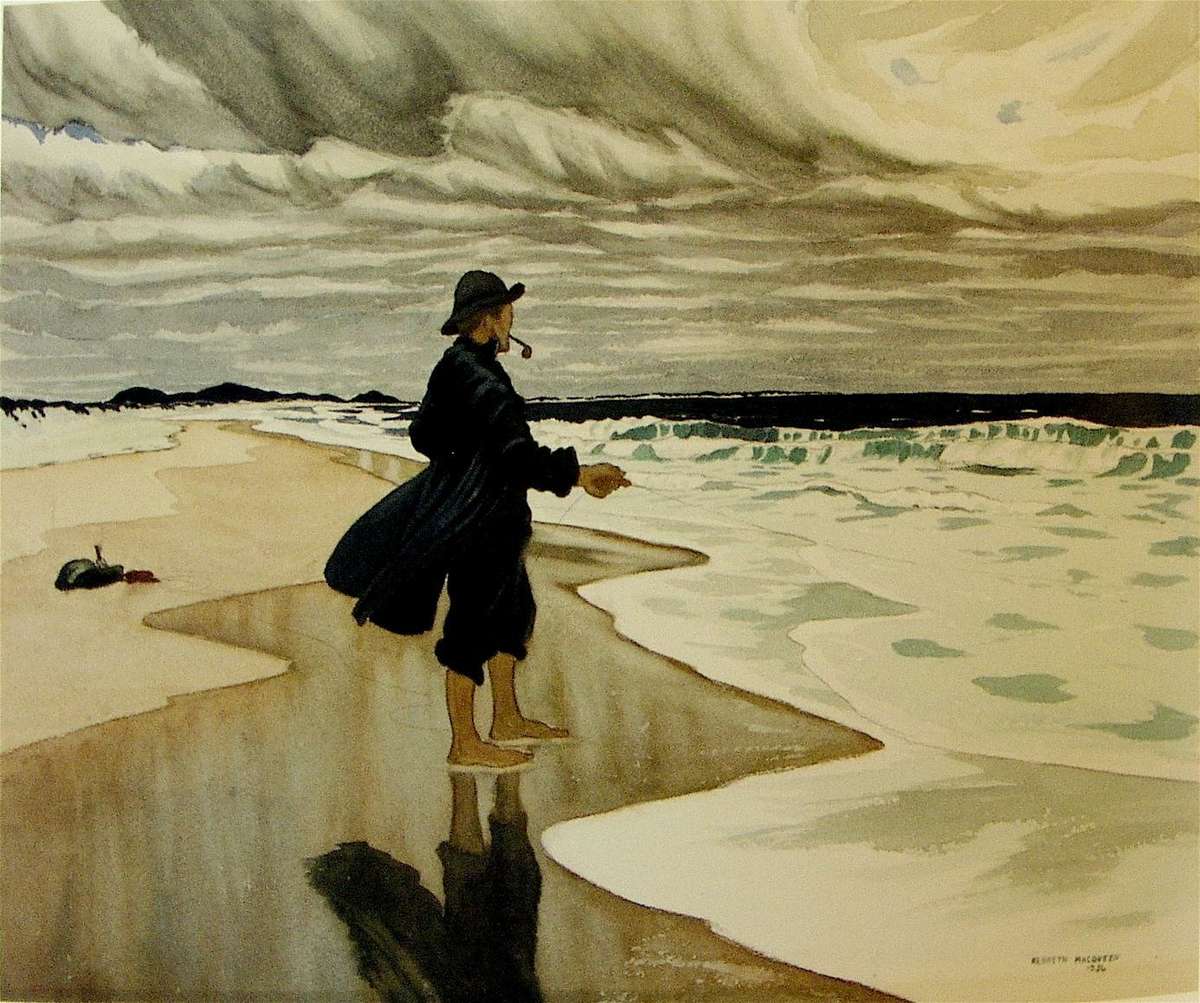 There’s something ambient about Kenneth Macqueen’s The Beach Fisherman, 1934. A man stands barefoot on a beach, fishing line in tow, with the shore stretching out further than the eye can see and the clouds threatening rain in a decidedly gloomy way. This is one of the many artworks on display at the museum’s Fish in Australian art exhibition.

Kenneth Macqueen was born in 1897 in Ballarat, Victoria. After completing schooling in Sydney and serving in the Australian Imperial Force during World War I, he studied art at various institutions in London. He became a member of the Contemporary Group, a collection of modern Sydney painters formed in 1926 by famous artists George Lambert and Thea Proctor. From the 1930s to the 1950s, he displayed his work in various group and solo exhibitions. Concentrating on watercolour painting, Macqueen was known for his ability to create intense colour in a way that added a rhythmic quality to his vibrant landscapes.

This can be seen in The Beach Fisherman, one of his most memorable works. Colour is arranged in such a way that the texture of the sand and sea is accurately represented, an effect rarely achieved in watercolour painting. There is an emphasis here, not so much on the end result, but on the act of fishing and its potentially calming quality. The focus is on the character of the fisherman. Our eye is first drawn to his figure, dressed in black, starkly contrasted to the white of the shore and light brown colours of the sand. An outline surrounding the fisherman’s feet is visible where the sand moves with the pressure of his weight, along with his crystal clear reflection. The shore barely reaches his feet and we can see the line where the water has recently touched the sand. This seems to create a sense of intimacy between the fisherman and the sea, a relationship that is made all the more palpable through the fact that he remains the only figure on the beach.

In one moment, Macqueen has captured the essence of fishing. The fisherman stands in solitude, contemplatively peering out into the sea, patiently waiting for that highly sought after prize to tug on the line and spring out of the water.

View all posts by Nicole and Penny→
Posted in: Exhibitions , From the collection , Arts and Culture