In what situation do you think you would find yourself reflecting on the importance of the humble door? In the collection of the Australian National Maritime Museum is a handwritten poem titled 'Doors' that begins with these lines:

Some doors have hearts it seems to me, they open so invitingly;

You feel they are quite kind – akin, to all the warmth you find within

Some doors so weather-beaten, gray.  swing open in a listless way

As if they wish you had not come, their stony silence leaves you dumb.

In 1938 in Vienna, Austria, the poem’s author can see the world darkening with war. Arthur Lederer, a Jewish tailor and owner of a business that created ‘gala uniforms’ for European royalty and high society, makes the difficult decision to uproot his family and leave their home as anti-Jewish sentiment continues to rise.

In November 1938 Arthur, his wife Valerie and their son Walter made an attempt to flee the escalating Jewish persecution in Nazi-occupied Austria. However on the border with Czechoslovakia the family was stopped by the German Gestapo and were thrown into jail. Upon their release three days later, the Lederers returned to Vienna.

Four weeks later the family left their home and again attempted to escape Austria. This time they successfully travelled to Prague where the League of Nations issued them with Nansen passports, internationally recognised identity cards that were provided to stateless refugees.

In Prague, their fate in suspension, Arthur Lederer wrote letter after letter to many of his influential and well-connected former clients. He wrote to kings, princes, diplomats and aristocrats appealing for assistance. Despite writing several letters a day, none of his contacts were willing or able to help him find exile in another country. The ANMM holds several examples of this correspondence, which makes for interesting reading. A letter written from a diplomat in Paraguay expresses disappointment at not being able to assist, while a postcard from family in Prague contains a request that the Lederers cease contact out of fears for their safety.

With all of these doors closing, one finally opened. Help came in the form of Countess Sehern-Thoss, a wealthy former client who placed Arthur in contact with English aristocrat Lady Max Muller. Through the Quaker relief organisation Germany Emergency Committee, Lady Muller arranged to pay the family’s fare to Australia as well as the £300 arrival money required by the Australian Government. In June 1939, the family began their journey to their new home, Australia.

Oh may mine be a friendly door, may all who cross the threshold o’er,

Within find sweet content and rest, and know each was a welcomed guest.

Arthur Lederer wrote his poem 'Doors' on board SS Orama as the liner wound its way to Australia. The long hours of the voyage, with his wife and son by his side, provided him with ample time for reflection. In this family’s experience doors were significant; the door of an abandoned home, the impenetrable door of a gaol cell and all the doors that had coldly closed in response to their pleas for assistance.

The poem contains the agony of the exiled, of those who have been turned away. In light of his experience Arthur Lederer’s wish is simple; a door, a home in which no one would feel cast out or unwelcome. 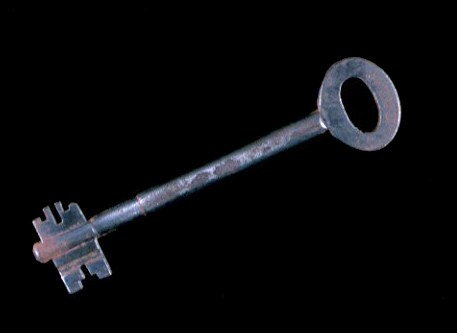 On leaving Austria, the Lederers had left almost all their belongings behind, taking with them only the slightest personal possessions. Interestingly, Valerie Lederer chose to take with her a very simple item. The front door key to their home in Vienna, an object she kept with her as she built her new life in Australia, as a reminder of the home that had been.

For more information and to view other objects relating to the Lederers, please head over to our eMuseum site.