This hand crocheted cotton tray cloth or antimacassar was produced to commemorate Australia’s involvement in the Dardanelles campaign of World War I. It depicts a naval ship flanked by two Union Jacks, and the phrase ‘DARDANELLES / 1915 / OUR HEROES’. Crocheting patterns like this appeared in many women’s journals and magazines during World War I such as Australian Home Journal, Australian Woman’s Mirror, and Woman’s Budget. A variety of uses and patterns were supplied – milk jug covers, pillowcases, bedspreads, table runners, table cloths – all with similar patriotic designs. The maker of this particular piece is unknown. Similar examples are held in the Australian War Memorial and Powerhouse Museum collections. 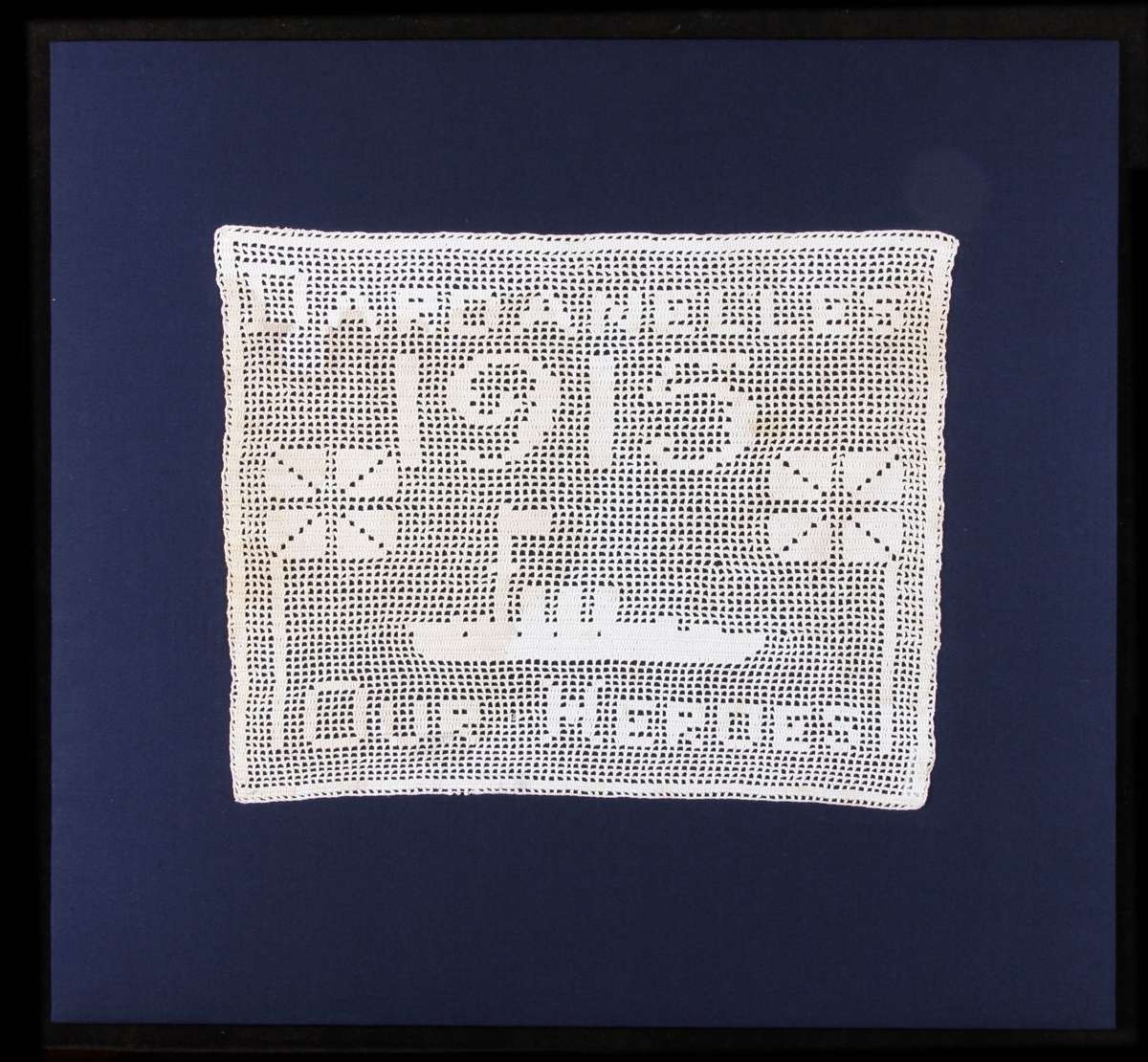 The crocheted piece represents the patriotism felt by the Australian community for Australia’s involvement in the Allied attempt to capture the Dardanelles in World War I and the consequent Gallipoli Campaign.

Initially the Dardanelles campaign was a naval operation to capture the Dardanelles (the strait in Turkey connecting the Aegean Sea to the Sea of Marmara) from Turkish defences, allowing Allied naval forces through to disrupt shipping and capture Constantinople – the capital of the Ottoman Empire and an ally of Germany. Despite the success of the Royal Australian Navy submarine AE2 breaching Turkish defences in the Dardanelles on 25 April 1915, the Allied forces were unsuccessful in forcing their way through the heavily defended strait and sustained heavy losses.

In a new plan, British, French, Australian and New Zealand troops invaded and attempted occupy the Gallipoli Peninsula in April 1915, in the hopes of eliminating the shore-based Turkish defences and opening the Dardanelles to the Allied navies. Australian forces landed at what is now known as ANZAC Cove on 25 April 1915, and despite attempts at breaking through Turkish lines in the early days, the campaign resulted in a stalemate until the evacuation of troops in December. The Gallipoli campaign ended in Allied defeat with over 140,000 Allied casualties, more than 44,000 of whom died.

Other items relating to the Dardanelles and Gallipoli campaigns are now on the Australian National Maritime Museum’s on-line collection.