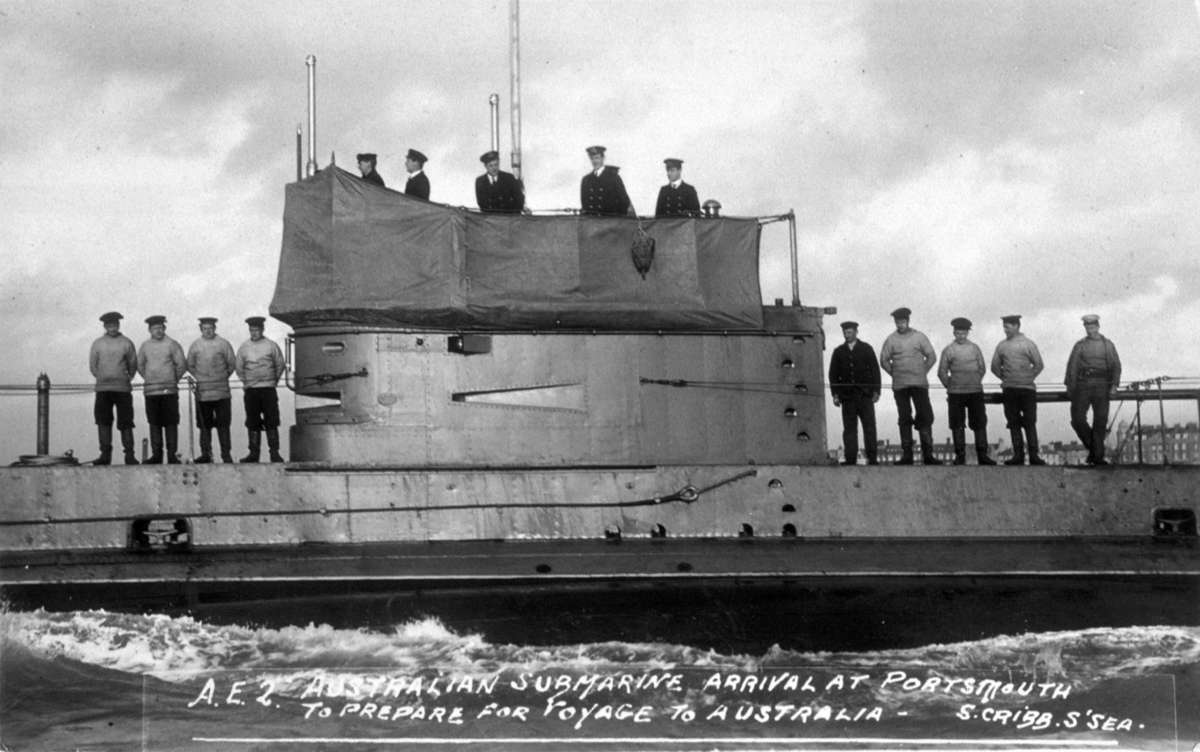 AE2 at Portsmouth preparing for the voyage to Australia in 1914

With Remembrance Day coming up on Friday 11 November, it’s a good time to look at one of the Royal Australian Navy’s successes in World War I.

AE2 was an E class submarine (previous classes were A, B, C and D) – one of two ordered in 1911 by the Australian government for its fledgling navy – the very finest of the day.  The A stood proudly for Australia and our two submarines AE1 and AE2 were commissioned at Portsmouth in February 1914.  AE1 was lost with all hands off German New Guinea in September 1914 and AE2 was scuttled by the captain in May 1915, after being hit by enemy shellfire while attacking Turkish ships in the Sea of Marmara. AE2‘s story is full of action and heroic deeds.

AE2 was under the command of LCDR Henry H G D Stoker, Royal Navy and, accompanied by AE1, reached Sydney on 24 May 1914 manned by Royal Navy (RN) officers, with a mixed crew of RN and RAN sailors.
At the outbreak of World War I, both submarines mobilised as part of the Australian Naval and Military Expeditionary Force (ANMEF) sent to secure German New Guinea and other German possessions in the Pacific.  With German surrender successfully achieved within a matter of weeks, AE2 returned to Sydney via Suva, and went on to Albany in Western Australia.  On 31 December 1914, it was towed from Albany by SS Berrima as part of the troop convoy across the Indian Ocean, arriving at Port Said on 28 January 1915.  Stoker then received orders to join the RN’s 2nd Submarine Flotilla based at the island of Tenedos. 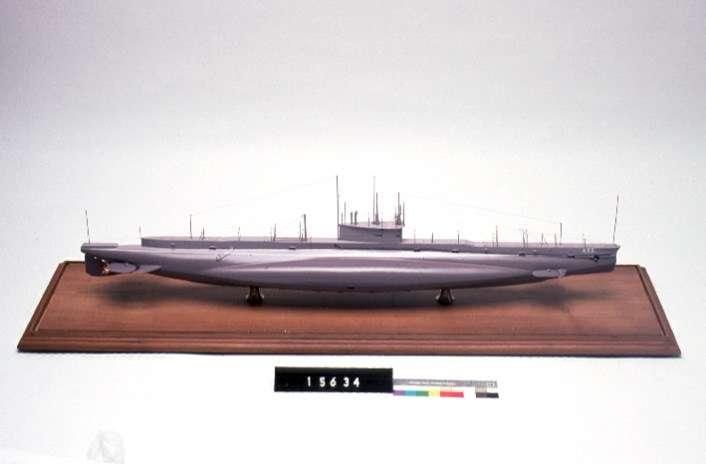 The museum's model of AE2

As part of the naval operations during the Dardanelles/Gallipoli Campaign, AE2 made its first offensive foray into the Dardanelles on 24 April, penetrating nearly six nautical miles (11 km) before being forced back with mechanical problems.

At 2.30 am on 25 April 1915 AE2 again attempted to get through the strait.  At approximately 4.30 am, Stoker dived the boat in response to fire from Turkish gun crews that had spotted her.  By 6.00 am, AE2 had reached Chanak, at the narrowest part of the strait, and then fired a torpedo at the Turkish gunboat Peyk I Sevket, while simultaneously taking evasive action to avoid an enemy destroyer.  During this action, the boat ran aground directly under one of the Turkish forts; fortunately the fort was unable to lower its guns far enough to hit AE2 and after four minutes in an exposed position on the bank, it slid back into deeper safer water.

Shortly after grounding a second time, AE2‘s periscope was sighted by a Turkish battleship firing over the peninsular at British positions on Cape Hellas, causing it to cease shelling, withdraw and relocate to a safer position.  AE2 continued to advance toward the Sea of Marmara.  At 8.30 am Stoker decided to rest the boat on the sea-floor during daytime, and attack at night – which he successfully did, becoming the first Allied submarine to breach Turkish defences in the Dardanelles.  Stoker signalled his success to HQ, where discussions were being held about the possibility of retreat by re-embarking the land force, but the news of AE2’s success changed attitudes to the extent that talk of withdrawal ceased.  Stoker received orders to attack as he saw fit. His tactics were to give the impression that several submarines were in the area, however, due to mechanical problems, and in spite of several attacks, AE2 managed to create mayhem but no hits on Turkish vessels.

On 30 April, mechanical problems caused AE2 to rise to the surface; about 1 mile (1.8 km) from the Turkish torpedo boat Sultanhisar.  In an attempt to avoid it, AE2 dived below a safe diving depth; frantic and hasty attempts to correct this caused the submarine’s stern to break the surface, which was immediately fired on again by the Sultanhisar.  Stoker ordered his crew to abandon the submarine and, destroying sensitive documents and opening the sea cocks, AE2 sank to the bottom.  All 35 members of the boat’s company survived the action, although three men died during the three and a half years they subsequently spent as prisoners of war in Turkey.

The wreck of AE2 was located in 1998 at a depth of 72 m and is now the subject of a joint Australian-Turkish project – Silent ANZAC – which aims to protect the remains from future damage and to promote the history of this daredevil submarine.

View all posts by Lindsey Shaw→
Posted in: From the collection , Navy and defence
↑