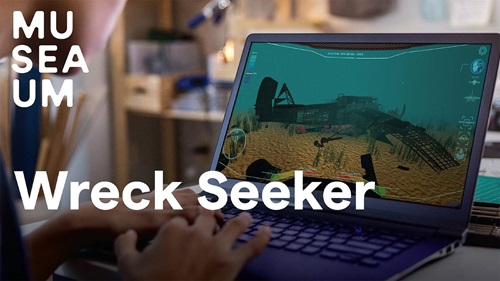 Digital gaming experience brings maritime archaeology to life for next generation of explorers.


Wreck Seeker is an online game where players take the role of a modern maritime archaeologist hunting for some of Australia’s most prized shipwrecks.

It is the third online learning game produced by the Australian National Maritime Museum following The Voyage (2015) and Cook’s Voyages (2020).

In it players will research, hunt for and explore the final resting places of six semi-fictionalised wrecks from across Australian waters and around the world.

As a maritime nation, shipwrecks hold a special place in the minds of Australians. Further, given the complexity of uncovering what lies beneath the surface of our oceans and seas, much mystery persists. Given these factors the topic is fertile ground for a video game.

It is designed for middle-school students (10-15 years old) and is a tool for undertaking meaningful classroom conversations about historical enquiry, chronology, and source analysis. It has been developed to align with the curriculum for teachers and students undertaking HASS (Years 5, 6) and History/HSIE (Years 7, 8, 9, 10).

Wreck Seeker has been developed over three years and is a gamified learning platform that has a direct focus on helping teachers to explain, develop and refine student historical skills explored in the Australian Curriculum. Using the backdrop of 17th, 18th, 19th and 20th century wrecks, players will speak to historians, eye witnesses, local fisherman and other subject experts before deciding on which sources offer the most reliable information. Once complete they will overlay this research onto a map before diving, in 3D, on six beautifully recreated underwater environments to see if they’ve cracked the mystery.

Peter Tattersall, the museum’s Head of Learning said, ‘The capacity for gamified learning experiences to provide, meaningful educational outcomes is now well-established. This is as true for all ages from K – 12 education to tertiary, vocational and workplace learners. Well-designed games play an important role in engaging players not only with content, but also skill development and empathy building.’

‘Unique to videogames is the capacity to transport players into powerful scenarios while giving them agency to interact in these spaces and deal, in a realistic way, with the consequences of their actions. They also allow players to replay scenarios a number of times and refine their reactions and skills to reach a desired outcome.’

Kevin Sumption, Director and CEO said, ‘A side effect of the remote learning practices forced upon us during the COVD-19 pandemic has been a growing comfort with digital learning technologies from both teachers and students. At the museum we have seen this play out in the skyrocketing popularity of our online games and resources over the past 12 months. In terms of content, delivery and gamification, Wreck Seeker is the most advanced game we have produced.’

Kevin Sumption concluded, ‘The choice to focus on gamified learning experiences is a considered and important one for the museum that reflects the evolving nature of classroom learning in Australia. With three completed games the Museum is a global leader in this field among cultural institutions. Investment in online games has allowed the museum to reach students across the country (and the world) and has been a major contributor to the impressive growth of annual educational outreach from 65,000 to over 600,000 in a four year period.’

Wreck Seeker is produced by the Australian National Maritime Museum and developed by Roar Film with assistance from Screen Tasmania and Screen Australia.